Adrenalin ® is available as a single-use 1 mL vial and a multiple-use 30 mL vial for intramuscular and subcutaneous use.

Inject Adrenalin ® intramuscularly or subcutaneously into the anterolateral aspect of the thigh, through clothing if necessary.  When administering to a child, to minimize the risk of injection related injury, hold the leg firmly in place and limit movement prior to and during an injection.  The injection may be repeated every 5 to 10 minutes as necessary.  For intramuscular administration, use a needle long enough (at least 1/2 inch to 5/8 inch) to ensure the injection is administered into the muscle.  Monitor the patient clinically for the severity of the allergic reaction and potential cardiac effects of the drug, with repeat doses titrated to effect.  Do not administer repeated injections at the same site, as the resulting vasoconstriction may cause tissue necrosis.

Adults and Children 30 kg (66 lbs) or more: 0.3 to 0.5 mg (0.3 mL to 0.5 mL) of undiluted Adrenalin ® administered intramuscularly or subcutaneously in the anterolateral aspect of the thigh, up to a maximum of 0.5 mg (0.5 mL) per injection, repeated every 5 to 10 minutes as necessary.  Monitor clinically for reaction severity and cardiac effects.

Children less than 30 kg (66 lbs): 0.01 mg/kg (0.01 mL/kg) of undiluted Adrenalin ® administered intramuscularly or subcutaneously in the anterolateral aspect of the thigh, up to a maximum of 0.3 mg (0.3 mL) per injection, repeated every 5 to 10 minutes as necessary.  Monitor clinically for reaction severity and cardiac effects.

Injection into the anterolateral aspect of the thigh (vastus lateralis muscle) is the most appropriate location for administration because of its location, size, and available blood flow. Injection into (or near) smaller muscles, such as in the deltoid, is not recommended due to possible differences in absorption associated with this use.

Do not administer repeated injections of epinephrine at the same site, as the resulting vasoconstriction may cause tissue necrosis.

Do not inject into buttock. Injection into the buttock may not provide effective treatment of anaphylaxis and has been associated with the development of Clostridial infections (gas gangrene). Cleansing with alcohol does not kill bacterial spores, and therefore, does not lower this risk.

Do not inject into digits, hands, or feet. Epinephrine is a strong vasoconstrictor. Accidental injection into the digits, hands or feet may result in loss of blood flow to the affected area and has been associated with tissue necrosis.

5.2 Serious Infections at the Injection Site

Rare cases of serious skin and soft tissue infections, including necrotizing fasciitis and myonecrosis caused by Clostridia (gas gangrene), have been reported at the injection site following epinephrine injection for anaphylaxis. Clostridium spores can be present on the skin and introduced into the deep tissue with subcutaneous or intramuscular injection. While cleansing with alcohol may reduce presence of bacteria on the skin, alcohol cleansing does not kill Clostridium spores. To decrease the risk of Clostridium infection, do not inject Adrenalin ® into the buttock [see Warnings and Precautions (5.1)]. Advise patients to seek medical care if they develop signs or symptoms of infection, such as persistent redness, warmth, swelling, or tenderness, at the epinephrine injection site.

Other Patients and Diseases

Adrenalin ® contains sodium bisulfite which may cause mild to severe allergic reactions including anaphylaxis or asthmatic episodes in susceptible individuals. However, the presence of bisulfite in this product should not preclude its use for the treatment of serious allergic or other emergency situations even if the patient is sulfite-sensitive, as the alternatives to using epinephrine in a life-threatening situation may not be satisfactory.

Due to the lack of randomized, controlled clinical trials of epinephrine for the treatment of anaphylaxis, the true incidence of adverse reactions associated with the systemic use of epinephrine is difficult to determine. Adverse reactions reported in observational trials, case reports, and studies are listed below by body system:

Angina may occur in patients with coronary artery disease [ see Warnings and Precautions (5.3)].

Arrhythmias, including fatal ventricular fibrillation, have occurred, particularly in patients with underlying organic heart disease or patients receiving drugs that sensitize the heart to arrhythmias [ see  Warnings and Precautions (5.3)].

Patients with Parkinson's disease may experience psychomotor agitation or a temporary worsening of symptoms [ see Warnings and Precautions (5.3)].

Accidental injection into the digits, hands or feet may result in loss of blood flow to the affected area [ see Warnings and Precautions (5.1)]. Adverse events experienced as a result of an injection into these areas include increased heart rate, local reactions including injection site pallor, coldness, hypoesthesia, and tissue loss, or injury at the injection site resulting in bruising, bleeding, discoloration, erythema, and skeletal injury.

Injection into the buttock has resulted in cases of gas gangrene [ see Warnings and Precautions (5.1)].

Rare cases of serious skin and soft tissue infections, including necrotizing fasciitis and myonecrosis caused by Clostridia (gas gangrene), have been reported following epinephrine injection in the thigh [see Warnings and Precautions (5.2)] .

Epinephrine should be administered cautiously to patients taking other sympathomimetic agents because of the possibility of additive effects.

Patients who are concomitantly receiving cardiac glycosides, digitalis, diuretics, quinidine, and other antiarrhythmics should be observed carefully for the development of cardiac arrhythmias [ see  Warnings and Precautions (5.3) and Adverse Reactions (6)].

Administer epinephrine cautiously to patients receiving halogenated hydrocarbon general anesthetics, such as halothane, as coadministration may result in arrhythmias.

The effects of epinephrine may be potentiated by tricyclic antidepressants such as imipramine, monoamine oxidase inhibitors (MAOI), levothyroxine sodium, and certain antihistamines, notably diphenhydramine, tripelannamine, and dexchlorpheniramine.

The cardiostimulating and bronchodilating effects of epinephrine are antagonized by beta-adrenergic blocking drugs, such as propranolol.

The vasoconstricting and hypertensive effects of epinephrine are antagonized by alpha-adrenergic blocking drugs, such as phentolamine.

Ergot alkaloids may reverse the pressor effects of epinephrine.

Epinephrine should not be used to counteract circulatory collapse or hypotension caused by phenothiazines, as a reversal of the pressor effects of epinephrine may result in further lowering of blood pressure.

There are no adequate and well-controlled studies in pregnant women. Epinephrine should be used during pregnancy only if the potential benefit justifies the potential risk to the fetus (fetal anoxia, spontaneous abortion, or both). Epinephrine is teratogenic in rabbits, mice and hamsters dosed during organogenesis.

Epinephrine has been shown to have teratogenic effects (including gastroschisis and embryonic lethality) when administered subcutaneous in rabbits at approximately 15 times the maximum recommended intramuscular or subcutaneous dose (on a mg/m 2 basis at a maternal subcutaneous dose of 1.2 mg/kg/day for two to three days).

In hamsters, teratogenic effects were observed at approximately 2 times the maximum recommended intramuscular or subcutaneous dose (on a mg/m 2 basis at a maternal subcutaneous dose of 0.5 mg/kg/day for 4 days).

Use with caution during labor and delivery. Although epinephrine improves maternal hypotension associated with anaphylaxis, it may result in uterine vasoconstriction, decreased uterine blood flow, and fetal anoxia.

Clinical use data support weight-based dosing for treatment of anaphylaxis in pediatric patients, and other reported clinical experience with the use of epinephrine suggests that the adverse reactions seen in children are similar in nature and extent to those both expected and reported in adults.

Overdosage of epinephrine may produce extremely elevated arterial pressure, which may result in cerebrovascular hemorrhage, particularly in elderly patients. Overdosage may also result in pulmonary edema because of peripheral vascular constriction together with cardiac stimulation. Treatment consists of a rapidly acting α-adrenergic blocking drug and respiratory support.

Epinephrine is rapidly inactivated in the body and treatment following overdose with epinephrine is primarily supportive. If necessary, pressor effects may be counteracted by rapidly acting vasodilators or α-adrenergic blocking drugs. If prolonged hypotension follows such measures, it may be necessary to administer another pressor drug.

Overdosage sometimes results in extreme pallor and coldness of the skin, metabolic acidosis due to elevated blood lactic acid levels, and kidney failure. Suitable corrective measures must be taken in such situations.

Myocardial ischemia, myocardial infarction and cardiomyopathy have been noted in the literature following overdose of epinephrine.

The chemical structure of epinephrine is:

The molecular weight of epinephrine is 183.2.

Epinephrine solution deteriorates rapidly on exposure to air or light, turning pink from oxidation to adrenochrome and brown from the formation of melanin.

Epinephrine acts on both alpha and beta-adrenergic receptors.

Through its action on alpha-adrenergic receptors, epinephrine lessens the vasodilation and increased vascular permeability that occurs during anaphylaxis, which can lead to loss of intravascular fluid volume and hypotension.

Through its action on beta-adrenergic receptors, epinephrine causes bronchial smooth muscle relaxation and helps alleviate bronchospasm, wheezing and dyspnea that may occur during anaphylaxis.

Epinephrine also alleviates pruritus, urticaria, and angioedema and may relieve gastrointestinal and genitourinary symptoms associated with anaphylaxis because of its relaxer effects on the smooth muscle of the stomach, intestine, uterus and urinary bladder.

When administered parenterally, epinephrine has a rapid onset and short duration of action.

Long- term studies to evaluate the carcinogenic potential of epinephrine have not been conducted.

The potential for epinephrine to impair reproductive performance has not been evaluated, but epinephrine has been shown to decrease implantation in female rabbits dosed subcutaneously with 1.2 mg/kg/day (15-fold the highest human intramuscular or subcutaneous daily dose) during gestation days 3 to 9.

Vial and contents must be discarded 30 days after initial use.

Store between 20° to 25°C (68° to 77°F) [See USP Controlled Room Temperature].  Epinephrine is light sensitive. Protect from light and freezing.

Advise patients or their caregivers about common adverse reactions associated with the use of epinephrine including an increase in heart rate, the sensation of a more forceful heartbeat, palpitations, sweating, nausea and vomiting, difficulty breathing, pallor, dizziness, weakness or shakiness, headache, apprehension, nervousness, or anxiety. These symptoms and signs usually subside rapidly, especially with rest, quiet and recumbent positioning.

Warn patients with a good response to initial treatment about the possibility of recurrence of symptoms and instruct patients to obtain proper medical attention if symptoms return.

Rare cases of serious skin and soft tissue infections, including necrotizing fasciitis and myonecrosis caused by Clostridia (gas gangrene), have been reported at the injection site following epinephrine injection for anaphylaxis. Advise patients to seek medical care if they develop signs or symptoms of infection, such as persistent redness, warmth, swelling, or tenderness, at the epinephrine injection site [see Warnings and Precautions (5.2)]. 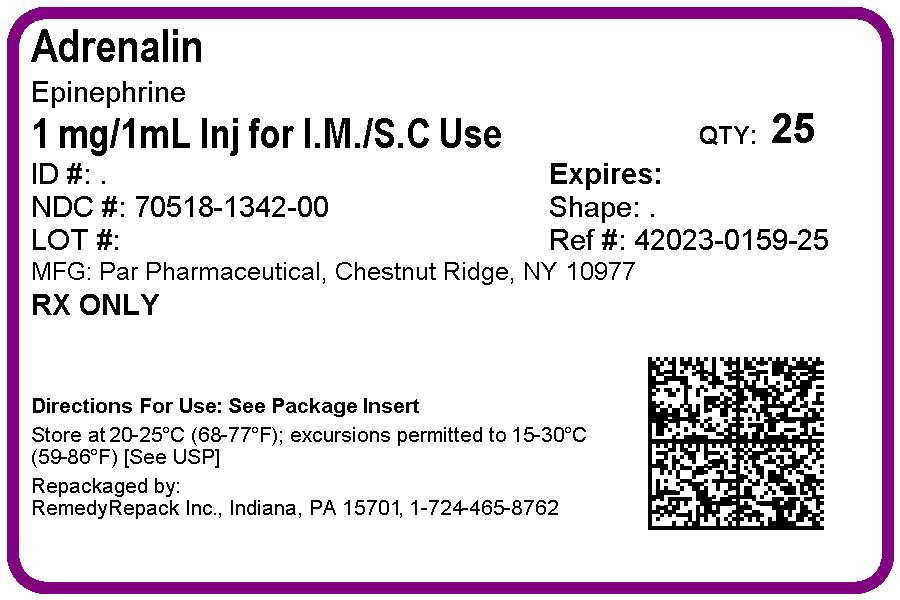