Orally administered Furadantin is readily absorbed and rapidly excreted in urine. Blood concentrations at therapeutic dosage are usually low. It is highly soluble in urine, to which it may impart a brown color.

Unlike many drugs, the presence of food or agents delaying gastric emptying can increase the bioavailability of Furadantin, presumably by allowing better dissolution in gastric juices.

Microbiology
Mode of Action
Nitrofurantoin is reduced by a wide range of enzymes including bacterial flavoproteins to reactive intermediates which are damaging to macromolecules such as DNA and proteins.

Interaction with Other Antimicrobials
Antagonism has been demonstrated in vitro between nitrofurantoin and quinolone antimicrobial agents. Nitrofurantoin, in the form of nitrofurantoin oral suspension, has been shown to be active against most of the following bacteria both in vitro and in clinical infections: (See INDICATIONS AND USAGE).

Gram-Negative Aerobes
Escherichia coli
NOTE: Some strains of Enterobacter species and Klebsiella species are resistant to nitrofurantoin.
The following in vitro data are available, but their clinical significance is unknown. Nitrofurantoin exhibits in vitro activity against the following bacteria; however, the safety and effectiveness of nitrofurantoin in treating clinical infections due to these bacteria have not been established in adequate and well controlled clinical trials.

Gram-Negative Aerobes
Citrobacter koseri
Citrobacter freundii
Klebsiella oxytoca
Nitrofurantoin is not active against most strains of Proteus species or Serratia species. It has no activity against Pseudomonas species.

Nitrofurantoin is not indicated for the treatment of pyelonephritis or perinephric abscesses.

Nitrofurantoins lack the broader tissue distribution of other therapeutic agents approved for urinary tract infections. Consequently, many patients who are treated with Furadantin are predisposed to persistence or reappearance of bacteriuria. Urine specimens for culture and susceptibility testing should be obtained before and after completion of therapy. If persistence or reappearance of bacteriuria occurs after treatment with Furadantin, other therapeutic agents with broader tissue distribution should be selected. In considering the use of Furadantin, lower eradication rates should be balanced against the increased potential for systemic toxicity and for the development of antimicrobial resistance when agents with broader tissue distribution are utilized.

Anuria, oliguria, or significant impairment of renal function (creatinine clearance under 60 mL per minute or clinically significant elevated serum creatinine) are contraindications. Treatment of this type of patient carries an increased risk of toxicity because of impaired excretion of the drug.

Because of the possibility of hemolytic anemia due to immature erythrocyte enzyme systems (glutathione instability), the drug is contraindicated in pregnant patients at term (38-42 weeks gestation), during labor and delivery, or when the onset of labor is imminent. For the same reason, the drug is contraindicated in neonates under one month of age.

ACUTE, SUBACUTE, OR CHRONIC PULMONARY REACTIONS HAVE BEEN OBSERVED IN PATIENTS TREATED WITH NITROFURANTOIN. IF THESE REACTIONS OCCUR, FURADANTIN SHOULD BE DISCONTINUED AND APPROPRIATE MEASURES TAKEN. REPORTS HAVE CITED PULMONARY REACTIONS AS A CONTRIBUTING CAUSE OF DEATH.

CHRONIC PULMONARY REACTIONS (DIFFUSE INTERSTITIAL PNEUMONITIS OR PULMONARY FIBROSIS, OR BOTH) CAN DEVELOP INSIDIOUSLY. THESE REACTIONS OCCUR RARELY AND GENERALLY IN PATIENTS RECEIVING THERAPY FOR SIX MONTHS OR LONGER. CLOSE MONITORING OF THE PULMONARY CONDITION OF PATIENTS RECEIVING LONG-TERM THERAPY IS WARRANTED AND REQUIRES THAT THE BENEFITS OF THERAPY BE WEIGHED AGAINST POTENTIAL RISKS. (see RESPIRATORY REACTIONS.)

Peripheral neuropathy, which may become severe or irreversible, has occurred. Fatalities have been reported. Conditions such as renal impairment (creatinine clearance under 60 mL per minute or clinically significant elevated serum creatinine), anemia, diabetes mellitus, electrolyte imbalance, vitamin B deficiency, and debilitating disease may enhance the occurrence of peripheral neuropathy. Patients receiving long-term therapy should be monitored periodically for changes in renal function.

Optic neuritis has been reported rarely in postmarketing experience with nitrofurantoin formulations.

Cases of hemolytic anemia of the primaquine-sensitivity type have been induced by nitrofurantoin. Hemolysis appears to be linked to a glucose-6-phosphate dehydrogenase deficiency in the red blood cells of the affected patients. This deficiency is found in 10 percent of Blacks and a small percentage of ethnic groups of Mediterranean and Near-Eastern origin. Hemolysis is an indication for discontinuing Furadantin; hemolysis ceases when the drug is withdrawn.

Clostridium difficile associated diarrhea (CDAD) has been reported with use of nearly all antibacterial agents, including Furadantin Oral Suspension, and may range in severity from mild diarrhea to fatal colitis. Treatment with antibacterial agents alters the normal flora of the colon leading to overgrowth of C. difficile.

Patients should be advised not to use antacid preparations containing magnesium trisilicate while taking Furadantin.

Uricosuric drugs, such as probenecid and sulfinpyrazone, can inhibit renal tubular secretion of nitrofurantoin. The resulting increase in nitrofurantoin serum levels may increase toxicity, and the decreased urinary levels could lessen its efficacy as a urinary tract antibacterial.

As a result of the presence of nitrofurantoin, a false-positive reaction for glucose in the urine may occur. This has been observed with Benedict's and Fehling's solutions but not with the glucose enzymatic test.

Nitrofurantoin presented evidence of carcinogenic activity in female B6C3F1 mice as shown by increased incidences of tubular adenomas, benign mixed tumors, and granulosa cell tumors of the ovary. In male F344/N rats, there were increased incidences of uncommon kidney tubular cell neoplasms, osteosarcomas of the bone, and neoplasms of the subcutaneous tissue. In one study involving subcutaneous administration of 75 mg/kg nitrofurantoin to pregnant female mice, lung papillary adenomas of unknown significance were observed in the F1 generation.

Nitrofurantoin has been shown to induce point mutations in certain strains of Salmonella typhimurium and forward mutations on L5178Y mouse lymphoma cells. Nitrofurantoin induced increased numbers of sister chromatid exchanges and chromosomal aberrations in Chinese hamster ovary cells but not in human cells in culture. Results of the sex-linked recessive lethal assay in Drosophila were negative after administration of nitrofurantoin by feeding or by injection. Nitrofurantoin did not induce heritable mutation in the rodent models examined.

The significance of carcinogenicity and mutagenicity findings relative to the therapeutic use of nitrofurantoin in humans is unknown.

The administration of high doses of nitrofurantoin to rats causes temporary spermatogenic arrest; this is reversible on discontinuing the drug. Doses of 10 mg/kg/day or greater in healthy human males may, in certain unpredictable instances, produce a slight to moderate spermatogenic arrest with a decrease in sperm count.

Several reproduction studies have been performed in rabbits and rats at doses up to six times the human dose and have revealed no evidence of impaired fertility or harm to the fetus due to nitrofurantoin. In a single published study conducted in mice at 68 times the human dose (based on mg/kg administered to the dam), growth retardation and a low incidence of minor and common malformations were observed. However at 25 times the human dose, fetal malformations were not observed; the relevance of these findings to humans is uncertain. There are, however, no adequate and well-controlled studies in pregnant women. Because animal reproduction studies are not always predictive of human response, this drug should be used during pregnancy only if clearly needed.

Nitrofurantoin has been shown in one published transplacental carcinogenicity study to induce lung papillary adenomas in the F1 generation mice at doses 19 times the human dose on a mg/kg basis. The relationship of this finding to potential human carcinogenesis is presently unknown. Because of the uncertainty regarding the human implications of these animal data, this drug should be used during pregnancy only if clearly needed.

Nitrofurantoin has been detected in human breast milk in trace amounts. Because of the potential for serious adverse reactions from nitrofurantoin in nursing infants under one month of age, a decision should be made whether to discontinue nursing or to discontinue the drug, taking into account the importance of the drug to the mother. (see CONTRAINDICATIONS)

Safety and effectiveness of Furadantin in neonates below the age of one month have not been established. (see CONTRAINDICATIONS)

CHRONIC PULMONARY REACTIONS MAY OCCUR GENERALLY IN PATIENTS WHO HAVE RECEIVED CONTINUOUS TREATMENT FOR SIX MONTHS OR LONGER. MALAISE, DYSPNEA ON EXERTION, COUGH, AND ALTERED PULMONARY FUNCTION ARE COMMON MANIFESTATIONS WHICH CAN OCCUR INSIDIOUSLY. RADIOLOGIC AND HISTOLOGIC FINDINGS OF DIFFUSE INTERSTITIAL PNEUMONITIS OR FIBROSIS, OR BOTH, ARE ALSO COMMON MANIFESTATIONS OF THE CHRONIC PULMONARY REACTION. FEVER IS RARELY PROMINENT.

In subacute pulmonary reactions, fever and eosinophilia occur less often than in the acute form. Upon cessation of therapy, recovery may require several months. If the symptoms are not recognized as being drug-related and nitrofurantoin therapy is not stopped, the symptoms may become more severe.

Cyanosis has been reported rarely.

Peripheral neuropathy, which may become severe or irreversible, has occurred. Fatalities have been reported. Conditions such as renal impairment (creatinine clearance under 60 mL per minute or clinically significant elevated serum creatinine), anemia, diabetes mellitus, electrolyte imbalance, vitamin B deficiency, and debilitating diseases may increase the possibility of peripheral neuropathy (see WARNINGS)

Asthenia, vertigo, nystagmus, dizziness, headache, and drowsiness have also been reported with the use of nitrofurantoin.

Exfoliative dermatitis and erythema multiforme (including Stevens-Johnson syndrome) have been reported rarely. Transient alopecia also has been reported.

Nausea, emesis, and anorexia occur most often. Abdominal pain and diarrhea are less common gastrointestinal reactions. These dose-related reactions can be minimized by reduction of dosage. Sialadenitis and pancreatitis have been reported. There have been sporadic reports of pseudomembranous colitis with the use of nitrofurantoin. The onset of pseudomembranous colitis symptoms may occur during or after antimicrobial treatment. (see WARNINGS)

Cyanosis secondary to methemoglobinemia has been reported rarely.

As with other antimicrobial agents, superinfections caused by resistant organisms, e.g., Pseudomonas species or Candida species, can occur. There are sporadic reports of Clostridium difficile superinfections, or pseudomembranous colitis, with the use of nitrofurantoin.

Occasional incidents of acute overdosage of Furadantin have not resulted in any specific symptoms other than vomiting. Induction of emesis is recommended. There is no specific antidote, but a high fluid intake should be maintained to promote urinary excretion of the drug. It is dialyzable.

Furadantin should be given with food to improve drug absorption and, in some patients, tolerance.

Pediatric Patients
5-7 mg/kg of body weight per 24 hours, given in four divided doses (contraindicated under one month of age).

The following table is based on an average weight in each range receiving 5 to 6 mg/kg of body weight per 24 hours, given in four divided doses. It can be used to calculate an average dose of Furadantin Oral Suspension (25 mg/5 mL) for pediatric patients.


Therapy should be continued for one week or for at least 3 days after sterility of the urine is obtained. Continued infection indicates the need for reevaluation.

Furadantin Oral Suspension is available in: 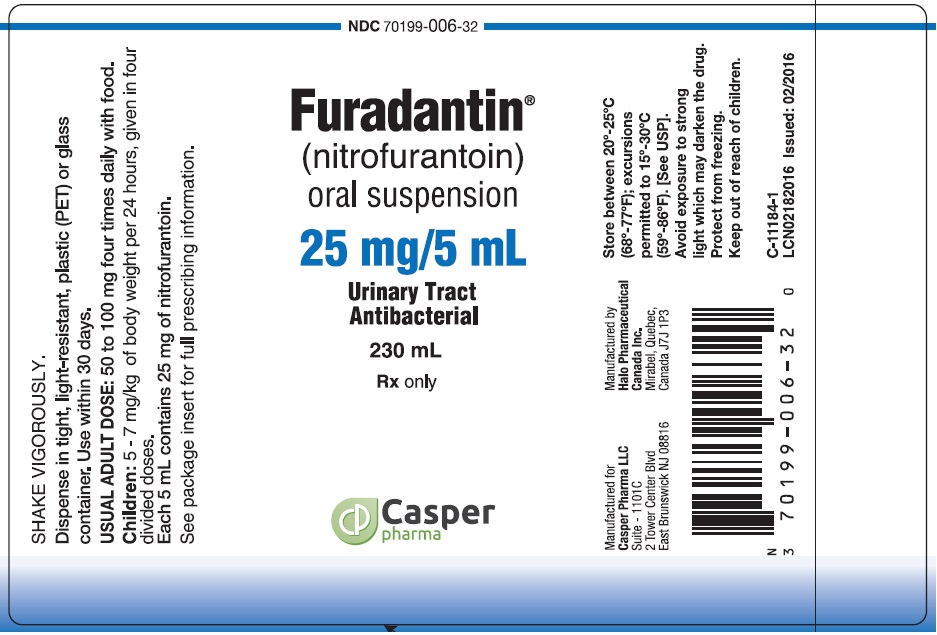 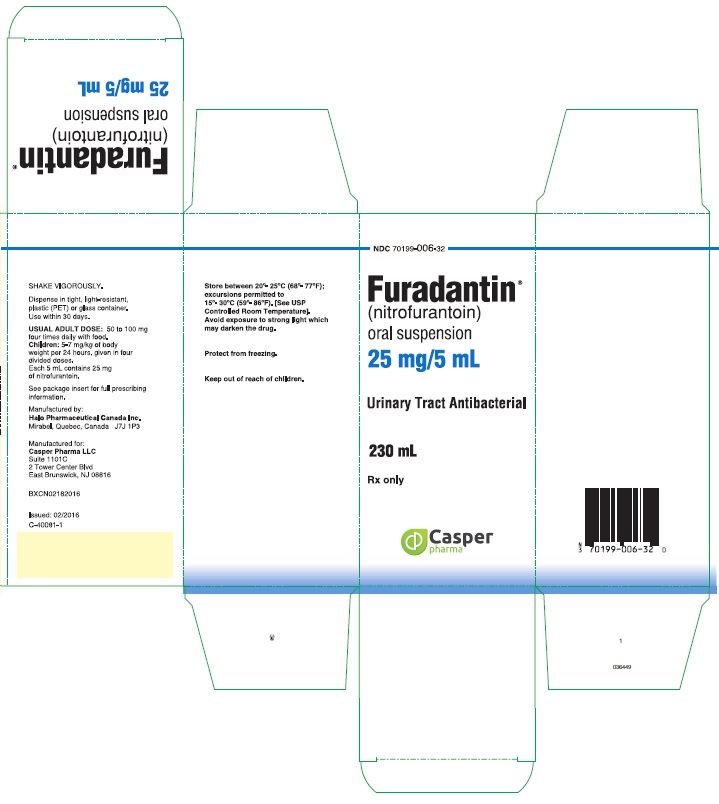