To reduce the development of drug-resistant bacteria and maintain the effectiveness of SPECTRACEF® and other antibacterial drugs, SPECTRACEF® should be used only to treat infections that are proven or strongly suspected to be caused by bacteria.

SPECTRACEF® tablets contain cefditoren pivoxil, a semi-synthetic cephalosporin antibiotic for oral administration. It is a prodrug which is hydrolyzed by esterases during absorption, and the drug is distributed in the circulating blood as active cefditoren.

The amorphous form of cefditoren pivoxil developed for clinical use is a light yellow powder. It is freely soluble in dilute hydrochloric acid and soluble at levels equal to 6.06 mg/mL in ethanol and <0.1 mg/mL in water.

Less than dose-proportional increases in Cmax and area under the concentration-time curve (AUC) were observed at doses of 400 mg and above. Cefditoren does not accumulate in plasma following twice daily administration to subjects with normal renal function. Under fasting conditions, the estimated absolute bioavailability of cefditoren pivoxil is approximately 14%. The absolute bioavailability of cefditoren pivoxil administered with a low fat meal (693 cal, 14 g fat, 122 g carb, 23 g protein) is 16.1 ± 3.0%.

Data on the penetration of cefditoren into human cerebrospinal fluid are not available.

Cefditoren is eliminated from the plasma, with a mean terminal elimination half-life (t1/2) of 1.6 ± 0.4 hours in young healthy adults. Cefditoren is not appreciably metabolized. After absorption, cefditoren is mainly eliminated by excretion into the urine, with a renal clearance of approximately 4-5 L/h. Studies with the renal tubular transport blocking agent probenecid indicate that tubular secretion, along with glomerular filtration is involved in the renal elimination of cefditoren. Cefditoren renal clearance is reduced in patients with renal insufficiency. (See Special Populations, Renal Insufficiency and Hemodialysis.)

The effect of gender on the pharmacokinetics of cefditoren was evaluated in 24 male and 24 female subjects given 400 mg cefditoren pivoxil BID for 7 days. The extent of exposure in plasma was greater in females than in males, as evidenced by a 14% higher Cmax and a 16% higher AUC for females compared to males. Renal clearance of cefditoren in females was 13% lower than in males. These differences could be attributed to gender-related differences in lean body mass. No dose adjustments are necessary for gender.

Cefditoren pharmacokinetics investigated in six adult subjects with end-stage renal disease (ESRD) undergoing hemodialysis given a single 400 mg dose of cefditoren pivoxil were highly variable. The mean t1/2 was 4.7 hours and ranged from 1.5 to 15 hours. Hemodialysis (4 hours duration) removed approximately 30% of cefditoren from systemic circulation but did not change the apparent terminal elimination half-life. The appropriate dose for ESRD patients has not been determined. (See DOSAGE AND ADMINISTRATION.)

Cefditoren is a cephalosporin with antibacterial activity against gram-positive and gram-negative pathogens. The bactericidal activity of cefditoren results from the inhibition of cell wall synthesis via affinity for penicillin-binding proteins (PBPs).

Cefditoren is stable in the presence of a variety of ß-lactamases, including penicillinases and some cephalosporinases. Cefditoren has been shown to be active against most strains of the following bacteria, both in vitro and in clinical infections, as described in the INDICATIONS AND USAGE section.

The following in vitro data are available, but their clinical significance is unknown. Cefditoren exhibits in vitro minimum inhibitory concentrations (MICs) of ≤0.125 µg/mL against most (≥90%) strains of the following bacteria; however, the safety and effectiveness of cefditoren in treating clinical infections due to these bacteria have not been established in adequate and well-controlled clinical trials.

For testing Haemophilus spp.a and Streptococcus spp. including S. pneumoniaeb:

Standardized susceptibility test procedures require the use of laboratory control bacterial strains to control the technical aspects of the laboratory procedures. Standard cefditoren powder should provide the following MICs with these quality control strains:

bThis quality control range is applicable to only H. influenzae ATCC 49247 and ATCC 49766 tested by a microdilution procedure using HTM.1

SPECTRACEF® (cefditoren pivoxil) is indicated for the treatment of mild to moderate infections in adults and adolescents (12 years of age or older) which are caused by susceptible strains of the designated microorganisms in the conditions listed below.

To reduce the development of drug-resistant bacteria and maintain the effectiveness of SPECTRACEF® and other antibacterial drugs, SPECTRACEF® should be used only to treat infections that are proven or strongly suspected to be caused by susceptible bacteria. When culture and susceptibility information are available, they should be considered in selecting or modifying antibacterial therapy. In the absence of such data, local epidemiology and susceptibility patterns may contribute to the empiric selection of therapy.

SPECTRACEF® is contraindicated in patients with known allergy to the cephalosporin class of antibiotics or any of its components.

BEFORE THERAPY WITH SPECTRACEF® (CEFDITOREN PIVOXIL) IS INSTITUTED, CAREFUL INQUIRY SHOULD BE MADE TO DETERMINE WHETHER THE PATIENT HAS HAD PREVIOUS HYPERSENSITIVITY REACTIONS TO CEFDITOREN PIVOXIL, OTHER CEPHALOSPORINS, PENICILLINS, OR OTHER DRUGS. IF CEFDITOREN PIVOXIL IS TO BE GIVEN TO PENICILLIN-SENSITIVE PATIENTS, CAUTION SHOULD BE EXERCISED BECAUSE CROSS-HYPERSENSITIVITY AMONG ß-LACTAM ANTIBIOTICS HAS BEEN CLEARLY DOCUMENTED AND MAY OCCUR IN UP TO 10% OF PATIENTS WITH A HISTORY OF PENICILLIN ALLERGY. IF AN ALLERGIC REACTION, INCLUDING ANAPHYLAXIS, TO CEFDITOREN PIVOXIL OCCURS, THE DRUG SHOULD BE DISCONTINUED. SERIOUS ACUTE HYPERSENSITIVITY REACTIONS MAY REQUIRE TREATMENT WITH EPINEPHRINE AND OTHER EMERGENCY MEASURES, INCLUDING OXYGEN, INTRAVENOUS FLUIDS, INTRAVENOUS ANTIHISTAMINES, CORTICOSTEROIDS, PRESSOR AMINES, AND AIRWAY MANAGEMENT, AS CLINICALLY INDICATED.

Pseudomembranous colitis has been reported with nearly all antibacterial agents, including cefditoren pivoxil, and may range in severity from mild to life-threatening. Therefore, it is important to consider this diagnosis in patients who present with diarrhea subsequent to the administration of antibacterial agents.

Treatment with antibacterial agents alters normal flora of the colon and may permit overgrowth of clostridia. Studies indicate that a toxin produced by Clostridium difficile (C. difficile) is a primary cause of antibiotic-associated colitis.

After the diagnosis of pseudomembranous colitis has been established, appropriate therapeutic measures should be initiated. Mild cases of pseudomembranous colitis usually respond to drug discontinuation alone. In moderate to severe cases, consideration should be given to management with fluids and electrolytes, protein supplementation, and treatment with an antibacterial drug clinically effective against C. difficile colitis.

Prescribing SPECTRACEF® in the absence of a proven or strongly suspected bacterial infection or a prophylactic indication is unlikely to provide benefit to the patient and increases the risk of the development of drug-resistant bacteria.

SPECTRACEF® is not recommended when prolonged antibiotic treatment is necessary, since other pivalate-containing compounds have caused clinical manifestations of carnitine deficiency when used over a period of months. No clinical effects of carnitine decrease have been associated with short-term treatment. The effects on carnitine concentrations of repeat short-term courses of SPECTRACEF® are not known.

However, some sub-populations (e.g., patients with renal impairment, patients with decreased muscle mass) may be at increased risk for reductions in serum carnitine concentrations during cefditoren pivoxil therapy. Furthermore, the appropriate dose in patients with end-stage renal disease has not been determined. (See DOSAGE AND ADMINISTRATION, Patients with Renal Insufficiency).

As with other antibiotics, prolonged treatment may result in the possible emergence and overgrowth of resistant organisms. Careful observation of the patient is essential. If superinfection occurs during therapy, appropriate alternative therapy should be administered.

Cephalosporins may be associated with a fall in prothrombin activity. Those at risk include patients with renal or hepatic impairment, or poor nutritional state, as well as patients receiving a protracted course of antimicrobial therapy, and patients previously stabilized on anticoagulant therapy. Prothrombin time should be monitored in patients at risk and exogenous vitamin K administered as indicated. In clinical trials, there was no difference between cefditoren and comparator cephalosporins in the incidence of increased prothrombin time.

Patients should be counseled that antibacterial drugs including SPECTRACEF® should only be used to treat bacterial infections. They do not treat viral infections (e.g., the common cold). When SPECTRACEF® is prescribed to treat a bacterial infection, patients should be told that although it is common to feel better early in the course of therapy, the medication should be taken exactly as directed. Skipping doses or not completing the full course of therapy may (1) decrease the effectiveness of the immediate treatment and (2) increase the likelihood that bacteria will develop resistance and will not be treatable by SPECTRACEF® or other antibacterial drugs in the future.

SPECTRACEF® (cefditoren pivoxil) should be taken with meals to enhance absorption.

SPECTRACEF® may be taken concomitantly with oral contraceptives.

It is not recommended that SPECTRACEF® be taken concomitantly with antacids or other drugs taken to reduce stomach acids. (See PRECAUTIONS, Drug Interactions.)

Multiple doses of cefditoren pivoxil had no effect on the pharmacokinetics of ethinyl estradiol, the estrogenic component in most oral contraceptives.

Co-administration of a single dose of an antacid which contained both magnesium (800 mg) and aluminum (900 mg) hydroxides reduced the oral absorption of a single 400 mg dose of cefditoren pivoxil administered following a meal, as evidenced by a 14% decrease in mean Cmax and an 11% decrease in mean AUC. Although the clinical significance is not known, it is not recommended that cefditoren pivoxil be taken concomitantly with antacids.

Co-administration of a single dose of intravenously administered famotidine (20 mg) reduced the oral absorption of a single 400 mg dose of cefditoren pivoxil administered following a meal, as evidenced by a 27% decrease in mean Cmax and a 22% decrease in mean AUC. Although the clinical significance is not known, it is not recommended that cefditoren pivoxil be taken concomitantly with H2 receptor antagonists.

Cephalosporins are known to occasionally induce a positive direct Coombs’ test. A false-positive reaction for glucose in the urine may occur with copper reduction tests (Benedict’s or Fehling’s solution or with CLINITEST® tablets), but not with enzyme-based tests for glycosuria (e.g., CLINISTIX®, TES-TAPE®). As a false-negative result may occur in the ferricyanide test, it is recommended that either the glucose oxidase or hexokinase method be used to determine blood/plasma glucose levels in patients receiving cefditoren pivoxil.

In a postnatal development study in rats, cefditoren pivoxil produced no adverse effects on postnatal survival, physical and behavioral development, learning abilities, and reproductive capability at sexual maturity when tested at doses of up to 750 mg/kg/day, the highest dose tested. This is approximately 18 times a human dose of 200 mg BID based on mg/m2/day.

There are, however, no adequate and well-controlled studies in pregnant women. Because animal reproductive studies are not always predictive of human response, this drug should be used during pregnancy only if clearly needed.

Cefditoren pivoxil has not been studied for use during labor and delivery.

Cefditoren was detected in the breast milk of lactating rats. Because many drugs are excreted in human breast milk, caution should be exercised when cefditoren pivoxil is administered to nursing women.

In clinical trials, 4834 adult and adolescent patients have been treated with the recommended doses of cefditoren pivoxil tablets (200 mg or 400 mg BID). Most adverse events were mild and self-limiting. No deaths or permanent disabilities have been attributed to cefditoren.

The following adverse events were thought by the investigators to be possibly, probably, or definitely related to cefditoren tablets in multiple-dose clinical trials:

The overall incidence of adverse events, and in particular diarrhea, increased with the higher recommended dose of SPECTRACEF®.

Several cephalosporins have been implicated in triggering seizures, particularly in patients with renal impairment when the dosage was not reduced. (See DOSAGE AND ADMINISTRATION.) If seizures associated with drug therapy occur, the drug should be discontinued. Anticonvulsant therapy can be given if clinically indicated.

Information on cefditoren pivoxil overdosage in humans is not available. However, with other ß-lactam antibiotics, adverse effects following overdosage have included nausea, vomiting, epigastric distress, diarrhea, and convulsions. Hemodialysis may aid in the removal of cefditoren from the body, particularly if renal function is compromised (30% reduction of plasma concentrations following 4 hours of hemodialysis). Treat overdosage symptomatically and institute supportive measures as required.

In acute animal toxicity studies, cefditoren pivoxil when tested at the limit oral doses of 5100 mg/kg in rats and up to 2000 mg/kg in dogs did not exhibit any health effects of concern. Certain effects, such as diarrhea and soft stool lasting for a few days were observed in some animals as expected with most oral antibiotics due to inhibition of intestinal microflora.

*Should be taken with meals 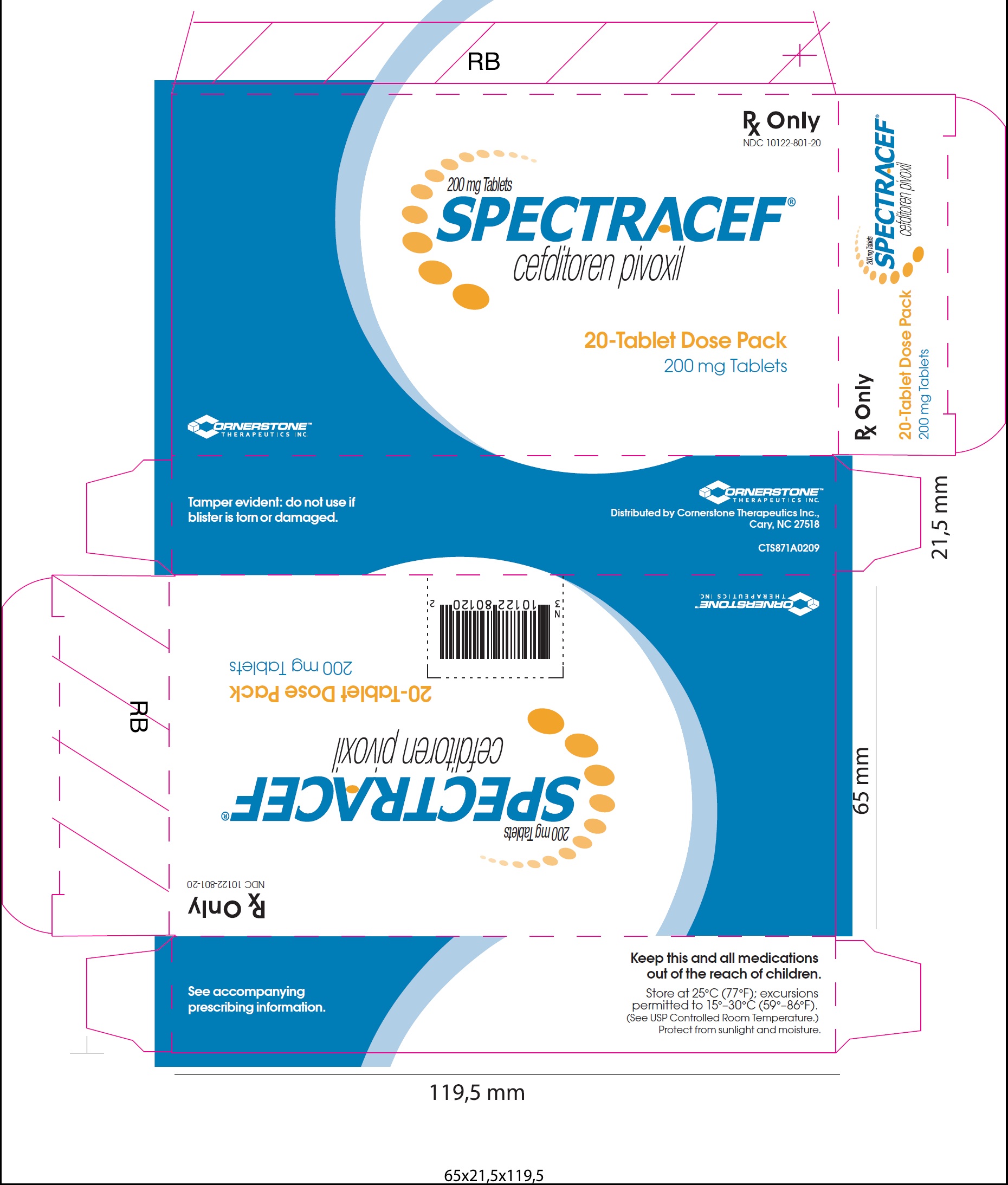 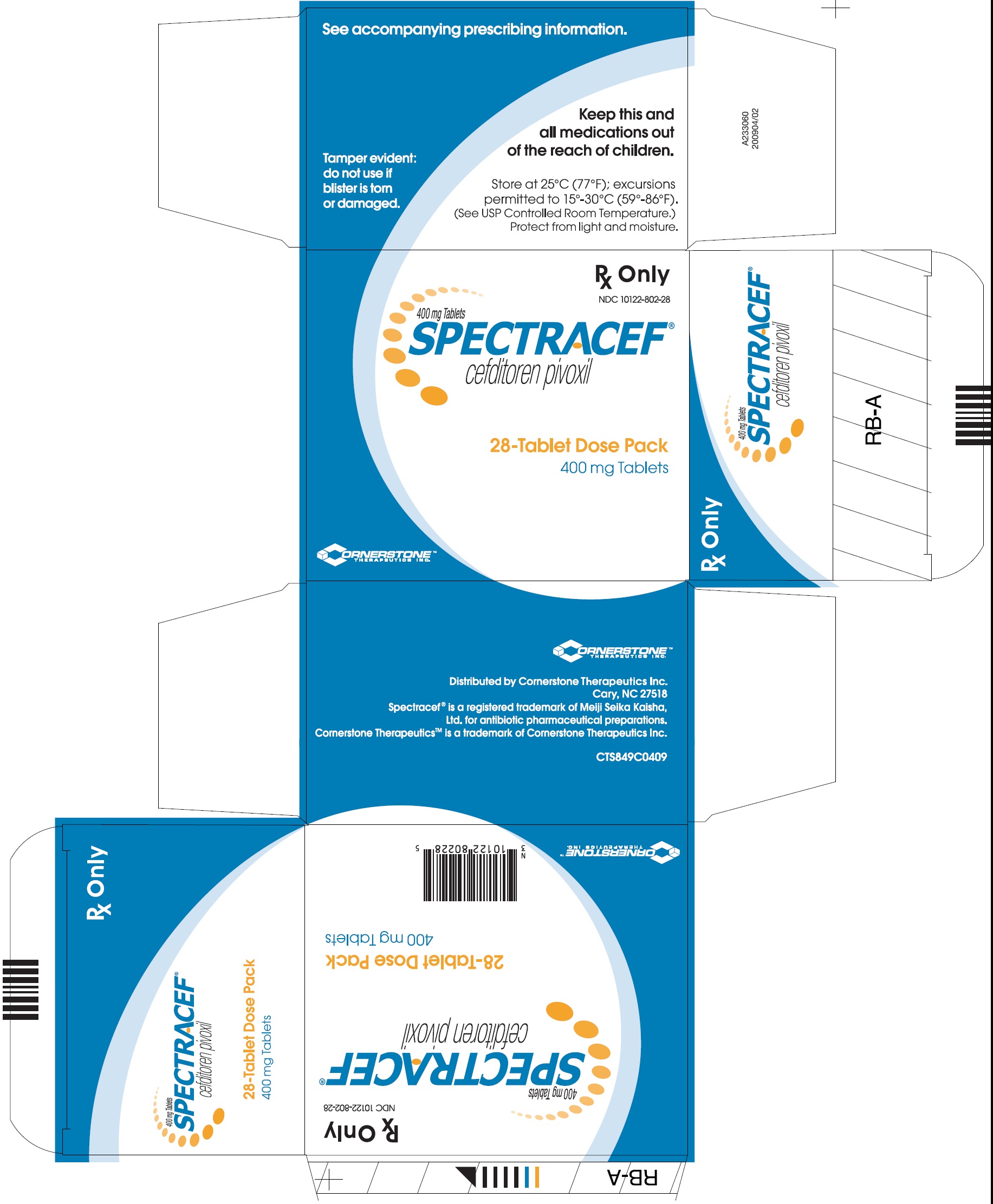