It is recommended that dacarbazine be administered under the supervision of a qualified physician experienced in the use of cancer chemotherapeutic agents.

1.
Hemopoietic depression is the most common toxicity with dacarbazine (see WARNINGS).
2.
Hepatic necrosis has been reported (see WARNINGS).
3.
Studies have demonstrated this agent to have a carcinogenic and teratogenic effect when used in animals.
4.
In treatment of each patient, the physician must weigh carefully the possibility of achieving therapeutic benefit against the risk of toxicity.

Dacarbazine for Injection USP is a colorless to an ivory colored solid which is light sensitive. Each vial contains 200 mg of dacarbazine (the active ingredient), anhydrous citric acid and mannitol. Dacarbazine is reconstituted and administered intravenously (pH 3.0 to 4.0). Dacarbazine is an anticancer agent. Chemically, dacarbazine is 5-(3,3-Dimethyl-1-triazeno)imidazole-4-carboxamide with the following structural formula: 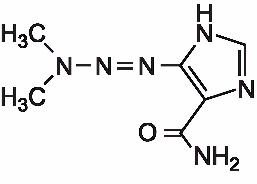 After intravenous administration of dacarbazine, the volume of distribution exceeds total body water content suggesting localization in some body tissue, probably the liver. Its disappearance from the plasma is biphasic with initial half-life of 19 minutes and a terminal half-life of 5 hours. In a patient with renal and hepatic dysfunctions, the half-lives were lengthened to 55 minutes and 7.2 hours. The average cumulative excretion of unchanged dacarbazine in the urine is 40% of the injected dose in 6 hours. Dacarbazine is subject to renal tubular secretion rather than glomerular filtration. At therapeutic concentrations dacarbazine is not appreciably bound to human plasma protein.

In man, dacarbazine is extensively degraded. Besides unchanged dacarbazine, 5-aminoimidazole-4-carboxamide (AIC) is a major metabolite of dacarbazine excreted in the urine. AIC is not derived endogenously but from the injected dacarbazine, because the administration of radioactive dacarbazine labeled with 14C in the imidazole portion of the molecule (dacarbazine-2-14C) gives rise to AIC-2-14C.

Although the exact mechanism of action of dacarbazine is not known, three hypotheses have been offered:

1.
inhibition of DNA synthesis by acting as a purine analog
2.
action as an alkylating agent
3.
interaction with SH groups

Dacarbazine is indicated in the treatment of metastatic malignant melanoma. In addition, dacarbazine is also indicated for Hodgkin's disease as a second-line therapy when used in combination with other effective agents.

Dacarbazine is contraindicated in patients who have demonstrated a hypersensitivity to it in the past.

Hemopoietic depression is the most common toxicity with dacarbazine and involves primarily the leukocytes and platelets, although, anemia may sometimes occur. Leukopenia and thrombocytopenia may be severe enough to cause death. The possible bone marrow depression requires careful monitoring of white blood cells, red blood cells, and platelet levels. Hemopoietic toxicity may warrant temporary suspension or cessation of therapy with dacarbazine.

Hepatic toxicity accompanied by hepatic vein thrombosis and hepatocellular necrosis resulting in death, has been reported. The incidence of such reactions has been low; approximately 0.01% of patients treated. This toxicity has been observed mostly when dacarbazine has been administered concomitantly with other anti-neoplastic drugs; however, it has also been reported in some patients treated with dacarbazine alone.

Anaphylaxis can occur following the administration of dacarbazine.

Hospitalization is not always necessary but adequate laboratory study capability must be available. Extravasation of the drug subcutaneously during intravenous administration may result in tissue damage and severe pain. Local pain, burning sensation, and irritation at the site of injection may be relieved by locally applied hot packs.

Carcinogenicity of dacarbazine was studied in rats and mice. Proliferative endocardial lesions, including fibrosarcomas and sarcomas were induced by dacarbazine in rats. In mice, administration of dacarbazine resulted in the induction of angiosarcomas of the spleen.

Symptoms of anorexia, nausea, and vomiting are the most frequently noted of all toxic reactions. Over 90% of patients are affected with the initial few doses. The vomiting lasts 1 to 12 hours and is incompletely and unpredictably palliated with phenobarbital and/or prochlorperazine. Rarely, intractable nausea and vomiting have necessitated discontinuance of therapy with dacarbazine. Rarely, dacarbazine has caused diarrhea. Some helpful suggestions include restricting the patient’s oral intake of food for 4 to 6 hours prior to treatment. The rapid toleration of these symptoms suggests that a central nervous system mechanism may be involved, and usually these symptoms subside after the first 1 or 2 days.

There are a number of minor toxicities that are infrequently noted. Patients have experienced an influenza-like syndrome of fever to 39°C, myalgias and malaise. These symptoms occur usually after large single doses, may last for several days, and they may occur with successive treatments.

Alopecia has been noted as has facial flushing and facial paresthesia. There have been few reports of significant liver or renal function test abnormalities in man. However, these abnormalities have been observed more frequently in animal studies.

Erythematous and urticarial rashes have been observed infrequently after administration of dacarbazine. Rarely, photosensitivity reactions may occur.

The recommended dosage is 2 to 4.5 mg/kg/day for 10 days. Treatment may be repeated at 4 week intervals.

An alternate recommended dosage is 250 mg/square meter body surface/day I.V. for 5 days. Treatment may be repeated every 3 weeks.

The recommended dosage of dacarbazine in the treatment of Hodgkin's disease is 150 mg/square meter body surface/day for 5 days, in combination with other effective drugs. Treatment may be repeated every 4 weeks. An alternative recommended dosage is 375 mg/square meter body surface on day 1, in combination with other effective drugs, to be repeated every 15 days.

The reconstituted solution may be further diluted with 5% dextrose injection, or sodium chloride injection, and administered as an intravenous infusion.

Procedures for proper handling and disposal of anticancer drugs should be considered. Several guidelines on this subject have been published.1-7 There is no general agreement that all of the procedures recommended in the guidelines are necessary or appropriate.

Parenteral drug products should be inspected visually for particulate matter or discoloration prior to administration whenever solution and container permit.

Dacarbazine for Injection USP is supplied as follows: