Lomustine should be administered under the supervision of a qualified physician experienced in the use of cancer chemotherapeutic agents.

Bone marrow suppression, notably thrombocytopenia and leukopenia, which may contribute to bleeding and overwhelming infections in an already compromised patient, is the most common and severe of the toxic effects of Lomustine (see WARNINGS and ADVERSE REACTIONS).

Since the major toxicity is delayed bone marrow suppression, blood counts should be monitored weekly for at least 6 weeks after a dose (see ADVERSE REACTIONS). At the recommended dosage, courses of Lomustine should not be given more frequently than every 6 weeks.

Lomustine (CCNU) is one of the nitrosoureas used in the treatment of certain neoplastic diseases. It is 1-(2-chloro-ethyl)-3-cyclohexyl-1-nitrosourea. It is a yellow powder with the empirical formula of C 9H 16ClN 3O 2 and a molecular weight of 233.71. Lomustine is soluble in 10% ethanol (0.05 mg per mL) and in absolute alcohol (70 mg per mL). Lomustine is relatively insoluble in water (<0.05 mg per mL).

It is relatively un-ionized at a physiological pH.

Inactive ingredients in Lomustine Capsules are magnesium stearate and mannitol.

Lomustine is available in 10 mg, 40 mg, and 100 mg capsules for oral administration.

Although it is generally agreed that lomustine alkylates DNA and RNA, it is not cross resistant with other alkylators. As with other nitrosoureas, it may also inhibit several key enzymatic processes by carbamoylation of amino acids in proteins.

Lomustine may be given orally. Following oral administration of radioactive lomustine at doses ranging from 30 mg/m 2 to 100 mg/m 2, about half of the radioactivity given was excreted in the urine in the form of degradation products within 24 hours.

The serum half-life of the metabolites ranges from 16 hours to 2 days. Tissue levels are comparable to plasma levels at 15 minutes after intravenous administration.

Because of the high lipid solubility and the relative lack of ionization at physiological pH, lomustine crosses the blood-brain barrier quite effectively. Levels of radioactivity in the CSF are 50% or greater than those measured concurrently in plasma.

Lomustine has been shown to be useful as a single agent in addition to other treatment modalities, or in established combination therapy with other approved chemotherapeutic agents in the following:

Brain tumors—both primary and metastatic, in patients who have already received appropriate surgical and/or radiotherapeutic procedures.

Hodgkin's disease—secondary therapy in combination with other approved drugs in patients who relapse while being treated with primary therapy, or who fail to respond to primary therapy.

Lomustine should not be given to individuals who have demonstrated a previous hypersensitivity to it.

Since the major toxicity is delayed bone marrow suppression, blood counts should be monitored weekly for at least 6 weeks after a dose (see ADVERSE REACTIONS). At the recommended dosage, courses of Lomustine should not be given more frequently than every 6 weeks.

Long-term use of nitrosoureas has been reported to be possibly associated with the development of secondary malignancies.

Lomustine can cause fetal harm when administered to a pregnant woman. Lomustine is embryotoxic and teratogenic in rats and embryotoxic in rabbits at dose levels equivalent to the human dose. There are no adequate and well controlled studies in pregnant women. If this drug is used during pregnancy, or if the patient becomes pregnant while taking (receiving) this drug, the patient should be apprised of the potential hazard to the fetus. Women of childbearing potential should be advised to avoid becoming pregnant.

In all instances where the use of Lomustine is considered for chemotherapy, the physician must evaluate the need and usefulness of the drug against the risks of toxic effects or adverse reactions. Most such adverse reactions are reversible if detected early. When such effects or reactions do occur, the drug should be reduced in dosage or discontinued and appropriate corrective measures should be taken according to the clinical judgment of the physician. Reinstitution of Lomustine therapy should be carried out with caution and with adequate consideration of the further need for the drug and alertness as to possible recurrence of toxicity.

Provide patients with the following information and instructions:

Due to delayed bone marrow suppression, blood counts should be monitored weekly for at least 6 weeks after a dose.

Baseline pulmonary function studies should be conducted along with frequent pulmonary function tests during treatment. Patients with a baseline below 70% of the predicted Forced Vital Capacity (FVC) or Carbon Monoxide Diffusing Capacity (DL CO) are particularly at risk.

Since Lomustine may cause liver dysfunction, it is recommended that liver function tests be monitored periodically.

Lomustine is carcinogenic in rats and mice, producing a marked increase in tumor incidence in doses approximating those employed clinically. Nitrosourea therapy does have carcinogenic potential in humans (see ADVERSE REACTIONS). Lomustine also affects fertility in male rats at doses somewhat higher than the human dose.

No data from clinical studies of Lomustine are available for patients 65 years of age and over to determine whether they respond differently than younger patients. Other reported clinical experience has not identified differences in responses between elderly and younger patients. In general, dose selection for an elderly patient should be cautious, reflecting the greater frequency of decreased hepatic, renal, or cardiac function and of concomitant disease or other drug therapy.

Lomustine and its metabolites are known to be substantially excreted by the kidney, and the risk of toxic reactions to this drug may be greater in patients with impaired renal function. Because elderly patients are more likely to have decreased renal function, care should be taken in dose selection, and renal function should be monitored.

The most frequent and most serious toxicity of Lomustine is delayed myelosuppression. It usually occurs 4 to 6 weeks after drug administration and is dose related. Thrombocytopenia occurs at about 4 weeks postadministration and persists for 1 to 2 weeks. Leukopenia occurs at 5 to 6 weeks after a dose of Lomustine and persists for 1 to 2 weeks. Approximately 65% of patients receiving 130 mg/m 2 develop white blood counts below 5000 wbc/mm 3. Thirty-six percent developed white blood counts below 3000 wbc/mm 3. Thrombocytopenia is generally more severe than leukopenia. However, both may be dose-limiting toxicities.

The occurrence of acute leukemia and bone marrow dysplasias have been reported in patients following long-term nitrosourea therapy.

Anemia also occurs, but is less frequent and less severe than thrombocytopenia or leukopenia.

Delayed onset pulmonary fibrosis occurring up to 17 years after treatment has been reported in patients who received related nitrosoureas in childhood and early adolescence (1–16 years) combined with cranial radiotherapy for intracranial tumors. There appeared to be some late reduction of pulmonary function of all long-term survivors. This form of lung fibrosis may be slowly progressive and has resulted in death in some cases. In this long-term study of carmustine, all those initially treated at less than 5 years of age died of delayed pulmonary fibrosis.

Nausea and vomiting may occur 3 to 6 hours after an oral dose and usually last less than 24 hours. Prior administration of antiemetics is effective in diminishing and sometimes preventing this side effect. Nausea and vomiting can also be reduced if Lomustine is administered to fasting patients.

A reversible type of hepatic toxicity, manifested by increased transaminase, alkaline phosphatase, and bilirubin levels, has been reported in a small percentage of patients receiving Lomustine.

Stomatitis, alopecia, optic atrophy, and visual disturbances, such as blindness, have been reported infrequently.

Neurological reactions, such as disorientation, lethargy, ataxia, and dysarthria have been noted in some patients receiving Lomustine. However, the relationship to medication in these patients is unclear.

No proven antidotes have been established for Lomustine overdosage. In case of overdose, appropriate supportive measures should be taken.

The recommended dose of Lomustine in adult and pediatric patients as a single agent in previously untreated patients is 130 mg/m 2 as a single oral dose every 6 weeks (see PRECAUTIONS: Information for Patients and HOW SUPPLIED: Directions to the Pharmacist). In individuals with compromised bone marrow function, the dose should be reduced to 100 mg/m 2 every 6 weeks. When Lomustine is used in combination with other myelosuppressive drugs, the doses should be adjusted accordingly. All doses of Lomustine must be rounded to the nearest 10 mg by the prescriber (see HOW SUPPLIED).

Doses subsequent to the initial dose should be adjusted according to the hematologic response of the patient to the preceding dose. The following schedule is suggested as a guide to dosage adjustment:

A repeat course of Lomustine should not be given until circulating blood elements have returned to acceptable levels (platelets above 100,000/mm3; leukocytes above 4000/mm3), and this is usually in 6 weeks. Adequate number of neutrophils should be present on a peripheral blood smear. Blood counts should be monitored weekly and repeat courses should not be given before 6 weeks because the hematologic toxicity is delayed and cumulative.

Lomustine Capsules are available in individual bottles of 5 capsules each.

Directions to the Pharmacist

Confirm the total dose prescribed by the physician can be obtained by determining the appropriate combination of capsule strengths. Only the appropriate number of Lomustine capsules required for the administration of a single dose should be dispensed.

In order to provide the proper dose of Lomustine, patients should be aware that the prescribed dose may be made up of 2 or more different strengths and colors of capsules and that each strength must be dispensed separately. Inform patients that Lomustine is taken as a single oral dose and will not be repeated for at least 6 weeks. Daily use of the recommended dose may lead to toxicities and fatal outcomes.

Caution: DO NOT DISPENSE
ENTIRE CONTAINER. 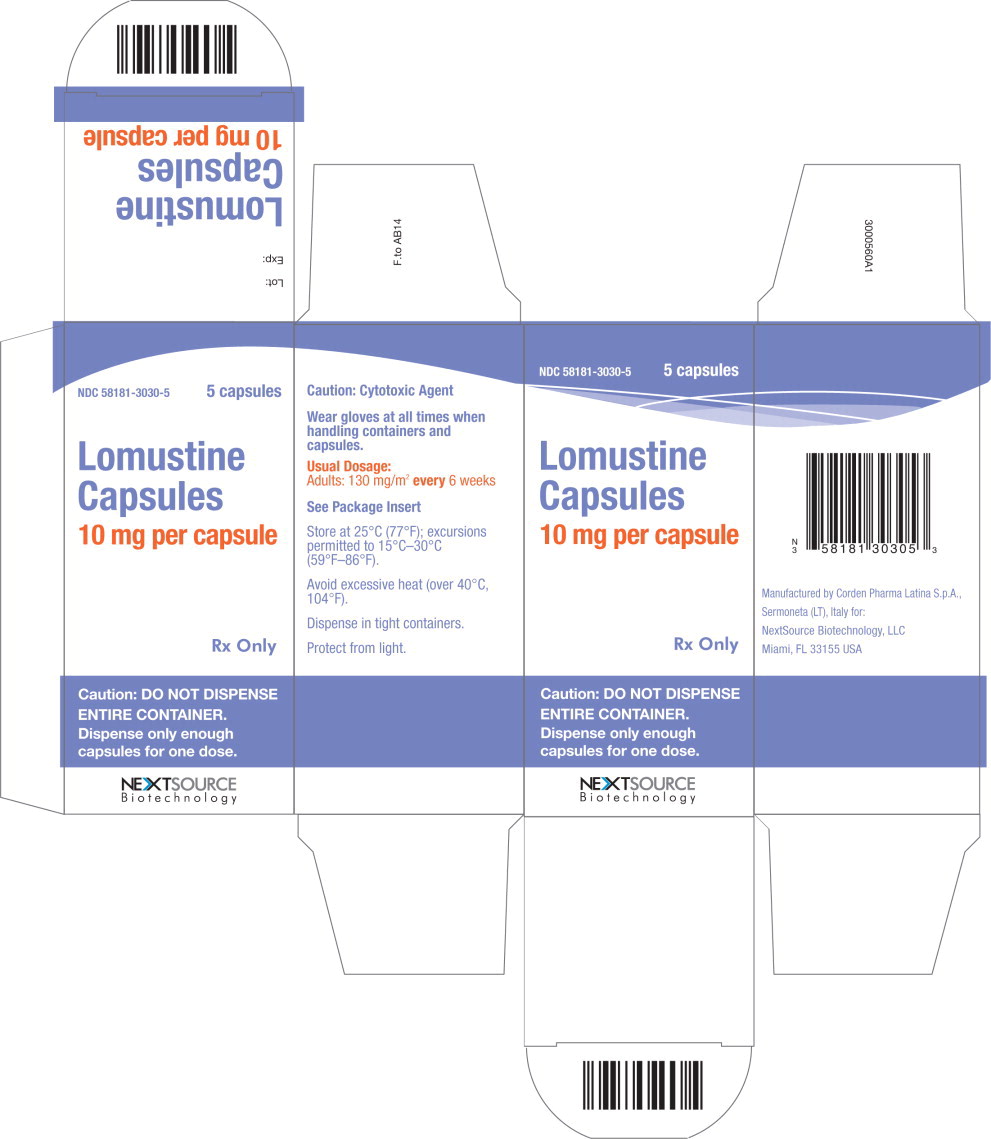 Rx only
Caution: DO NOT DISPENSE
ENTIRE CONTAINER. 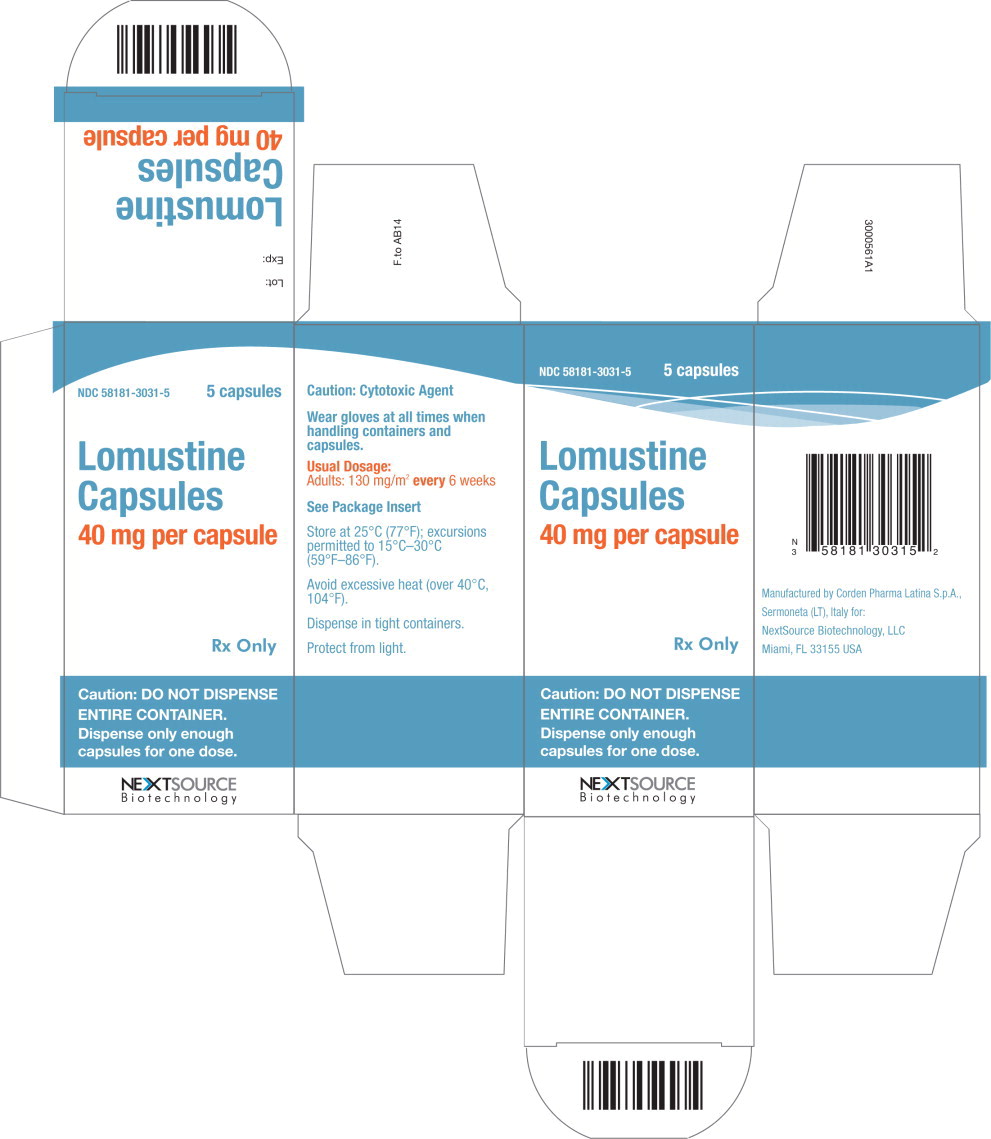 Caution: DO NOT DISPENSE
ENTIRE CONTAINER. 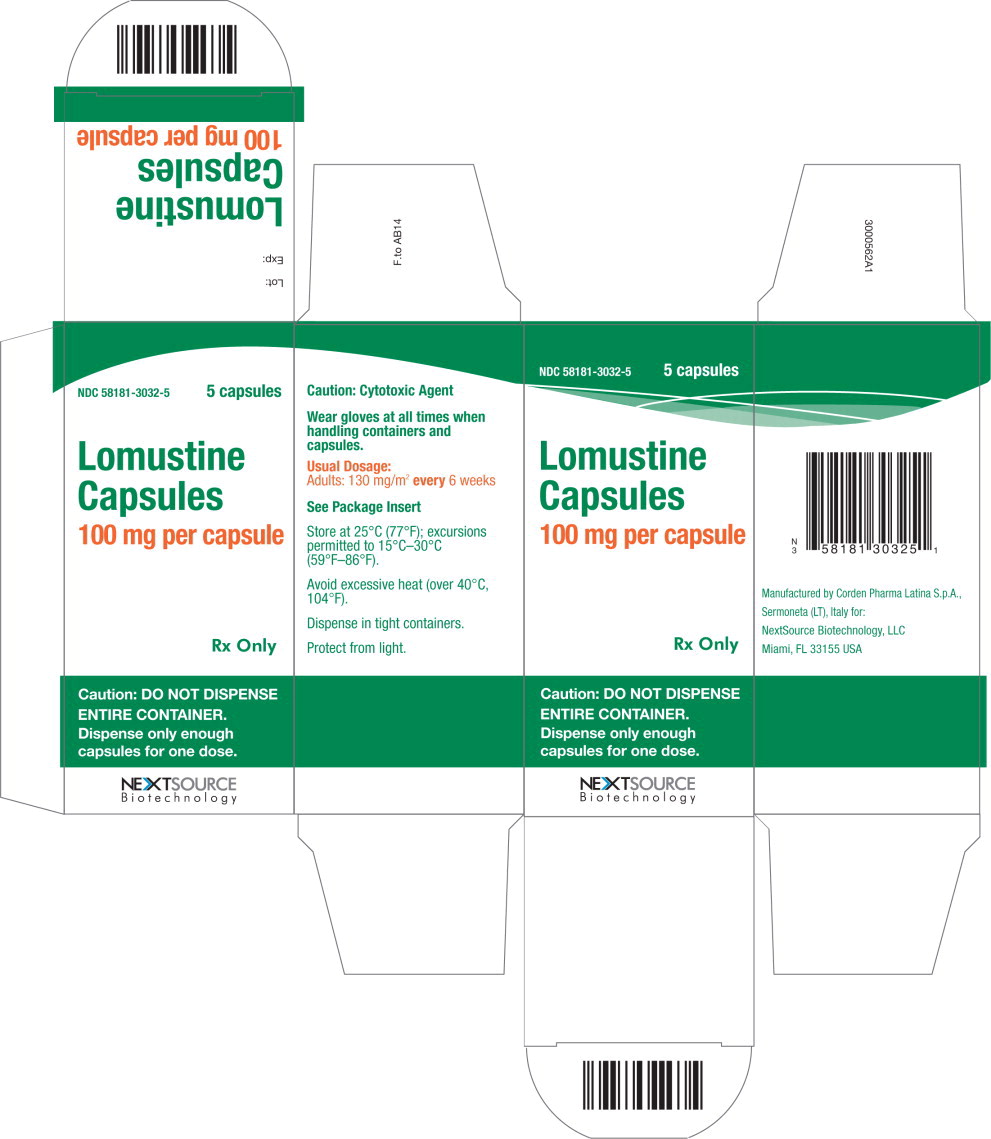