The structural formula is as shown below:

PRANDIN is indicated as an adjunct to diet and exercise to improve glycemic control in adults with type 2 diabetes mellitus.

PRANDIN is contraindicated in patients with:

PRANDIN is not indicated for use in combination with NPH-insulin (See ADVERSE REACTIONS, Cardiovascular Events ).

There have been no clinical studies establishing conclusive evidence of macrovascular risk reduction with PRANDIN or any other anti-diabetic drug.

Hypoglycemia: All oral blood glucose-lowering drugs including repaglinide are capable of producing hypoglycemia. Proper patient selection, dosage, and instructions to the patients are important to avoid hypoglycemic episodes. Hepatic insufficiency may cause elevated repaglinide blood levels and may diminish gluconeogenic capacity, both of which increase the risk of serious hypoglycemia. Elderly, debilitated, or malnourished patients, and those with adrenal, pituitary, hepatic, or severe renal insufficiency may be particularly susceptible to the hypoglycemic action of glucose-lowering drugs.

Hypoglycemia may be difficult to recognize in the elderly and in people taking beta-adrenergic blocking drugs. Hypoglycemia is more likely to occur when caloric intake is deficient, after severe or prolonged exercise, when alcohol is ingested, or when more than one glucose-lowering drug is used.

The frequency of hypoglycemia is greater in patients with type 2 diabetes who have not been previously treated with oral blood glucose-lowering drugs (naïve) or whose HbA1c is less than 8%. PRANDIN should be administered with meals to lessen the risk of hypoglycemia.

Loss of Control of Blood Glucose: When a patient stabilized on any diabetic regimen is exposed to stress such as fever, trauma, infection, or surgery, a loss of glycemic control may occur. At such times, it may be necessary to discontinue PRANDIN and administer insulin. The effectiveness of any hypoglycemic drug in lowering blood glucose to a desired level decreases in many patients over a period of time, which may be due to progression of the severity of diabetes or to diminished responsiveness to the drug. This phenomenon is known as secondary failure, to distinguish it from primary failure in which the drug is ineffective in an individual patient when the drug is first given. Adequate adjustment of dose and adherence to diet should be assessed before classifying a patient as a secondary failure.

Patients should be informed of the potential risks and advantages of PRANDIN and of alternative modes of therapy. They should also be informed about the importance of adherence to dietary instructions, of a regular exercise program, and of regular testing of blood glucose and HbA1c. The risks of hypoglycemia, its symptoms and treatment, and conditions that predispose to its development and concomitant administration of other glucose-lowering drugs should be explained to patients and responsible family members. Primary and secondary failure should also be explained.

Patients should be instructed to take PRANDIN before meals (2, 3, or 4 times a day preprandially). Doses are usually taken within 15 minutes of the meal but time may vary from immediately preceding the meal to as long as 30 minutes before the meal. Patients who skip a meal (or add an extra meal) should be instructed to skip (or add) a dose for that meal.

Response to all diabetic therapies should be monitored by periodic measurements of fasting blood glucose and glycosylated hemoglobin levels with a goal of decreasing these levels towards the normal range. During dose adjustment, fasting glucose can be used to determine the therapeutic response. Thereafter, both glucose and glycosylated hemoglobin should be monitored. Glycosylated hemoglobin may be especially useful for evaluating long-term glycemic control. Postprandial glucose level testing may be clinically helpful in patients whose pre-meal blood glucose levels are satisfactory but whose overall glycemic control (HbA1c) is inadequate.

In vitro data indicate that PRANDIN is metabolized by cytochrome P450 enzymes 2C8 and 3A4.  Consequently, repaglinide metabolism may be altered by drugs which influence these cytochrome P450 enzyme systems via induction and inhibition.  Caution should therefore be used in patients who are on PRANDIN and taking inhibitors and/or inducers of CYP2C8 and CYP3A4. The effect may be very significant if both enzymes are inhibited at the same time resulting in a substantial increase in repaglinide plasma concentrations. Drugs that are known to inhibit CYP3A4 include antifungal agents like ketoconazole, itraconazole, and antibacterial agents like erythromycin. Drugs that are known to inhibit CYP2C8 include agents like trimethoprim, gemfibrozil and montelukast. Drugs that induce the CYP3A4 and/or 2C8 enzyme systems include rifampin, barbiturates, and carbamezapine. See CLINICAL PHARMACOLOGY section, Drug-Drug Interactions.

Carcinogenesis, Mutagenesis, and Impairment Of Fertility

Repaglinide was non-genotoxic in a battery of in vivo and in vitro studies: Bacterial mutagenesis (Ames test), in vitro forward cell mutation assay in V79 cells (HGPRT), in vitro chromosomal aberration assay in human lymphocytes, unscheduled and replicating DNA synthesis in rat liver, and in vivo mouse and rat micronucleus tests.

Teratogenic Effects: Safety in pregnant women has not been established. Repaglinide was not teratogenic in rats or rabbits at doses 40 times (rats) and approximately 0.8 times (rabbit) clinical exposure (on a mg/m2 basis) throughout pregnancy. Because animal reproduction studies are not always predictive of human response, PRANDIN should be used during pregnancy only if it is clearly needed.

Nonteratogenic Effects: Offspring of rat dams exposed to repaglinide at 15 times clinical exposure on a mg/m2 basis during days 17 to 22 of gestation and during lactation developed nonteratogenic skeletal deformities consisting of shortening, thickening, and bending of the humerus during the postnatal period. This effect was not seen at doses up to 2.5 times clinical exposure (on a mg/m2 basis) on days 1 to 22 of pregnancy or at higher doses given during days 1 to 16 of pregnancy. Relevant human exposure has not occurred to date and therefore the safety of PRANDIN administration throughout pregnancy or lactation cannot be established.

In rat reproduction studies, measurable levels of repaglinide were detected in the breast milk of the dams and lowered blood glucose levels were observed in the pups. Cross fostering studies indicated that skeletal changes (see Nonteratogenic Effects) could be induced in control pups nursed by treated dams, although this occurred to a lesser degree than those pups treated in utero. Although it is not known whether repaglinide is excreted in human milk some oral agents are known to be excreted by this route. Because the potential for hypoglycemia in nursing infants may exist, and because of the effects on nursing animals, a decision should be made as to whether PRANDIN should be discontinued in nursing mothers, or if mothers should discontinue nursing. If PRANDIN is discontinued and if diet alone is inadequate for controlling blood glucose, insulin therapy should be considered.

No studies have been performed in pediatric patients.

In repaglinide clinical studies of 24 weeks or greater duration, 415 patients were over 65 years of age. In one-year, active-controlled trials, no differences were seen in effectiveness or adverse events between these subjects and those less than 65 other than the expected age-related increase in cardiovascular events observed for PRANDIN and comparator drugs. There was no increase in frequency or severity of hypoglycemia in older subjects. Other reported clinical experience has not identified differences in responses between the elderly and younger patients, but greater sensitivity of some older individuals to PRANDIN therapy cannot be ruled out.

PRANDIN has been administered to 2931 individuals during clinical trials. Approximately 1500 of these individuals with type 2 diabetes have been treated for at least 3 months, 1000 for at least 6 months, and 800 for at least 1 year. The majority of these individuals (1228) received PRANDIN in one of five 1-year, active-controlled trials. The comparator drugs in these 1-year trials were oral sulfonylurea drugs (SU) including glyburide and glipizide. Over one year, 13% of PRANDIN patients were discontinued due to adverse events, as were 14% of SU patients. The most common adverse events leading to withdrawal were hyperglycemia, hypoglycemia, and related symptoms (see PRECAUTIONS). Mild or moderate hypoglycemia occurred in 16% of PRANDIN patients, 20% of glyburide patients, and 19% of glipizide patients.

The table below lists common adverse events for PRANDIN patients compared to both placebo (in trials 12 to 24 weeks duration) and to glyburide and glipizide in one year trials. The adverse event profile of PRANDIN was generally comparable to that for sulfonylurea drugs (SU).

In one-year trials comparing PRANDIN to sulfonylurea drugs, the incidence of angina was comparable (1.8%) for both treatments, with an incidence of chest pain of 1.8% for PRANDIN and 1.0% for sulfonylureas. The incidence of other selected cardiovascular events (hypertension, abnormal EKG, myocardial infarction, arrhythmias, and palpitations) was ≤ 1% and not different between PRANDIN and the comparator drugs.

The incidence of total serious cardiovascular adverse events, including ischemia, was higher for repaglinide (4%) than for sulfonylurea drugs (3%) in controlled comparator clinical trials. In 1-year controlled trials, PRANDIN treatment was not associated with excess mortality when compared to the rates observed with other oral hypoglycemic agent therapies

In a clinical trial, patients received increasing doses of PRANDIN up to 80 mg a day for 14 days. There were few adverse effects other than those associated with the intended effect of lowering blood glucose. Hypoglycemia did not occur when meals were given with these high doses. Hypoglycemic symptoms without loss of consciousness or neurologic findings should be treated aggressively with oral glucose and adjustments in drug dosage and/or meal patterns. Close monitoring may continue until the physician is assured that the patient is out of danger. Patients should be closely monitored for a minimum of 24 to 48 hours, since hypoglycemia may recur after apparent clinical recovery. There is no evidence that repaglinide is dialyzable using hemodialysis.

Severe hypoglycemic reactions with coma, seizure, or other neurological impairment occur infrequently, but constitute medical emergencies requiring immediate hospitalization. If hypoglycemic coma is diagnosed or suspected, the patient should be given a rapid intravenous injection of concentrated (50%) glucose solution. This should be followed by a continuous infusion of more dilute (10%) glucose solution at a rate that will maintain the blood glucose at a level above 100 mg/dL.

There is no fixed dosage regimen for the management of type 2 diabetes with PRANDIN.

The patient's blood glucose should be monitored periodically to determine the minimum effective dose for the patient; to detect primary failure, i.e., inadequate lowering of blood glucose at the maximum recommended dose of medication; and to detect secondary failure, i.e., loss of an adequate blood glucose-lowering response after an initial period of effectiveness. Glycosylated hemoglobin levels are of value in monitoring the patient's longer term response to therapy.

Short-term administration of PRANDIN may be sufficient during periods of transient loss of control in patients usually well controlled on diet.

PRANDIN doses are usually taken within 15 minutes of the meal but time may vary from immediately preceding the meal to as long as 30 minutes before the meal. 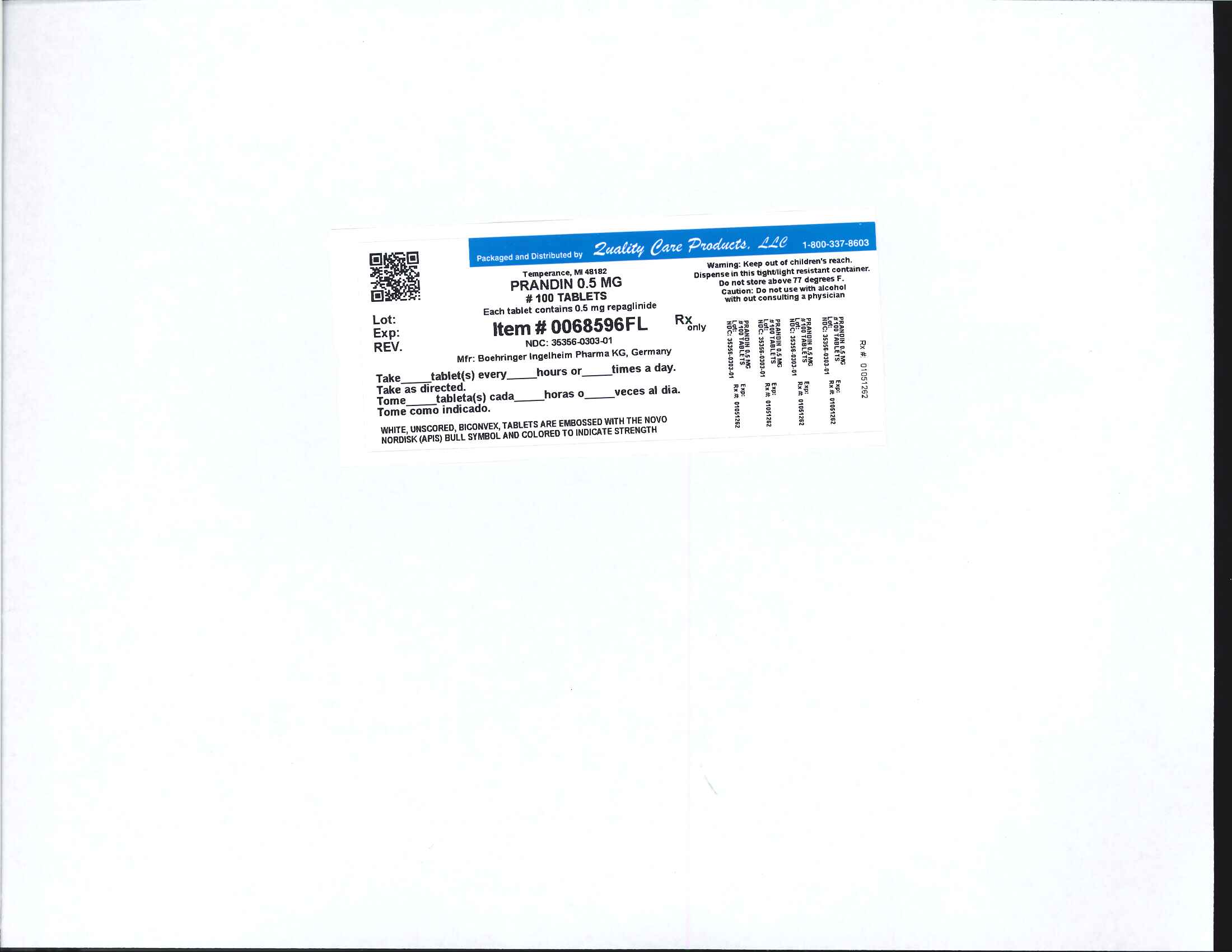