Latanoprost is a prostaglandin F2α analogue. Its chemical name is isopropyl-(Z)-7 [(1R,2R,3R,5S)3,5-dihydroxy-2-[(3R)-3-hydroxy-5-phenylpentyl]cyclopentyl]-5-heptenoate. Its molecular formula is C26H40O5 and its chemical structure is:

Latanoprost is a prostanoid selective FP receptor agonist that is believed to reduce the intraocular pressure (IOP) by increasing the outflow of aqueous humor. Studies in animals and man suggest that the main mechanism of action is increased uveoscleral outflow. Elevated IOP represents a major risk factor for glaucomatous field loss. The higher the level of IOP, the greater the likelihood of optic nerve damage and visual field loss.

Latanoprost is absorbed through the cornea where the isopropyl ester prodrug is hydrolyzed to the acid form to become biologically active. Studies in man indicate that the peak concentration in the aqueous humor is reached about two hours after topical administration.

The distribution volume in humans is 0.16 ± 0.02 L/kg. The acid of latanoprost can be measured in aqueous humor during the first 4 hours, and in plasma only during the first hour after local administration.

Latanoprost, an isopropyl ester prodrug, is hydrolyzed by esterases in the cornea to the biologically active acid. The active acid of latanoprost reaching the systemic circulation is primarily metabolized by the liver to the 1,2-dinor and 1,2,3,4-tetranor metabolites via fatty acid β-oxidation.

The elimination of the acid of latanoprost from human plasma is rapid (t1/2 = 17 min) after both intravenous and topical administration. Systemic clearance is approximately 7 mL/min/kg. Following hepatic β-oxidation, the metabolites are mainly eliminated via the kidneys. Approximately 88% and 98% of the administered dose are recovered in the urine after topical and intravenous dosing, respectively.

Ocular administration of latanoprost at a dose of 6 µg/eye/day (4 times the daily human dose) to cynomolgus monkeys has also been shown to induce increased palpebral fissure. This effect was reversible upon discontinuation of the drug.

XALATAN Sterile Ophthalmic Solution is indicated for the reduction of elevated intraocular pressure in patients with open-angle glaucoma or ocular hypertension.

Patients with mean baseline intraocular pressure of 24 – 25 mmHg who were treated for 6 months in multi-center, randomized, controlled trials demonstrated 6 – 8 mmHg reductions in intraocular pressure. This IOP reduction with XALATAN Sterile Ophthalmic Solution 0.005% dosed once daily was equivalent to the effect of timolol 0.5% dosed twice daily.

A 3-year open-label, prospective safety study with a 2-year extension phase was conducted to evaluate the progression of increased iris pigmentation with continuous use of XALATAN once-daily as adjunctive therapy in 519 patients with open-angle glaucoma. The analysis was based on observed-cases population of the 380 patients who continued in the extension phase.

Known hypersensitivity to latanoprost, benzalkonium chloride, or any other ingredients in this product.

XALATAN Sterile Ophthalmic Solution may gradually increase the pigmentation of the iris. The eye color change is due to increased melanin content in the stromal melanocytes of the iris rather than to an increase in the number of melanocytes. This change may not be noticeable for several months to years (see WARNINGS). Typically, the brown pigmentation around the pupil spreads concentrically towards the periphery of the iris and the entire iris or parts of the iris become more brownish. Neither nevi nor freckles of the iris appear to be affected by treatment. While treatment with XALATAN can be continued in patients who develop noticeably increased iris pigmentation, these patients should be examined regularly.

During clinical trials, the increase in brown iris pigment has not been shown to progress further upon discontinuation of treatment, but the resultant color change may be permanent.

Eyelid skin darkening, which may be reversible, has been reported in association with the use of XALATAN (see WARNINGS).

XALATAN may gradually change eyelashes and vellus hair in the treated eye; these changes include increased length, thickness, pigmentation, the number of lashes or hairs, and misdirected growth of eyelashes. Eyelash changes are usually reversible upon discontinuation of treatment.

There is limited experience with XALATAN in the treatment of angle closure, inflammatory or neovascular glaucoma.

There have been reports of bacterial keratitis associated with the use of multiple-dose containers of topical ophthalmic products. These containers had been inadvertently contaminated by patients who, in most cases, had a concurrent corneal disease or a disruption of the ocular epithelial surface (see PRECAUTIONS, Information for Patients).

Contact lenses should be removed prior to the administration of XALATAN, and may be reinserted 15 minutes after administration (see PRECAUTIONS, Information for Patients).

Patients should also be informed of the possibility of eyelash and vellus hair changes in the treated eye during treatment with XALATAN. These changes may result in a disparity between eyes in length, thickness, pigmentation, number of eyelashes or vellus hairs, and/or direction of eyelash growth. Eyelash changes are usually reversible upon discontinuation of treatment.

Patients should be instructed to avoid allowing the tip of the dispensing container to contact the eye or surrounding structures because this could cause the tip to become contaminated by common bacteria known to cause ocular infections. Serious damage to the eye and subsequent loss of vision may result from using contaminated solutions.

Patients also should be advised that if they develop an intercurrent ocular condition (e.g., trauma or infection) or have ocular surgery, they should immediately seek their physician's advice concerning the continued use of the multiple-dose container.

Patients should be advised that if they develop any ocular reactions, particularly conjunctivitis and lid reactions, they should immediately seek their physician's advice.

If more than one topical ophthalmic drug is being used, the drugs should be administered at least five (5) minutes apart.

In vitro studies have shown that precipitation occurs when eye drops containing thimerosal are mixed with XALATAN. If such drugs are used, they should be administered at least five (5) minutes apart.

Latanoprost was not mutagenic in bacteria, in mouse lymphoma, or in mouse micronucleus tests.

Chromosome aberrations were observed in vitro with human lymphocytes.

Latanoprost was not carcinogenic in either mice or rats when administered by oral gavage at doses of up to 170 µg/kg/day (approximately 2800 times the recommended maximum human dose) for up to 20 and 24 months, respectively.

Additional in vitro and in vivo studies on unscheduled DNA synthesis in rats were negative. Latanoprost has not been found to have any effect on male or female fertility in animal studies.

Reproduction studies have been performed in rats and rabbits. In rabbits, an incidence of 4 of 16 dams had no viable fetuses at a dose that was approximately 80 times the maximum human dose, and the highest nonembryocidal dose in rabbits was approximately 15 times the maximum human dose. There are no adequate and well-controlled studies in pregnant women. XALATAN should be used during pregnancy only if the potential benefit justifies the potential risk to the fetus.

Adverse events referred to in other sections of this insert

The ocular adverse events and ocular signs and symptoms reported in 5 to 15% of the patients on XALATAN Sterile Ophthalmic Solution in the three 6-month, multi-center, double-masked, active-controlled trials were blurred vision, burning and stinging, conjunctival hyperemia, foreign body sensation, itching, increased pigmentation of the iris, and punctate epithelial keratopathy.

In addition to the above listed ocular events/signs and symptoms, the following were reported in 1 to 4% of the patients: dry eye, excessive tearing, eye pain, lid crusting, lid discomfort/pain, lid edema, lid erythema, and photophobia.

The following events were reported in less than 1% of the patients: conjunctivitis, diplopia, and discharge from the eye.

During clinical studies, there were extremely rare reports of the following: retinal artery embolus, retinal detachment, and vitreous hemorrhage from diabetic retinopathy.

The following events have been identified during postmarketing use of XALATAN in clinical practice. Because they are reported voluntarily from a population of unknown size, estimates of frequency cannot be made. The events, which have been chosen for inclusion due to either their seriousness, frequency of reporting, possible causal connection to XALATAN, or a combination of these factors, include: asthma and exacerbation of asthma; corneal edema and erosions; dyspnea; eyelash and vellus hair changes (increased length, thickness, pigmentation, and number); eyelid skin darkening; herpes keratitis; intraocular inflammation (iritis/uveitis); keratitis; macular edema, including cystoid macular edema; misdirected eyelashes sometimes resulting in eye irritation; dizziness, headache, and toxic epidermal necrolysis; periorbital and lid changes resulting in deepening of the eyelid sulcus.

Apart from ocular irritation and conjunctival or episcleral hyperemia, the ocular effects of latanoprost administered at high doses are not known. Intravenous administration of large doses of latanoprost in monkeys has been associated with transient bronchoconstriction; however, in 11 patients with bronchial asthma treated with latanoprost, bronchoconstriction was not induced. Intravenous infusion of up to 3 µg/kg in healthy volunteers produced mean plasma concentrations 200 times higher than during clinical treatment and no adverse reactions were observed. Intravenous dosages of 5.5 to 10 µg/kg caused abdominal pain, dizziness, fatigue, hot flushes, nausea, and sweating.

If overdosage with XALATAN Sterile Ophthalmic Solution occurs, treatment should be symptomatic.

The recommended dosage is one drop (1.5 µg) in the affected eye(s) once daily in the evening. If one dose is missed, treatment should continue with the next dose as normal.

Reduction of the intraocular pressure starts approximately 3 to 4 hours after administration and the maximum effect is reached after 8 to 12 hours.

Multi-Pack
Three 2.5 mL bottles
Not to be sold separately. 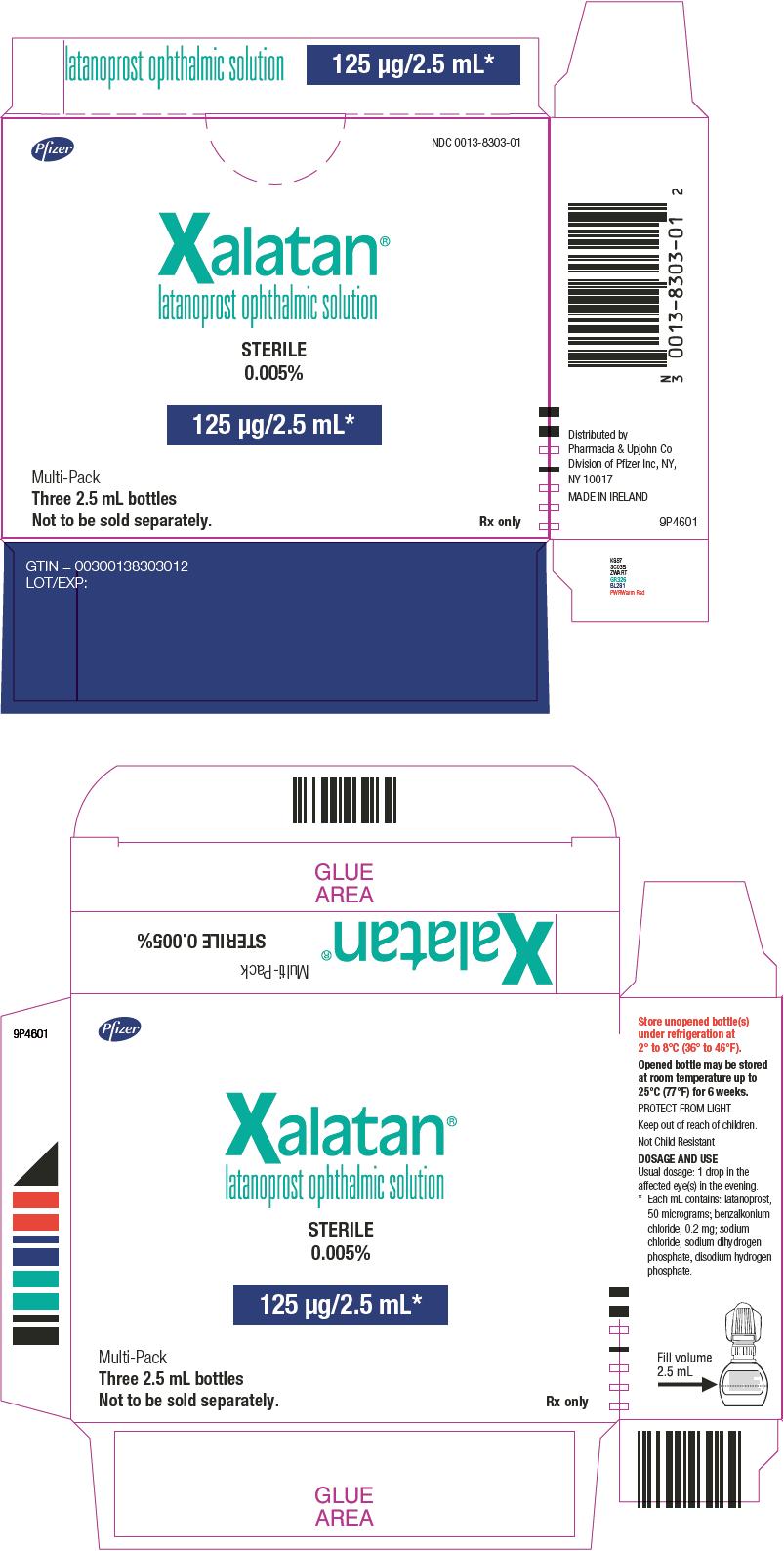