CORGARD (nadolol) specifically competes with beta-adrenergic receptor agonists for available beta receptor sites; it inhibits both the beta1 receptors located chiefly in cardiac muscle and the beta2 receptors located chiefly in the bronchial and vascular musculature, inhibiting the chronotropic, inotropic, and vasodilator responses to beta-adrenergic stimulation proportionately. CORGARD has no intrinsic sympathomimetic activity and, unlike some other beta-adrenergic blocking agents, nadolol has little direct myocardial depressant activity and does not have an anesthetic-like membrane- stabilizing action. Animal and human studies show that CORGARD slows the sinus rate and depresses AV conduction. In dogs, only minimal amounts of nadolol were detected in the brain relative to amounts in blood and other organs and tissues. CORGARD has low lipophilicity as determined by octanol/water partition coefficient, a characteristic of certain beta-blocking agents that has been correlated with the limited extent to which these agents cross the blood-brain barrier, their low concentration in the brain, and low incidence of CNS-related side effects.

In controlled clinical studies, CORGARD (nadolol) at doses of 40 to 320 mg/day has been shown to decrease both standing and supine blood pressure, the effect persisting for approximately 24 hours after dosing.

By blocking catecholamine-induced increases in heart rate, velocity and extent of myocardial contraction, and blood pressure, CORGARD (nadolol) generally reduces the oxygen requirements of the heart at any given level of effort, making it useful for many patients in the long-term management of angina pectoris. On the other hand, nadolol can increase oxygen requirements by increasing left ventricular fiber length and end diastolic pressure, particularly in patients with heart failure.

CORGARD (nadolol) is indicated for the long-term management of patients with angina pectoris.

CORGARD (nadolol) is indicated for the treatment of hypertension, to lower blood pressure. Lowering blood pressure reduces the risk of fatal and nonfatal cardiovascular events, primarily strokes and myocardial infarctions. These benefits have been seen in controlled trials of antihypertensive drugs from a wide variety of pharmacologic classes including the class to which this drug principally belongs. There are no controlled trials demonstrating risk reduction with CORGARD.

CORGARD (nadolol) may be used alone or in combination with other antihypertensive agents, especially thiazide-type diuretics.

Exacerbation of Ischemic Heart Disease Following Abrupt Withdrawal—Hypersensitivity to catecholamines has been observed in patients withdrawn from beta-blocker therapy; exacerbation of angina and, in some cases, myocardial infarction have occurred after abrupt discontinuation of such therapy. When discontinuing chronically administered nadolol, particularly in patients with ischemic heart disease, the dosage should be gradually reduced over a period of one to two weeks and the patient should be carefully monitored. If angina markedly worsens or acute coronary insufficiency develops, nadolol administration should be reinstituted promptly, at least temporarily, and other measures appropriate for the management of unstable angina should be taken. Patients should be warned against interruption or discontinuation of therapy without the physician's advice. Because coronary artery disease is common and may be unrecognized, it may be prudent not to discontinue nadolol therapy abruptly even in patients treated only for hypertension.

Nadolol is excreted in human milk. Because of the potential for adverse effects in nursing infants, a decision should be made whether to discontinue nursing or to discontinue therapy taking into account the importance of CORGARD (nadolol) to the mother.

DOSAGE MUST BE INDIVIDUALIZED. CORGARD (NADOLOL) MAY BE ADMINISTERED WITHOUT REGARD TO MEALS. 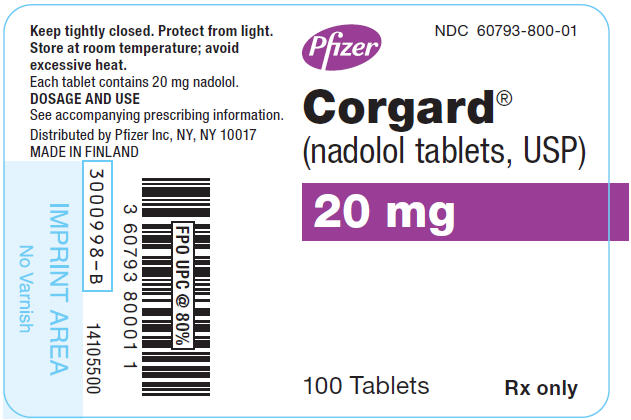 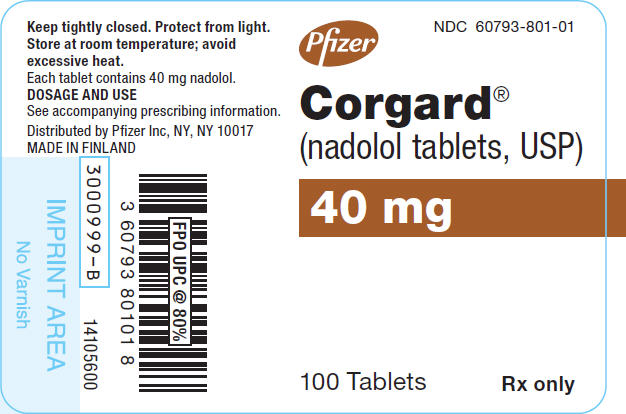 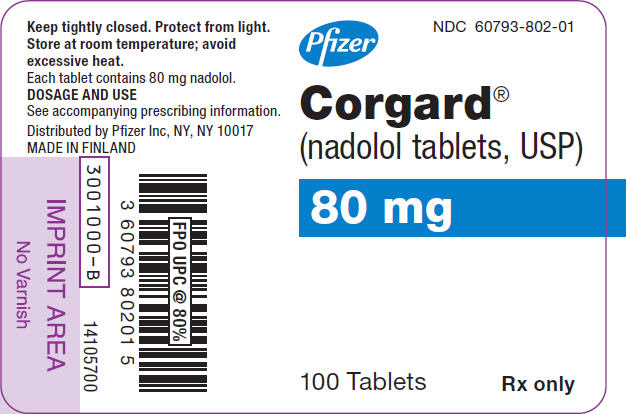