The Chemical Abstracts name of glipizide is 1-cyclohexyl-3-[[p-[2-(5-methylpyrazine- carboxamido)ethyl]phenyl]sulfonyl]urea and has the following structural formula:

Glipizide is a whitish, odorless powder with a pKa of 5.9. it is insoluble in water and alcohols, but soluble in 0.1 N NaOH; it is freely soluble in dimethylformamide. Glipize tablets for oral urse are available in 5 and 10 mg strengths.

The primary mode of action of glipizide in experimental animals appears to be the stimulation of insulin secretion from the beta cells of pancreatic islet tissue and is thus dependent on functioning beta cells in the pancreatic islets. In humans, glipizide appears to lower the blood glucose acutely by stimulating the release of insulin from the pancreas, an effect dependent upon functioning beta cells in the pancreatic islets. The mechanism by which glipizide lowers blood glucose during long-term administration has not been clearly established. In man, stimulation of insulin secretion by glipizide in response to a meal is undoubtedly of major importance. Fasting insulin levels are not elevated even on long-term glipizide administration, but the postprandial insulin response continues to be enhanced after at least 6 months of treatment. The insulinotropic response to a meal occurs within 30 minutes after an oral dose of glipizide in diabetic patients, but elevated insulin levels do not persist beyond the time of the meal challenge. Extrapancreatic effects may play a part in the mechanism of action of oral sulfonylurea hypoglycemic drugs.

Blood sugar control persists in some patients for up to 24 hours after a single dose of glipizide, even though plasma levels have declined to a small fraction of peak levels by that time (see

Some patients fail to respond initially, or gradually lose their responsiveness to sulfonylurea drugs, including glipizide. Alternatively, glipizide may be effective in some patients who have not responded or have ceased to respond to other sulfonylureas

It has been shown that glipizide therapy was effective in controlling blood sugar without deleterious changes in the plasma lipoprotein profiles of patients treated for NIDDM.

In a placebo-controlled, crossover study in normal volunteers, glipizide had no antidiuretic activity and, in fact, led to a slight increase in free water clearance.

Gastrointestinal absorption of glipizide in man is uniform, rapid, and essentially complete. Peak plasma concentrations occur 1 to 3 hours after a single oral dose. The half-life of elimination ranges from 2 to 4 hours in normal subjects, whether given intravenously or orally. The metabolic and excretory patterns are similar with the two routes of administration, indicating that first-pass metabolism is not significant. Glipizide does not accumulate in plasma on repeated oral administration. Total absorption and disposition of an oral dose was unaffected by food in normal volunteers, but absorption was delayed by about 40 minutes. Thus, glipizide was more effective when administered about 30 minutes before, rather than with, a test meal in diabetic patients. Protein binding was studied in serum from volunteers who received either oral or intravenous glipizide and found to be 98 to 99% one hour after either route of administration. The apparent volume of distribution of glipizide after intravenous administration was 11 liters, indicative of localization within the extracellular fluid compartment. In mice, no glipizide or metabolites were detectable autoradiographically in the brain or spinal cord of males or females, nor in the fetuses of pregnant females. In another study, however, very small amounts of radioactivity were detected in the fetuses of rats given labelled drug.

Glipizide Tablets USP are indicated as an adjunct to diet and exercise to improve glycemic control in adults with type 2 diabetes mellitus.

Glipizide tablets are contraindicated in patients with:

1.Known hypersensitivity to the drug.

2.Type 1 diabetes mellitus, diabetic ketoacidosis, with or without coma. This condition should be treated with insulin.

The administration of oral hypoglycemic drugs has been reported to be associated with increased cardiovascular mortality as compared to treatment with diet alone or diet plus insulin. This warning is based on the study conducted by the University Group Diabetes Program (UGDP), a long-term prospective clinical trial designed to evaluate the effectiveness of glucose-lowering drugs in preventing or delaying vascular complications in patients with non-insulin-dependent diabetes. The study involved 823 patients who were randomly assigned to one of four treatment groups (Diabetes, 19, supp. 2:747-830, 1970).

UGDP reported that patients treated for 5 to 8 years with diet plus a fixed dose of tolbutamide (1.5 grams per day) had a rate of cardiovascular mortality approximately 21/2 times that of patients treated with diet alone. A significant increase in total mortality was not observed, but the use of tolbutamide was discontinued based on the increase in cardiovascular mortality, thus limiting the opportunity for the study to show an increase in overall mortality. Despite controversy regarding the interpretation of these results, the findings of the UGDP study provide an adequate basis for this warning. The patient should be informed of the potential risks and advantages of glipizide and of alternative modes of therapy.

Although only one drug in the sulfonylurea class (tolbutamide) was included in this study, it is prudent from a safety standpoint to consider that this warning may also apply to other oral hypoglycemic drugs in this class, in view of their close similarities in mode of action and chemical structure.

Gastrointestinal disturbances are the most common reactions. Gastrointestinal complaints were reported with the following apprroximate incidence: nuasea and diarrhea, one in seventy; constipation and gastralgia, one in one hundred. They appear to be dose-related and may disappear on division or reduction of dosage. Cholestatic jaundice may occur rarely with sulfonyluras: Glipizide should be discontinued if this occurs.

Allergic skin reactions including erythema, morbilliform of maculopapular eruptions, urticaria, pruritus, and eczema have been reported in about one in seventy patients. These may be transent and may disappear despite continued use of glipizide; if skin reactions persist, the drug should be discontinued. Porphyria cutanea tarda and photosensitivity reactions have been reported with sulfonyluras.

Hepatic porphyria and disulfiram-like reactions have been reported with sulfonylureas. In the mouse, glipizide pretreatment did not cause an accumulation of acetaldehyde after ethanol administration. Clinical experience to date has shown that glipizide has an extremely low incidence of disulfiram-like alcohol reactions.

Cases of hyponatremia and the syndrome of inappropriate antidiuretic hormone (SIADH) secretion have been reported with this and other sulfonylureas.

Dizziness, drowsiness, and headache have each been reported in about one in fifty patients treated with glipizide. They are usually transient and seldom require discontinuance of therapy.

The pattern of laboratory test abnormalities observed with glipizide was similar to that for other sulfonylureas. Occasional mild to moderate elevations of SGOT, LDH, alkaline phosphatase, BUN, and creatinine were noted. One case of jaundice was reported. The relationship of these abnormalities to glipizide is uncertain, and they have rarely been associated with clinical symptoms.

The following adverse events have been reported in postmarketing surveillance:

Cholestatic and hepatocellular forms of liver injury accompanied by jaundice have been reported rarely in association with glipizide; glipizide tablets should be discontinued if this occurs.

There is no well documented experience with glipizide overdosage. The acute oral toxicity was extremely low in all species tested (LD50 greater than 4 g/kg).

Overdosage of sulfonylureas, including glipizide, can produce hypoglycemia. Mild hypoglycemic symptoms without loss of consciousness or neurologic findings should be treated aggressively with oral glucose and adjustments in drug dosage and/or meal patterns. Close monitoring should continue until the physician is assured that the patient is out of danger. Severe hypoglycemic reactions with coma, seizure, or other neurological impairment occur infrequently, but constitute medical emergencies requiring immediate hospitalization. If hypoglycemic coma is diagnosed or suspected, the patient should be given a rapid intravenous injection of concentrated (50%) glucose solution. This should be followed by a continuous infusion of a more dilute (10%) glucose solution at a rate that will maintain the blood glucose at a level above 100 mg/dL. Patients should be closely monitored for a minimum of 24 to 48 hours since hypoglycemia may recur after apparent clinical recovery. Clearance of glipizide from plasma would be prolonged in persons with liver disease. Because of the extensive protein binding of glipizide, dialysis is unlikely to be of benefit.

There is no fixed dosage regimen for the management of diabetes mellitus with glipizide or any other hypoglycemic agent. In addition to the usual monitoring of urinary glucose, the patient's blood glucose must also be monitored periodically to determine the minimum effective dose for the patient; to detect primary failur, i.e., inadequtate loss of an adequate blood-glucose-lowering repsonse after an intital period of effectiveness. Glycosylated hemoglobin levels may also be of value in monitoring the patient's response to therapy.

Short-term administration of glipizide may be sufficient during periods of transient loss of control in patients usually controlled well on diet.

In general, glipizide should be given approximately 30 minutes before a meal to achieve the greatest reduction in postprandial hyperglycemia.

The recommended starting dose is 5 mg, given before breakfast. Geriatric patients or those with liver disease may be started on 2.5 mg.

Dosage adjustments should ordinarily be in increments of 2.5 to 5 mg, as determined by blood glucose response. At least several days should elapse between titration steps. If response to a single dose is not satisfactory, dividing that dose may prove effective. The maximum recommended once daily dose is 15 mg. Doses above 15 mg should ordinarily be divided and given before meals of adequate caloric content. The maximum recommended total daily dose is 40 mg.

In elderly patients, debilitated or malnourished patients, and patients with impaired renal or hepatic function, the initial and maintenance dosing should be conservative to avoid hypoglycemic reactions (see PRECAUTIONS section).

As with other sulfonylurea-class hypoglycemics, many stable non-insulin-dependent diabetic patients receiving insulin may be safely placed on glipizide. When transferring patients from insulin to glipizide, the following general guidelines should be considered:

For patients whose daily insulin requirement is 20 units or less, insulin may be discontinued and glipizide therapy may begin at usual dosages. Several days should elapse between glipizide titration steps.

For patients whose daily insulin requirement is greater than 20 units, the insulin dose should be reduced by 50% and glipizide therapy may begin at usual dosages. Subsequent reductions in insulin dosage should depend on individual patient response. Several days should elapse between glipizide titration steps.

During the insulin withdrawal period, the patient should test urine samples for sugar and ketone bodies at least three times daily. Patients should be instructed to contact the prescriber immediately if these tests are abnormal. In some cases, especially when patient has been receiving greater than 40 units of insulin daily, it may be advisable to consider hospitalization during the transition period.

As with other sulfonylurea-class hypoglycemics, no transition period is necessary when transferring patients to glipizide. Patients should be observed carefully (1 to 2 weeks) for hypoglycemia when being transferred from longer half-life sulfonylureas (e.g., chlorpropamide) to glipizide due to potential overlapping of drug effect.

Glipizide Tablets USP, 5 mg are available as white to off-white, round, flat-faced, beveled-edge tablets, bisected and debossed on one side with "9201" above bisect and debossed with "TEVA" on the other side, containing 5 mg of glipizide, packaged in bottles of 100 and 500 tablets and unit-dose boxes of 100 tablets.

Glipizide Tablets USP, 10 mg are available as white to off-white, round, flat-faced, beveled-edge tablets, bisected and debossed on one side with "9200" above bisect and debossed with "TEVA" on the other side, containing 10 mg of glipizide, packaged in bottles of 100 and 500 tablets and unit-dose boxes of 100 tablets. 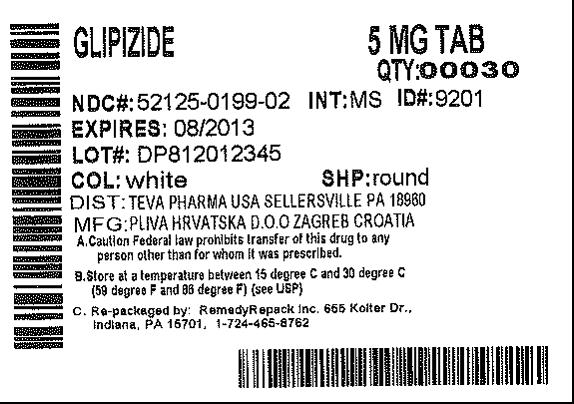