DepoCyt® (cytarabine liposome injection) is indicated for the intrathecal treatment of lymphomatous meningitis.

DepoCyt is a cytotoxic anticancer drug and, as with other potentially toxic compounds, caution should be used in handling DepoCyt. The use of gloves is recommended. If DepoCyt suspension contacts the skin, wash immediately with soap and water. If it contacts mucous membranes, flush thoroughly with water.

No further reconstitution or dilution is required. DepoCyt particles have a tendency to settle with time. Vials of DepoCyt should be allowed to warm to room temperature and gently agitated or inverted to re-suspend the particles immediately prior to withdrawal from the vial. Avoid aggressive agitation.

DepoCyt should be withdrawn from the vial immediately before administration. DepoCyt is a single dose vial and does not contain any preservative. DepoCyt should be used within 4 hours of withdrawal from the vial. Unused portions of each vial should be discarded properly [see How Supplied/ Storage and Handling (16)]. Do not save any unused portions for later administration. Do not mix DepoCyt with any other medications.

In-line filters must not be used when administering DepoCyt. DepoCyt is administered directly into the cerebrospinal fluid (CSF) via an intraventricular reservoir or by direct injection into the lumbar sac. DepoCyt should be injected slowly over a period of 1-5 minutes. Following drug administration by lumbar puncture, the patient should be instructed to lie flat for 1 hour. Patients should be observed by the physician for immediate toxic reactions.

For the treatment of lymphomatous meningitis, DepoCyt 50 mg (one vial of DepoCyt) is recommended to be given according to the following schedule:

Patients should be started on dexamethasone 4 mg twice a day either by mouth or intravenously for 5 days beginning on the day of DepoCyt injection.

If drug related neurotoxicity develops, the dose should be reduced to 25 mg. If it persists, treatment with DepoCyt should be discontinued.

DepoCyt® (cytarabine liposome injection) is contraindicated in patients who are hypersensitive to cytarabine or any component of the formulation, and in patients with active meningeal infection.

Toxic effects may be related to a single dose or to cumulative administration. Because toxic effects can occur at any time during therapy (although they are most likely to occur within 5 days of drug administration), patients receiving intrathecal therapy with DepoCyt should be monitored continuously for the development of neurotoxicity. If patients develop neurotoxicity, reduce subsequent doses of DepoCyt. If neurotoxicity persists, discontinue DepoCyt [see Warnings and Precautions (5.3)]

Hydrocephalus has also been reported, possibly precipitated by arachnoiditis.

Blockage to CSF flow may result in increased free cytarabine concentrations in the CSF and an increased risk of neurotoxicity. Therefore, as with any intrathecal cytotoxic therapy, consideration should be given to the need for assessment of CSF flow before treatment is started.

Following intrathecal administration of DepoCyt, central nervous system toxicity, including persistent extreme somnolence, hemiplegia, visual disturbances including blindness which may be total and permanent, deafness and cranial nerve palsies have been reported. Symptoms and signs of peripheral neuropathy, such as pain, numbness, paresthesia, weakness, and impaired bowel and bladder control have also been observed. In some cases, a combination of neurological signs and symptoms has been reported as Cauda Equina Syndrome.

If patients develop neurotoxicity, reduce subsequent doses of DepoCyt or discontinue DepoCyt Headache, nausea, and fever are expected in early signs of neurotoxicity.

Cytarabine, the active component of DepoCyt, can cause fetal harm if a pregnant woman is exposed to the drug systemically. The systemic exposure of cytarabine following intrathecal administration of DepoCyt is negligible. Cytarabine was teratogenic in mice and rats. Cytarabine was embryotoxic in mice when administered during the period of organogenesis. If this drug is used during pregnancy or if the patient becomes pregnant while taking this drug, the patient should be apprised of the potential harm to a fetus. [See Use in Specific Populations, Sec. 8.1]

The following serious adverse reactions are described in greater detail in other sections of the label:

Because clinical trials are conducted under widely varying conditions, adverse reaction rates observed in the clinical trials of a drug cannot be directly compared to rates in the clinical trials of another drug and may not reflect the rates observed in practice. The toxicity database consists of the observations made during Phase 1-4 studies. The most common adverse reactions in all patients and in patients with lymphoma are shown in Table 1. The incidences of symptoms possibly reflecting meningeal irritation are shown in Table 2.

During the clinical studies, 2 deaths related to DepoCyt were reported. One patient at the 125 mg dose level died of encephalopathy 36 hours after receiving an intraventricular dose of DepoCyt. This patient, however, was also receiving concomitant whole brain irradiation and had previously received intraventricular methotrexate. The other patient received DepoCyt, 50 mg by the intraventricular route and developed focal seizures progressing to status epilepticus. This patient died approximately 8 weeks after the last dose of study medication. In the controlled lymphoma study, the patient incidence of seizures was higher in the DepoCyt group (4/17, 23.5%) than in the cytarabine group (1/16, 6.3%). The death of 1 additional patient was considered “possibly” related to DepoCyt. He was a 63-year-old with extensive lymphoma involving the nasopharynx, brain, and meninges with multiple neurologic deficits who died of apparent disease progression 4 days after his second dose of DepoCyt.

There are no studies assessing the reproductive toxicity of DepoCyt. The systemic exposure of cytarabine following intrathecal administration of DepoCyt is negligible. Cytarabine can cause fetal harm if a pregnant woman is exposed to the drug systemically. Three anecdotal cases of major limb malformations have been reported in infants after their mothers received intravenous cytarabine, alone or in combination with other agents, during the first trimester. Advise women of childbearing potential to avoid becoming pregnant while receiving DepoCyt. If this drug is used during pregnancy or if the patient becomes pregnant while taking this drug, the patient should be apprised of the potential harm to a fetus.

It is not known whether cytarabine is excreted in human milk following intrathecal DepoCyt administration. The systemic exposure to free cytarabine following intrathecal treatment with DepoCyt was negligible. Because many drugs are excreted in human milk and because of the potential for serious adverse reactions in nursing infants, a decision should be made whether to discontinue nursing or to discontinue the drug, taking into account the importance of the drug to the mother.

The safety and efficacy of DepoCyt in pediatric patients has not been established.

The effects of hepatic or renal impairment on the pharmacokinetics of DepoCyt have not been studied.

No overdosages with DepoCyt® (cytarabine liposome injection) have been reported. An overdose with DepoCyt may be associated with severe chemical arachnoiditis including encephalopathy. In an early uncontrolled study without dexamethasone prophylaxis, single doses up to 125 mg were administered. There is no antidote for overdose of intrathecal DepoCyt or unencapsulated cytarabine released from DepoCyt. Exchange of CSF with isotonic saline has been carried out in a case of intrathecal overdose of free cytarabine, and such a procedure may be considered in the case of DepoCyt overdose. Management of overdose should be directed at maintaining vital functions.

DepoCyt® (cytarabine liposome injection) is a sterile, injectable suspension of the antimetabolite cytarabine, for intrathecal administration. The chemical name of cytarabine is 4-amino-1 -β-D-arabinofuranosyl-2(1H)-pyrimidinone, and is also known as cytosine arabinoside . It has a molecular formula of C9H13N3O5, and a molecular weight 243.22 g/mol. Cytarabine has the following structural formula: 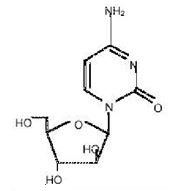 DepoCyt is available as a single-dose vial containing 50 mg/5 mL (10 mg/mL) of cytarabine. DepoCyt is formulated as a sterile, non-pyrogenic, white to off-white suspension of cytarabine liposomes in 0.9% w/v sodium chloride in water for injection. Each mL contains 10 mg cytarabine, 4.4 mg cholesterol, 1.2 mg triolein, 5.7 mg dioleoylphosphatidylcholine (DOPC), and 1.0 mg dipalmitoylphosphatidylglycerol (DPPG). DepoCyt is preservative-free. The pH of the product falls within the range from 5.5 to 8.5.

DepoCyt® (cytarabine liposome injection) is a sustained-release formulation of the active ingredient cytarabine designed for direct administration into the cerebrospinal fluid (CSF). Cytarabine is a cell cycle phase-specific antineoplastic agent, affecting cells only during the S-phase of cell division. Intracellularly, cytarabine is converted into cytarabine-5-triphosphate (ara-CTP), which is the active metabolite. The mechanism of action is not completely understood, but it appears that ara-CTP acts primarily through inhibition of DNA polymerase. Incorporation into DNA and RNA may also contribute to cytarabine cytotoxicity. Cytarabine is cytotoxic to proliferating mammalian cells in culture.

The primary route of elimination of cytarabine is metabolism to the inactive compound ara-U, followed by urinary excretion of ara-U. In contrast to systemically administered cytarabine, which is rapidly metabolized to ara-U, conversion to ara-U in the CSF is negligible after intrathecal administration because of the significantly lower cytidine deaminase activity in the CNS tissues and CSF. The CSF clearance rate of cytarabine is similar to the CSF bulk flow rate of 0.24 mL/min.

No carcinogenicity, mutagenicity or impairment of fertility studies have been conducted with DepoCyt.

No studies assessing the impact of cytarabine on fertility are available in the literature. Cytarabine was clastogenic to meiotic cells; a dose-dependent increase in sperm-head abnormalities and chromosomal aberrations occurred in mice given IP cytarabine. Because the systemic exposure to free cytarabine following intrathecal treatment with DepoCyt was negligible, the risk of impaired fertility after intrathecal DepoCyt is likely to be low.

The first study, which was a randomized, multi-center, multi-arm study involving a total of 99 treated patients, compared 50 mg of DepoCyt administered every 2 weeks to standard intrathecal chemotherapy administered twice a week to patients with solid tumors, lymphoma, or leukemia. For patients with lymphoma, standard therapy consisted of 50 mg of unencapsulated cytarabine given twice a week. Thirty-three lymphoma patients (17 DepoCyt, 16 cytarabine) were treated. Patients went off study if they had not achieved a complete response defined as clearing of the CSF from all previously positive sites in the absence of progression of neurological symptoms, after 4 weeks of treatment with study drug.

In the first study, complete response was prospectively defined as (1) conversion, confirmed by a blinded central pathologist, from a positive examination of the CSF for malignant cells to a negative examination on two separate occasions (at least 3 days apart, on day 29 and later) at all initially positive sites, together with (2) an absence of neurological progression during the treatment period.

The complete response rates in the first study of lymphoma are shown in Table 3. Although there was a plan for central pathology review of the data, in 4 of the 7 responding patients on the DepoCyt arm this was not accomplished and these cases were considered to have had a complete response based on the reading of an unblinded pathologist. The median overall survival of all treated patients was 99.5 days in the DepoCyt group and 63 days in the cytarabine group. In both groups the majority of patients died from progressive systemic disease, not neoplastic meningitis.

The second study was a randomized, multi-center, multi-arm study involving a total of 124 treated patients with either solid tumors or lymphomas. In this study, 24 patients with lymphoma were randomized and treated with DepoCyt or cytarabine. Patients received 6 two-week induction cycles of DepoCyt 50 mg every 2 weeks or cytarabine 50 mg twice weekly. Patients then received four maintenance cycles of DepoCyt 50 mg every 4 weeks, or cytarabine 50 mg weekly for 4 weeks. In both studies, patients received concurrent treatment with dexamethasone to minimize symptoms associated with chemical arachnoiditis [see Warnings and Precautions (5) and Dosage and Administration (2)]. In this study, cytological response was assessed in a blinded fashion utilizing a similar definition as in the first study. The results in patients with lymphomatous meningitis are shown in Table 3.

Store refrigerated at 2° to 8°C (36° to 46°F). Protect from freezing and avoid aggressive agitation.

Do not use beyond expiration date printed on the label. 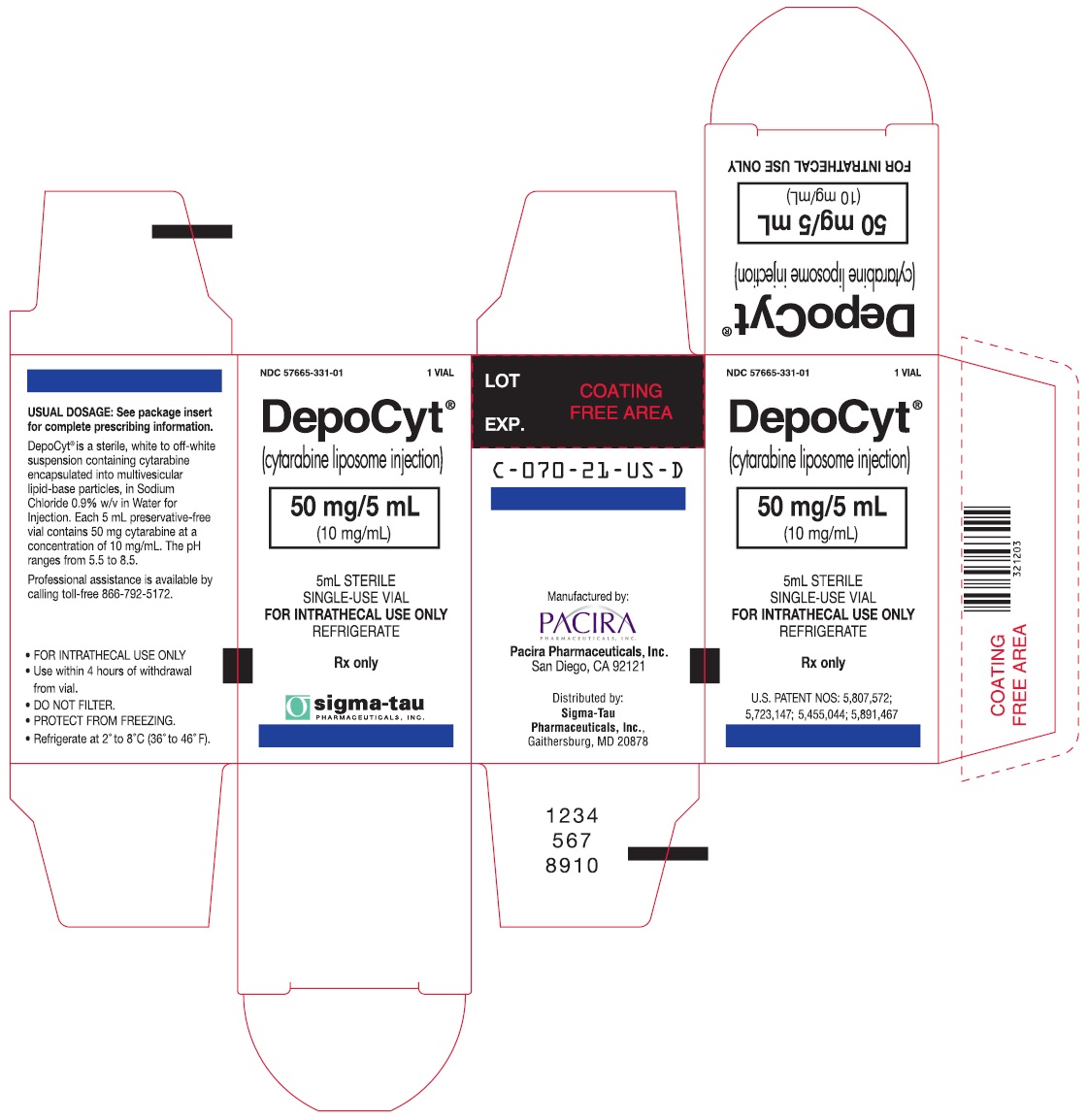