For Dermatologic Use Only
Rx only

Chemically, penciclovir is known as 9-[4-hydroxy-3-(hydroxymethyl)butyl]guanine. Its molecular formula is C10H15N5O3; its molecular weight is 253.26. It is a synthetic acyclic guanine derivative and has the following structure: 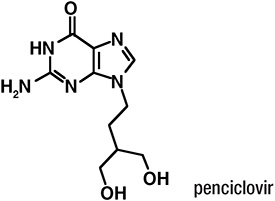 
Antiviral Activity In Vitro and In Vivo: In cell culture studies, penciclovir has antiviral activity against HSV-1 and HSV-2. Sensitivity test results, expressed as the concentration of the drug required to inhibit growth of the virus by 50% (IC50) or 99% (IC99) in cell culture, vary depending upon a number of factors, including the assay protocols. See Table 1.

Measurable penciclovir concentrations were not detected in plasma or urine of healthy male volunteers (n=12) following single or repeat application of the 1% cream at a dose of 180 mg penciclovir daily (approximately 67 times the estimated usual clinical dose).

Pediatric Patients: The systemic absorption of penciclovir following topical administration has not been evaluated in patients <18 years of age.

Denavir was studied in two double-blind, placebo (vehicle)-controlled trials for the treatment of recurrent herpes labialis in which otherwise healthy adults were randomized to either Denavir or placebo. Therapy was to be initiated by the subjects within 1 hour of noticing signs or symptoms and continued for 4 days, with application of study medication every 2 hours while awake. In both studies, the mean duration of lesions was approximately one-half-day shorter in the subjects treated with Denavir (N=1,516) as compared to subjects treated with placebo (N=1,541) (approximately 4.5 days versus 5 days, respectively). The mean duration of lesion pain was also approximately one half-day shorter in the Denavir group compared to the placebo group.

Denavir (penciclovir cream) is indicated for the treatment of recurrent herpes labialis (cold sores) in adults and children 12 years of age and older.

Denavir is contraindicated in patients with known hypersensitivity to the product or any of its components.

Denavir should only be used on herpes labialis on the lips and face. Because no data are available, application to human mucous membranes is not recommended. Particular care should be taken to avoid application in or near the eyes since it may cause irritation. Lesions that do not improve or that worsen on therapy should be evaluated for secondary bacterial infection. The effect of Denavir has not been established in immunocompromised patients.

Denavir is a prescription topical cream for the treatment of cold sores (recurrent herpes labialis) that occur on the face and lips. It is not a cure for cold sores and not all patients respond to it. Do not use if you are allergic to Denavir (penciclovir) or any of the ingredients in Denavir cream. Before you use Denavir, tell your doctor if you are pregnant, planning to become pregnant, or are breast-feeding.

Directions: Wash your hands. Your face should be clean and dry. Apply a layer of Denavir cream to cover only the cold sore area or the area of tingling (or other symptoms) before the cold sore appears. Rub in the cream until it disappears. Apply the cream every 2 hours during waking hours for 4 days. Even though Denavir works at the blister stage, treatment should be started at the earliest sign of a cold sore (i.e., tingling, redness, itching, or bump). Wash your hands with soap and water after using Denavir cream. Store Denavir cream at room temperature (59°-86°F). Keep out of reach of children.

Possible side effects:Denavir cream was well tolerated in clinical studies in patients with cold sores. The most frequently reported side effect was headache. Common skin-related side effects of Denavir cream are application site reactions, local anesthesia, taste perversion, and rash.

In clinical trials, systemic drug exposure following the topical administration of penciclovir cream was negligible, as the penciclovir content of all plasma and urine samples was below the limit of assay detection (0.1 mcg/mL and 10 mcg/mL, respectively). However, for the purpose of inter-species dose comparisons presented in the following sections, an assumption of 100% absorption of penciclovir from the topically applied product has been used. Based on use of the maximal recommended topical dose of penciclovir of 0.05 mg/kg/day and an assumption of 100% absorption, the maximum theoretical plasma AUC0-24 hrs for penciclovir is approximately 0.129 mcg.hr/mL.


Mutagenesis: When tested in vitro, penciclovir did not cause an increase in gene mutation in the Ames assay using multiple strains of S. typhimurium or E. coli (at up to 20,000 mcg/plate), nor did it cause an increase in unscheduled DNA repair in mammalian HeLa S3 cells (at up to 5,000 mcg/mL). However, an increase in clastogenic responses was seen with penciclovir in the L5178Y mouse lymphoma cell assay (at doses ≥1000 mcg/mL) and, in human lymphocytes incubated in vitro at doses ≥250 mcg/mL. When tested in vivo, penciclovir caused an increase in micronuclei in mouse bone marrow following the intravenous administration of doses ≥500 mg/kg (≥810× the maximum human dose, based on body surface area conversion).


Impairment of Fertility: Testicular toxicity was observed in multiple animal species (rats and dogs) following repeated intravenous administration of penciclovir (160 mg/kg/day and 100 mg/kg/day, respectively, approximately 1155 and 3255× the maximum theoretical human AUC). Testicular changes seen in both species included atrophy of the seminiferous tubules and reductions in epididymal sperm counts and/or an increased incidence of sperm with abnormal morphology or reduced motility. Adverse testicular effects were related to an increasing dose or duration of exposure to penciclovir. No adverse testicular or reproductive effects (fertility and reproductive function) were observed in rats after 10 to 13 weeks dosing at 80 mg/kg/day, or testicular effects in dogs after 13 weeks dosing at 30 mg/kg/day (575 and 845× the maximum theoretical human AUC, respectively). Intravenously administered penciclovir had no effect on fertility or reproductive performance in female rats at doses of up to 80 mg/kg/day (260× the maximum human dose [BSA]).

There was no evidence of any clinically significant effects on sperm count, motility or morphology in 2 placebo-controlled clinical trials of Famvir® (famciclovir [the oral prodrug of penciclovir], 250 mg b.i.d.; n=66) in immunocompetent men with recurrent genital herpes, when dosing and follow-up were maintained for 18 and 8 weeks, respectively (approximately 2 and 1 spermatogenic cycles in the human).

Teratogenic Effects-Pregnancy Category B. No adverse effects on the course and outcome of pregnancy or on fetal development were noted in rats and rabbits following the intravenous administration of penciclovir at doses of 80 and 60 mg/kg/day, respectively (estimated human equivalent doses of 13 and 18 mg/kg/day for the rat and rabbit, respectively, based on body surface area conversion; the body surface area doses being 260 and 355× the maximum recommended dose following topical application of the penciclovir cream). There are, however, no adequate and well-controlled studies in pregnant women. Because animal reproduction studies are not always predictive of human response, penciclovir should be used during pregnancy only if clearly needed.

There is no information on whether penciclovir is excreted in human milk after topical administration. However, following oral administration of famciclovir (the oral prodrug of penciclovir) to lactating rats, penciclovir was excreted in breast milk at concentrations higher than those seen in the plasma. Therefore, a decision should be made whether to discontinue the drug, taking into account the importance of the drug to the mother.

There are no data on the safety of penciclovir in newborns.

An open-label, uncontrolled trial with penciclovir cream 1% was conducted in 102 patients, ages 12-17 years, with recurrent herpes labialis. The frequency of adverse events was generally similar to the frequency previously reported for adult patients. Safety and effectiveness in pediatric patients less than 12 years of age have not been established.

In 74 patients ≥65 years of age, the adverse events profile was comparable to that observed in younger patients.

Two studies, enrolling 108 healthy subjects, were conducted to evaluate the dermal tolerance of 5% penciclovir cream (a 5-fold higher concentration than the commercial formulation) compared to vehicle using repeated occluded patch testing methodology. The 5% penciclovir cream induced mild erythema in approximately one-half of the subjects exposed, an irritancy profile similar to the vehicle control in terms of severity and proportion of subjects with a response. No evidence of sensitization was observed.

The following events have been identified from worldwide post-marketing use of Denavir in treatment of recurrent herpes labialis (cold sores) in adults. These events have been chosen for inclusion due to a combination of their seriousness, frequency of reporting, or potential causal connection to Denavir cream.

Since penciclovir is poorly absorbed following oral administration, adverse reactions related to penciclovir ingestion are unlikely. There is no information on overdose.

Denavir should be applied every 2 hours during waking hours for a period of 4 days. Treatment should be started as early as possible (i.e., during the prodrome or when lesions appear).

Denavir is supplied in a 1.5 gram and 5 gram tube containing 10 mg of penciclovir per gram. 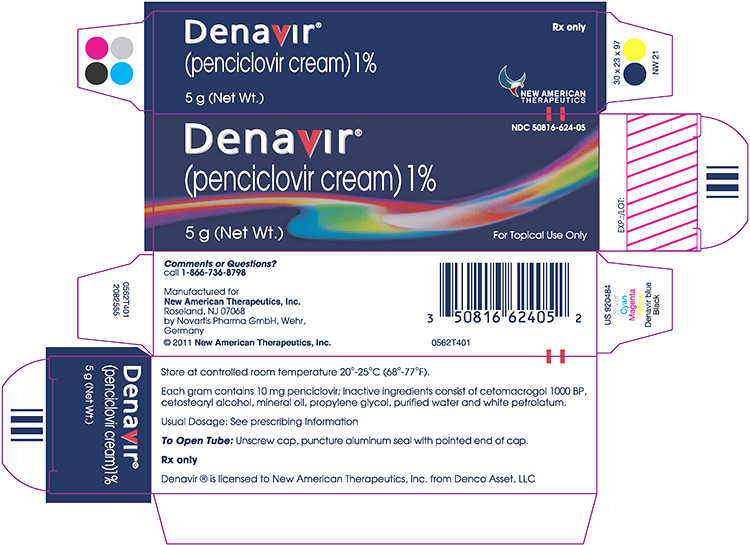