Etodolac is a member of the pyranocarboxylic acid group of non-steroidal anti-inflammatory drugs (NSAIDs). Each capsule contains etodolac for oral administration. Etodolac is a racemic mixture of [+]S and [-]R-enantiomers. Etodolac is a white crystalline compound, insoluble in water but soluble in alcohols, chloroform, dimethyl sulfoxide, and aqueous polyethylene glycol.

PharmacodynamicsEtodolac is a non-steroidal anti-inflammatory drug (NSAID) that exhibits anti-inflammatory, analgesic, and antipyretic activities in animal models. The mechanism of action of etodolac, like that of other NSAIDs, is not completely understood, but may be related to prostaglandin synthetase inhibition.Etodolac is a racemic mixture of [-]R- and [+]S-etodolac. As with other NSAIDs, it has been demonstrated in animals that the [+]S-form is biologically active. Both enantiomers are stable and there is no [-]R to [+]S conversion in vivo.PharmacokineticsAbsorptionThe systemic bioavailability of etodolac from etodolac capsules is 100% as compared to solution and at least 80% as determined from mass balance studies. Etodolac is well absorbed and had a relative bioavailability of 100% when 200 mg capsules were compared with a solution of etodolac. Based on mass balance studies, the systemic availability of etodolac from either the tablet or capsule formulation is at least 80%. Etodolac does not undergo significant first-pass metabolism following oral administration. Mean (± 1 SD) peak plasma concentrations (Cmax) range from approximately 14 ± 4 to 37 ± 9 mcg/mL after 200 to 600 mg single doses and are reached in 80 ± 30 minutes (see Table 1 for summary of pharmacokinetic parameters). The dose-proportionality based on the area under the plasma concentration-time curve (AUC) is linear following doses up to 600 mg every 12 hours. Peak concentrations are dose proportional for both total and free etodolac following doses up to 400 mg every 12 hours, but following a 600 mg dose, the peak is about 20% higher than predicted on the basis of lower doses. The extent of absorption of etodolac is not affected when etodolac is administered after a meal. Food intake, however, reduces the peak concentration reached by approximately one-half and increases the time to peak concentration by 1.4 to 3.8 hours.Table 1: Mean (CV%) Pharmacokinetic Parameters of Etodolac in Normal Healthy Adults and Various Special PopulationsPK ParametersNormal Healthy Adults (18 to 65)*3 (n = 179)Healthy Males (18 to 65)   (n = 176)Healthy Females (27 to 65)   (n = 3)Elderly (> 65) (70 to 84)Hemodialysis (24 to 65) (n = 9)Renal Impairment (46 to 73)   (n = 10)Hepatic Impairment (34 to 60)   (n = 9)Dialysis OnDialysis OffTmax, h1.4 (61%)†21.4 (60%)1.7 (60%)1.2 (43%)1.7 (88%)0.9 (67%)2.1 (46%)1.1 (15%)Oral Clearance, mL/h/kg (CL/F)49.1 (33%)49.4 (33%)35.7 (28%)45.7 (27%)NA4NA458.3 (19%)42.0 (43%)Apparent Volume of Distribution mL/kg (Vd/F)393 (29%)394 (29%)300 (8%)414 (38%)NA4NA4NA4NA4Terminal Half-Life, h6.4 (22%)6.4 (22%)7.9 (35%)6.5 (24%)5.1 (22%)7.5 (34%)NA45.7 (24%)DistributionThe mean apparent volume of distribution (Vd/F) of etodolac is approximately 390 mL/kg. Etodolac is more than 99% bound to plasma proteins, primarily to albumin. The free fraction is less than 1% and is independent of etodolac total concentration over the dose range studied. It is not known whether etodolac is excreted in human milk; however, based on its physical-chemical properties, excretion into breast milk is expected. Data from in vitro studies, using peak serum concentrations at reported therapeutic doses in humans, show that the etodolac free fraction is not significantly altered by acetaminophen, ibuprofen, indomethacin, naproxen, piroxicam, chlorpropamide, glipizide, glyburide, phenytoin, and probenecid.MetabolismEtodolac is extensively metabolized in the liver. The role, if any, of a specific cytochrome P450 system in the metabolism of etodolac is unknown. Several etodolac metabolites have been identified in human plasma and urine. Other metabolites remain to be identified. The metabolites include 6-, 7-, and 8-hydroxylated-etodolac and etodolac glucuronide. After a single dose of 14C-etodolac, hydroxylated metabolites accounted for less than 10% of total drug in serum. On chronic dosing, hydroxylated-etodolac metabolite does not accumulate in the plasma of patients with normal renal function. The extent of accumulation of hydroxylated-etodolac metabolites in patients with renal dysfunction has not been studied. The hydroxylated-etodolac metabolites undergo further glucuronidation followed by renal excretion and partial elimination in the feces.ExcretionThe mean oral clearance of etodolac following oral dosing is 49 (± 16) mL/h/kg. Approximately 1% of an etodolac dose is excreted unchanged in the urine with 72% of the dose excreted into urine as parent drug plus metabolite:- etodolac, unchanged1%- etodolac glucuronide13%- hydroxylated metabolites (6-, 7-, and 8-OH)5%- hydroxylated metabolite glucuronides20%- unidentified metabolites33%Although renal elimination is a significant pathway of excretion for etodolac metabolites, no dosing adjustment in patients with mild to moderate renal dysfunction is generally necessary. The terminal half-life (t½) of etodolac is 6.4 hours (22% CV). In patients with severe renal dysfunction or undergoing hemodialysis, dosing adjustment is not generally necessary.Fecal excretion accounted for 16% of the dose.Special PopulationsGeriatricIn etodolac clinical studies, no overall differences in safety or effectiveness were observed between these patients and younger patients. In pharmacokinetic studies, age was shown not to have any effect on etodolac half-life or protein binding, and there was no change in expected drug accumulation. Therefore, no dosage adjustment is generally necessary in the elderly on the basis of pharmacokinetics (see PRECAUTIONS, Geriatric Use).Etodolac is eliminated primarily by the kidney. Because elderly patients are more likely to have decreased renal function, care should be taken in dose selection, and it may be useful to monitor renal function (see WARNINGS, Renal Effects).PediatricSafety and effectiveness in pediatric patients below the age of 18 years have not been established.RacePharmacokinetic differences due to race have not been identified. Clinical studies included patients of many races, all of whom responded in a similar fashion.Hepatic InsufficiencyEtodolac is predominantly metabolized by the liver. In patients with compensated hepatic cirrhosis, the disposition of total and free etodolac is not altered. Patients with acute and chronic hepatic diseases do not generally require reduced doses of etodolac compared to patients with normal hepatic function. However, etodolac clearance is dependent on liver function and could be reduced in patients with severe hepatic failure. Etodolac plasma protein binding did not change in patients with compensated hepatic cirrhosis given etodolac.Renal InsufficiencyEtodolac pharmacokinetics have been investigated in subjects with renal insufficiency. Etodolac renal clearance was unchanged in the presence of mild-to-moderate renal failure (creatinine clearance 37 to 88 mL/min). Furthermore, there were no significant differences in the disposition of total and free etodolac in these patients. However, etodolac should be used with caution in such patients because, as with other NSAIDs, it may further decrease renal function in some patients. In patients undergoing hemodialysis, there was a 50% greater apparent clearance of total etodolac, due to a 50% greater unbound fraction. Free etodolac clearance was not altered, indicating the importance of protein binding in etodolac’s disposition. Etodolac is not significantly removed from the blood in patients undergoing hemodialysis.

AnalgesiaControlled clinical trials in analgesia were single-dose, randomized, double-blind, parallel studies in three pain models, including dental extractions. The analgesic effective dose for etodolac established in these acute pain models was 200 to 400 mg. The onset of analgesia occurred approximately 30 minutes after oral administration. Etodolac 200 mg provided efficacy comparable to that obtained with aspirin (650 mg). Etodolac 400 mg provided efficacy comparable to that obtained with acetaminophen with codeine (600 mg + 60 mg). The peak analgesic effect was between 1 to 2 hours. Duration of relief averaged 4 to 5 hours for 200 mg of etodolac and 5 to 6 hours for 400 mg of etodolac as measured by when approximately half of the patients required remedication.OsteoarthritisThe use of etodolac in managing the signs and symptoms of osteoarthritis of the hip or knee was assessed in double-blind, randomized, controlled clinical trials in 341 patients. In patients with osteoarthritis of the knee, etodolac, in doses of 600 to 1000 mg/day, was better than placebo in two studies. The clinical trials in osteoarthritis used b.i.d. dosage regimens.Rheumatoid ArthritisIn a 3 month study with 426 patients, etodolac 300 mg b.i.d. was effective in management of rheumatoid arthritis and comparable in efficacy to piroxicam 20 mg/day. In a long-term study with 1,446 patients in which 60% of patients completed 6 months of therapy and 20% completed 3 years of therapy, etodolac in a dose of 500 mg b.i.d. provided efficacy comparable to that obtained with ibuprofen 600 mg q.i.d. In clinical trials of rheumatoid arthritis patients, etodolac has been used in combination with gold, d-penicillamine, chloroquine, corticosteroids, and methotrexate

Carefully consider the potential benefits and risks of etodolac capsules and other treatment options before deciding to use etodolac capsules. Use the lowest effective dose for the shortest duration consistent with individual patient treatment goals (see WARNINGS).

Etodolac capsules are contraindicated in patients with known hypersensitivity to etodolac.

Etodolac capsules should not be given to patients who have experienced asthma, urticaria, or other allergic-type reactions after taking aspirin or other NSAIDs. Severe, rarely fatal, anaphylactic-like reactions to NSAIDs have been reported in such patients (see WARNINGS, Anaphylactoid Reactions and PRECAUTIONS, Preexisting Asthma).

Etodolac capsules are contraindicated for the treatment of peri-operative pain in the setting of coronary artery bypass graft (CABG) surgery (see WARNINGS).

Symptoms following acute NSAID overdose are usually limited to lethargy, drowsiness, nausea, vomiting, and epigastric pain, which are generally reversible with supportive care. Gastrointestinal bleeding can occur and coma has occurred following massive ibuprofen or mefenamic-acid overdose. Hypertension, acute renal failure, and respiratory depression may occur but are rare. Anaphylactoid reactions have been reported with therapeutic ingestion of NSAIDs, and may occur following overdose.

Patients should be managed by symptomatic and supportive care following an NSAID overdose. There are no specific antidotes. Emesis and/or activated charcoal (60 to 100 in adults, 1 to 2 g/kg in children) and/or osmotic cathartic may be indicated in patients seen within 4 hours of ingestion with symptoms or following a large overdose (5 to 10 times the usual dose). Forced diuresis, alkalinization of the urine, hemodialysis, or hemoperfusion would probably not be useful due to etodolac’s high protein binding.

Carefully consider the potential benefits and risks of etodolac capsules and other treatment options before deciding to use etodolac capsules. Use the lowest effective dose for the shortest duration consistent with individual patient treatment goals (see WARNINGS).After observing the response to initial therapy with etodolac capsules, the dose and frequency should be adjusted to suit an individual patient's needs.Dosage adjustment of etodolac capsules is generally not required in patients with mild to moderate renal impairment. Etodolac capsules should be used with caution in such patients, because, as with other NSAIDs, they may further decrease renal function in some patients with impaired renal function (see WARNINGS, Renal Effects).AnalgesiaThe recommended total daily dose of etodolac capsules for acute pain is up to 1000 mg, given as 200 to 400 mg every 6 to 8 hours. Doses of etodolac greater than 1000 mg/day have not been adequately evaluated in well-controlled clinical trials.Osteoarthritis and Rheumatoid ArthritisThe recommended starting dose of etodolac capsules for the management of the signs and symptoms of osteoarthritis or rheumatoid arthritis is: 300 mg b.i.d., t.i.d., or 400 mg b.i.d., or 500 mg b.i.d. A lower dose of 600 mg/day may suffice for long-term administration. Physicians should be aware that doses above 1000 mg/day have not been adequately evaluated in well-controlled clinical trials.In chronic conditions, a therapeutic response to therapy with etodolac capsules is sometimes seen within one week of therapy, but most often is observed by two weeks. After a satisfactory response has been achieved, the patient’s dose should be reviewed and adjusted as required. 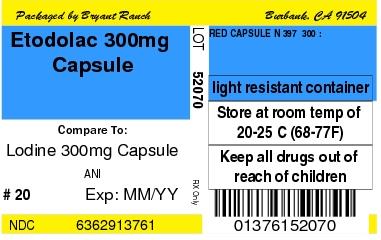