Lidocaine patch 5% is comprised of an adhesive material containing 5% lidocaine, which is applied to a white non-woven polyethylene terephthalate (PET) material backing and covered with a transparent PET release liner. The release liner is removed prior to application to the skin. The size of the patch is 10 cm x 14 cm.

Lidocaine is chemically designated as acetamide, 2-(diethylamino)-N-(2,6-dimethylphenyl), has an octanol:water partition ratio of 43 at pH 7.4, and has the following structure:

Lidocaine is an amide-type local anesthetic agent and is suggested to stabilize neuronal membranes by inhibiting the ionic fluxes required for the initiation and conduction of impulses.

The amount of lidocaine systemically absorbed from lidocaine patch is directly related to both the duration of application and the surface area over which it is applied. In a pharmacokinetic study, three lidocaine patches were applied over an area of 420 cm 2 of intact skin on the back of normal volunteers for 12 hours. Blood samples were withdrawn for determination of lidocaine concentration during the application and for 12 hours after removal of patches. The results are summarized in Table 1.

When lidocaine patch is used according to the recommended dosing instructions, only 3 ± 2% of the dose applied is expected to be absorbed. At least 95% (665 mg) of lidocaine will remain in a used patch. Mean peak blood concentration of lidocaine is about 0.13 mcg/mL (about 1/10 of the therapeutic concentration required to treat cardiac arrhythmias). Repeated application of three patches simultaneously for 12 hours (recommended maximum daily dose), once per day for three days, indicated that the lidocaine concentration does not increase with daily use. The mean plasma pharmacokinetic profile for the 15 healthy volunteers is shown in Figure 1. 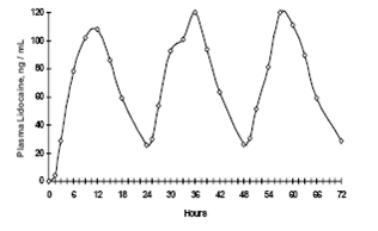 It is not known if lidocaine is metabolized in the skin. Lidocaine is metabolized rapidly by the liver to a number of metabolites, including monoethylglycinexylidide (MEGX) and glycinexylidide (GX), both of which have pharmacologic activity similar to, but less potent than that of lidocaine. A minor metabolite, 2, 6-xylidine, has unknown pharmacologic activity but is carcinogenic in rats. The blood concentration of this metabolite is negligible following application of lidocaine patch 5%. Following intravenous administration, MEGX and GX concentrations in serum range from 11 to 36% and from 5 to 11% of lidocaine concentrations, respectively.

Single-dose treatment with lidocaine patch was compared to treatment with vehicle patch (without lidocaine), and to no treatment (observation only) in a double-blind, crossover clinical trial with 35 post-herpetic neuralgia patients. Pain intensity and pain relief scores were evaluated periodically for 12 hours. Lidocaine patch performed statistically better than vehicle patch in terms of pain intensity from 4 to 12 hours.

Multiple-dose, two-week treatment with lidocaine patch was compared to vehicle patch (without lidocaine) in a double-blind, crossover clinical trial of withdrawal-type design conducted in 32 patients, who were considered as responders to the open-label use of lidocaine patch prior to the study. The constant type of pain was evaluated but not the pain induced by sensory stimuli (dysesthesia). Statistically significant differences favoring lidocaine patch were observed in terms of time to exit from the trial (14 versus 3.8 days at p-value <0.001), daily average pain relief, and patient’s preference of treatment. About half of the patients also took oral medication commonly used in the treatment of post-herpetic neuralgia. The extent of use of concomitant medication was similar in the two treatment groups.

Lidocaine patch 5% is indicated for relief of pain associated with post-herpetic neuralgia. It should be applied only to intact skin.

Lidocaine patch 5% is contraindicated in patients with a known history of sensitivity to local anesthetics of the amide type, or to any other component of the product.

Even a used lidocaine patch contains a large amount of lidocaine (at least 665 mg). The potential exists for a small child or a pet to suffer serious adverse effects from chewing or ingesting a new or used lidocaine patch, although the risk with this formulation has not been evaluated. It is important for patients to store and dispose of lidocaine patch 5% out of the reach of children, pets and others. (See HANDLING AND DISPOSAL)

Hepatic Disease: Patients with severe hepatic disease are at greater risk of developing toxic blood concentrations of lidocaine, because of their inability to metabolize lidocaine normally.

Allergic Reactions: Patients allergic to para-aminobenzoic acid derivatives (procaine, tetracaine, benzocaine, etc.) have not shown cross sensitivity to lidocaine. However, lidocaine patch 5% should be used with caution in patients with a history of drug sensitivities, especially if the etiologic agent is uncertain.

Non-intact Skin: Application to broken or inflamed skin, although not tested, may result in higher blood concentrations of lidocaine from increased absorption. Lidocaine patch 5% is only recommended for use on intact skin.

External Heat Sources: Placement of external heat sources, such as heating pads or electric blankets, over lidocaine patch 5% is not recommended as this has not been evaluated and may increase plasma lidocaine levels.

Eye Exposure: The contact of lidocaine patch 5% with eyes, although not studied, should be avoided based on the findings of severe eye irritation with the use of similar products in animals. If eye contact occurs, immediately wash out the eye with water or saline and protect the eye until sensation returns.

Antiarrhythmic Drugs: Lidocaine patch 5% should be used with caution in patients receiving Class I antiarrhythmic drugs (such as tocainide and mexiletine) since the toxic effects are additive and potentially synergistic.

Local Anesthetics: When lidocaine patch 5% is used concomitantly with other products containing local anesthetic agents, the amount absorbed from all formulations must be considered.

Carcinogenesis: A minor metabolite, 2,6-xylidine, has been found to be carcinogenic in rats. The blood concentration of this metabolite is negligible following application of lidocaine patch 5%.

Mutagenesis: Lidocaine HCl is not mutagenic in Salmonella/mammalian microsome test nor clastogenic in chromosome aberration assay with human lymphocytes and mouse micronucleus test.

Impairment of Fertility: The effect of lidocaine patch 5% on fertility has not been studied.

Teratogenic Effects: Pregnancy Category B. Lidocaine patch 5% has not been studied in pregnancy. Reproduction studies with lidocaine have been performed in rats at doses up to 30 mg/kg subcutaneously and have revealed no evidence of harm to the fetus due to lidocaine. There are, however, no adequate and well-controlled studies in pregnant women. Because animal reproduction studies are not always predictive of human response, lidocaine patch 5% should be used during pregnancy only if clearly needed.

During or immediately after treatment with lidocaine patch 5%, the skin at the site of application may develop blisters, bruising, burning sensation, depigmentation, dermatitis, discoloration, edema, erythema, exfoliation, irritation, papules, petechia, pruritus, vesicles, or may be the locus of abnormal sensation. These reactions are generally mild and transient, resolving spontaneously within a few minutes to hours.

Allergic and anaphylactoid reactions associated with lidocaine, although rare, can occur. They are characterized by angioedema, bronchospasm, dermatitis, dyspnea, hypersensitivity, laryngospasm, pruritus, shock, and urticaria. If they occur, they should be managed by conventional means. The detection of sensitivity by skin testing is of doubtful value.

Due to the nature and limitation of spontaneous reports in postmarketing surveillance, causality has not been established for additional reported adverse events including:

Systemic adverse reactions following appropriate use of lidocaine patch 5% are unlikely, due to the small dose absorbed (see CLINICAL PHARMACOLOGY, Pharmacokinetics). Systemic adverse effects of lidocaine are similar in nature to those observed with other amide local anesthetic agents, including CNS excitation and/or depression (light-headedness, nervousness, apprehension, euphoria, confusion, dizziness, drowsiness, tinnitus, blurred or double vision, vomiting, sensations of heat, cold or numbness, twitching, tremors, convulsions, unconsciousness, respiratory depression and arrest). Excitatory CNS reactions may be brief or not occur at all, in which case the first manifestation may be drowsiness merging into unconsciousness. Cardiovascular manifestations may include bradycardia, hypotension and cardiovascular collapse leading to arrest.

Lidocaine overdose from cutaneous absorption is rare, but could occur. If there is any suspicion of lidocaine overdose (see ADVERSE REACTIONS, Systemic Reactions), drug blood concentration should be checked. The management of overdose includes close monitoring, supportive care, and symptomatic treatment. Dialysis is of negligible value in the treatment of acute overdose with lidocaine.

In the absence of massive topical overdose or oral ingestion, evaluation of symptoms of toxicity should include consideration of other etiologies for the clinical effects, or overdosage from other sources of lidocaine or other local anesthetics.

Apply lidocaine patch 5% to intact skin to cover the most painful area. Apply up to three patches, only once for up to 12 hours within a 24-hour period. Patches may be cut into smaller sizes with scissors prior to removal of the release liner. (See HANDLING AND DISPOSAL) Clothing may be worn over the area of application. Smaller areas of treatment are recommended in a debilitated patient, or a patient with impaired elimination.

If irritation or a burning sensation occurs during application, remove the patch(es) and do not reapply until the irritation subsides.

Lidocaine patch 5% is available as the following: 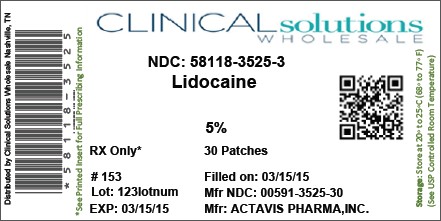