Fluorouracil is indicated for the treatment of patients with:

1.1 Adenocarcinoma of the Colon and Rectum

1.2 Adenocarcinoma of the Breast

Fluorouracil is recommended for administration either as an intravenous bolus or as an intravenous infusion. Do not inject the entire contents of the vial directly into patients. Individualize the dose and dosing schedule of fluorouracil based on tumor type, the specific regimen administered, disease state, response to treatment, and patient risk factors.

2.2 Recommended Dosage for Adenocarcinoma of the Colon and Rectum

2.3 Recommended Dosage for Adenocarcinoma of the Breast

Withhold fluorouracil for any of the following:

Upon resolution or improvement to Grade 1 diarrhea, mucositis, myelosuppression, or palmar-plantar erythrodysesthesia, resume fluorouracil administration at a reduced dose.

There is no recommended dose for resumption of fluorouracil administration following development of any of the following adverse reactions:

Fluorouracil is supplied in a pharmacy bulk package consisting of a vial. The pharmacy bulk package can be used to prepare doses for more than one patient. It is not supplied with a sterile transfer device, which is required for dispensing when multiple doses will be prepared from the single vial. The 50 mL vial is only intended for preparation in a Pharmacy Admixture Service under appropriate conditions for cytotoxic drugs [see References (15)]. Store vial at room temperature.

Do not administer in the same intravenous line concomitantly with other medicinal products.

For bolus administration, store undiluted fluorouracil in the syringe for up to 4 hours at room temperature (25°C). Administer fluorouracil as an intravenous bolus through an established intravenous line.

Store diluted solutions of fluorouracil for up to 4 hours at room temperature (25°C) prior to administration to the patient. For intravenous infusion regimens, administer through a central venous line using an infusion pump.

Fluorouracil injection is supplied as:

Fluorouracil can cause severe diarrhea. Withhold fluorouracil for Grade 3 or 4 diarrhea until resolved or decreased in intensity to Grade 1, then resume fluorouracil at a reduced dose. Administer fluids, electrolyte replacement, or antidiarrheal treatments as necessary.

Fluorouracil can cause palmar-plantar erythrodysesthesia, also known as hand-foot syndrome (HFS). Symptoms of HFS include a tingling sensation, pain, swelling, and erythema with tenderness, and desquamation. HFS occurs more commonly when fluorouracil is administered as a continuous infusion than when fluorouracil is administered as a bolus injection, and has been reported to occur more frequently in patients with previous exposure to chemotherapy. HFS is generally observed after 8-9 weeks of fluorouracil administration but may occur earlier. Institute supportive measures for symptomatic relief of HFS. Withhold fluorouracil administration for Grade 2 or 3 HFS; resume fluorouracil at a reduced dose when HFS is completely resolved or decreased in severity to Grade 1.

Fluorouracil can cause severe and fatal myelosuppression which may include neutropenia, thrombocytopenia, and anemia. The nadir in neutrophil counts commonly occurs between 9 and 14 days after fluorouracil administration. Obtain complete blood counts prior to each treatment cycle, weekly if administered on a weekly or similar schedule, and as needed. Withhold fluorouracil until Grade 4 myelosuppression resolves; resume fluorouracil at a reduced dose when myelosuppression has resolved or improved to Grade 1 in severity.

Clinically significant elevations in coagulation parameters have been reported during concomitant use of warfarin and fluorouracil. Closely monitor patients receiving concomitant coumarin-derivative anticoagulants such as warfarin for INR or prothrombin time in order to adjust the anticoagulant dose accordingly [see Drug Interactions (7)].

Based on its mechanism of action, fluorouracil can cause fetal harm when administered to a pregnant woman. In animal studies, administration of fluorouracil at doses lower than a human dose of 12 mg/kg caused teratogenicity. If this drug is used during pregnancy, or if the patient becomes pregnant while taking this drug, the patient should be apprised of the potential hazard to a fetus. Advise females of reproductive potential and males with female partners of reproductive potential to use effective contraception during and for 3 months following cessation of therapy with fluorouracil [see Use in Specific Populations (8.1, 8.6), Clinical Pharmacology (12.1), and Nonclinical Toxicology (13.1)].

The following adverse reactions are discussed in more detail in other sections of the labeling:

The following adverse reactions have been identified during postapproval use of fluorouracil. Because these reactions are reported voluntarily from a population of uncertain size, it is not always possible to reliably estimate their frequency or establish a causal relationship to drug exposure.

There are no adequate and well-controlled studies with fluorouracil in pregnant women. Based on its mechanism of action, fluorouracil can cause fetal harm when administered to a pregnant woman. Administration of fluorouracil to rats and mice during selected periods of organogenesis, at doses lower than a human dose of 12 mg/kg, caused embryolethality and teratogenicity.

Malformations included cleft palate and skeletal defects. In monkeys, maternal doses of fluorouracil higher than an approximate human dose of 12 mg/kg resulted in abortion. If this drug is used during pregnancy, or if the patient becomes pregnant while taking this drug, apprise the patient of the potential hazard to a fetus [see Clinical Pharmacology (12.1)].

It is not known whether fluorouracil or its metabolites are present in human milk. Because many drugs are present in human milk and because of the potential for serious adverse reactions in nursing infants from fluorouracil, a decision should be made whether to discontinue nursing or to discontinue the drug, taking into account the importance of the drug to the mother.

The safety in pediatric patients has not been established.

Reported clinical experience has not identified differences in safety or effectiveness between the elderly and younger patients.

8.6 Females and Males of Reproductive Potential

Based on its mechanism of action, fluorouracil can cause fetal harm when administered to a pregnant woman. Advise females of reproductive potential to use effective contraception during treatment with fluorouracil and for up to 3 months following cessation of therapy [see Use in Specific Populations (8.1)].

Fluorouracil may damage spermatozoa. Advise males with female partners of reproductive potential to use effective contraception during and for 3 months following cessation of therapy with fluorouracil [see Nonclinical Toxicology (13.1)].

Advise females of reproductive potential that, based on animal data, fertility may be impaired while receiving fluorouracil [see Nonclinical Toxicology (13.1)].

Advise males of reproductive potential that, based on animal data, fertility may be impaired while receiving fluorouracil [see Nonclinical Toxicology (13.1)].

Fluorouracil injection, a nucleoside metabolic inhibitor, is a colorless to yellow, aqueous, sterile, nonpyrogenic injectable solution available in a 50 mL and 100 mL Pharmacy Bulk Package for intravenous administration. Each mL contains 50 mg fluorouracil, USP in water for injection, USP. The pH is adjusted to 8.6 to 9.4 with sodium hydroxide.

Chemically, fluorouracil, USP, a fluorinated pyrimidine, is 5-fluoro-2,4 (1H,3H)-pyrimidinedione.It is white to practically white crystalline powder which is sparingly soluble in water. Its structural formula is: 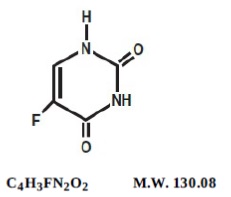 A Pharmacy Bulk Package is a container of a sterile preparation for parenteral use that contains many single doses. The contents are intended for use in a pharmacy admixture program and are restricted to the preparation of admixtures for intravenous infusion.

Fluorouracil is a nucleoside metabolic inhibitor that interferes with the synthesis of deoxyribonucleic acid (DNA) and to a lesser extent inhibits the formation of ribonucleic acid (RNA); these affect rapidly growing cells and may lead to cell death. Fluorouracil is converted to three main active metabolites: 5-fluoro-2′-deoxyuridine-5′-monophosphate (FdUMP), 5-fluorouridine-5′triphosphate (FUTP) and 5-fluoro-2′-deoxyuridine-5′-triphosphate (FdUTP). These metabolites have several effects including the inhibition of thymidylate synthase by FdUMP, incorporation of FUTP into RNA and incorporation of FdUTP into DNA.

Following bolus intravenous injection, 5 – 20 % of the parent drug is excreted unchanged in the urine in six hours. The remaining percentage of the administered dose is metabolized, primarily in the liver. The metabolites of fluorouracil (e.g., urea and α-fluoro-ßalanine) are excreted in the urine over 3 to 4 hours.

Following bolus intravenous injection of fluorouracil, as a single agent, the elimination half-life increased with dose from 8 to 20 minutes.

Carcinogenicity studies have not been performed with fluorouracil. Fluorouracil was mutagenic in vitro in the bacterial reverse mutation (Ames) assay and induced chromosomal aberrations in hamster fibroblasts in vitro and in mouse bone marrow in the in vivo mouse micronucleus assay.

The 50 mL and 100 mL pharmacy bulk packages are packaged 1 vial per carton. 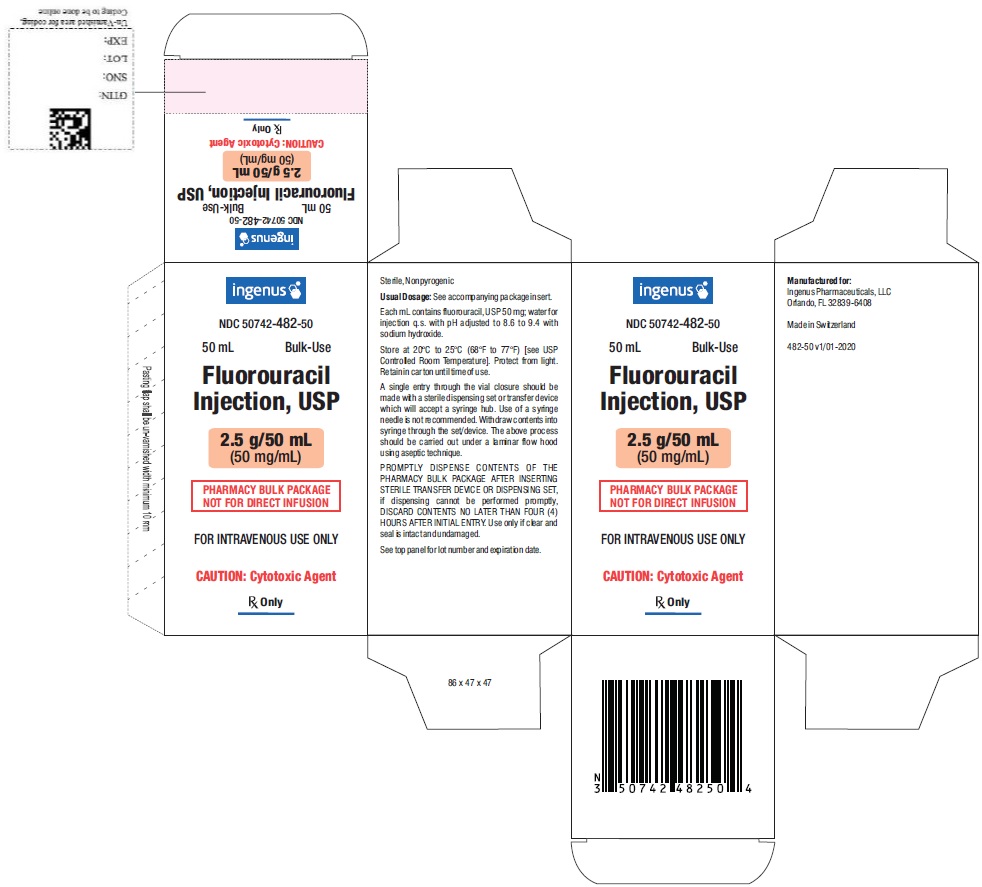 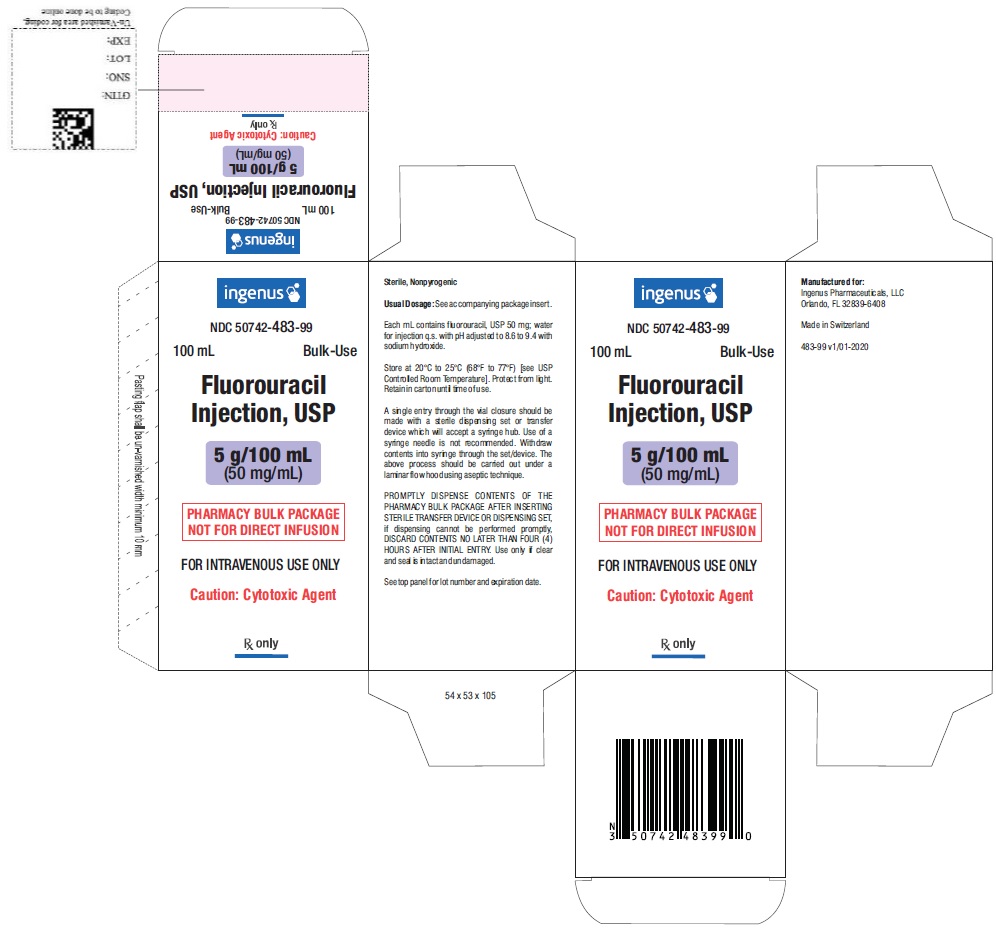