Melphalan Hydrochloride for Injection should be administered under the supervision of a qualified physician experienced in the use of cancer chemotherapeutic agents. Severe bone marrow suppression with resulting infection or bleeding may occur. Controlled trials comparing intravenous (IV) to oral melphalan have shown more myelosuppression with the IV formulation. Hypersensitivity reactions, including anaphylaxis, have occurred in approximately 2% of patients who received the IV formulation. Melphalan is leukemogenic in humans. Melphalan produces chromosomal aberrations in vitro and in vivo and, therefore, should be considered potentially mutagenic in humans.

Melphalan Hydrochloride for Injection is indicated for the palliative treatment of patients with multiple myeloma for whom oral therapy is not appropriate.

Melphalan may cause fetal harm when administered to a pregnant woman. While adequate animal studies have not been conducted with IV melphalan, oral (6 to 18 mg/m2/day for 10 days) and IP (18 mg/m2) administration in rats was embryolethal and teratogenic. Malformations resulting from melphalan included alterations of the brain (underdevelopment, deformation, meningocele, and encephalocele) and eye (anophthalmia and microphthalmos), reduction of the mandible and tail, as well as hepatocele (exomphaly). There are no adequate and well-controlled studies in pregnant women. If this drug is used during pregnancy, or if the patient becomes pregnant while taking this drug, the patient should be apprised of the potential hazard to the fetus. Women of childbearing potential should be advised to avoid becoming pregnant.

Care should be taken to avoid possible extravasation of melphalan hydrochloride for injection and in cases of poor peripheral venous access, consideration should be given to use of a central venous line (see WARNINGS).

Melphalan Hydrochloride for Injection is supplied as follows:

Protect from light. Retain in carton until time of use. 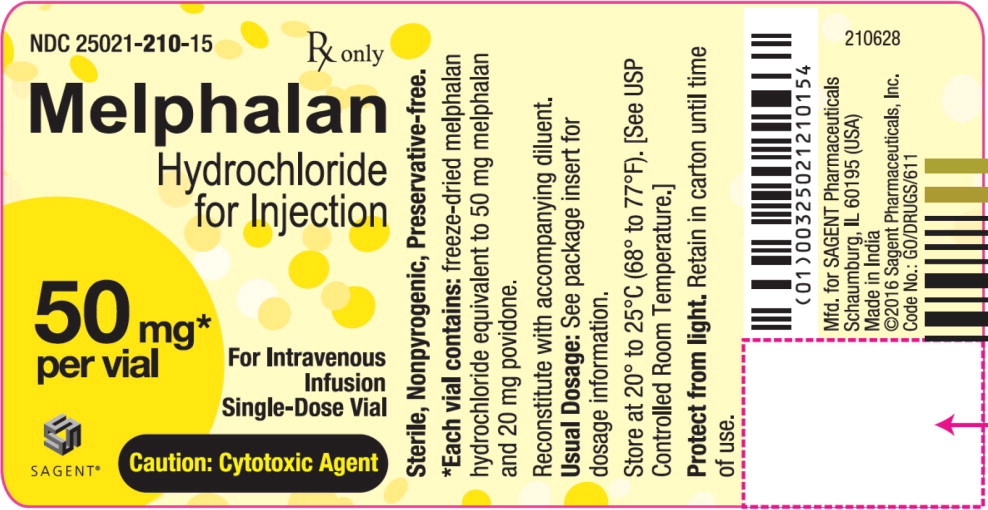 For Drug Diluent Use Only