For the Radiolabeling of Autologous Leukocytes

Diagnostic—For intravenous use
For single dose, single use only

Indium In 111 oxyquinoline (oxine) is a diagnostic radiopharmaceutical intended for radiolabeling autologous leukocytes. It is supplied as a sterile, non-pyrogenic, isotonic aqueous solution with a pH range of 6.5 to 7.5. Each mL of the solution contains 37 MBq, 1 mCi of indium In 111 [no carrier added, >1.85 GBq/µg indium (>50 mCi/µg indium)] at calibration time, 50 µg oxyquinoline, 100 µg polysorbate 80, and 6 mg of HEPES (N-2-hydroxyethyl-piperazine-N'-2-ethane sulfonic acid) buffer in 0.75% sodium chloride solution. The drug is intended for single use only and contains no bacteriostatic agent. The radionuclidic impurity limit for indium 114m is not greater than 37 kBq, 1 µCi of indium 114m per 37 MBq, 1 mCi of indium In 111 at the time of calibration. The radionuclidic composition at expiration time is not less than 99.75% of indium In 111 and not more than 0.25% of indium In 114m/114.

The precise structure of the indium In 111 oxyquinoline complex is unknown at this time. The empirical formula is (C9H6NO)3 In 111.

Indium In 111 decays by electron capture with a physical half-life of 67.2 hours (2.8 days). The energies of the photons that are useful for detection and imaging studies are listed in Table 1.

The exposure rate constant for 37 MBq, 1 mCi indium In 111 is 8.3 × 10-4 C/kg/h (3.21 R/h) at 1 cm. The first half value thickness of lead (Pb) for indium In 111 is 0.023 cm. A range of values for the relative attenuation of the radiation emitted by this radionuclide that results from the interposition of various thicknesses of Pb is shown in Table 2. For example, the use of 0.834 cm of lead will decrease the external radiation exposure by a factor of about 1,000.

These estimates of attenuation do not take into consideration the presence of longer-lived contaminants with higher energy photons, namely indium In 114m/114.

To allow correction for physical decay of indium In 111, the fractions that remain at selected intervals before and after the time of calibration are shown in Table 3.

Indium forms a saturated (1:3) complex with oxyquinoline. The complex is neutral and lipid-soluble, which enables it to penetrate the cell membrane. Within the cell, indium becomes firmly attached to cytoplasmic components; the liberated oxyquinoline is released by the cell. It is thought likely that the mechanism of labeling cells with indium In 111 oxyquinoline involves an exchange reaction between the oxyquinoline carrier and subcellular components which chelate indium more strongly than oxyquinoline. The low stability constant of the oxyquinoline complex, estimated at approximately 10, supports this theory.

Following the recommended leukocyte cell labeling procedure, approximately 77% of the added indium In 111 oxyquinoline is incorporated in the resulting cell pellet (which represents approximately 3-4 × 108 WBC).

Cell clumping can occur and was found in about one fifth of the leukocyte preparations examined. The presence of red blood cells or plasma will lead to reduced leukocyte labeling efficiency. Transferrin in plasma competes for indium In 111 oxyquinoline.

Elimination from the body of injected indium In 111 oxyquinoline is probably mainly through decay to stable cadmium since only a negligible amount (less than 1%) of the dose is excreted in feces and urine in 24 hours.

Clearance from whole blood and biological distribution can vary considerably with the individual recipient, the condition of the injected cells and labeling techniques used.

Release of radioactivity from the labeled cells is about 3% at 1 hour and 24% at 24 hours.

Clearance from liver and spleen, for the purpose of calculating the radiation dose, is assumed to be equal to the physical half-life of indium In 111 (67.2 hours).

Indium In 111 oxyquinoline is indicated for radiolabeling autologous leukocytes.

Indium In 111 oxyquinoline labeled leukocytes may be used as an adjunct in the detection of inflammatory processes to which leukocytes migrate, such as those associated with abscesses or other infection, following reinjection and detection by appropriate imaging procedures. The degree of accuracy may vary with labeling techniques and with the size, location and nature of the inflammatory process.

Due to radiation exposure, indium In 111 oxyquinoline labeled leukocytes could cause fetal harm when administered to pregnant women. If this radiopharmaceutical is used during pregnancy, the patient should be informed of the potential hazard to the fetus.

Indium In 111 oxyquinoline labeled autologous leukocytes should be used only when the benefit to be obtained exceeds the risks involved in children under eighteen years of age owing to the high radiation burden and the potential for delayed manifestation of long-term adverse effects.

Clumping of cells may produce focal accumulations of radioactivity in lungs which do not wash out in 24 hours and thus may lead to false positive results. This phenomenon can be detected by imaging the chest immediately after injection.

The normally high uptake of indium In 111 oxyquinoline labeled leukocytes by spleen and liver may mask inflammatory lesions in these organs. Labeled leukocytes have been observed to accumulate in the colon and accessory spleens of patients with or without disease.

Chemotaxis of granulocytes deteriorates during storage and loss of chemotaxis may cause false negative scans. The spontaneous release of indium In 111 has been reported to range from about 3% at one hour to 24% at 24 hours [ten Berge, R.J.M., Natarajan, A.T., Hardeman, M.R., et al, Labeling with indium In 111 has detrimental effects on human lymphocytes, Journal of Nuclear Medicine, 24, 615-620 (1983)]. The maximum amount of time recommended between drawing the blood and reinjection should not exceed 5 hours. It is recommended that the labeled cells be used within one hour of preparation, if possible and in no case more than three hours after preparation.

Cell aggregates of various degrees have been reported. Cell labeling techniques and standing of cell preparation may be contributing factors.

Nuclear medicine procedures involving withdrawal and reinjection of blood have the potential for transmission of blood borne pathogens. Procedures should be implemented to avoid administration errors and viral contamination of personnel during blood product labeling. A system of checks similar to the ones used for administering blood transfusions should be routine.

Strict aseptic techniques should be used to maintain sterility throughout the procedures for using this product.

Do not use after the expiration time and date (5 days after calibration time) stated on the label.

The contents of the vial are radioactive. Adequate shielding of the preparation must be maintained at all times.

Radiopharmaceuticals should be used only by physicians who are qualified by training and experience in the safe use and handling of radionuclides and whose experience and training have been approved by the appropriate governmental agency authorized to license the use of radionuclides.

Although earlier studies suggested that oxyquinoline (oxine) might have carcinogenic potential, recent studies have found no evidence of carcinogenicity in either rats or mice given oxyquinoline in feed at concentrations of 1,500 or 3,000 ppm for 103 weeks.

It has been reported [ten Berge, R.J.M., Natarajan, A.T., Hardeman, M.R., et al, Labeling with indium In 111 has detrimental effects on human lymphocytes, Journal of Nuclear Medicine, 24, 615-620 (1983)] that human lymphocytes labeled with recommended concentrations of indium In 111 oxyquinoline showed chromosome aberrations consisting of gaps, breaks and exchanges that appear to be radiation induced. At 555 kBq/107, 15 µCi/107 lymphocytes 93% of the cells were reported to be abnormal. The oncogenic potential of such lymphocytes has not been studied. It has been reported that the radiation dose to 108 leukocytes is 9 × 104 mGy (0.9 × 104 rads) from 18.5 MBq, 500 µCi [Goodwin, David A., Cell labeling with oxine chelates of radioactive metal ions: Techniques and clinical implications, Journal of Nuclear Medicine, 19, 557-559 (1978)].

Studies have not been performed to evaluate whether indium In 111 oxyquinoline affects fertility in male or female laboratory animals or humans.

However, Indium Nitrate, a closely related compound, was teratogenic and embryopathic in hamsters. Indium In 111 Oxyquinoline labeled leukocytes should be given to a pregnant woman only if clearly needed.

Ideally, examinations using radiopharmaceuticals, especially those elective in nature, in women of childbearing capability should be performed during the first few (approximately ten) days following the onset of menses.

It is reported that indium 111 is secreted in human milk following administration of indium In 111 labeled leukocytes. Therefore, formula feedings should be substituted for breast feedings.

Safety and effectiveness in pediatric patients below age 18 have not been established (See Warnings).

Other reported clinical experience has not identified differences in responses between the elderly and younger patients. In general, dose selection for an elderly patient should be cautious usually starting at the low end of the dosing range, reflecting the greater frequency of decreased hepatic, renal, or cardiac function, and of concomitant disease or other drug therapy.

Sensitivity reactions (urticaria) have been reported. The presence of fever may mask pyrogenic reactions from indium In 111 oxyquinoline labeled leukocytes. The possibility of delayed adverse reactions has not been studied.

Imaging is recommended at approximately 24 hours post injection. Typically, anterior and posterior views of the chest, abdomen and pelvis should be obtained with other views as required.

Aseptic procedures and a shielded syringe should be employed in the withdrawal of indium In 111 oxyquinoline from the vial. Similar procedures should be employed during the labeling procedure and the administration of the labeled leukocytes to the patient. The user should wear waterproof gloves during the entire procedure. The patient's dose should be measured by a suitable radioactivity calibration system immediately before administration. At this time, the leukocyte preparation should be checked for gross clumping and red blood cell contamination.

The estimated absorbed radiation doses to an adult patient weighing 70 kg from an intravenous dose of 18.5 MBq, 500 µCi of indium In 111 oxyquinoline labeled leukocytes including contributions from indium In 114m/114 as a radionuclidic impurity are shown in Table 4.

The dose of radiation absorbed by the organs will vary with the distribution of the blood cells in the organs, which in turn will depend on the predominance of the cell types labeled and their condition.

Sterile technique must be used throughout. It is important that all equipment used for the preparation of reagents be thoroughly cleaned to assure the absence of trace metal impurities. The user should wear waterproof gloves during the handling and administration procedure.

It is generally advantageous to record any observations on cell abnormalities (e.g., cell clumping). A trypan blue exclusion test may also be performed.

It is recommended that the preparation be used within one hour of labeling (See Precautions).

Indium In 111 oxyquinoline solution is supplied in a vial as a single use only product containing 37 MBq, 1.0 mCi in 1.0 mL aqueous solution at the calibration date stated on the label. Vials are packaged in individual lead shields.

The contents of the vial are radioactive and adequate shielding and handling precautions must be maintained.

This preparation is approved for use by persons licensed by the Illinois Emergency Management Agency pursuant to 32 IL. Adm. Code Section 330.260(a) and 335.4010 or equivalent licenses of the Nuclear Regulatory Commission or an Agreement State.

Indium In 111 oxyquinoline labeled autologous leukocytes should preferably be reinjected within one hour of labeling. The labeled cells may be stored at room temperature 15-25°C (59-77°F) for up to three hours following completion of the cell labeling procedure. Reinjection of indium In 111 oxyquinoline labeled autologous leukocytes more than 5 hours after initial blood drawing is not recommended.

Sterile technique must be used throughout the collection, labeling and re-injection procedures.

GE and the GE Monogram are trademarks of
General Electric Company or one of its subsidiaries. 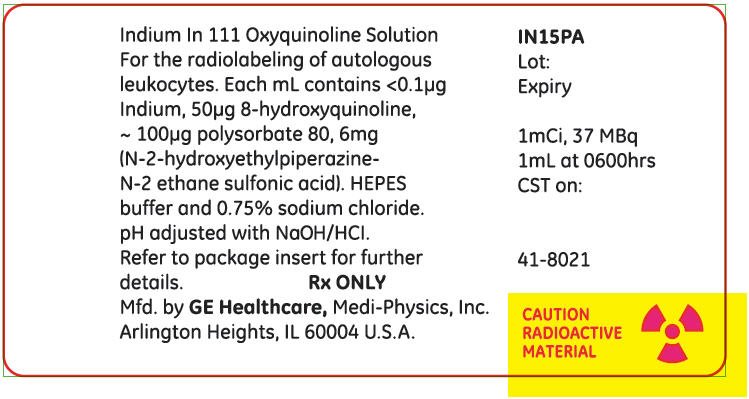