ELOCON® Cream is a corticosteroid indicated for the relief of the inflammatory and pruritic manifestations of corticosteroid-responsive dermatoses in patients 2 years of age or older.

Therapy should be discontinued when control is achieved. If no improvement is seen within 2 weeks, reassessment of diagnosis may be necessary [see Warnings and Precautions (5.1)].

Avoid contact with eyes. Wash hands after each application.

Avoid use on the face, groin, or axillae.

ELOCON Cream is for topical use only. It is not for oral, ophthalmic, or intravaginal use.

Cream, 0.1%. Each gram of ELOCON Cream contains 1 mg of mometasone furoate in a white to off-white smooth and homogenous cream base.

ELOCON Cream is contraindicated in those patients with a history of hypersensitivity to any of the components in the preparation.

Because of the potential for systemic absorption, use of topical corticosteroids may require that patients be periodically evaluated for HPA axis suppression. This may be done by using the adrenocorticotropic hormone (ACTH) stimulation test.

In a study evaluating the effects of mometasone furoate cream on the HPA axis, 15 grams were applied twice daily for 7 days to six adult subjects with psoriasis or atopic dermatitis. The results show that the drug caused a slight lowering of adrenal corticosteroid secretion.

If HPA axis suppression is noted, an attempt should be made to gradually withdraw the drug, to reduce the frequency of application, or to substitute a less potent corticosteroid. Recovery of HPA axis function is generally prompt upon discontinuation of topical corticosteroids. Infrequently, signs and symptoms of glucocorticosteroid insufficiency may occur, requiring supplemental systemic corticosteroids.

Pediatric patients may be more susceptible to systemic toxicity from equivalent doses due to their larger skin surface to body mass ratios [see Use in Specific Populations (8.4)].

Avoid contact of ELOCON Cream with eyes. Advise patients to report any visual symptoms and consider referral to an ophthalmologist for evaluation.

If irritation develops, ELOCON Cream should be discontinued and appropriate therapy instituted. Allergic contact dermatitis with corticosteroids is usually diagnosed by observing a failure to heal rather than noting a clinical exacerbation as with most topical products not containing corticosteroids. Such an observation should be corroborated with appropriate diagnostic patch testing.

If concomitant skin infections are present or develop, an appropriate antifungal or antibacterial agent should be used. If a favorable response does not occur promptly, use of ELOCON Cream should be discontinued until the infection has been adequately controlled.

The following adverse reactions were reported to be possibly or probably related to treatment with ELOCON Cream during clinical trials in 4% of 182 pediatric subjects 6 months to 2 years of age: decreased glucocorticoid levels, 2; paresthesia, 2; folliculitis, 1; moniliasis, 1; bacterial infection, 1; skin depigmentation, 1. The following signs of skin atrophy were also observed among 97 subjects treated with ELOCON Cream in a clinical trial: shininess, 4; telangiectasia, 1; loss of elasticity, 4; loss of normal skin markings, 4; thinness, 1; and bruising, 1.

No drug-drug interaction studies have been conducted with ELOCON Cream.

There are no adequate and well-controlled studies in pregnant women. Therefore, ELOCON Cream should be used during pregnancy only if the potential benefit justifies the potential risk to the fetus.

In mice, mometasone furoate caused cleft palate at subcutaneous doses of 60 mcg/kg and above. Fetal survival was reduced at 180 mcg/kg. No toxicity was observed at 20 mcg/kg. (Doses of 20, 60, and 180 mcg/kg in the mouse are approximately 0.01, 0.02, and 0.05 times the estimated maximum clinical topical dose from ELOCON Cream on a mcg/m2 basis.)

In rats, mometasone furoate produced umbilical hernias at topical doses of 600 mcg/kg and above. A dose of 300 mcg/kg produced delays in ossification, but no malformations. (Doses of 300 and 600 mcg/kg in the rat are approximately 0.2 and 0.4 times the estimated maximum clinical topical dose from ELOCON Cream on a mcg/m2 basis.)

When rats received subcutaneous doses of mometasone furoate throughout pregnancy or during the later stages of pregnancy, 15 mcg/kg caused prolonged and difficult labor and reduced the number of live births, birth weight, and early pup survival. Similar effects were not observed at 7.5 mcg/kg. (Doses of 7.5 and 15 mcg/kg in the rat are approximately 0.005 and 0.01 times the estimated maximum clinical topical dose from ELOCON Cream on a mcg/m2 basis.)

ELOCON Cream may be used with caution in pediatric patients 2 years of age or older, although the safety and efficacy of drug use for longer than 3 weeks have not been established. Since safety and efficacy of ELOCON Cream have not been established in pediatric patients below 2 years of age, its use in this age group is not recommended.

In a pediatric trial, 24 atopic dermatitis subjects, of whom 19 subjects were age 2 to 12 years, were treated with ELOCON Cream once daily. The majority of subjects cleared within 3 weeks.

ELOCON Cream caused HPA axis suppression in approximately 16% of pediatric subjects ages 6 to 23 months, who showed normal adrenal function by Cortrosyn test before starting treatment, and were treated for approximately 3 weeks over a mean body surface area of 41% (range 15%-94%). The criteria for suppression were: basal cortisol level of ≤5 mcg/dL, 30-minute post-stimulation level of ≤18 mcg/dL, or an increase of <7 mcg/dL. Follow-up testing 2 to 4 weeks after trial completion, available for 5 of the subjects, demonstrated suppressed HPA axis function in 1 subject, using these same criteria. Long-term use of topical corticosteroids has not been studied in this population [see Clinical Pharmacology (12.2)].

ELOCON Cream should not be used in the treatment of diaper dermatitis. 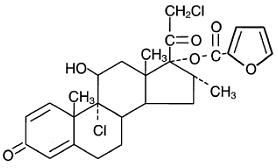 Mometasone furoate is a white to off-white powder practically insoluble in water, slightly soluble in octanol, and moderately soluble in ethyl alcohol.

Like other topical corticosteroids, mometasone furoate has anti-inflammatory, antipruritic, and vasoconstrictive properties. The mechanism of the anti-inflammatory activity of the topical steroids, in general, is unclear. However, corticosteroids are thought to act by the induction of phospholipase A2 inhibitory proteins, collectively called lipocortins. It is postulated that these proteins control the biosynthesis of potent mediators of inflammation such as prostaglandins and leukotrienes by inhibiting the release of their common precursor arachidonic acid. Arachidonic acid is released from membrane phospholipids by phospholipase A2.

Studies performed with ELOCON Cream indicate that it is in the medium range of potency as compared with other topical corticosteroids.

In a study evaluating the effects of mometasone furoate cream on the HPA axis, 15 grams were applied twice daily for 7 days to six adult subjects with psoriasis or atopic dermatitis. The cream was applied without occlusion to at least 30% of the body surface. The results showed that the drug caused a slight lowering of adrenal corticosteroid secretion [see Warnings and Precautions (5.1)].

Ninety-seven pediatric subjects ages 6 to 23 months with atopic dermatitis were enrolled in an open-label HPA axis safety study. ELOCON Cream was applied once daily for approximately 3 weeks over a mean body surface area of 41% (range 15%-94%). In approximately 16% of subjects who showed normal adrenal function by Cortrosyn test before starting treatment, adrenal suppression was observed at the end of treatment with ELOCON Cream. The criteria for suppression were: basal cortisol level of ≤5 mcg/dL, 30-minute post-stimulation level of ≤18 mcg/dL, or an increase of <7 mcg/dL. Follow-up testing 2 to 4 weeks after stopping treatment, available for 5 of the subjects, demonstrated suppressed HPA axis function in one subject, using these same criteria [see Use in Specific Populations (8.4)].

The extent of percutaneous absorption of topical corticosteroids is determined by many factors including the vehicle and the integrity of the epidermal barrier. Studies in humans indicate that approximately 0.4% of the applied dose of ELOCON Cream enters the circulation after 8 hours of contact on normal skin without occlusion. Inflammation and/or other disease processes in the skin may increase percutaneous absorption.

In reproductive studies in rats, impairment of fertility was not produced in male or female rats by subcutaneous doses up to 15 mcg/kg (approximately 0.01 times the estimated maximum clinical topical dose from ELOCON Cream on a mcg/m2 basis).

The two trials showed ELOCON Cream is effective in the treatment of psoriasis and atopic dermatitis.

For topical
use only.

Not for
ophthalmic use. 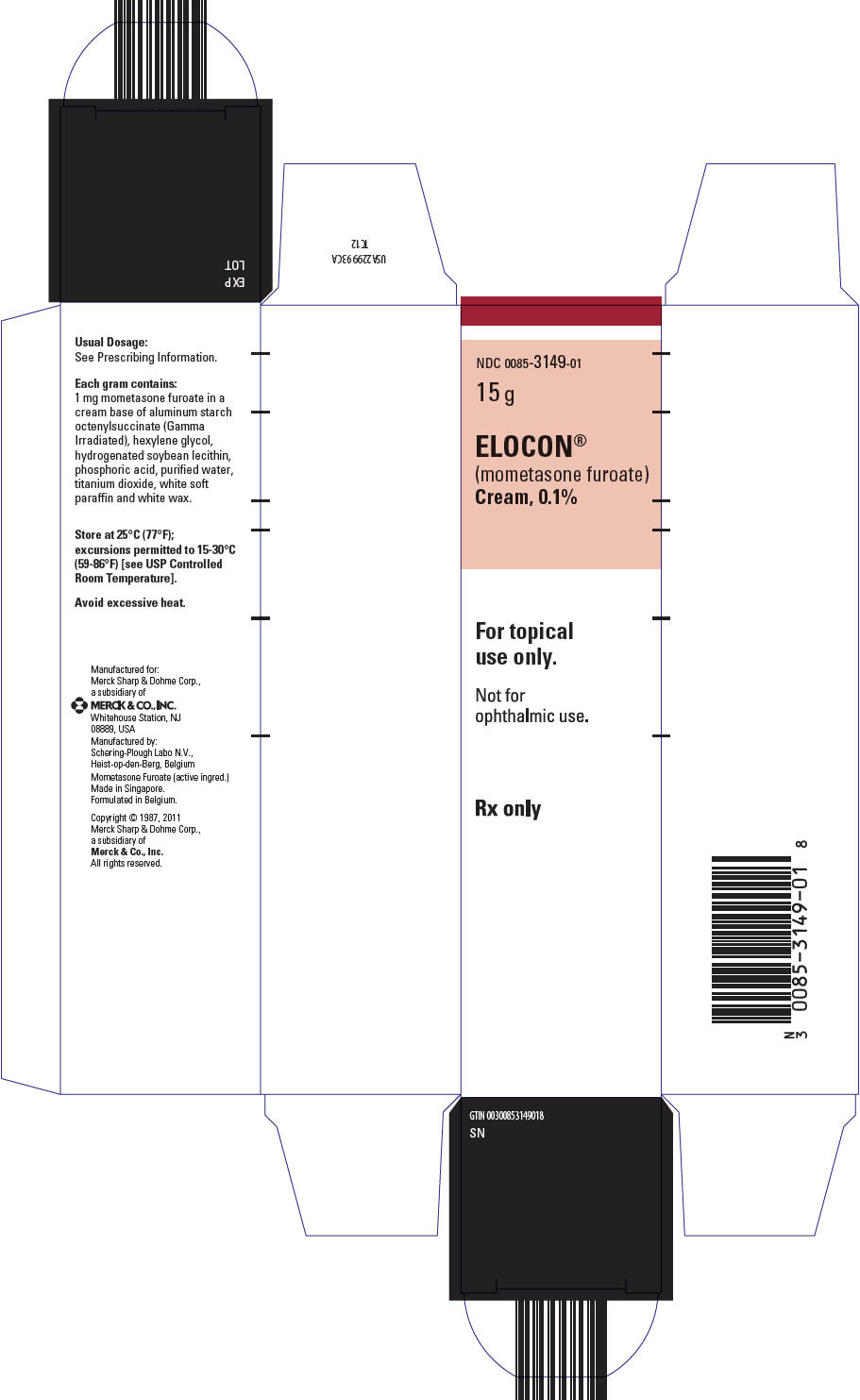