Hydralazine hydrochloride USP, is an antihypertensive, for oral administration. Its chemical name is 1-hydrazinophthalazine monohydrochloride, and its structural formula is:

Although the precise mechanism of action of hydralazine is not fully understood, the major effects are on the cardiovascular system. Hydralazine apparently lowers blood pressure by exerting a peripheral vasodilating effect through a direct relaxation of vascular smooth muscle. Hydralazine, by altering cellular calcium metabolism, interferes with the calcium movements within the vascular smooth muscle that are responsible for initiating or maintaining the contractile state.

The peripheral vasodilating effect of hydralazine results in decreased arterial blood pressure (diastolic more than systolic); decreased peripheral vascular resistance; and an increased heart rate, stroke volume, and cardiac output. The preferential dilatation of arterioles, as compared to veins, minimizes postural hypotension and promotes the increase in cardiac output. Hydralazine usually increases renin activity in plasma, presumably as a result of increased secretion of renin by the renal juxtaglomerular cells in response to reflex sympathetic discharge. This increase in renin activity leads to the production of angiotensin II, which then causes stimulation of aldosterone and consequent sodium reabsorption. Hydralazine also maintains or increases renal and cerebral blood flow. Hydralazine hydrochloride is rapidly absorbed after oral administration, and peak plasma levels are reached at 1-2 hours. Plasma levels of apparent hydralazine decline with a half-life of 3-7 hours. Binding to human plasma protein is 87%. Plasma levels of hydralazine vary widely among individuals. Hydralazine is subject to polymorphic acetylation; slow acetylators generally have higher plasma levels of hydralazine and require lower doses to maintain control of blood pressure. Hydralazine undergoes extensive hepatic metabolism; it is excreted mainly in the form of metabolites in the urine.

In a few patients hydralazine may produce a clinical picture simulating systemic lupus erythematosus including glomerulonephritis. In such patients hydralazine should be discontinued unless the benefit-to-risk determination requires continued antihypertensive therapy with this drug. Symptoms and signs usually regress when the drug is discontinued but residua have been detected many years later. Long-term treatment with steroids may be necessary. (See PRECAUTIONS, Laboratory Tests.)

Myocardial stimulation produced by hydralazine can cause anginal attacks and ECG changes of myocardial ischemia. The drug has been implicated in the production of myocardial infarction. It must, therefore, be used with caution in patients with suspected coronary artery disease. The “hyperdynamic” circulation caused by hydralazine may accentuate specific cardiovascular inadequacies. For example, hydralazine may increase pulmonary artery pressure in patients with mitral valvular disease. The drug may reduce the pressor responses to epinephrine. Postural hypotension may result from hydralazine but is less common than with ganglionic blocking agents. It should be used with caution in patients with cerebral vascular accidents.

In hypertensive patients with normal kidneys who are treated with hydralazine there is evidence of increased renal blood flow and a maintenance of glomerular filtration rate. In some instances where control values were below normal, improved renal function has been noted after administration of hydralazine. However, as with any antihypertensive agent, hydralazine should be used with caution in patients with advanced renal damage.

Complete blood counts and antinuclear antibody titer determinations are indicated before and periodically during prolonged therapy with hydralazine even though the patient is asymptomatic. These studies are also indicated if the patient develops arthralgia, fever, chest pain, continued malaise, or other unexplained signs or symptoms.

A positive antinuclear antibody titer requires that the physician carefully weigh the implications of the test results against the benefits to be derived from antihypertensive therapy with hydralazine.

Blood dyscrasias, consisting of reduction in hemoglobin and red cell count, leukopeia, agranulocytosis, and purpura, have been reported. If such abnormalities develop, therapy should be discontinued.

MAO inhibitors should be used with caution in patients receiving hydralazine.

When other potent parenteral antihypertensive drugs, such as diazoxide, are used in combination with hydralazine, patients should be continuously observed for several hours for any excessive fall in blood pressure. Profound hypotensive episodes may occur when diazoxide injection and hydralazine are used concomitantly.

Administration of Hydralazine with food results in higher plasma levels.

The extent to which these findings indicate a risk to man is uncertain. While long-term clinical observation has not suggested that human cancer is associated with hydralazine use, epidemiologic studies have so far been insufficient to arrive at any conclusions.

There are no adequate and well-controlled studies in pregnant women. Although clinical experience does not include any positive evidence of adverse effects on the human fetus, hydralazine should be used during pregnancy only if the expected benefit justifies the potential risk to the fetus.

Hydralazine has been shown to be excreted in breast milk.

Safety and effectiveness in children have not been established in controlled clinical trials, although there is experience with the use of hydralazine in children. The usual recommended oral starting dosage is 0.75 mg/kg of body weight daily in four divided doses. Dosage may be increased gradually over the next 3-4 weeks to a maximum of 7.5 mg/kg or 200 mg daily.

Adverse reactions with hydralazine are usually reversible when dosage is reduced. However, in some cases it may be necessary to discontinue the drug.

The following adverse reactions have been observed, but there has not been enough systematic collection of data to support an estimate of their frequency.

Signs and Symptoms: Signs and symptoms of overdosage include hypotension, tachycardia, headache, and generalized skin flushing. Complications can include myocardial ischemia and subsequent myocardial infarction, cardiac arrhythmia, and profound shock.

Treatment: There is no specific antidote.

Support of the cardiovascular system is of primary importance. Shock should be treated with plasma expanders. If possible, vasopressors should not be given, but if a vasopressor is required, care should be taken not to precipitate or aggravate cardiac arrhythmia. Tachycardia responds to beta blockers. Digitalization may be necessary, and renal function should be monitored and supported as required. No experience has been reported with extracorporeal or peritoneal dialysis.

The incidence of toxic reactions, particularly the L.E. cell syndrome, is high in the group of patients receiving large doses of hydralazine. In a few resistant patients, up to 300 mg of hydralazine daily may be required for a significant antihypertensive effect. In such cases, a lower dosage of hydralazine combined with a thiazide and/or reserpine or a beta blocker may be considered. However, when combining therapy, individual titration is essential to ensure the lowest possible therapeutic dose of each drug.

Made in India by: 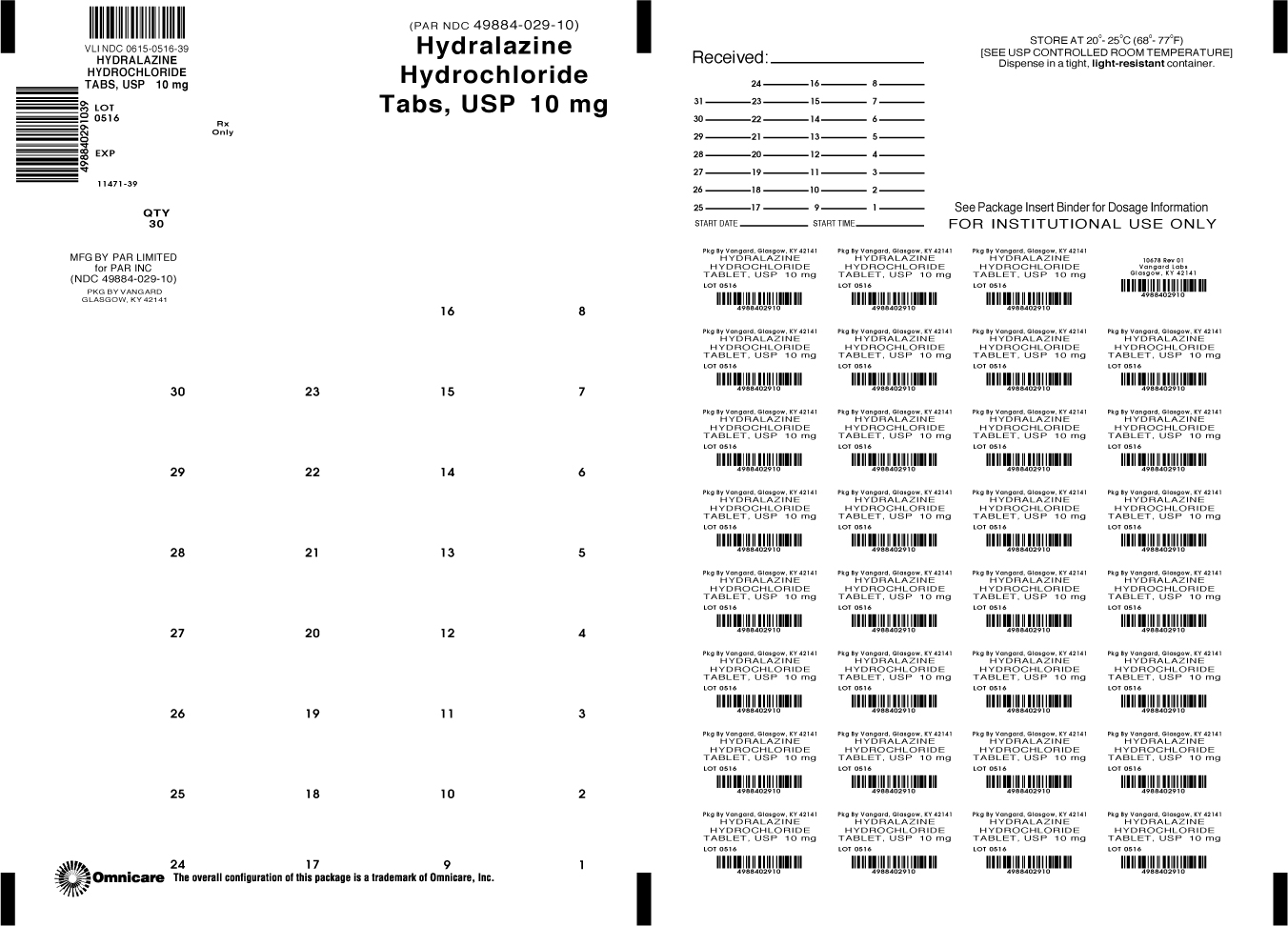 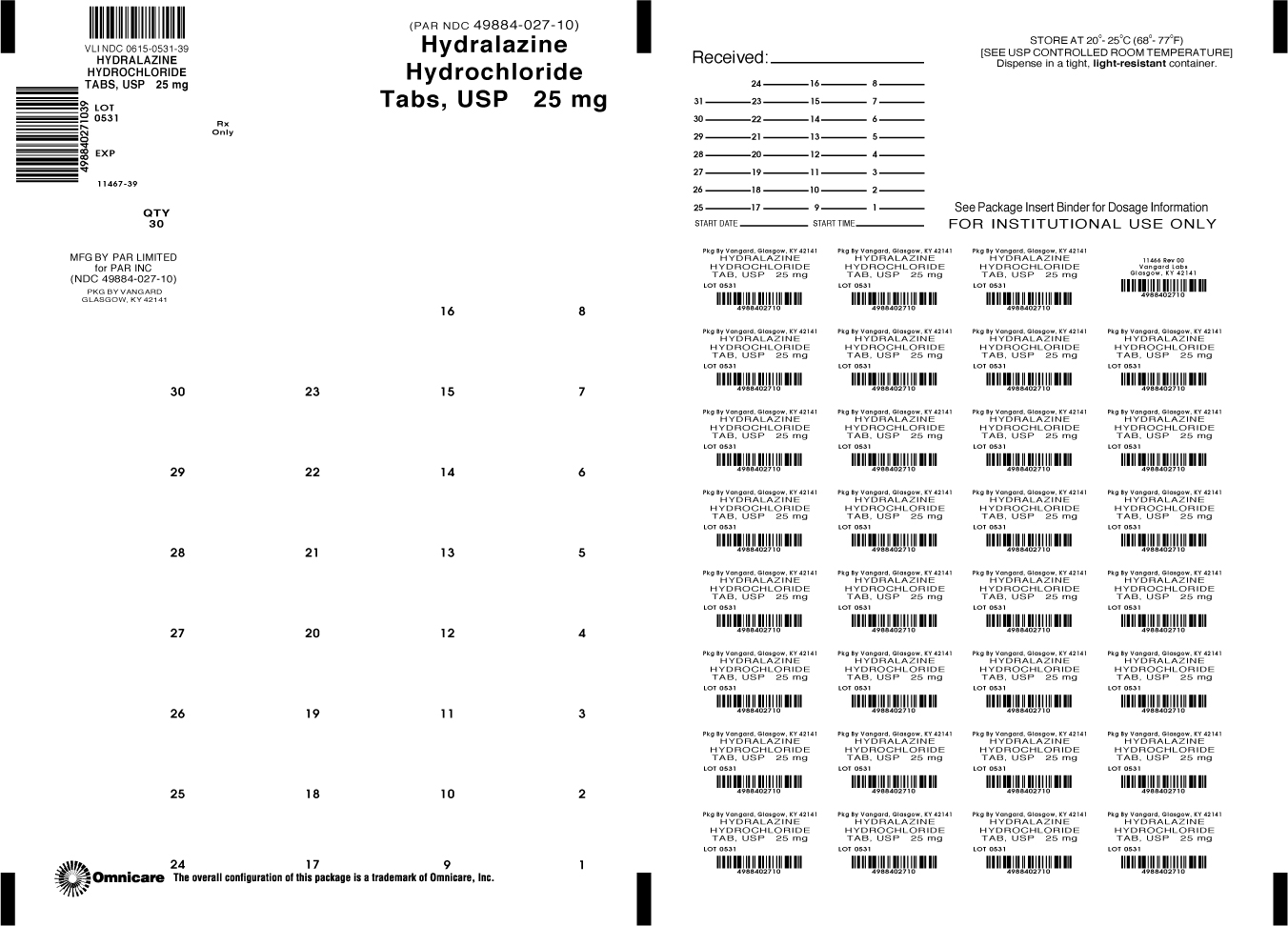 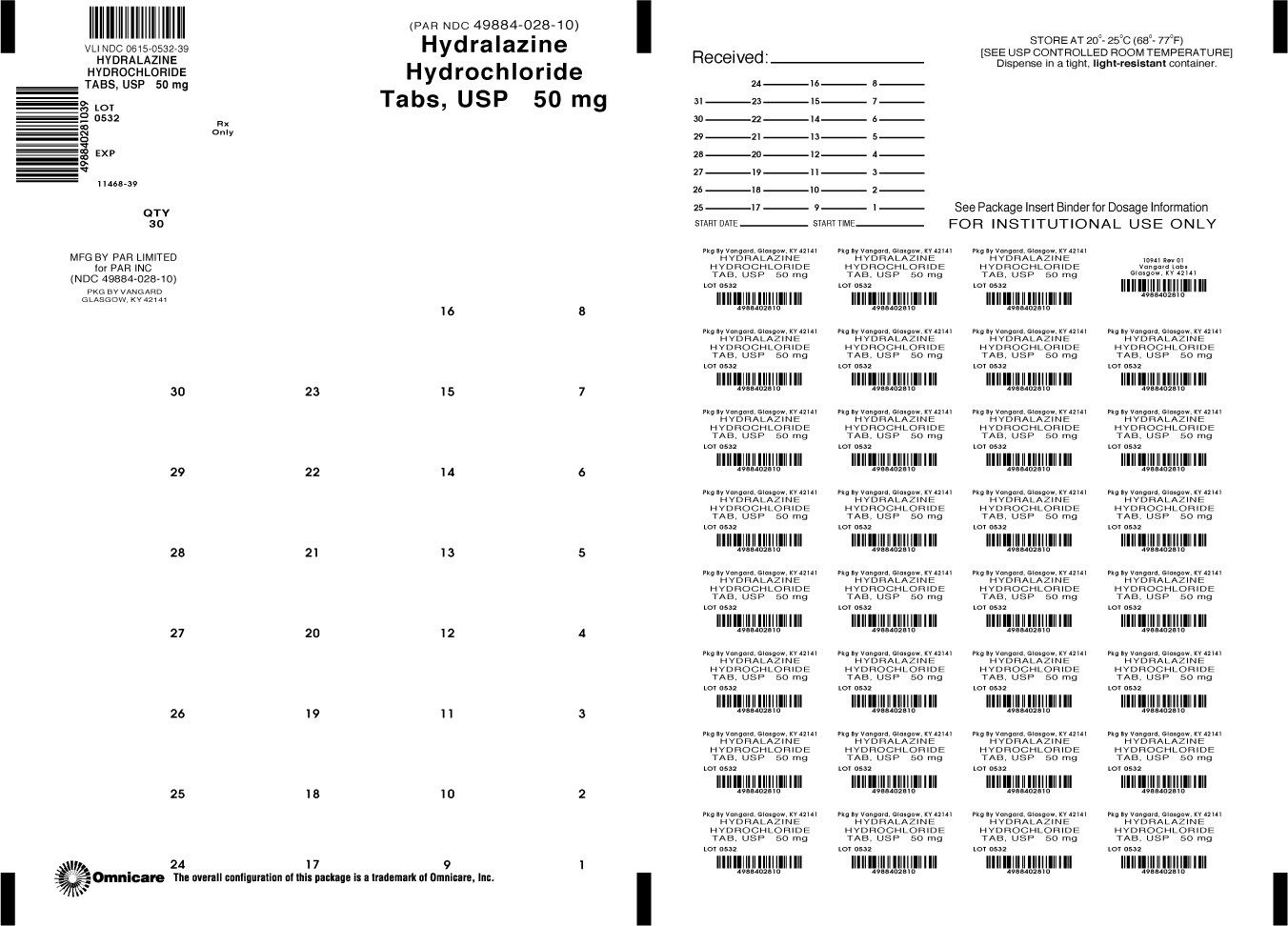 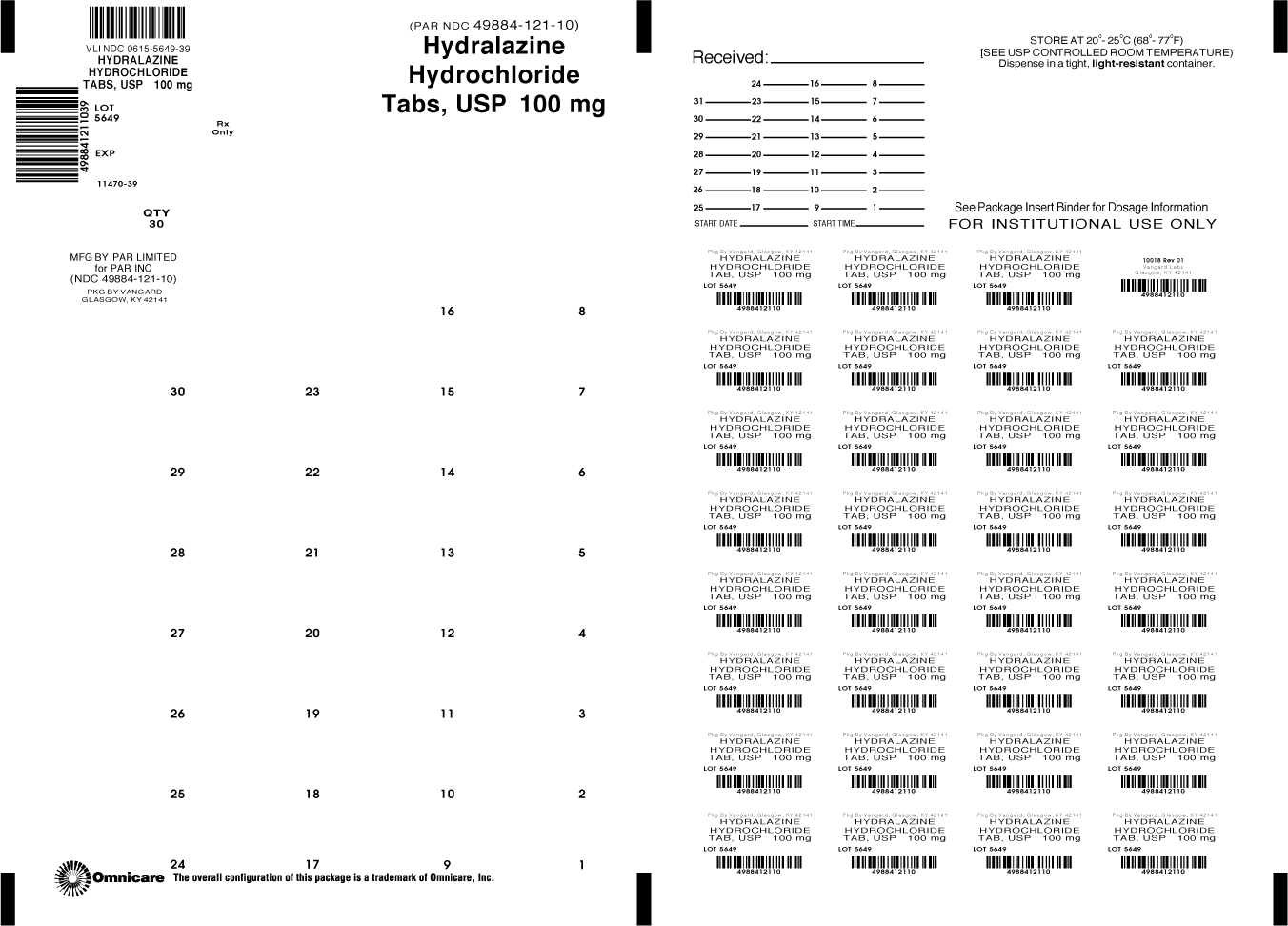