FOR USE ONLY AFTER DILUTION

Ammonium Chloride Injection, USP, 100 mEq, is a sterile, nonpyrogenic solution of ammonium chloride (NH4Cl) in water for injection administered (after dilution) by the intravenous route. Each mL contains 267.5 mg of ammonium chloride 5 mEq of ammonium and 5 mEq of chloride) and edetate disodium (anhydrous) 2 mg added as a stabilizer. pH 4.4 (4.0 to 6.0). May contain hydrochloric acid for pH adjustment. 10 mOsmol/mL (calc.). It is intended to be used only after dilution in a larger volume of isotonic (0.9%) sodium chloride injection.

The solution contains no bacteriostat, antimicrobial agent or added buffer (except for pH adjustment) and is intended only for dilution as a single-dose additive. When smaller doses are required the unused portion should be discarded with the entire additive unit.

The semi-rigid vial is fabricated from a specially formulated polyolefin. It is a copolymer of ethylene and propylene. The safety of the plastic has been confirmed by tests in animals according to USP biological standards for plastic containers. The container requires no vapor barrier to maintain the proper drug concentration.

The ammonium ion (NH4+) in the body plays an important role in the maintenance of acid-base balance. The kidney uses ammonium (NH4+) in place of sodium (Na+) to combine with fixed anions in maintaining acid-base balance, especially as a homeostatic compensatory mechanism in metabolic acidosis.

When a loss of hydrogen ions (H+) occurs and serum chloride (Cl−) decreases, sodium is made available for combination with bicarbonate (HCO3−). This creates an excess of sodium bicarbonate (NaHCO3) which leads to a rise in blood pH and a state of metabolic alkalosis.

The therapeutic effects of ammonium chloride depend upon the ability of the kidney to utilize ammonia in the excretion of an excess of fixed anions and the conversion of ammonia to urea by the liver, thereby liberating hydrogen (H+) and chloride (Cl−) ions into the extracellular fluid.

Ammonium Chloride Injection, USP, after dilution in isotonic sodium chloride injection, may be indicated in the treatment of patients with (1) hypochloremic states and (2) metabolic alkalosis.

Ammonium chloride is contraindicated in patients with severe impairment of renal or hepatic function.

Ammonium chloride should not be administered when metabolic alkalosis due to vomiting of hydrochloric acid is accompanied by loss of sodium (excretion of sodium bicarbonate in the urine).

It should be used with caution in patients with high total CO2 and buffer base secondary to primary respiratory acidosis.

Intravenous administration should be slow to avoid local irritation and toxic effects.

When exposed to low temperatures, concentrated solutions of ammonium chloride may crystallize. If crystals are observed, the vial should be warmed to room temperature in a water bath prior to use.

Do not administer unless the solution is clear and seal is intact. Discard unused portion.

Rapid intravenous administration of ammonium chloride may be accompanied by pain or irritation at the site of injection or along the venous route.

If an adverse reaction does occur, discontinue the infusion, evaluate the patient, institute appropriate therapeutic countermeasures and save the remainder of the fluid for examination if deemed necessary.

Overdosage of ammonium chloride has resulted in a serious degree of metabolic acidosis, disorientation, confusion and coma. Should metabolic acidosis occur following overdosage, the administration of an alkalinizing solution such as sodium bicarbonate or sodium lactate will serve to correct the acidosis.

Ammonium Chloride Injection, USP is administered intravenously and must be diluted before use. Solutions for intravenous infusion should not exceed a concentration of 1% to 2% of ammonium chloride.

Dosage is dependent upon the condition and tolerance of the patient. It is recommended that the contents of one to two vials (100 to 200 mEq) be added to 500 or 1000 mL of isotonic (0.9%) sodium chloride injection. The rate of intravenous infusion should not exceed 5 mL per minute in adults (approximately 3 hours for infusion of 1000 mL). Dosage should be monitored by repeated serum bicarbonate determinations.

CAUTION: MUST BE DILUTED.
FOR I.V. USE. 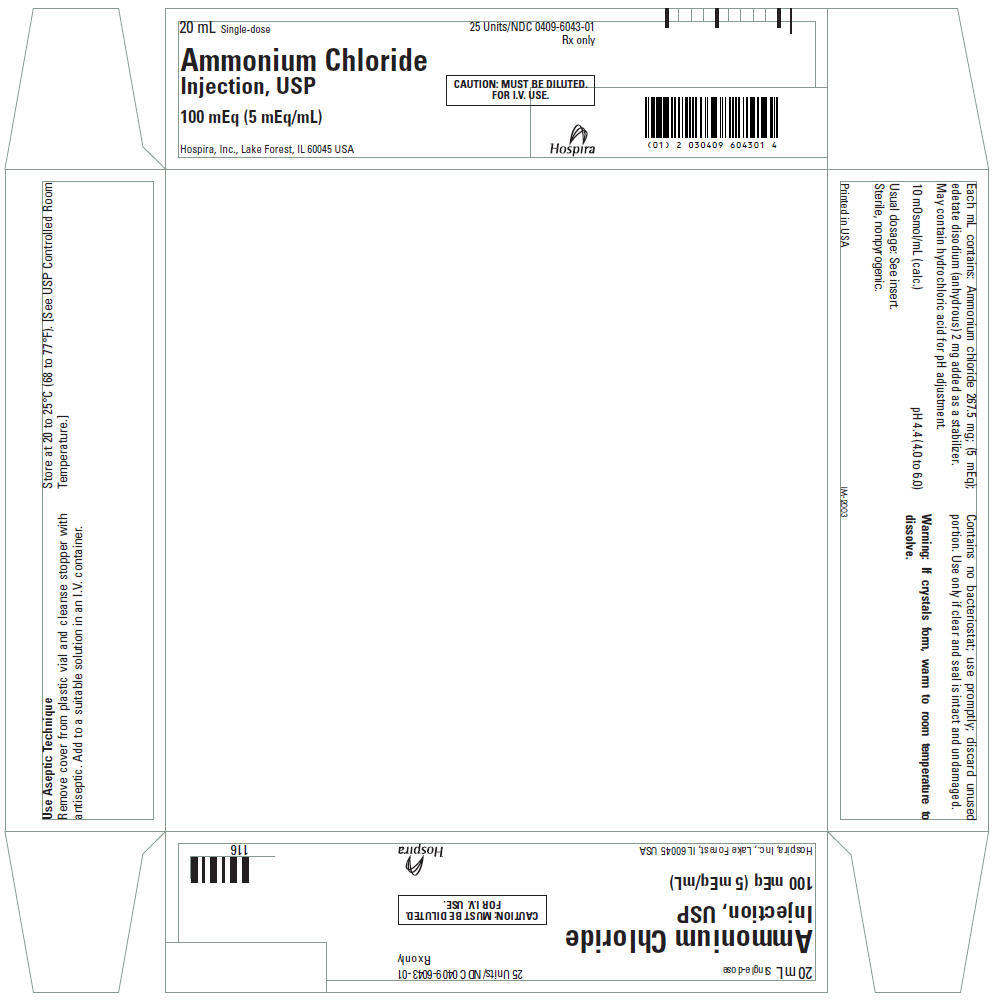