CIV
Analgesic for Parenteral Use
Rx only

TALWIN is a potent analgesic and 30 mg is usually as effective an analgesic as morphine 10 mg or meperidine 75 mg to 100 mg; however, a few studies suggest the TALWIN to morphine ratio may range from 20 mg to 40 mg TALWIN to 10 mg morphine. The duration of analgesia may sometimes be less than that of morphine. Analgesia usually occurs within 15 to 20 minutes after
intramuscular or subcutaneous injection and within 2 to 3 minutes after intravenous injection. TALWIN weakly antagonizes the analgesic effects of morphine, meperidine, and phenazocine; in addition, it produces incomplete reversal of cardiovascular, respiratory, and behavioral depression induced by morphine and meperidine. TALWIN has about 1/50 the antagonistic activity of
nalorphine. It also has sedative activity. Clinical data indicate that differences in various pharmacokinetic parameters may be observed with increasing age. In one study, elderly patients exhibited a longer mean elimination half-life, a lower mean total plasma clearance, and a larger mean area under the concentration-time curve than younger patients.

For the relief of moderate to severe pain. TALWIN may also be used for preoperative or preanesthetic medication and as a supplement to surgical anesthesia.

TALWIN should not be administered to patients who are hypersensitive to it.

Drug Dependence:Special care should be exercised in prescribing pentazocine for emotionally unstable patients and for those with a history of drug misuse. Such patients should be closely supervised when greater than 4 or 5 days of therapy is contemplated. There have been instances of psychological and physical dependence on TALWIN in patients with such a history and, rarely, in patients without such a history. Extended use of parenteral TALWIN may lead to physical or psychological dependence in some patients. When TALWIN is abruptly discontinued, withdrawal symptoms such as abdominal cramps, elevated temperature, rhinorrhea, restlessness, anxiety, and lacrimation may occur. However, even when these have occurred, discontinuance has been accomplished with minimal difficulty. In the rare patient in whom more than minor difficulty has been encountered, reinstitution of parenteral TALWIN with
gradual withdrawal has ameliorated the patient’s symptoms. Substituting methadone or other narcotics for TALWIN in the treatment of the pentazocine abstinence syndrome should be avoided. There have been rare reports of possible abstinence syndromes in newborns after prolonged use of TALWIN during pregnancy. In prescribing parenteral TALWIN for chronic use, particularly if the drug is to be self-administered, the physician should take precautions to avoid increases in dose and frequency of injection by the patient. Just as with all medication, the oral form of TALWIN is preferable for chronic administration.
Tissue Damage at Injection Sites: Severe sclerosis of the skin, subcutaneous tissues, and underlying muscle have occurred at the injection sites of patients who have received multiple doses of pentazocine lactate. Constant rotation of injection sites is, therefore, essential. In addition, animal studies have demonstrated that TALWIN is tolerated less well subcutaneously than intramuscularly. (See DOSAGE AND ADMINISTRATION.)
Head Injury and Increased Intracranial Pressure: As in the case of other potent analgesics, the potential of TALWIN injection for elevating cerebrospinal fluid pressure may be attributed to CO2 retention due to the respiratory depressant effects of the drug. These effects may be markedly exaggerated in the presence of head injury, other intracranial lesions, or a preexisting increase in intracranial pressure. Furthermore, TALWIN can produce effects which may obscure the clinical course of patients with head injuries. In such patients, TALWIN must be used with extreme caution and only if its use is deemed essential.
Acute CNS Manifestations: Patients receiving therapeutic doses of pentazocine have experienced hallucinations (usually visual), disorientation, and confusion which have cleared spontaneously within a period of hours. The mechanism of this reaction is not known. Such patients should be closely observed and vital signs checked. If the drug is reinstituted, it should be done with caution since these acute CNS manifestations may recur. Due to the potential for increased CNS depressant effects, alcohol should be used with caution in patients who are currently receiving pentazocine.
Ambulatory Patients: Since sedation, dizziness, and occasional euphoria have been noted, ambulatory patients should be warned not to operate machinery, drive cars, or unnecessarily expose themselves to hazards.
Myocardial Infarction: Caution should be exercised in the intravenous use of pentazocine for patients with acute myocardial infarction accompanied by hypertension or left ventricular failure. Data suggest that intravenous administration of pentazocine increases systemic and pulmonary arterial pressure and systemic vascular resistance in patients with acute myocardial infarction.
NOTE: Acetone sodium bisulfite, a sulfite that may cause allergic-type reactions including anaphylactic symptoms and life threatening or less severe asthmatic episodes in certain susceptible people, is contained in multiple-dose vials. The overall prevalence of sulfite sensitivity in the general population is unknown and probably low. Sulfite sensitivity is seen more frequently in asthmatic than in nonasthmatic people. The ampuls in the Uni-Amp® Pak do not contain acetone sodium bisulfite.

Certain Respiratory Conditions: The possibility that TALWIN may cause respiratory depression should be considered in treatment of patients with bronchial asthma. TALWIN should be administered only with caution and in low dosage to patients with respiratory depression (e.g., from other medication, uremia, or severe infection), severely limited respiratory reserve, obstructive respiratory conditions, or cyanosis.
Impaired Renal or Hepatic Function: Although laboratory tests have not indicated that TALWIN causes or increases renal or hepatic impairment, the drug should be administered with caution to patients with such impairment. Extensive liver disease appears to predispose to greater side effects (e.g., marked apprehension, anxiety, dizziness, sleepiness) from the usual clinical dose, and may be the result of decreased metabolism of the drug by the liver.
Biliary Surgery: Narcotic drug products are generally considered to elevate biliary tract pressure for varying periods following their administration. Some evidence suggests that pentazocine may differ from other marketed narcotics in this respect (i.e., it causes little or no elevation in biliary tract pressures). The clinical significance of these findings, however, is not yet known.
Patients Receiving Narcotics: TALWIN is a mild narcotic antagonist. Some patients previously given narcotics, including methadone for the daily treatment of narcotic dependence, have experienced withdrawal symptoms after receiving TALWIN.
CNS Effect: Caution should be used when TALWIN is administered to patients prone to seizures; seizures have occurred in a few such patients in association with the use of TALWIN although no cause and effect relationship has been established.
Use in Anesthesia: Concomitant use of CNS depressants with parenteral TALWIN may produce additive CNS depression. Adequate equipment and facilities should be available to identify and treat systemic emergencies should they occur.

Usage in Pregnancy:
Safe use of TALWIN during pregnancy (other than labor) has not been established. Animal reproduction studies have not demonstrated teratogenic or embryotoxic effects. However, TALWIN should be administered to pregnant patients (other than labor) only when, in the judgment of the physician, the potential benefits outweigh the possible hazards. Patients receiving TALWIN during labor have experienced no adverse effects other than those that occur with commonly used analgesics. TALWIN should be used with caution in women delivering premature infants.

Geriatric Use:
Elderly patients may be more sensitive to the analgesic effects of TALWIN than younger patients. (See DOSAGE AND ADMINISTRATION.) Clinical data indicate that differences in various pharmacokinetic parameters of TALWIN may exist between elderly and younger patients. (See CLINICAL PHARMACOLOGY.) Sedating drugs may cause confusion and oversedation in the elderly; elderly patients generally should be started on low doses of TALWIN and observed closely. This drug is known to be substantially excreted by the kidney, and the risk of toxic reactions to this drug may be greater in patients with impaired renal function. Because elderly patients are more likely to have decreased renal function, care should be taken in dose
selection, and it may be useful to monitor renal function.

Adults, Excluding Patients in Labor: The recommended single parenteral dose is 30 mg by intramuscular, subcutaneous, or intravenous route. This may be repeated every 3 to 4 hours. Doses in excess of 30 mg intravenously or 60 mg intramuscularly or subcutaneously are not recommended. Total daily dosage should not exceed 360 mg. Elderly patients may be more sensitive to the analgesic effects of TALWIN than younger patients. Elderly patients generally should be started on low doses of TALWIN and observed closely. The subcutaneous route of administration should be used only when necessary because of possible severe tissue damage at injection sites (see WARNINGS). When frequent injections are needed, the drug should be administered intramuscularly. In addition, constant rotation of injection sites (e.g., the upper outer quadrants of the buttocks, mid-lateral aspects of the thighs, and the deltoid areas) is
essential.
Patients in Labor: A single, intramuscular 30 mg dose has been most commonly administered. An intravenous 20 mg dose has given adequate pain relief to some patients in labor when contractions become regular, and this dose may be given two or three times at two to three-hour intervals, as needed.
Pediatric Patients Excluding Patients Less Than One Year Old: The recommended single parenteral dose as premedication for sedation is 0.5 mg/kg by intramuscular route.
CAUTION: TALWIN should not be mixed in the same syringe with soluble barbiturates because precipitation will occur.

Manifestations: Clinical experience with TALWIN overdosage has been insufficient to define the signs of this condition.
Treatment: Oxygen, intravenous fluids, vasopressors, and other supportive measures should be employed as indicated. Assisted or controlled ventilation should also be considered. For respiratory depression due to overdosage or unusual sensitivity to TALWIN, parenteral naloxone is a specific and effective antagonist.

Each mL contains pentazocine lactate equivalent to 30 mg base and 2.8 mg sodium chloride, in Water for Injection.

The pH of TALWIN solutions is adjusted between 4 and 5 with lactic acid or sodium hydroxide. The air in the ampuls and vials has
been displaced by nitrogen gas. Store at 20 to 25°C (68 to 77°F). [See USP Controlled Room Temperature.] 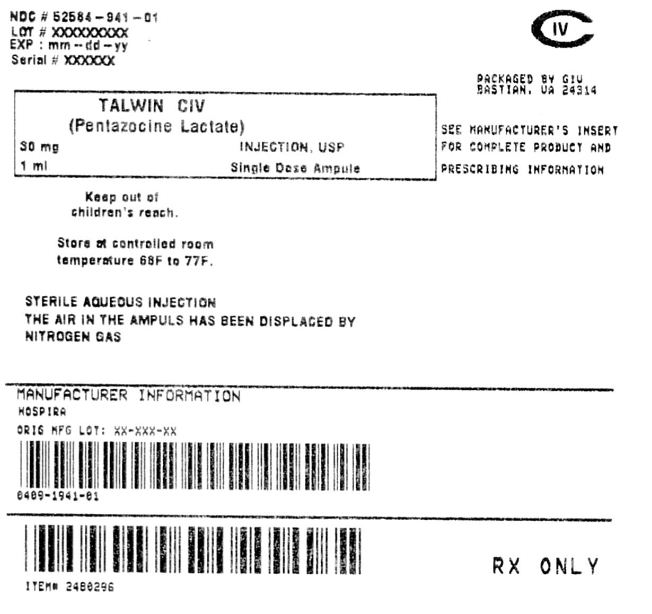