Pitressin (Vasopressin Injection, USP) Synthetic is a sterile, aqueous solution of synthetic vasopressin (8-Arginine vasopressin) of the posterior pituitary gland. It is substantially free from the oxytocic principle and is standardized to contain 20 USP units/mL. The solution contains 0.5% Chlorobutanol (chloroform derivative) as a preservative. The acidity of the solution is adjusted with acetic acid.

The antidiuretic action of vasopressin is ascribed to increasing reabsorption of water by the renal tubules.

Vasopressin can cause contraction of smooth muscle of the gastrointestinal tract and of all parts of the vascular bed, especially the capillaries, small arterioles, and venules with less effect on the smooth musculature of the large veins. The direct effect on the contractile elements is neither antagonized by adrenergic blocking agents nor prevented by vascular denervation.

Following subcutaneous or intramuscular administration of vasopressin injection, the duration of antidiuretic activity is variable but effects are usually maintained for 2 to 8 hours.

Anaphylaxis or hypersensitivity to the drug or its components.

Pitressin is indicated for prevention and treatment of postoperative abdominal distention, in abdominal roentgenography to dispel interfering gas shadows, and in diabetes insipidus.

This drug should not be used in patients with vascular disease, especially disease of the coronary arteries, except with extreme caution. In such patients, even small doses may precipitate anginal pain, and with larger doses, the possibility of myocardial infarction should be considered.

Vasopressin may produce water intoxication. The early signs of drowsiness, listlessness, and headaches should be recognized to prevent terminal coma and convulsions.

Vasopressin should be used cautiously in the presence of epilepsy, migraine, asthma, heart failure, or any state in which a rapid addition to extracellular water may produce hazard for an already overburdened system.

Chronic nephritis with nitrogen retention contraindicates the use of vasopressin until reasonable nitrogen blood levels have been attained.

Side effects such as blanching of skin, abdominal cramps, and nausea may be reduced by taking 1 or 2 glasses of water at the time of vasopressin administration. These side effects are usually not serious and probably will disappear within a few minutes.

Electrocardiograms (ECG) and fluid and electrolyte status determinations are recommended at periodic intervals during therapy.

Doses of vasopressin sufficient for an antidiuretic effect are not likely to produce tonic uterine contractions that could be deleterious to the fetus or threaten the continuation of the pregnancy.

Caution should be exercised when Pitressin is administered to a nursing woman.

Local or systemic allergic reactions may occur in hypersensitive individuals. The following side effects have been reported following the administration of vasopressin.

Body as a Whole: anaphylaxis (cardiac arrest and/or shock) has been observed shortly after injection of vasopressin.

Pitressin may be administered subcutaneously or intramuscularly.

Ten units of Pitressin (0.5 mL) will usually elicit full physiologic response in adult patients; 5 units will be adequate in many cases. Pitressin should be given intramuscularly at 3- or 4-hour intervals as needed. The dosage should be proportionately reduced for pediatric patients. (For an additional discussion of dosage, consult the sections below.)

When determining the dose of Pitressin for a given case, the following should be kept in mind.

It is particularly desirable to give a dose not much larger than is just sufficient to elicit the desired physiologic response. Excessive doses may cause undesirable side effects—blanching of the skin, abdominal cramps, nausea—which, though not serious, may be alarming to the patient. Spontaneous recovery from such side effects occurs in a few minutes. It has been found that one or two glasses of water given at the time Pitressin is administered reduce such symptoms.

In the average postoperative adult patient, give 5 units (0.25 mL) initially; increase to 10 units (0.5 mL) at subsequent injections if necessary. It is recommended that Pitressin be given intramuscularly and that injections be repeated at 3- or 4-hour intervals as required. Dosage to be reduced proportionately for pediatric patients.

Pitressin used in this manner will frequently prevent or relieve postoperative distention. These recommendations apply also to distention complicating pneumonia or other acute toxemias.

For the average case, two injections of 10 units each (0.5 mL) are suggested. These should be given two hours and one-half hour, respectively, before films are exposed. Many roentgenologists advise giving an enema prior to the first dose of Pitressin.

Prescribing Information as of October 2012. 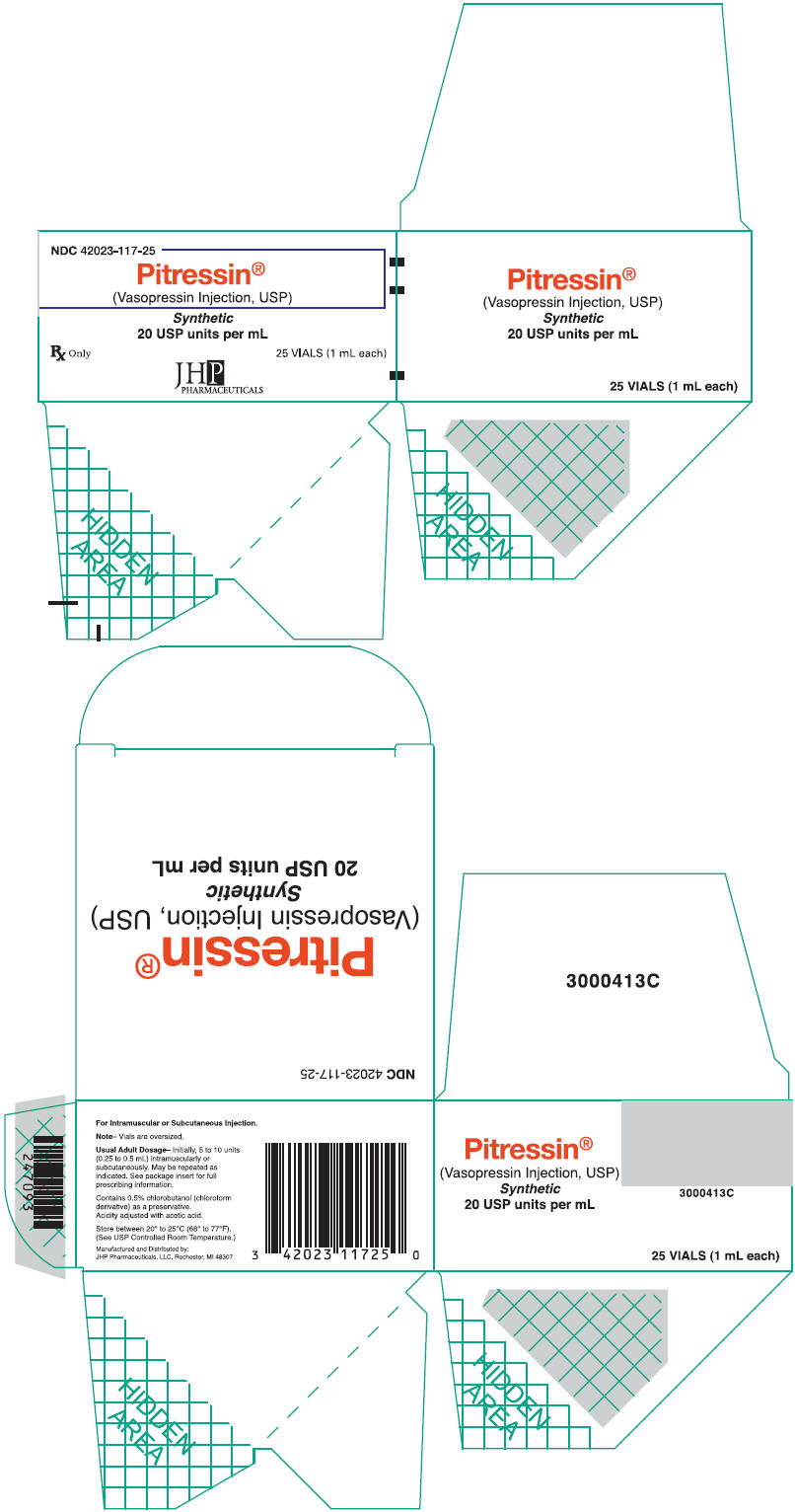