Mesna Injection is indicated as a prophylactic agent in reducing the incidence of ifosfamide-induced hemorrhagic cystitis.

Limitation of Use:
Mesna Injection is not indicated to reduce the risk of hematuria due to other pathological conditions such as thrombocytopenia.

Mesna injection may be given on a fractionated dosing schedule of three bolus intravenous injections as outlined below.

Mesna injection may be given on a fractionated dosing schedule of a single bolus injection followed by two oral administrations of mesna tablets as outlined below.

The efficacy and safety of this ratio of intravenous and oral mesna has not been established as being effective for daily doses of ifosfamide higher than 2 g/m2.

Patients who vomit within two hours of taking oral mesna should repeat the dose or receive intravenous mesna injection.

Maintain adequate hydration and sufficient urinary output, as required for ifosfamide treatment, and monitor urine for the presence of hematuria. If severe hematuria develops when mesna injection is given according to the recommended dosage schedule, dosage reductions or discontinuation of ifosfamide therapy may be required.

2.4 Preparation for Intravenous Administration and Stability

Preparation
Determine the volume of mesna injection for the intended dose.

Dilute the volume of mesna injection for the dose in any of the following fluids to obtain a final concentration of 20 mg/mL:

Stability
The mesna injection multidose vials may be stored and used for up to 8 days after initial puncture.

Do not mix mesna injection with epirubicin, cyclophosphamide, cisplatin, carboplatin, and nitrogen mustard.

Parenteral drug products should be inspected visually for particulate matter and discoloration prior to administration whenever solution and container permit.  Any solutions which are discolored, hazy, or contain visible particulate matter should not be used.

Mesna injection is contraindicated in patients known to be hypersensitive to mesna or to any of the excipients [see Warnings and Precautions (5.1)].

Drug rash with eosinophilia and systemic symptoms and bullous and ulcerative skin and mucosal reactions, consistent with Stevens-Johnson syndrome or toxic epidermal necrolysis have occurred. Mesna may cause skin and mucosal reactions characterized by urticaria, rash, erythema, pruritus, burning sensation, angioedema, periorbital edema, flushing and stomatitis. These reactions may occur with the first exposure or after several months of exposure. Discontinue mesna and provide supportive care.

False-Positive Urine Tests for Ketone Bodies
A false positive test for urinary ketones may arise in patients treated with mesna injection when using nitroprusside sodium-based urine tests (including dipstick tests).  The addition of glacial acetic acid can be used to differentiate between a false positive result (cherry-red color that fades) and a true positive result (red-violet color that intensifies).

False-Negative Tests for Enzymatic CPK Activity
Mesna may interfere with enzymatic creatinine phosphokinase (CPK) activity tests that use a thiol compound (e.g., N-acetylcysteine) for CPK reactivation. This may result in a falsely low CPK level.

5.5 Use in Patients with a History of Adverse Reactions to Thiol Compounds

The following are discussed in more detail in other sections of the labeling.

Because mesna is used in combination with ifosfamide or ifosfamide-containing chemotherapy regimens, it is difficult to distinguish the adverse reactions which may be due to mesna from those caused by the concomitantly administered cytotoxic agents.

Adverse reactions reasonably associated with mesna administered intravenously and orally in four controlled studies in which patients received ifosfamide or ifosfamide-containing regimens are presented in Table 3.


1Intravenous dosing of ifosfamide and mesna followed by either intravenous or oral doses of mesna according to the applicable dosage schedule [see Dosage and Administration (2)].

The following adverse reactions have been reported in the postmarketing experience of patients receiving mesna in combination with ifosfamide or similar drugs, making it difficult to distinguish the adverse reactions which may be due to mesna from those caused by the concomitantly administered cytotoxic agents. Because these reactions are reported from a population of unknown size, precise estimates of frequency cannot be made.

No clinical drug interaction studies have been conducted with mesna injection.

Risk Summary
There are no studies of mesna in pregnant women. Reproduction studies performed in rats and rabbits at oral doses approximately 10 times the maximum recommended total daily intravenous-oral-oral human dose on a body surface area basis (1000 mg/kg in rabbits and 2000 mg/kg in rats) revealed no evidence of harm to the fetus due to mesna. The incidence of malformations in human pregnancies has not been established for mesna.  All pregnancies, regardless of drug exposure, have a background rate of 2 to 4% for major malformations and 15 to 20% for pregnancy loss. Because animal reproductive studies are not always predictive of human response, this drug should be used during pregnancy only if clearly needed.

It is not known whether mesna or dimesna is excreted in human milk. Benzyl alcohol present in maternal serum is likely to cross into human milk and may be orally absorbed by a nursing infant. Because many drugs are excreted in human milk and because of the potential for adverse reactions in nursing infants from mesna, a decision should be made whether to discontinue nursing or discontinue the drug, taking into account the importance of the drug to the mother.

Safety and effectiveness of mesna injection in pediatric patients have not been established. Mesna injection contains benzyl alcohol (10.4 mg benzyl alcohol per mL) which has been associated with serious adverse reactions and death in pediatric patients. The "gasping syndrome," (characterized by central nervous system depression, metabolic acidosis and gasping respirations) has been associated with benzyl alcohol dosages >99 mg/kg/day in neonates, premature, and low-birth weight infants. Additional symptoms may include gradual neurological deterioration, seizures, intracranial hemorrhage, hematologic abnormalities, skin breakdown, hepatic and renal failure, hypotension, bradycardia, and cardiovascular collapse. The minimum amount of benzyl alcohol at which toxicity may occur is not known. Neonates, premature, and low-birth weight infants, as well as patients receiving high dosages, may be more likely to develop toxicity.  Practitioners administering this and other medications containing benzyl alcohol should consider the combined daily metabolic load of benzyl alcohol from all sources [see Warnings and Precautions (5.3)].

Clinical studies of mesna injection did not include sufficient numbers of subjects aged 65 and over to determine whether they respond differently from younger subjects. In general, dose selection for an elderly patient should be cautious, reflecting the greater frequency of decreased hepatic, renal, or cardiac function, and of concomitant disease or other drug therapy. The ratio of ifosfamide to mesna should remain unchanged.

8.6 Use in Patients with Renal Impairment

No clinical studies were conducted to evaluate the effect of renal impairment on the pharmacokinetics of mesna injection.

8.7 Use in Patients with Hepatic Impairment

No clinical studies were conducted to evaluate the effect of hepatic impairment on the pharmacokinetics of mesna injection.

There is no known antidote for mesna injection.

Postmarketing, administration of 4.5 g to 6.9 g of mesna resulted in hypersensitivity reactions including mild hypotension, shortness of breath, asthma exacerbation, rash, and flushing.


Mesna injection is a detoxifying agent to inhibit the hemorrhagic cystitis induced by ifosfamide. The active ingredient, mesna, is a synthetic sulfhydryl compound designated as sodium-2-mercaptoethane sulfonate with a molecular formula of C2H5NaO3S2 and a molecular weight of 164.18. Its structural formula is as follows:

Absorption
Following oral administration, peak plasma concentrations were reached within 1.5 to 4 hours and 3 to 7 hours for free mesna and total mesna (mesna plus dimesna and mixed disulfides), respectively. Oral bioavailability averaged 58% (range 45 to 71%) for free mesna and 89% (range 74 to 104%) for total mesna based on plasma AUC data from 8 healthy volunteers who received 1200 mg oral or intravenous doses.

Food does not affect the urinary availability of orally administered mesna.

Metabolism
Analogous to the physiological cysteine-cystine system, mesna is rapidly oxidized to its major metabolite, mesna disulfide (dimesna).  Plasma concentrations of mesna exceed those of dimesna after oral or intravenous administration.

No long-term studies in animals have been performed to evaluate the carcinogenic potential of mesna.

Mesna was not genotoxic in the in vitro Ames bacterial mutagenicity assay, the in vitro mammalian lymphocyte chromosomal aberration assay or the in vivo mouse micronucleus assay.


No studies on male or female fertility were conducted. No signs of male or female reproductive organ toxicity were seen in 6-month oral rat studies (≤2000 mg/kg/day) or 29-week oral dog studies (520 mg/kg/day) at doses approximately 10-fold higher than the maximum recommended human dose on a body surface area basis.

Clinical studies comparing recommended intravenous and oral mesna dosing regimens demonstrated incidences of grade 3 to 4 hematuria of <5%. Study 7 was an open label, randomized, two-way crossover study comparing three intravenous doses with an initial intravenous dose followed by two oral doses of mesna in patients with cancer treated with ifosfamide at a dose of 1.2 g/m2 to 2.0 g/m2 for 3 to 5 days. Study 8 was a randomized, multicenter study in cancer patients receiving ifosfamide at 2.0 g/m2 for 5 days. In both studies, development of grade 3 or 4 hematuria was the primary efficacy endpoint. The percent of patients developing hematuria in each of these studies is presented in Table 5.

Mesna Injection is supplied as follows:

Sterile
FOR INTRAVENOUS USE

Sterile
FOR INTRAVENOUS USE 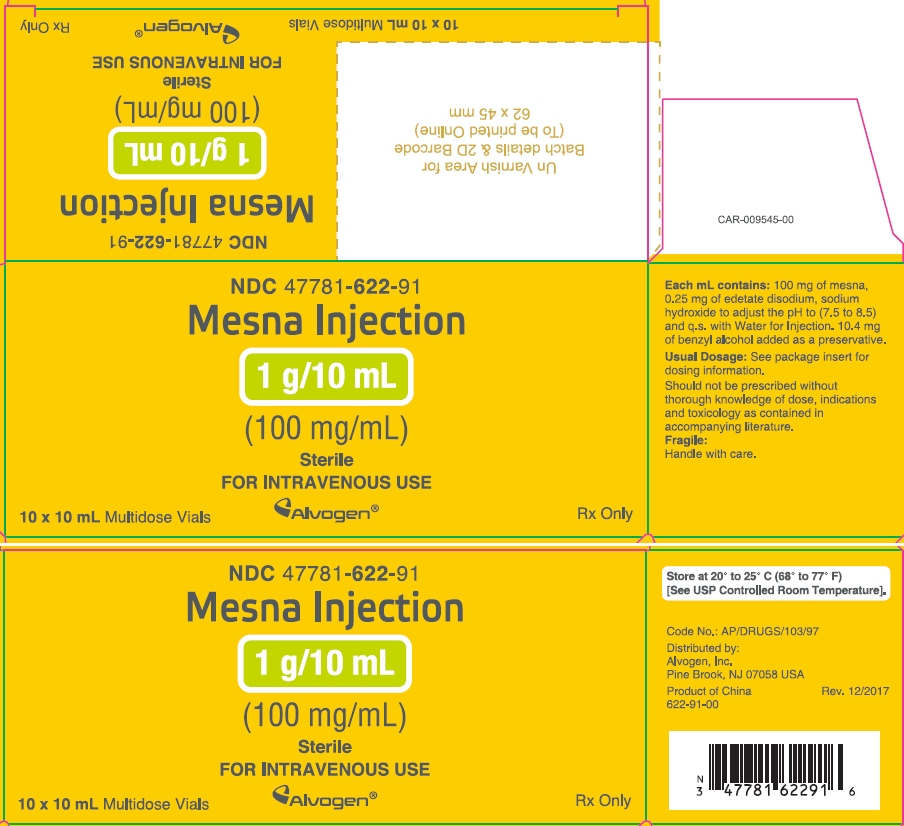