Serious hepatotoxicity, including cases with a fatal outcome or requiring liver transplantation has occurred with the use of oral ketoconazole. Some patients had no obvious risk factors for liver disease. Patients receiving this drug should be informed by the physician of the risk and should be closely monitored. See WARNINGS section. 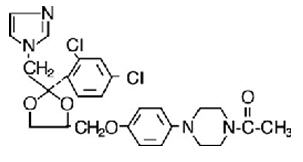 Ketoconazole is a white to slightly beige, odorless powder, soluble in acids, with a molecular weight of 531.44.

Ketoconazole is a weak dibasic agent and thus requires acidity for dissolution and absorption.

Mean peak plasma concentrations of approximately 3.5 µg/mL are reached within 1 to 2 hours, following oral administration of a single 200 mg dose taken with a meal. Oral bioavailability is maximal when the tablets are taken with a meal.

In vitro, the plasma protein binding is about 99% mainly to the albumin fraction. Ketoconazole is widely distributed into tissues; however, only a negligible proportion reaches the cerebrospinal fluid.

Following absorption from the gastrointestinal tract, NIZORAL® is converted into several inactive metabolites. In vitro studies have shown that CYP3A4 is the major enzyme involved in the metabolism of ketoconazole. The major identified metabolic pathways are oxidation and degradation of the imidazole and piperazine rings, by hepatic microsomal enzymes. In addition, oxidative O-dealkylation and aromatic hydroxylation does occur. Ketoconazole has not been demonstrated to induce its own metabolism.

Elimination from plasma is biphasic with a half-life of 2 hours during the first 10 hours and 8 hours thereafter.

Approximately 13% of the dose is excreted in the urine, of which 2 to 4% is unchanged drug. The major route of excretion is through the bile into the intestinal tract with about 57% being excreted in the feces.

Patients with Hepatic or Renal Impairment

In patients with hepatic or renal impairment, the overall pharmacokinetics of ketoconazole was not significantly different when compared with healthy subjects.

Limited pharmacokinetic data are available on the use of NIZORAL® Tablets in the pediatric population.

Measurable ketoconazole plasma concentrations have been observed in pre-term infants (single or daily doses of 3 to 10 mg/kg) and in pediatric patients 5 months of age and older (daily doses of 3 to 13 mg/kg) when the drug was administered as a suspension, tablet or crushed tablet. Limited data suggest that absorption may be greater when the drug is administered as a suspension compared to a crushed tablet. Conditions that raise gastric pH may lower or prevent absorption (See Section PRECAUTIONS: Drug Interactions). Maximum plasma concentrations occurred 1 to 2 hours after dosing and were in the same general range as those seen in adults who received a 200–400 mg dose.

Pre-clinical electrophysiological studies have shown that ketoconazole inhibits the rapidly activating component of the cardiac delayed rectifier potassium current, prolongs the action potential duration, and may prolong the QTc interval. Data from some clinical PK/PD studies and drug interaction studies suggest that oral dosing with ketoconazole at 200 mg twice daily for 3–7 days can result in an increase of the QTc interval: a mean maximum increase of about 6 to 12 msec was seen at ketoconazole peak plasma concentrations about 1–4 hours after ketoconazole administration.

Activity In Vitro & In Vivo

NIZORAL® (ketoconazole) Tablets are indicated for the treatment of the following systemic fungal infections in patients who have failed or who are intolerant to other therapies: blastomycosis, coccidioidomycosis, histoplasmosis, chromomycosis, and paracoccidioidomycosis. NIZORAL® Tablets should not be used for fungal meningitis because it penetrates poorly into the cerebrospinal fluid.

Coadministration of a number of CYP3A4 substrates such as dofetilide, quinidine cisapride and pimozide is contraindicated with NIZORAL® Tablets. Coadministration with ketoconazole can cause elevated plasma concentrations of these drugs and may increase or prolong both therapeutic and adverse effects to such an extent that a potentially serious adverse reaction may occur. For example, increased plasma concentrations of some of these drugs can lead to QT prolongation and sometimes resulting in life-threatening ventricular tachyarrhythmias including occurrences of torsades de pointes, a potentially fatal arrhythmia. (See PRECAUTIONS: Drug Interactions.)

Concomitant administration of ergot alkaloids such as dihydroergotamine and ergotamine with NIZORAL® Tablets is contraindicated. (See PRECAUTIONS: Drug Interactions.)

The use of NIZORAL® Tablets is contraindicated in patients with acute or chronic liver disease.

NIZORAL® is contraindicated in patients who have shown hypersensitivity to the drug.

The hepatic injury has usually, but not always, been reversible upon discontinuation of NIZORAL® Tablets treatment. Cases of hepatitis have been reported in children.

At baseline, obtain laboratory tests (such as SGGT, alkaline phosphatase, ALT, AST, total bilirubin (TBL), Prothrombin Time (PT), International Normalization Ratio (INR), and testing for viral hepatitides). Patients should be advised against alcohol consumption while on treatment. If possible, use of other potentially hepatotoxic drugs should be avoided in patients receiving NIZORAL® Tablets.

Prompt recognition of liver injury is essential. During the course of treatment, serum ALT should be monitored weekly for the duration of treatment. If ALT values increase to a level above the upper limit of normal or 30 percent above baseline, or if the patient develops symptoms, ketoconazole treatment should be interrupted and a full set of liver tests should be obtained. Liver tests should be repeated to ensure normalization of values. Hepatotoxicity has been reported with restarting oral ketoconazole (rechallenge). If it is decided to restart oral ketoconazole, monitor the patient frequently to detect any recurring liver injury from the drug.

NIZORAL® Tablets decrease adrenal corticosteroid secretion at doses of 400 mg and higher. This effect is not shared with other azoles. The recommended dose of 200 mg – 400 mg daily should not be exceeded.

Ketoconazole has been used in high doses for the treatment of advanced prostate cancer and for Cushing's syndrome when other treatment options have failed. The safety and effectiveness of ketoconazole have not been established in these settings and the use of ketoconazole for these indications is not approved by FDA.

In a clinical trial involving 350 patients with metastatic prostatic cancer, eleven deaths were reported within two weeks of starting treatment with high doses of ketoconazole tablets (1200 mg/day). It is not possible to ascertain from the information available whether death was related to ketoconazole therapy or adrenal insufficiency in these patients with serious underlying disease.

Anaphylaxis has been reported after the first dose. Several cases of hypersensitivity reactions including urticaria have also been reported.

Patients should be instructed to report any signs and symptoms which may suggest liver dysfunction so that appropriate biochemical testing can be done. Such signs and symptoms may include unusual fatigue, anorexia, nausea and/or vomiting, abdominal pain, jaundice, dark urine or pale stools (see WARNINGS section).

Ketoconazole is mainly metabolized through CYP3A4. Other substances that either share this metabolic pathway or modify CYP3A4 activity may influence the pharmacokinetics of ketoconazole. Similarly, ketoconazole may modify the pharmacokinetics of other substances that share this metabolic pathway. Ketoconazole is a potent CYP3A4 inhibitor and a P-glycoprotein inhibitor. When using concomitant medication, the corresponding label should be consulted for information on the route of metabolism and the possible need to adjust dosages.

Interaction studies have only been performed in adults. The relevance of the results from these studies in pediatric patients is unknown.

Drugs that reduce the gastric acidity (e.g. acid neutralizing medicines such as aluminum hydroxide, or acid secretion suppressors such as H2-receptor antagonists and proton pump inhibitors) impair the absorption of ketoconazole from NIZORAL® Tablets. These drugs should be used with caution when coadministered with NIZORAL® Tablets:

Coadministration of NIZORAL® Tablets with potent enzyme inducers of CYP3A4 may decrease the bioavailability of ketoconazole to such an extent that efficacy may be reduced. Examples include:

Drugs that may have their plasma concentrations increased by ketoconazole

Ketoconazole can inhibit the metabolism of drugs metabolized by CYP3A4 and can inhibit the drug transport by P-glycoprotein, which may result in increased plasma concentrations of these drugs and/or their active metabolite(s) when they are administered with ketoconazole. These elevated plasma concentrations may increase or prolong both therapeutic and adverse effects of these drugs. CYP3A4-metabolized drugs known to prolong the QT interval may be contraindicated with NIZORAL® Tablets, since the combination may lead to ventricular tachyarrhythmias, including occurrences of torsade de pointes, a potentially fatal arrhythmia.

Examples of drugs that may have their plasma concentrations increased by ketoconazole presented by drug class with advice regarding coadministration with NIZORAL® Tablets:

Ketoconazole did not show any signs of mutagenic potential when evaluated using the dominant lethal mutation test or the Ames Salmonella microsomal activator assay. Ketoconazole was not carcinogenic in an 18-month, oral study in Swiss albino mice or a 24-month oral carcinogenicity study in Wistar rats at dose levels of 5, 20 and 80 mg/kg/day. The high dose in these studies was approximately 1× (mouse) or 2× (rat) the clinical dose in humans based on a mg/m2 comparison.

Ketoconazole has been shown to be teratogenic (syndactylia and oligodactylia) in the rat when given in the diet at 80 mg/kg/day (2 times the maximum recommended human dose, based on body surface area comparisons). However, these effects may be related to maternal toxicity, evidence of which also was seen at this and higher dose levels.

There are no adequate and well controlled studies in pregnant women. NIZORAL® Tablets should be used during pregnancy only if the potential benefit justifies the potential risk to the fetus.

Ketoconazole has also been found to be embryotoxic in the rat when given in the diet at doses higher than 80 mg/kg during the first trimester of gestation.

In addition, dystocia (difficult labor) was noted in rats administered oral ketoconazole during the third trimester of gestation. This occurred when ketoconazole was administered at doses higher than 10 mg/kg (about one fourth the maximum human dose, based on body surface area comparison).

Ketoconazole has been shown to be excreted in the milk. Mothers who are under treatment with NIZORAL® Tablets should not breast feed.

NIZORAL® Tablets have not been systematically studied in children of any age, and essentially no information is available on children under 2 years. NIZORAL® Tablets should not be used in pediatric patients unless the potential benefit outweighs the risks.

The following adverse reactions were reported in clinical trials:

The following adverse reactions have been identified during postapproval use of NIZORAL® Tablets. Because these reactions are reported voluntarily from a population of uncertain size, it is not always possible to reliably estimate their frequency or establish a causal relationship to drug exposure.

The following adverse reactions were reported during post-marketing experience:

Reproductive System and Breast Disorders: erectile dysfunction; with doses higher than the recommended therapeutic dose of 200 or 400mg daily, azoospermia.

In the event of acute accidental overdose, treatment consists of supportive and symptomatic measures. Within the first hour after ingestion, activated charcoal may be administered.

There should be laboratory as well as clinical documentation of infection prior to starting ketoconazole therapy. The usual duration of therapy for systemic infection is 6 months. Treatment should be continued until active fungal infection has subsided.

The recommended starting dose of NIZORAL® (ketoconazole) Tablets is a single daily administration of 200 mg (one tablet). If clinical responsiveness is insufficient within the expected time, the dose of NIZORAL® Tablets may be increased to 400 mg (two tablets) once daily.

NIZORAL® (ketoconazole) is available as white, scored tablets containing 200 mg of ketoconazole debossed "JANSSEN" and on the reverse side debossed "NIZORAL". They are supplied in bottles of 100 tablets (NDC 50458-220-10).

This Medication Guide has been approved by the U.S. Food and Drug Administration