Ativan (lorazepam), an antianxiety agent, has the chemical formula, 7-chloro-5-(o-chlorophenyl)-1,3-dihydro-3-hydroxy-2H-1,4-benzodiazepin-2-one: 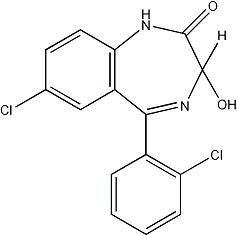 It is a nearly white powder almost insoluble in water. Each Ativan (lorazepam) tablet, to be taken orally, contains 0.5 mg, 1 mg, or 2 mg of lorazepam. The inactive ingredients present are lactose monohydrate, magnesium stearate, microcrystalline cellulose, and polacrilin potassium.

Studies in healthy volunteers show that in single high doses Ativan (lorazepam) has a tranquilizing action on the central nervous system with no appreciable effect on the respiratory or cardiovascular systems.

Ativan (lorazepam) is readily absorbed with an absolute bioavailability of 90 percent. Peak concentrations in plasma occur approximately 2 hours following administration. The peak plasma level of lorazepam from a 2 mg dose is approximately 20 ng/mL.

Studies comparing young and elderly subjects have shown that advancing age does not have a significant effect on the pharmacokinetics of lorazepam. However, in one study involving single intravenous doses of 1.5 to 3 mg of Ativan Injection, mean total body clearance of lorazepam decreased by 20% in 15 elderly subjects of 60 to 84 years of age compared to that in 15 younger subjects of 19 to 38 years of age.

Ativan (lorazepam) is indicated for the management of anxiety disorders or for the short-term relief of the symptoms of anxiety or anxiety associated with depressive symptoms. Anxiety or tension associated with the stress of everyday life usually does not require treatment with an anxiolytic.

The effectiveness of Ativan (lorazepam) in long-term use, that is, more than 4 months, has not been assessed by systematic clinical studies. The physician should periodically reassess the usefulness of the drug for the individual patient.

Ativan (lorazepam) is contraindicated in patients with
– hypersensitivity to benzodiazepines or to any components of the formulation.
– acute narrow-angle glaucoma.

Pre-existing depression may emerge or worsen during use of benzodiazepines including lorazepam. Ativan (lorazepam) is not recommended for use in patients with a primary depressive disorder or psychosis.

Use of benzodiazepines, including lorazepam, both used alone and in combination with other CNS depressants, may lead to potentially fatal respiratory depression. (See PRECAUTIONS Clinically Significant Drug Interactions)

As with all patients on CNS- depressant drugs, patients receiving lorazepam should be warned not to operate dangerous machinery or motor vehicles and that their tolerance for alcohol and other CNS depressants will be diminished.

In general, benzodiazepines should be prescribed for short periods only (e.g., 2 to 4 weeks). Extension of the treatment period should not take place without reevaluation of the need for continued therapy. Continuous long-term use of product is not recommended. Withdrawal symptoms (e.g., rebound insomnia) can appear following cessation of recommended doses after as little as one week of therapy. Abrupt discontinuation of product should be avoided and a gradual dosage-tapering schedule followed after extended therapy.

Safety and effectiveness of Ativan (lorazepam) in children of less than 12 years have not been established.

To assure the safe and effective use of Ativan (lorazepam), patients should be informed that, since benzodiazepines may produce psychological and physical dependence, it is advisable that they consult with their physician before either increasing the dose or abruptly discontinuing this drug.

Some patients on Ativan (lorazepam) have developed leukopenia, and some have had elevations of LDH. As with other benzodiazepines, periodic blood counts and liver-function tests are recommended for patients on long-term therapy.

Concurrent administration of lorazepam with probenecid may results in a more rapid onset or prolonged effect of lorazepam due to increased half-life and decreased total clearance. Lorazepam dosage needs to be reduced by approximately 50% when coadministered with probenecid.

No evidence of carcinogenic potential emerged in rats during an 18-month study with Ativan (lorazepam). No studies regarding mutagenesis have been performed.

Clinical studies of Ativan generally were not adequate to determine whether subjects aged 65 and over respond differently than younger subjects; however, the incidence of sedation and unsteadiness was observed to increase with age (see ADVERSE REACTIONS).

In a sample of about 3500 patients treated for anxiety, the most frequent adverse reaction to Ativan (lorazepam) was sedation (15.9%), followed by dizziness (6.9%), weakness (4.2%), and unsteadiness (3.4%). The incidence of sedation and unsteadiness increased with age.

Paradoxical reactions, including anxiety, excitation, agitation, hostility, aggression, rage, sleep disturbances/insomnia, sexual arousal, and hallucinations may occur. Small decreases in blood pressure and hypotension may occur but are usually not clinically significant, probably being related to the relief of anxiety produced by Ativan (lorazepam).

Overdosage of benzodiazepines is usually manifested by varying degrees of central nervous system depression ranging from drowsiness to coma. In mild cases, symptoms include drowsiness, mental confusion, paradoxical reactions, dysarthria and lethargy. In more serious cases, and especially when other drugs or alcohol were ingested, symptoms may include ataxia, hypotonia, hypotension, cardiovascular depression, respiratory depression, hypnotic state, coma, and, death.

Ativan (lorazepam) is administered orally. For optimal results, dose, frequency of administration, and duration of therapy should be individualized according to patient response. To facilitate this, 0.5 mg, 1 mg, and 2 mg tablets are available.

Ativan® (lorazepam) Tablets are available in the following dosage strengths:

Tablets made in Germany

Ativan® is a registered trademark of Biovail Laboratories International SRL.

CIV
SEALED
FOR YOUR
PROTECTION

SEALED
FOR YOUR
PROTECTION 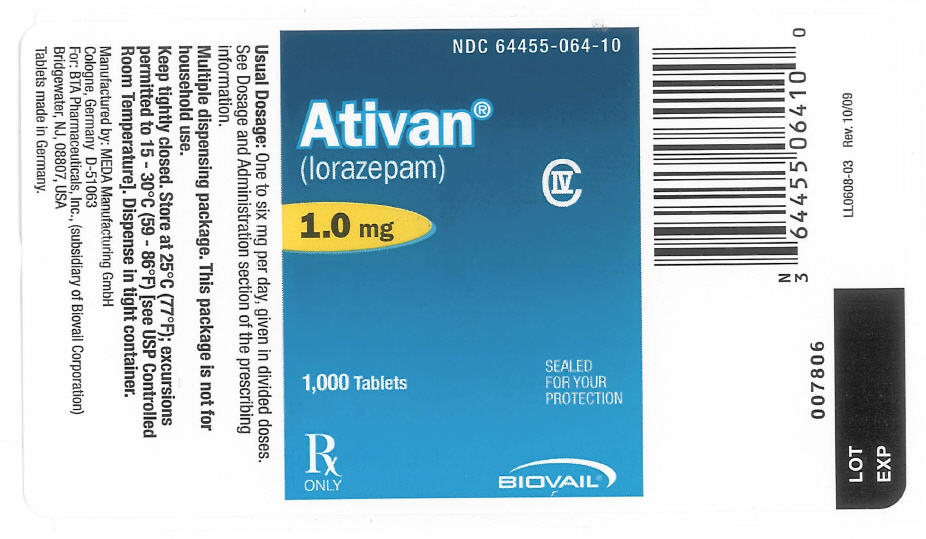 0.5 mg
SEALED
FOR YOUR
PROTECTION