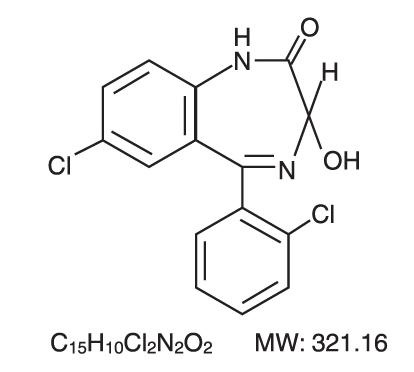 It is a nearly white powder almost insoluble in water. Each Lorazepam Tablet, to be taken orally, contains 0.5 mg, 1 mg, or 2 mg of lorazepam.  The inactive ingredients present are Lactose Anhydrous, Microcrystalline Cellulose, Polacrilin Potassium and Magnesium Stearate.

Studies comparing young and elderly subjects have shown that advancing age does not have a significant effect on the pharmacokinetics of lorazepam. However, in one study involving single intravenous doses of 1.5 to 3 mg of Lorazepam, mean total body clearance of lorazepam decreased by 20% in 15 elderly subjects of 60 to 84 years of age compared to that in 15 younger subjects 19 to 38 years of age.

In a sample of about 3500 patients treated for anxiety, the most frequent adverse reaction to lorazepam was sedation (15.9%), followed by dizziness (6.9%), weakness (4.2%), and unsteadiness (3.4%).  The incidence of sedation and unsteadiness increased with age.

General supportive and symptomatic measures are recommended; vital signs must be monitored and the patient closely observed. When there is a risk of aspiration, induction of emesis is not recommended. Gastric lavage may be indicated if performed soon after ingestion or in symptomatic patients. Administration of activated charcoal may also limit drug absorption.  Hypotension, though unlikely, usually may be controlled with norepinephrine bitartrate injection.  Lorazepam is poorly dialyzable. Lorazepam glucuronide, the inactive metabolite, may be highly dialyzable.