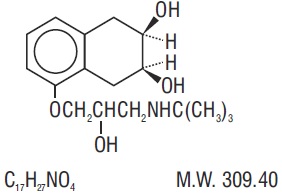 Nadolol, USP is a white to off-white, practically odorless, crystalline powder. It is freely soluble in alcohol and in methanol, soluble in water at pH 2, and slightly soluble in chloroform.

Nadolol specifically competes with beta-adrenergic receptor agonists for available beta-receptor sites; it inhibits both the beta1 receptors located chiefly in cardiac muscle and the beta2 receptors located chiefly in the bronchial and vascular musculature, inhibiting the chronotropic, inotropic, and vasodilator responses to beta-adrenergic stimulation proportionately. Nadolol has no intrinsic sympathomimetic activity and, unlike some other beta-adrenergic blocking agents, nadolol has little direct myocardial depressant activity and does not have an anesthetic-like membrane-stabilizing action. Animal and human studies show that nadolol slows the sinus rate and depresses AV conduction. In dogs, only minimal amounts of nadolol were detected in the brain relative to amounts in blood and other organs and tissues. Nadolol has low lipophilicity as determined by octanol/ water partition coefficient, a characteristic of certain beta-blocking agents that has been correlated with the limited extent to which these agents cross the blood-brain barrier, their low concentration in the brain, and low incidence of CNS-related side effects.

The mechanism of the antihypertensive effects of beta-adrenergic receptor blocking agents has not been established; however factors that may be involved include (1) competitive antagonism of catecholamines at peripheral (non-CNS) adrenergic neuron sites (especially cardiac) leading to decreased cardiac output, (2) a central effect leading to reduced tonic-sympathetic nerve outflow to the periphery, and (3) suppression of renin secretion by blockade of the beta-adrenergic receptors responsible for renin release from the kidneys.

Nadolol Tablets USP are indicated for the long-term management of patients with angina pectoris.

Nadolol Tablets USP are indicated for the treatment of hypertension, to lower blood pressure. Lowering blood pressure reduces the risk of fatal and nonfatal cardiovascular events, primarily strokes and myocardial infarctions. These benefits have been seen in controlled trials of antihypertensive drugs from a wide variety of pharmacologic classes including the class to which this drug principally belongs. There are no controlled trials demonstrating risk reduction with Nadolol Tablets USP.

Nadolol Tablets USP may be used alone or in combination with other antihypertensive agents, especially thiazide-type diuretics.

Bradycardia with heart rates of less than 60 beats per minute occurs commonly, and heart rates below 40 beats per minute and/ or symptomatic bradycardia were seen in about 2 of 100 patients. Symptoms of peripheral vascular insufficiency, usually of the Raynaud type, have occurred in approximately 2 of 100 patients. Cardiac failure, hypotension, and rhythm/conduction disturbances have each occurred in about 1 of 100 patients. Single instances of first degree and third degree heart block have been reported; intensification of AV block is a known effect of beta-blockers (see also CONTRAINDICATIONS, WARNINGS, and PRECAUTIONS).