APRISO capsules are indicated for the maintenance of remission of ulcerative colitis in patients 18 years of age and older.

The recommended dose for maintenance of remission of ulcerative colitis in adult patients is 1.5 g (four APRISO capsules) orally once daily in the morning. APRISO may be taken without regard to meals. APRISO should not be co-administered with antacids. An evaluation of renal function is recommended before initiating therapy with APRISO.

APRISO is contraindicated in patients with hypersensitivity to salicylates or aminosalicylates or to any of the components of APRISO capsules.

Renal impairment, including minimal change nephropathy, acute and chronic interstitial nephritis, and, rarely, renal failure, has been reported in patients given products such as APRISO that contain mesalamine or are converted to mesalamine.

It is recommended that patients have an evaluation of renal function prior to initiation of APRISO therapy and periodically while on therapy. Exercise caution when using APRISO in patients with known renal dysfunction or a history of renal disease.

In animal studies, the kidney was the principal organ for toxicity [see Nonclinical Toxicology (13.2)].

Mesalamine has been associated with an acute intolerance syndrome that may be difficult to distinguish from a flare of inflammatory bowel disease. Although the exact frequency of occurrence has not been determined, it has occurred in 3% of patients in controlled clinical trials of mesalamine or sulfasalazine. Symptoms include cramping, acute abdominal pain and bloody diarrhea, sometimes fever, headache, and rash. If acute intolerance syndrome is suspected, promptly discontinue treatment with APRISO.

Some patients who have experienced a hypersensitivity reaction to sulfasalazine may have a similar reaction to APRISO capsules or to other compounds that contain or are converted to mesalamine.

The data described below reflect exposure to APRISO in 557 patients, including 354 exposed for at least 6 months and 250 exposed for greater than one year. APRISO was studied in two placebo-controlled trials (n = 367 treated with APRISO) and in one open-label, long-term study (n = 190 additional patients). The population consisted of patients with ulcerative colitis; the mean age was 47 years, 54% were female, and 93% were white. Patients received doses of APRISO 1.5 g administered orally once per day for six months in the placebo-controlled trials and for up to 24 months in the open-label study.

The following adverse reactions, presented by body system, were reported at a frequency less than 3% in patients treated with APRISO for up to 24 months in controlled and open-label trials.

6.2 Adverse Reaction Information from Other Sources

The following adverse reactions have been identified during clinical trials of a product similar to APRISO and post approval use of other mesalamine-containing products such as APRISO.  Because many of these reactions are reported voluntarily from a population of unknown size, it is not always possible to reliably estimate their frequency or establish a causal relationship to drug exposure.

Based on in vitro studies, APRISO is not expected to inhibit the metabolism of drugs that are substrates of CYP1A2, CYP2C9, CYP2C19, CYP2D6, or CYP3A4.

Safety and effectiveness of APRISO capsules in pediatric patients have not been established.

Clinical studies of APRISO did not include sufficient numbers of subjects aged 65 and over to determine whether they respond differently than younger subjects.  Other reported clinical experience has not identified differences in responses between elderly and younger patients.  In general, the greater frequency of decreased hepatic, renal, or cardiac function, and of concomitant disease or other drug therapy in elderly patients should be considered when prescribing APRISO.

Reports from uncontrolled clinical studies and postmarketing reporting systems suggested a higher incidence of blood dyscrasias, i.e., neutropenia, pancytopenia, in patients who were 65 years or older who were taking mesalamine-containing products such as APRISO. Caution should be taken to closely monitor blood cell counts during mesalamine therapy.

Mesalamine is known to be substantially excreted by the kidney, and the risk of adverse reactions to this drug may be greater in patients with impaired renal function.  Because elderly patients are more likely to have decreased renal function, care should be taken when prescribing this drug therapy [see Warnings and Precautions (5.1)].

APRISO is an aminosalicylate, and symptoms of salicylate toxicity include hematemesis, tachypnea, hyperpnea, tinnitus, deafness, lethargy, seizures, confusion, or dyspnea. Severe intoxication may lead to electrolyte and blood pH imbalance and potentially to other organ (e.g., renal and liver) involvement.  There is no specific antidote for mesalamine overdose; however, conventional therapy for salicylate toxicity may be beneficial in the event of acute overdosage. This includes prevention of further gastrointestinal tract absorption by emesis and, if necessary, by gastric lavage. Fluid and electrolyte imbalance should be corrected by the administration of appropriate intravenous therapy. Adequate renal function should be maintained.  APRISO is a pH-dependent delayed-release product and this factor should be considered when treating a suspected overdose.

Each APRISO capsule is a delayed- and extended-release dosage form for oral administration. Each capsule contains 0.375 g of mesalamine USP (5-aminosalicylic acid, 5-ASA), an anti-inflammatory drug.   The structural formula of mesalamine is:

Each APRISO capsule contains granules composed of mesalamine in a polymer matrix with an enteric coating that dissolves at pH 6 and above.

The mechanism of action of mesalamine (5-ASA) is unknown, but appears to be local to the intestinal mucosa rather than systemic. Mucosal production of arachidonic acid metabolites, both through the cyclooxygenase pathways, i.e., prostanoids, and through the lipoxygenase pathways, i.e., leukotrienes and hydroxyeicosatetraenoic acids, is increased in patients with ulcerative colitis, and it is possible that 5-ASA diminishes inflammation by blocking production of arachidonic acid metabolites.

The pharmacokinetics of 5-ASA and its metabolite, N-acetyl-5-aminosalicylic acid (N-Ac-5-ASA), were studied after a single and multiple oral doses of 1.5 g APRISO in a crossover study in healthy subjects under fasting conditions.  In the multiple-dose period, each subject received APRISO 1.5 g (4 x 0.375 g capsules) every 24 hours (QD) for 7 consecutive days.  Steady state was reached on Day 6 of QD dosing based on trough concentrations.

After single and multiple doses of APRISO, peak plasma concentrations were observed at about 4 hours post dose.  At steady state, moderate increases (1.5-fold and 1.7-fold) in systemic exposure (AUC0-24) to 5-ASA and N-Ac-5-ASA were observed when compared with a single-dose of APRISO.

Pharmacokinetic parameters after a single dose of 1.5 g APRISO and at steady state in healthy subjects under fasting condition are shown in Table 2.

In a separate study (n = 30), it was observed that under fasting conditions about 32% ± 11% (mean ± SD) of the administered dose was systemically absorbed based on the combined cumulative urinary excretion of 5-ASA and N-Ac-5-ASA over 96 hours post-dose.

In an in vitro study, at 2.5 μg/mL, mesalamine and N-Ac-5-ASA are 43 ± 6% and 78 ± 1% bound, respectively, to plasma proteins. Protein binding of N-Ac-5-ASA does not appear to be concentration dependent at concentrations ranging from 1 to 10 μg/mL.

The major metabolite of mesalamine is N-acetyl-5-aminosalicylic acid (N-Ac-5-ASA). It is formed by N-acetyltransferase activity in the liver and intestinal mucosa.

In an in vitro study using human liver microsomes, 5-ASA and its metabolite, N-Ac-5-ASA, were shown not to inhibit the major CYP enzymes evaluated (CYP1A2, CYP2C9, CYP2C19, CYP2D6, and CYP3A4). Therefore, mesalamine and its metabolite are not expected to inhibit the metabolism of other drugs that are substrates of CYP1A2, CYP2C9, CYP2C19, CYP2D6, or CYP3A4.

Dietary mesalamine was not carcinogenic in rats at doses as high as 480 mg/kg/day, or in mice at 2000 mg/kg/day.  These doses are about 2.6 and 5.4 times the recommended human dose of granulated mesalamine capsules of 1.5 g/day (30 mg/kg if 50 kg body weight assumed or 1110 mg/m2), respectively, based on body surface area.  Mesalamine was negative in the Ames test, the mouse lymphoma cell (L5178Y/TK+/-) forward mutation test, the sister chromatid exchange assay in the Chinese hamster bone marrow test, and the mouse bone marrow micronucleus test.  Mesalamine at oral doses up to 320 mg/kg (about 1.7 times the recommended human dose based on body surface area) was found to have no effect on fertility or reproductive performance in rats.

Two similar, randomized, double-blind, placebo-controlled, multi-center studies were conducted in a total of 562 adult patients in remission from ulcerative colitis. The study populations had a mean age of 46 years (11% age 65 years or older), were 53% female, and were primarily white (92%).

Ulcerative colitis disease activity was assessed using a modified Sutherland Disease Activity Index1 (DAI), which is a sum of four subscores based on stool frequency, rectal bleeding, mucosal appearance on endoscopy, and physician’s rating of disease activity.  Each subscore can range from 0 to 3, for a total possible DAI score of 12.

At baseline, approximately 80% of patients had a total DAI score of 0 or 1.0.  Patients were randomized 2:1 to receive either APRISO 1.5 g or placebo once daily in the morning for six months. Patients were assessed at baseline, 1 month, 3 months, and 6 months in the clinic, with endoscopy performed at baseline, at end of study, or if clinical symptoms developed. Relapse was defined as a rectal bleeding subscale score of 1 or more and a mucosal appearance subscale score of 2 or more using the DAI. The analysis of the intent-to-treat population was a comparison of the proportions of patients who remained relapse-free at the end of six months of treatment. For the table below (Table 3) all patients who prematurely withdrew from the study for any reason were counted as relapses.

In both studies, the proportion of patients who remained relapse-free at six months was greater for APRISO than for placebo.

Examination of gender subgroups did not identify difference in response to APRISO among these subgroups. There were too few elderly and too few African-American patients to adequately assess difference in effects in those populations.

The use of APRISO for treating ulcerative colitis beyond six months has not been evaluated in controlled clinical trials.

APRISO is available as light blue opaque hard gelatin capsules containing 0.375 g mesalamine and with the letters “G” and “M” on either side of a black band imprinted on the capsule.

Apriso is a trademark of Valeant Pharmaceuticals International, Inc., or its affiliates. 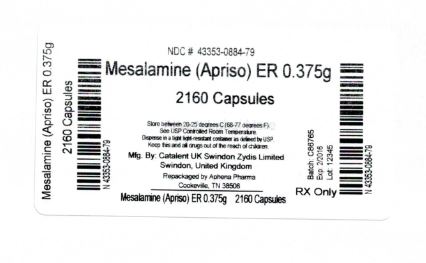