•
Relief of the inflammatory and pruritic manifestations of corticosteroid-responsive dermatoses in adults.
•
The topical treatment of mild to moderate atopic dermatitis in pediatric patients 3 months to 18 years of age.

For corticosteroid-responsive dermatoses in adults, apply a thin layer to the affected skin areas 2 or 3 times daily, depending on the severity of the condition, and rub in gently.

For atopic dermatitis in patients 3 months to 18 years of age, apply a thin layer to the affected skin areas 2 times daily and rub in gently. Do not apply Locoid Lipocream in the diaper area unless directed by a physician.

Discontinue therapy when control is achieved. If no improvement is seen within 2 weeks, reassessment of the diagnosis may be necessary. Before prescribing for more than 2 weeks, any additional benefits of extending treatment to 4 weeks should be weighed against the risk of HPA-axis suppression and local adverse events. The safety and efficacy of Locoid Lipocream has not been established beyond 4 weeks of use [see Warnings and Precautions (5.1)].

Locoid Lipocream is not for oral, ophthalmic, or intravaginal use.

Studies conducted in pediatric subjects demonstrated reversible HPA-axis suppression after use of Locoid Lipocream. Pediatric patients may be more susceptible than adults to systemic toxicity from equivalent doses of Locoid Lipocream due to their larger skin-surface-to-body-mass ratios [see Use in Specific Populations (8.4)].

Patients applying a topical corticosteroid to a large surface area or to areas under occlusion should be considered for periodic evaluation of the HPA axis. This may be done by using cosyntropin (ACTH1-24) stimulation testing (CST).

If HPA-axis suppression is noted, the frequency of application should be reduced or the drug should be withdrawn, or a less potent corticosteroid should be substituted. Signs and symptoms of glucocorticosteroid insufficiency may occur, requiring supplemental systemic corticosteroids [see Adverse Reactions (6)].

If skin infections are present or develop, an appropriate antifungal, antibacterial or antiviral agent should be used. If a favorable response does not occur promptly, use of Locoid Lipocream should be discontinued until the infection has been adequately controlled [see Adverse Reactions (6)].

Allergic contact dermatitis with corticosteroids is usually diagnosed by observing a failure to heal rather than noticing a clinical exacerbation. Such an observation should be corroborated with appropriate patch testing. Discontinue Locoid Lipocream if the diagnosis is established [see Adverse Reactions (6)].

The following adverse reactions are discussed in greater detail in other sections of the labeling:

The following additional local adverse reactions have been reported infrequently with topical corticosteroids but may occur more frequently with the use of occlusive dressings. These reactions are listed in an approximate decreasing order of occurrence: burning, itching, drying, hypertrichosis, acneiform eruptions, hypopigmentation, perioral dermatitis, allergic contact dermatitis, maceration of the skin, secondary infection, skin atrophy, striae, and miliaria.

There are no adequate and well-controlled studies in pregnant women. Therefore, Locoid Lipocream should be used during pregnancy only if the potential benefit justifies the potential risk to the fetus.

Systemic embryofetal development studies were conducted in rats and rabbits. Subcutaneous doses of 0.6, 1.8, and 5.4 mg/kg/day hydrocortisone butyrate were administered to pregnant female rats during gestation days 6 - 17. In the presence of maternal toxicity, fetal effects noted at 5.4 mg/kg/day (2X MTHD) included an increased incidence of ossification variations and unossified sternebra. No treatment-related effects on embryofetal toxicity or teratogenicity were noted at doses of 5.4 and 1.8 mg/kg/day, respectively (2X MTHD and 0.7X MTHD, respectively).

Subcutaneous doses of 0.1, 0.2, and 0.3 mg/kg/day hydrocortisone butyrate were administered to pregnant female rabbits during gestation days 7 - 20. An increased incidence of abortion was noted at 0.3 mg/kg/day (0.2X MTHD). In the absence of maternal toxicity, a dose-dependent decrease in fetal body weight was noted at doses ≥0.1 mg/kg/day (0.1X MTHD). Additional indicators of embryofetal toxicity (reduction in litter size, decreased number of viable fetuses, increased post-implantation loss) were noted at doses ≥0.2 mg/kg/day (0.2X MTHD). Additional fetal effects noted in this study included delayed ossification noted at doses ≥0.1 mg/kg/day and an increased incidence of fetal malformations (primarily skeletal malformations) noted at doses ≥0.2 mg/kg/day. A dose at which no treatment-related effects on embryofetal toxicity or teratogenicity were observed was not established in this study.

Additional systemic embryofetal development studies were conducted in rats and mice. Subcutaneous doses of 0.1 and 9 mg/kg/day hydrocortisone butyrate were administered to pregnant female rats during gestation days 9 – 15. In the presence of maternal toxicity, an increase in fetal deaths and fetal resorptions and an increase in the number of ossifications in caudal vertebrae were noted at a dose of 9 mg/kg/day (3X MTHD). No treatment-related effects on embryofetal toxicity or teratogenicity were noted at 0.1 mg/kg/day (0.1X MTHD).

Subcutaneous doses of 0.2 and 1 mg/kg/day hydrocortisone butyrate were administered to pregnant female mice during gestation days 7 – 13.  In the absence of maternal toxicity, an increased number of cervical ribs and one fetus with clubbed legs were noted at a dose of 1 mg/kg/day (0.2X MTHD).  No treatment-related effects on embryofetal toxicity or teratogenicity were noted at doses of 1 and 0.2 mg/kg/day, respectively (0.2X MTHD and 0.1X MTHD, respectively).

Safety and efficacy in pediatric patients below 3 months of age have not been established.

Because of higher skin-surface-to-body-mass ratios, pediatric patients are at a greater risk than adults of HPA-axis suppression when they are treated with topical corticosteroids [see Warnings and Precautions (5.1)]. They are therefore also at a greater risk of glucocorticosteroid insufficiency after withdrawal of treatment and of Cushing’s syndrome while on treatment.

Eighty-six (86) pediatric subjects (between 5 months and 18 years of age) with moderate to severe atopic dermatitis affecting at least 25% of body surface area (BSA) treated with Locoid Lipocream 3 times daily for up to 4 weeks were assessed for HPA-axis suppression in two separate studies. The disease severity (moderate to severe atopic dermatitis) and the dosing regimen (3 times daily) in these HPA-axis studies were different from the subject population (mild to moderate atopic dermatitis) and the dosing regimen (2 times daily) for which Locoid Lipocream is indicated in this population. Five of the 82 evaluable subjects (6.1%) demonstrated evidence of suppression, where the criterion for defining HPA-axis suppression was a serum cortisol level of ≤18 mcg/dL after cosyntropin stimulation. Suppressed subjects ranged in age from 5 months to 16 years and, at the time of enrollment, had 25% to 95% BSA involvement. These subjects did not demonstrate any clinical signs or symptoms despite evidence of HPA-axis suppression. At the first follow-up visit, approximately 1 month after the conclusion of treatment, cosyntropin stimulation results of all subjects had returned to normal, with the exception of one subject. This last subject recovered adrenal function by 65 days post-treatment.

Clinical studies of Locoid Lipocream did not include sufficient numbers of subjects aged 65 and over to determine whether they respond differently from younger subjects. 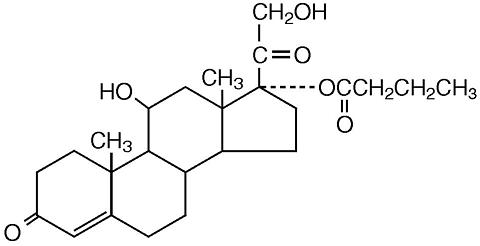 Hydrocortisone butyrate is a white to off-white powder with a molecular weight of 432.56, and a molecular formula of C25H36O6. It is practically insoluble in water, slightly soluble in ether, soluble in methanol, in alcohol, and in acetone, and freely soluble in chloroform.

Topical corticosteroids share anti-inflammatory, antipruritic, and vasoconstrictive properties. The mechanism of the anti-inflammatory activity of the topical corticosteroids is unclear. However, corticosteroids are thought to act by the induction of phospholipase A2 inhibitory proteins, collectively called lipocortins. It is postulated that these proteins control the biosynthesis of potent mediators of inflammation such as prostaglandins and leukotrienes by inhibiting the release of their common precursor, arachidonic acid. Arachidonic acid is released from membrane phospholipids by phospholipase A2.

The extent of percutaneous absorption of topical corticosteroids is determined by many factors, including the vehicle, the integrity of the epidermal barrier, and the use of occlusive dressings.

Topical corticosteroids can be absorbed through normal intact skin. Inflammation and/or other disease processes in the skin, occlusive dressings, or widespread application may increase percutaneous absorption and increase the risk of HPA-axis suppression.

Hydrocortisone butyrate revealed no evidence of mutagenic or clastogenic potential based on the results of two in vitro genotoxicity tests (Ames test and L5178Y/TK+/- mouse lymphoma assay) and one in vivo genotoxicity test (mouse micronucleus assay).

No evidence of impairment of fertility or effect on mating performance was observed in a fertility and general reproductive performance study conducted in male and female rats at subcutaneous doses up to and including 1.8 mg/kg/day (0.7X MTHD). Mild effects on maternal animals, such as reduced food consumption and a subsequent reduction in body weight gain, were seen at doses ≥0.6 mg/kg/day (0.2X MTHD).

In a multicenter, randomized, vehicle-controlled trial of 264 pediatric subjects 3 months to 18 years of age with mild to moderate atopic dermatitis, Locoid Lipocream or vehicle was applied twice daily for up to 4 weeks. Treatment success was assessed at Day 29 (after 28 days of treatment) and was defined as the proportion of patients who achieved both “clear” or “almost clear” and at least a 2-grade improvement from baseline on a 5-point Physician’s Global Assessment (PGA) scale. Study results are shown in Table 2.

Advise patients of the following:

Rx only
For topical use only
Net Wt. 45 g 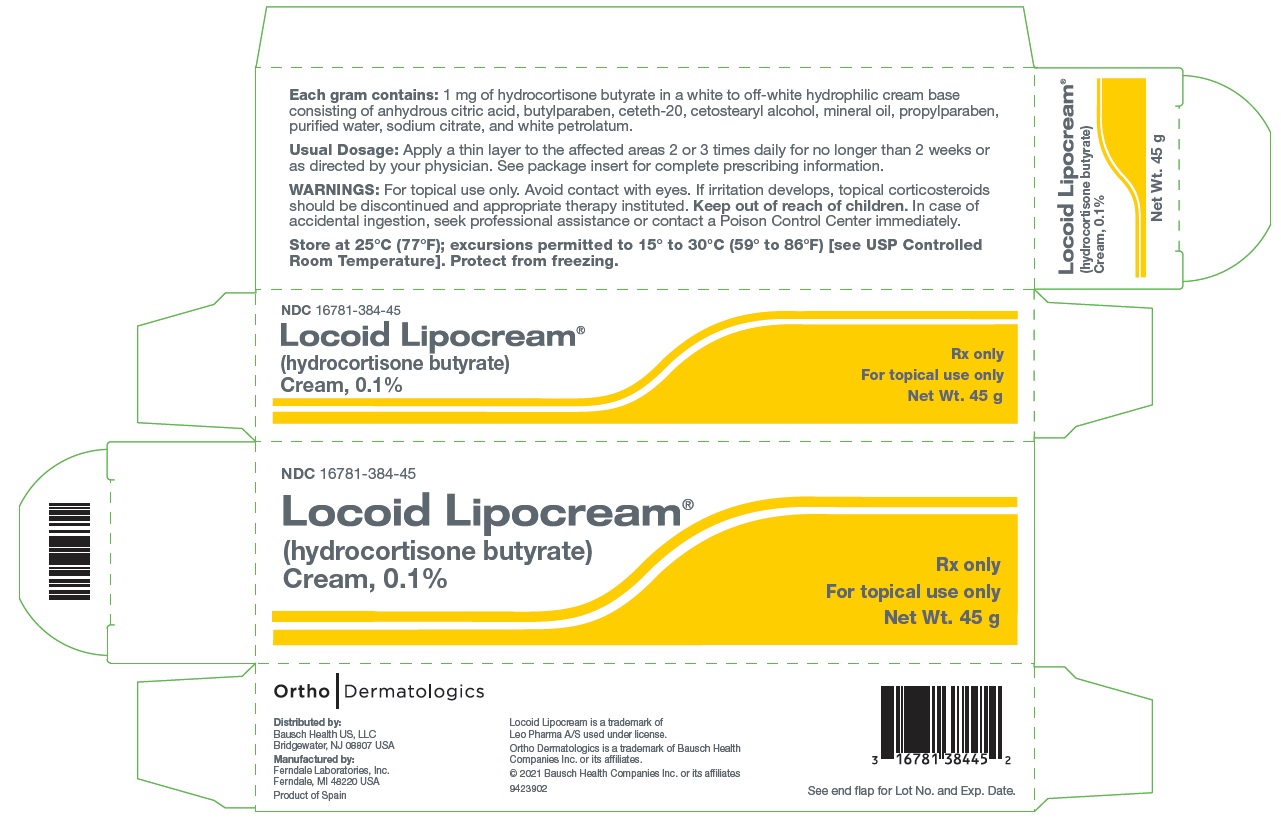