The action of HCG is virtually identical to that of pituitary LH, although HCG appears to have a small degree of FSH activity as well.  It stimulates production of gonadal steroid hormones by stimulating the interstitial cells (Leydig cells) of the testis to produce androgens and the corpus luteum of the ovary to produce progesterone.  Androgen stimulation in the male leads to the development of secondary sex characteristics and may stimulate testicular descent when no anatomical impediment to descent is present. This descent is usually reversible when HCG is discontinued. During the normal menstrual cycle, LH participates with FSH in the development and maturation of the normal ovarian follicle, and the mid-cycle LH surge triggers ovulation. HCG can substitute for LH in this function.  During a normal pregnancy, HCG secreted by the placenta maintains the corpus luteum after LH secretion decreases, supporting continued secretion of estrogen and progesterone and preventing menstruation.  HCG HAS NO KNOWN EFFECT ON FAT MOBILIZATION, APPETITE OR SENSE OF HUNGER, OR BODY FAT DISTRIBUTION.

HCG HAS NOT BEEN DEMONSTRATED TO BE EFFECTIVE ADJUNCTIVE THERAPY IN THE TREATMENT OF OBESITY.  THERE IS NO SUBSTANTIAL EVIDENCE THAT IT INCREASES WEIGHT LOSS BEYOND THAT RESULTING FROM CALORIC RESTRICTION, THAT IT CAUSES A MORE ATTRACTIVE OR ‘‘NORMAL’’ DISTRIBUTION OF FAT, OR THAT IT DECREASES THE HUNGER AND DISCOMFORT ASSOCIATED WITH CALORIE-RESTRICTED DIETS.

Precocious puberty, prostatic carcinoma or other androgen-dependent neoplasm, prior allergic reaction to HCG.

HCG should be used in conjunction with human menopausal gonadotropins only by physicians experienced with infertility problems who are familiar with the criteria for patient selection, contraindications, warnings, precautions and adverse reactions described in the package insert for menotropins.  The principal serious adverse reactions are: (1) Ovarian hyperstimulation, a syndrome of sudden ovarian enlargement, ascites with or without pain and/or pleural effusion, (2) Rupture of ovarian cysts with resultant hemoperitoneum, (3) Multiple births and (4) Arterial thromboembolism.

Anaphylaxis and other hypersensitivity reactions have been reported with urinary-derived HCG products.

Since androgens may cause fluid retention, HCG should be used with caution in patients with cardiac or renal disease, epilepsy, migraine or asthma.

Long-term studies in animals have not been performed to evaluate the carcinogenic or mutagenic potential of chorionic gonadotropin.

Safety and effectiveness of chorionic gonadotropin in children below the age of four have not been established.

The dosage regimen employed in any particular case will depend upon the indication for use, the age and weight of the patient and the physician’s preference.  The following regimens have been advocated by various authorities.

Prepubertal Cryptorchidism Not Due To Anatomical Obstruction

Induction of ovulation and pregnancy in the anovulatory, infertile woman in whom the cause of anovulation is secondary and not due to primary ovarian failure and who has been appropriately pretreated with human menotropins (see prescribing information for menotropins for dosage and administration for that drug product).  5,000 to 10,000 USP units one day following the last dose of menotropins.  (A dosage of 10,000 units is recommended in the labeling for menotropins.)

Chorionic Gonadotropin for Injection, USP, lyophilized, is supplied in two-vial packages including Bacteriostatic Water for Injection as diluent as follows:

The product is assayed in accord with the USP method and potencies refer to USP units (International Units) defined in terms of the USP Chorionic Gonadotropin Reference Standard.

For intramuscular use only.
Multiple Dose Vial 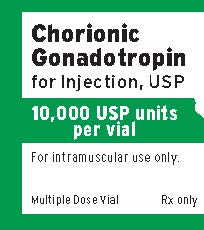 NOT FOR USE IN NEWBORNS. 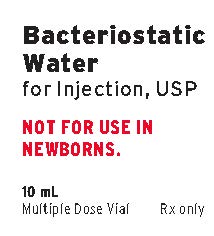 10,000 USP units per vial
For intramuscular use only.

With Bacteriostatic Water for injection, USP as diluent 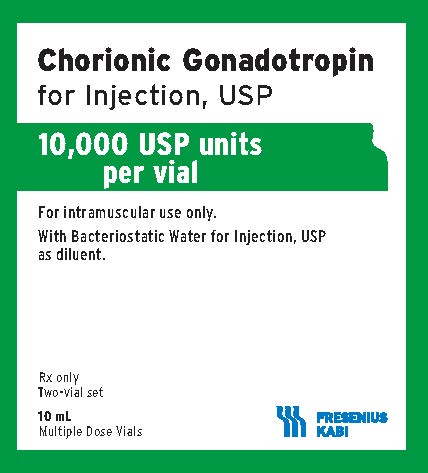