Inspect visually for particulate matter and discoloration prior to administration, whenever solution and container permit. Do not use if the solution is colored or cloudy, or if it contains particulate matter. Discard all unused drug.

Dilute 10 mL (1 mg) of epinephrine from the syringe in 1,000 mL of 5 percent dextrose solution or 5 percent dextrose and sodium chloride solution to produce a 1 mcg per mL dilution. The diluted solutions can be stored for up to 4 hours at room temperature or 24 hours under refrigerated conditions.

Administration in saline solution alone is not recommended. If indicated, administer whole blood or plasma separately.

Whenever possible, give infusions of epinephrine into a large vein. Avoid using a catheter tie-in technique, because the obstruction to blood flow around the tubing may cause stasis and increased local concentration of the drug. Avoid the veins of the leg in elderly patients or in those suffering from occlusive vascular diseases.

To provide hemodynamic support in septic shock associated hypotension in adult patients, the suggested dosing infusion rate of intravenously administered epinephrine is 0.05 mcg/kg/min to 2 mcg/kg/min, and is titrated to achieve a desired mean arterial pressure (MAP). The dosage may be adjusted periodically, such as every 10 – 15 minutes, in increments of 0.05 mcg/kg/min to 0.2 mcg/kg/min, to achieve the desired blood pressure goal.

After hemodynamic stabilization, wean incrementally over time, such as by decreasing doses of epinephrine every 30 minutes over a 12- to 24-hour period.

Injection solution: 10 mL clear glass vial containing 1 mg/10 mL (0.1 mg/mL) epinephrine in a sterile, nonpyrogenic, clear and colorless solution. Each vial is co-packaged with an injector, which together make a single-dose ABBOJECT® Syringe.

Patients receiving monoamine oxidase inhibitors (MAOI) or antidepressants of the triptyline or imipramine types may experience severe, prolonged hypertension when given epinephrine.

Avoid extravasation of epinephrine into the tissues, to prevent local necrosis. When Epinephrine Injection is administered intravenously, check the infusion site frequently for free flow. Blanching along the course of the infused vein, sometimes without obvious extravasation, may be attributed to vasa vasorum constriction with increased permeability of the vein wall, permitting some leakage. This also may progress on rare occasions to a superficial slough. Hence, if blanching occurs, consider changing the infusion site at intervals to allow the effects of local vasoconstriction to subside.

There is potential for gangrene in a lower extremity when infusions of catecholamine are given in an ankle vein.

Antidote for Extravasation Ischemia: To prevent sloughing and necrosis in areas in which extravasation has taken place, infiltrate the area with 10 mL to 15 mL of saline solution containing from 5 mg to 10 mg of phentolamine, an adrenergic blocking agent. Use a syringe with a fine hypodermic needle, with the solution being infiltrated liberally throughout the area, which is easily identified by its cold, hard, and pallid appearance. Sympathetic blockade with phentolamine causes immediate and conspicuous local hyperemic changes if the area is infiltrated within 12 hours.

Epinephrine constricts renal blood vessels, which may result in oliguria or renal impairment.

Epinephrine Injection contains sodium metabisulfite which may cause mild to severe allergic reactions including anaphylaxis or asthmatic episodes, particularly in patients with a history of allergies. The presence of sodium metabisulfite in this product should not preclude its use for the treatment of hypotension associated with septic shock even if the patient is sulfite-sensitive, as the alternatives to using epinephrine in a life-threatening situation may not be satisfactory. In susceptible patients, consider using a formulation of epinephrine or another vasoconstrictor that does not contain sodium metabisulfite.

The following adverse reactions are discussed elsewhere in labeling:

The following adverse reactions have been associated with use of epinephrine. Because these reactions are reported voluntarily from a population of uncertain size, it is not always possible to estimate their frequency reliably or to establish a causal relationship to drug exposure.

Patients who are concomitantly receiving any of the following drugs should be observed carefully for the development of cardiac arrhythmias [see Warnings and Precautions (5.5) and Adverse Reactions (6)].

•
β-blockers, such as propranolol
•
Cyclopropane or halogenated hydrocarbon anesthetics, such as halothane
•
Antihistamines
•
Thyroid hormones
•
Diuretics
•
Cardiac glycosides, such as digitalis glycosides
•
Quinidine

Limited published data on epinephrine use in pregnant women are not sufficient to determine a drug-associated risk for major birth defects or miscarriage. However, there are risks to the mother and fetus associated with epinephrine use during labor or delivery, and risks due to untreated hypotension associated with septic shock (see Clinical Considerations). In animal reproduction studies, epinephrine demonstrated adverse developmental effects when administered to pregnant rabbits (gastroschisis), mice (teratogenic effects, embryonic lethality, and delayed skeletal ossification), and hamsters (embryonic lethality and delayed skeletal ossification) during organogenesis at doses approximately 15 times, 3 times and 2 times, respectively, the maximum recommended daily intramuscular or subcutaneous dose (see Data).

Epinephrine usually inhibits spontaneous or oxytocin induced contractions of the pregnant human uterus and may delay the second stage of labor. Avoid epinephrine during the second stage of labor. In dosage sufficient to reduce uterine contractions, the drug may cause a prolonged period of uterine atony with hemorrhage. Avoid epinephrine in obstetrics when maternal blood pressure exceeds 130/80 mmHg.

In a study in pregnant rabbits administered 1.2 mg/kg/day epinephrine (approximately 15 times the maximum recommended intramuscular or subcutaneous dose on a mg/m2 basis) subcutaneously during organogenesis (on days 3 to 5, 6 to 7 or 7 to 9 of gestation), epinephrine caused teratogenic effects (including gastroschisis). Animals treated on days 6 to 7 had decreased number of implantations.

Subcutaneous administration of epinephrine to pregnant hamsters at a dose of 0.5 mg/kg/day (approximately 2 times the maximum recommended intramuscular or subcutaneous dose on a mg/m2 basis) on Gestation Days 7 to 10 resulted in delayed skeletal ossification and a reduction in litter size.

Clinical studies of epinephrine for the treatment of hypotension associated with septic shock did not include sufficient numbers of subjects aged 65 and over to determine whether they respond differently from younger subjects. Other reported clinical experience has not identified differences in responses between the elderly and younger patients. In general, dose selection for an elderly patient should be cautious, usually starting at the low end of the dosing range, reflecting the greater frequency of decreased hepatic, renal, or cardiac function, and of concomitant disease or other drug therapy.

Overdosage of epinephrine may produce extremely elevated arterial pressure, which may result in cerebrovascular hemorrhage, particularly in elderly patients. Overdosage may also result in pulmonary edema because of peripheral vascular constriction together with cardiac stimulation. Epinephrine overdosage may also cause transient bradycardia followed by tachycardia and these may be accompanied by potentially fatal cardiac arrhythmias. Premature ventricular contractions may appear within one minute after injection and may be followed by multifocal ventricular tachycardia (prefibrillation rhythm). Subsidence of the ventricular effects may be followed by atrial tachycardia and occasionally by atrioventricular block. Myocardial ischemia and infarction, cardiomyopathy, extreme pallor and coldness of the skin, metabolic acidosis due to elevated blood lactic acid levels, and renal insufficiency and failure have also been reported.

This sterile solution is to be administered after dilution by the intravenous route. Epinephrine is a sympathomimetic catecholamine (adrenergic agent) designated chemically as 4-[1-hydroxy-2 (methylamino) ethyl]-1,2 benzenediol, a white, crystalline powder. It has the following structural formula:

The molecular weight of epinephrine is 183.2.

Epinephrine solution deteriorates rapidly on exposure to air or light, turning pink from oxidation to adrenochrome and brown from the formation of melanin.

Epinephrine acts on both alpha (α)- and beta (β)-adrenergic receptors. The mechanism of the rise in blood pressure is 3-fold: a direct myocardial stimulation that increases the strength of ventricular contraction (positive inotropic action), an increased heart rate (positive chronotropic action), and peripheral vasoconstriction.

When administered parenterally epinephrine has a rapid onset and short duration of action.

Epinephrine is extensively metabolized with only a small amount excreted unchanged. Epinephrine is rapidly degraded to vanillylmandelic acid, an inactive metabolite, by monoamine oxidase and catechol-O-methyltransferase that are abundantly expressed in the liver, kidneys and other extraneuronal tissues. The tissues with the highest contribution to removal of circulating exogenous epinephrine are the liver (32%), kidneys (25%), skeletal muscle (20%), and mesenteric organs (12%).

In a pharmacokinetic study of 45-minute epinephrine infusions given to healthy men aged 20 to 25 years and healthy men aged 60 to 65 years, the mean plasma metabolic clearance rate of epinephrine at steady state was greater among the older men (144.8 versus 78 mL/kg/min for a 14.3 ng/kg/min infusion).

Body weight has been found to influence epinephrine pharmacokinetics. Higher body weight was associated with a higher plasma epinephrine clearance and a lower concentration plateau.

Long-term studies to evaluate the carcinogenic potential of epinephrine have not been conducted.

The potential for epinephrine to impair reproductive performance has not been evaluated, but epinephrine has been shown to decrease implantation in female rabbits dosed subcutaneously with 1.2 mg/kg/day (15-fold the highest human intramuscular or subcutaneous daily dose) during gestation days 3 to 9.

Epinephrine was associated with metabolic effects, decreased mesentery, coronary and renal conductance in a sheep model of septic shock. Data from hemolysis study have shown that epinephrine at 1:1000 dilution is non-hemolytic. Epinephrine infusion significantly increased the MAP (69 vs. 86 mmHg) and cardiac output (6.4 vs. 7.1 L/min) and decreased renal blood flow (330 vs. 247 mL/min).

Fourteen clinical studies from the literature documented that epinephrine increases the mean arterial pressure (MAP) in patients with hypotension associated with septic shock.

Epinephrine Injection 1 mg/10 mL (0.1 mg/mL) is a clear and colorless solution available in glass vials. Each vial is co-packaged with an injector, which together make a single-dose ABBOJECT® Syringe. It is supplied in the following presentation.

Epinephrine is light sensitive. Protect from light until ready to use.

Do not refrigerate. Protect from freezing.

Protect from alkalis and oxidizing agents.

ABBOJECT® is a trademark of Abbott Laboratories. 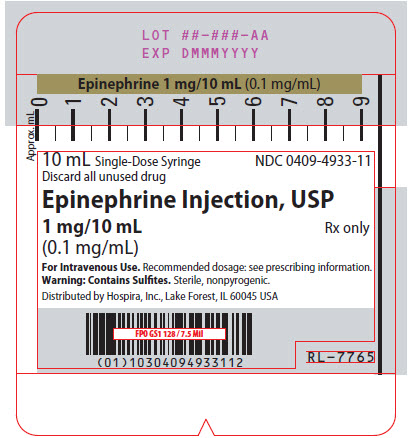 For Intravenous Use
Warning: Contains Sulfites
Protect from light

◀ PRESS AND PULL TO OPEN 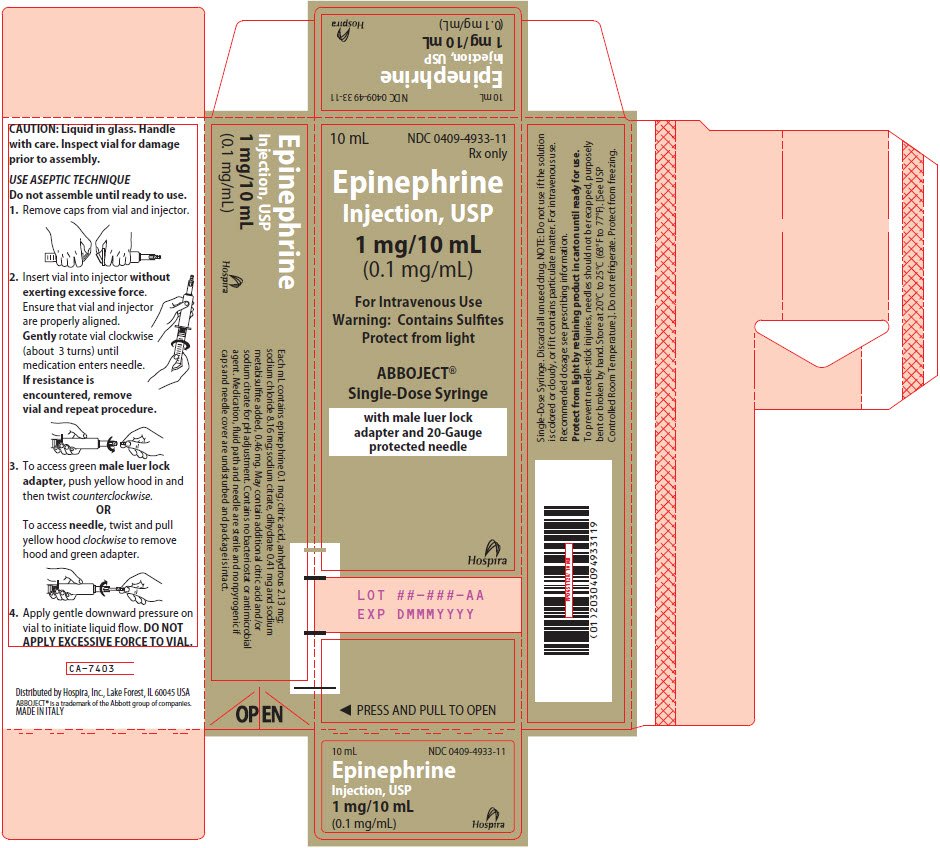