Megestrol Acetate Oral Suspension, USP contains megestrol acetate, a synthetic derivative of the steroid hormone, progesterone. Megestrol acetate is a white, crystalline solid chemically designated as 17α-(acetyloxy)-6-methylpregna-4,6-diene-3,20-dione. Solubility at 37°C in water is 2 µg per mL, solubility in plasma is 24 µg per mL. Its molecular weight is 384.51. The empirical formula is C24H32O4 and the structural formula is represented as follows: 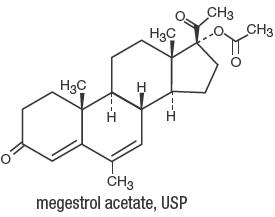 Plasma steady-state pharmacokinetics of megestrol acetate were evaluated in 10 adult, cachectic male patients with acquired immunodeficiency syndrome (AIDS) and an involuntary weight loss greater than 10% of baseline. Patients received single oral doses of 800 mg/day of Megestrol Acetate Oral Suspension, USP for 21 days. Plasma concentration data obtained on day 21 were evaluated for up to 48 hours past the last dose.

The effect of food on the bioavailability of Megestrol Acetate Oral Suspension, USP has not been evaluated.

The clinical efficacy of Megestrol Acetate Oral Suspension, USP was assessed in two clinical trials. One was a multicenter, randomized, double-blind, placebo-controlled study comparing megestrol acetate (MA) at doses of 100 mg, 400 mg, and 800 mg per day versus placebo in AIDS patients with anorexia/cachexia and significant weight loss. Of the 270 patients entered on study, 195 met all inclusion/exclusion criteria, had at least two additional post baseline weight measurements over a 12-week period, or had one post baseline weight measurement but dropped out for therapeutic failure. The percent of patients gaining five or more pounds at maximum weight gain in 12 study weeks was statistically significantly greater for the 800 mg (64%) and 400 mg (57%) MA-treated groups than for the placebo group (24%). Mean weight increased from baseline to last evaluation in 12 study weeks in the 800 mg MA-treated group by 7.8 pounds, the 400 mg MA group by 4.2 pounds, the 100 mg MA group by 1.9 pounds, and decreased in the placebo group by 1.6 pounds. Mean weight changes at 4, 8, and 12 weeks for patients evaluable for efficacy in the two clinical trials are shown graphically. Changes in body composition during the 12 study weeks as measured by bioelectrical impedance analysis showed increases in non-water body weight in the MA-treated groups (see clinical studies table). In addition, edema developed or worsened in only 3 patients.

Greater percentages of MA-treated patients in the 800 mg group (89%), the 400 mg group (68%), and the 100 mg group (72%), than in the placebo group (50%), showed an improvement in appetite at last evaluation during the 12 study weeks. A statistically significant difference was observed between the 800 mg MA-treated group and the placebo group in the change in caloric intake from baseline to time of maximum weight change. Patients were asked to assess weight change, appetite, appearance, and overall perception of well-being in a 9-question survey. At maximum weight change, only the 800 mg MA-treated group gave responses that were statistically significantly more favorable to all questions when compared to the placebo-treated group. A dose response was noted in the survey with positive responses correlating with higher dose for all questions.

The second trial was a multicenter, randomized, double-blind, placebo-controlled study comparing megestrol acetate 800 mg/day versus placebo in AIDS patients with anorexia/cachexia and significant weight loss. Of the 100 patients entered on study, 65 met all inclusion/exclusion criteria, had at least two additional post baseline weight measurements over a 12-week period or had one post baseline weight measurement but dropped out for therapeutic failure. Patients in the 800 mg MA-treated group had a statistically significantly larger increase in mean maximum weight change than patients in the placebo group. From baseline to study week 12, mean weight increased by 11.2 pounds in the MA-treated group and decreased 2.1 pounds in the placebo group. Changes in body composition as measured by bioelectrical impedance analysis showed increases in non-water weight in the MA-treated group (see clinical studies table). No edema was reported in the MA-treated group. A greater percentage of MA-treated patients (67%) than placebo-treated patients (38%) showed an improvement in appetite at last evaluation during the 12 study weeks; this difference was statistically significant. There were no statistically significant differences between treatment groups in mean caloric change or in daily caloric intake at time to maximum weight change. In the same 9-question survey referenced in the first trial, patients' assessments of weight change, appetite, appearance, and overall perception of well-being showed increases in mean scores in MA-treated patients as compared to the placebo group.

Megestrol Acetate Oral Suspension, USP is indicated for the treatment of anorexia, cachexia, or an unexplained, significant weight loss in patients with a diagnosis of acquired immunodeficiency syndrome (AIDS).

Therapy with Megestrol Acetate Oral Suspension, USP for weight loss should only be instituted after treatable causes of weight loss are sought and addressed. These treatable causes include possible malignancies, systemic infections, gastrointestinal disorders affecting absorption, endocrine disease, and renal or psychiatric diseases.

Exacerbation of preexisting diabetes with increased insulin requirements has been reported in association with the use of Megestrol Acetate Oral Suspension, USP.

Data on carcinogenesis were obtained from studies conducted in dogs, monkeys, and rats treated with megestrol acetate at doses 53.2, 26.6, and 1.3 times lower than the proposed dose (13.3 mg/kg/day) for humans. No males were used in the dog and monkey studies. In female beagles, megestrol acetate (0.01, 0.1, or 0.25 mg/kg/day) administered for up to 7 years induced both benign and malignant tumors of the breast. In female monkeys, no tumors were found following 10 years of treatment with 0.01, 0.1, or 0.5 mg/kg/day megestrol acetate. Pituitary tumors were observed in female rats treated with 3.9 or 10 mg/kg/day of megestrol acetate for 2 years. The relationship of these tumors in rats and dogs to humans is unknown but should be considered in assessing the risk-to-benefit ratio when prescribing Megestrol Acetate Oral Suspension, USP and in surveillance of patients on therapy. (See WARNINGS.)

Because of the potential for adverse effects on the newborn, nursing should be discontinued if Megestrol Acetate Oral Suspension, USP is required.

Breakthrough bleeding was observed in all 10 female patients participating in the clinical trials. Megestrol Acetat Oral Suspension, USP is a progesterone derivative, which may induce vaginal bleeding in women.

Clinical studies of megestrol acetate in the treatment of anorexia, cachexia, or an unexplained, significant weight loss in patients with AIDS did not include sufficient numbers of patients aged 65 years and older to determine whether they respond differently than younger patients. Other reported clinical experience has not identified differences in responses between elderly and younger patients. In general, dose selection for an elderly patient should be cautious, usually starting at the low end of the dosing range, reflecting the greater frequency of decreased hepatic, renal, or cardiac function, and of concomitant disease or other drug therapy.

Adverse events which occurred in at least 5% of patients in any arm of the two clinical efficacy trials and the open trial are listed below by treatment group. All patients listed had at least one post baseline visit during the 12 study weeks. These adverse events should be considered by the physician when prescribing Megestrol Acetate Oral Suspension, USP.

No serious unexpected side effects have resulted from studies involving Megestrol Acetate Oral Suspension, USP administered in dosages as high as 1200 mg/day. In post-marketing experience, limited reports of overdose have been received. Signs and symptoms reported in the context of overdose included diarrhea, nausea, abdominal pain, shortness of breath, cough, unsteady gait, listlessness, and chest pain. There is no specific antidote for overdose with Megestrol Acetate Oral Suspension, USP. In case of overdose, appropriate supportive measures should be taken. Megestrol acetate has not been tested for dialyzability; however, due to its low solubility, it is postulated that dialysis would not be an effective means of treating overdose.

A plastic dosage cup with 10 mL and 20 mL markings is provided for convenience.

Dispense in a tight, light-resistant container with child-resistant closure.

Exposure or "overdose" at levels approaching recommended dosing levels could result in side effects described above (see WARNINGS and ADVERSE REACTIONS). Woman at risk of pregnancy should avoid such exposure.

Each mL contains: 40 mg of micronized

megestrol acetate in a lemon-lime flavored 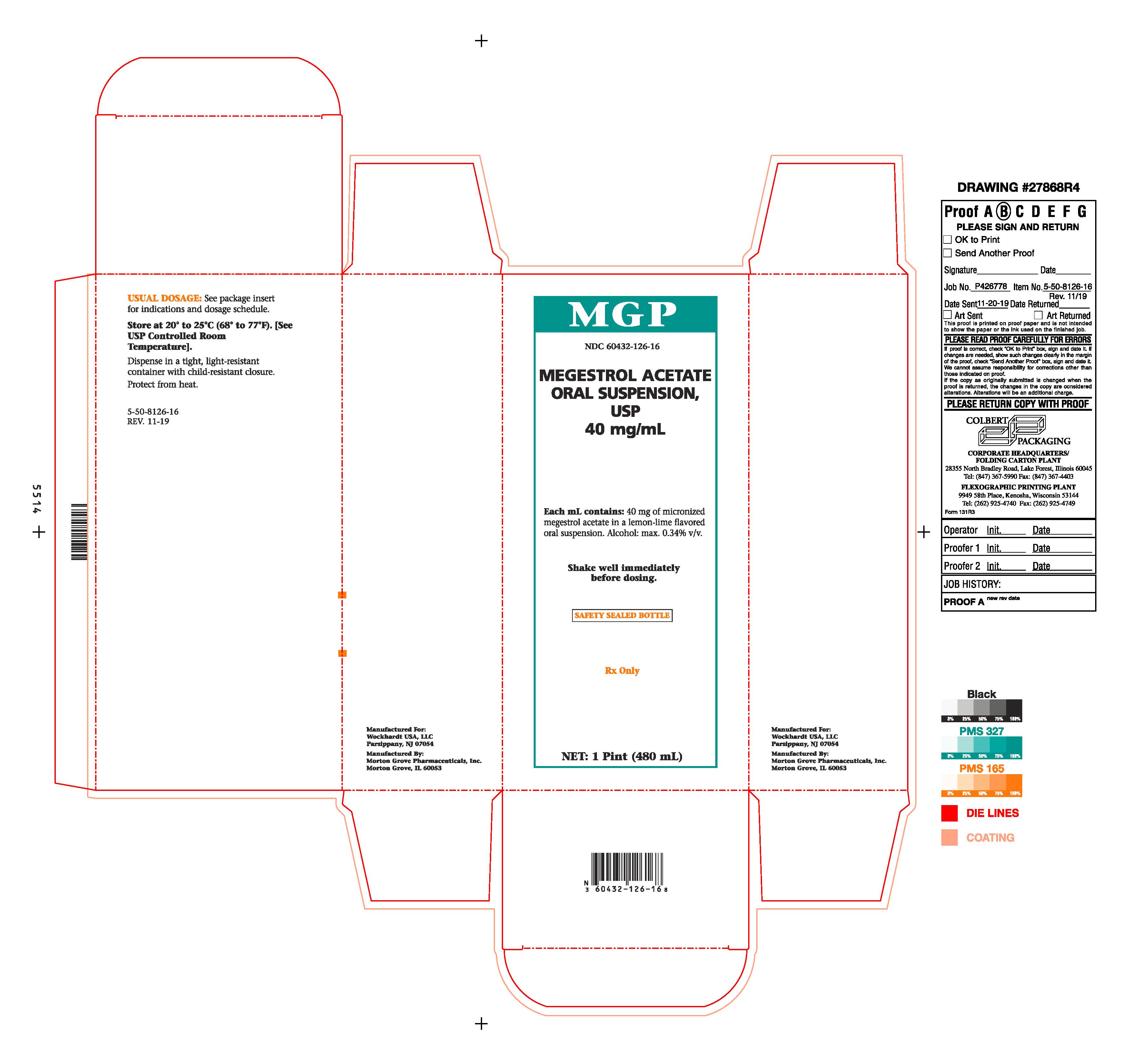