It is a crystalline white powder, very soluble in water. It is designated chemically as 3α-(Diphenylmethoxy)-1αH, 5αH-tropane methanesulfonate. Its molecular formula is C21H25NO • CH4O3S, and its structural formula is: 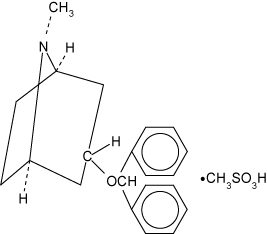 CLINICAL PHARMACOLOGY: Benztropine possesses both anticholinergic and antihistaminic effects, although only the former have been established as therapeutically significant in the management of parkinsonism.

INDICATIONS AND USAGE: For use as an adjunct in the therapy of all forms of parkinsonism.

Useful also in the control of extrapyramidal disorders (except tardive dyskinesia - see PRECAUTIONS) due to neuroleptic drugs (e.g., phenothiazines).

WARNINGS: Safe use in pregnancy has not been established.

Benztropine mesylate may impair mental and/or physical abilities required for performance of hazardous tasks such as operating machinery or driving a motor vehicle.

When benztropine is given concomitantly with phenothiazines, haloperidol, or other drugs with anticholinergic or antidopaminergic activity, patients should be advised to report gastrointestinal complaints, fever or heat intolerance promptly. Paralytic ileus, hyperthermia and heat stroke, all of which have sometimes been fatal, have occurred in patients taking anticholinergic-type antiparkinsonism drugs, including benztropine in combination with phenothiazines and/or tricyclic antidepressants.

Since benztropine contains structural features of atropine, it may produce anhidrosis. For this reason, it should be administered with caution during hot weather, especially when given concomitantly with other atropine-like drugs to the chronically ill, the alcoholic, those who have central nervous system disease, and those who do manual labor in a hot environment. Anhidrosis may occur more readily when some disturbance of sweating already exists. If there is evidence of anhidrosis, the possibility of hyperthermia should be considered. Dosage should be decreased at the discretion of the physician so that the ability to maintain body heat equilibrium by perspiration is not impaired. Severe anhidrosis and fatal hyperthermia have occurred.

General
Since benztropine mesylate has cumulative action, continued supervision is advisable. Patients with a tendency to tachycardia and patients with prostatic hypertrophy should be observed closely during treatment.

Dysuria may occur, but rarely becomes a problem. Urinary retention has been reported with benztropine.

The drug may cause complaints of weakness and inability to move particular muscle groups, especially in large doses. For example, if the neck has been rigid and suddenly relaxes, it may feel weak, causing some concern. In this event dosage adjustment is required.

Mental confusion and excitement may occur with large doses, or in susceptible patients. Visual hallucinations have been reported occasionally. Furthermore, in the treatment of extrapyramidal disorders due to neuroleptic drugs (e.g., phenothiazines) in patients with mental disorders, occasionally there may be intensification of mental symptoms. In such cases, antiparkinsonian drugs can precipitate a toxic psychosis. Patients with mental disorders should be kept under careful observation, especially at the beginning of treatment or if dosage is increased.

Because of the atropine-like side effects, benztropine mesylate should be used with caution in pediatric patients over three years of age (see CONTRADICTIONS ).

ADVERSE REACTIONS: The adverse reactions below, most of which are anticholinergic in nature, have been reported and within each category are listed in order of decreasing severity.

Metabolic/Immune or Skin:
Occasionally, an allergic reaction, e.g., skin rash, develops. If this can not be controlled by dosage reduction, the medication should be discontinued.

Treatment — Physostigmine salicylate, 1 to 2 mg, sc or iv, reportedly will reverse symptoms of anticholinergic intoxication1. A second injection may be given after 2 hours if required. Otherwise treatment is symptomatic and supportive. Induce emesis or perform gastric lavage (contraindicated in precomatose, convulsive, or psychotic states). Maintain respiration. A short-acting barbiturate may be used for CNS excitement, but with caution to avoid subsequent depression; supportive care for depression (avoid convulsant stimulants such as picrotoxin, pentylenetetrazol, or bemegride); artificial respiration for severe respiratory depression; a local miotic for mydriasis and cycloplegia; ice bags or other cold applications and alcohol sponges for hyperpyrexia, a vasopressor and fluids for circulatory collapse. Darken room for photophobia.

DOSAGE AND ADMINISTRATION: Benztropine mesylate tablets should be used when patients are able to take oral medication.

The injection is especially useful for psychotic patients with acute dystonic reactions or other reactions that make oral medication difficult or impossible. It is recommended also when a more rapid response is desired than can be obtained with tablets.

Because of cumulative action, therapy should be initiated with a low dose which is increased gradually at five or six-day intervals to the smallest amount necessary for optimal relief. Increases should be made in increments of 0.5 mg to a maximum of 6 mg or until optimal results are obtained without excessive adverse reactions.

Postencephalitic and Idiopathic Parkinsonism — The usual daily dose is 1 to 2 mg with a range of 0.5 to 6 mg orally or parenterally.

Some patients experience greatest relief by taking the entire dose at bedtime, others react more favorably to divided doses, two to four times a day. Frequently, one dose a day is sufficient and divided doses may be unnecessary or undesirable.

When benztropine is started, do not terminate therapy with other antiparkinsonian agents abruptly. If the other agents are to be reduced or discontinued, it must be done gradually. Many patients obtain greatest relief with combination therapy.

Benztropine mesylate may be used concomitantly with carbidopa-levodopa, or with levodopa, in which case periodic dosage adjustment may be required in order to maintain optimum response.

Drug-Induced Extrapyramidal Disorders— In treating extrapyramidal disorders due to neuroleptic drugs (e.g., phenothiazines), the recommended dosage is 1 to 4 mg once or twice a day orally or parenterally. Dosage must be individualized according to the need of the patient. Some patients require more than recommended; others do not need as much.

Certain drug-induced extrapyramidal disorders that develop slowly may not respond to benztropine.

Benztropine mesylate tablets USP 2 mg - Each white, round compressed tablet is scored and debossed with identification logo cor and 145 on one side.
NDC 21695-286-30 in bottles of 30 tablets