Doxercalciferol is a colorless crystalline compound with a calculated molecular weight of 412.66 and a molecular formula of C28H44O2. It is soluble in oils and organic solvents, but is relatively insoluble in water. Chemically, doxercalciferol is (1α,3β,5Z,7E,22E)-9,10-secoergosta-5,7,10(19),22-tetraene-1,3-diol and has the structural formula presented in Figure 1. 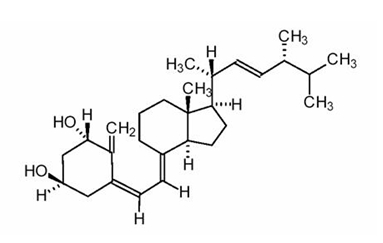 Vitamin D levels in humans depend on two sources: (1) exposure to the ultraviolet rays of the sun for conversion of 7-dehydrocholesterol in the skin to vitamin D3 (cholecalciferol) and (2) dietary intake of either vitamin D2 (ergocalciferol) or vitamin D3. Vitamin D2 and vitamin D3 must be metabolically activated in the liver and kidney before becoming fully active on target tissues. The initial step in the activation process is the introduction of a hydroxyl group in the side chain at C-25 by the hepatic enzyme, CYP 27 (a vitamin D-25-hydroxylase). The products of this reaction are 25-(OH)D2 and 25-(OH)D3, respectively. Further hydroxylation of these metabolites occurs in the mitochondria of kidney tissue, catalyzed by renal 25-hydroxyvitamin D-1-α-hydroxylase to produce 1α,25-(OH)2D2, the primary biologically active form of vitamin D2, and 1α,25-(OH)2D3 (calcitriol), the biologically active form of vitamin D3.

Calcitriol (1α,25-(OH)2D3) and 1α,25-(OH)2D2 regulate blood calcium at levels required for essential body functions. Specifically, the biologically active vitamin D metabolites control the intestinal absorption of dietary calcium, the tubular reabsorption of calcium by the kidney and, in conjunction with parathyroid hormone (PTH), the mobilization of calcium from the skeleton. They act directly on bone cells (osteoblasts) to stimulate skeletal growth, and on the parathyroid glands to suppress PTH synthesis and secretion. These functions are mediated by the interaction of these biologically active metabolites with specific receptor proteins in the various target tissues. In uremic patients, deficient production of biologically active vitamin D metabolites (due to lack of or insufficient 25-hydroxyvitamin D-1-alpha-hydroxylase activity) leads to secondary hyperparathyroidism, which contributes to the development of metabolic bone disease in patients with renal failure.

Peak blood levels of 1α,25-(OH)2D2 are reached at 8 +/- 5.9 hours (mean +/- SD) after a single intravenous dose of 5 mcg of doxercalciferol. The mean elimination half-life of 1α,25-(OH)2D2 after an oral dose is approximately 32 to 37 hours with a range of up to 96 hours. The mean elimination half-life in patients with end stage renal disease (ESRD) and in healthy volunteers appears to be similar following an oral dose. Hemodialysis causes a temporary increase in 1α,25-(OH)2D2 mean concentrations presumably due to volume contraction. 1α,25-(OH)2D2 is not removed from blood during hemodialysis.

Decreases in plasma iPTH from baseline values were calculated using as baseline the average of the last three values obtained during the 8-week washout period and are displayed in the table below. Plasma iPTH levels were measured weekly during the 12-week study.

In both studies, iPTH levels increased progressively and significantly in 62.9% of patients during the 8-week washout (control) period during which no vitamin D derivatives were administered. In contrast, doxercalciferol injection treatment resulted in a clinically significant reduction (at least 30%) from baseline in mean iPTH levels during the 12-week open-label treatment period in more than 92% of the 70 treated patients.

Table 2 shows the numbers of patients who achieved iPTH levels below 300 pg/mL on one, two, or three or more non-consecutive occasions during the 12-week treatment period. Thirty-seven of 70 patients (53%) had plasma iPTH levels within the targeted range (150 to 300 pg/mL) during Weeks 10 to 12.

Doxercalciferol injection is indicated for the treatment of secondary hyperparathyroidism in patients with chronic kidney disease on dialysis.

Doxercalciferol injection should not be given to patients with a tendency towards hypercalcemia or current evidence of vitamin D toxicity.

Doxercalciferol injection is contraindicated in patients with previous hypersensitivity to doxercalciferol or any of its ingredients (see WARNINGS and ADVERSE REACTIONS).

Overdosage of any form of vitamin D, including doxercalciferol injection is dangerous (see OVERDOSAGE). Progressive hypercalcemia due to overdosage of vitamin D and its metabolites may be so severe as to require emergency attention. Acute hypercalcemia may exacerbate tendencies for cardiac arrhythmias and seizures and may potentiate the action of digitalis drugs. Chronic hypercalcemia can lead to generalized vascular calcification and other soft-tissue calcification. The serum calcium times serum phosphorus (Ca X P) product should be maintained at < 55 mg2/dL2 in patients with chronic kidney disease. Radiographic evaluation of suspect anatomical regions may be useful in the early detection of this condition.

Magnesium-containing antacids and doxercalciferol injection should not be used concomitantly in patients on chronic renal dialysis because such use may lead to the development of hypermagnesemia.

Serious hypersensitivity reactions, including fatal outcome, have been reported post marketing in patients on hemodialysis following administration of doxercalciferol injection. Hypersensitivity reactions include anaphylaxis with symptoms of angioedema (involving face, lips, tongue and airways), hypotension, unresponsiveness, chest discomfort, shortness of breath, and cardiopulmonary arrest. These reactions may occur separately or together.

The principal adverse effects of treatment with doxercalciferol injection are hypercalcemia, hyperphosphatemia, and oversuppression of PTH (iPTH less than 150 pg/mL). Prolonged hypercalcemia can lead to calcification of soft tissues, including the heart and arteries, and hyperphosphatemia can exacerbate hyperparathyroidism. Oversuppression of PTH may lead to adynamic bone syndrome. All of these potential adverse effects should be managed by regular patient monitoring and appropriate dosage adjustments. During treatment with doxercalciferol injection, patients usually require dose titration, as well as adjustment in co-therapy (i.e., dietary phosphate binders) in order to maximize PTH suppression while maintaining serum calcium and phosphorus levels within prescribed ranges.

The patient, spouse, or guardian should be informed about adherence to instructions about diet, calcium supplementation, and avoidance of the use of nonprescription drugs without prior approval from the patient’s physician. Patients should also be carefully informed about the symptoms of hypercalcemia (see ADVERSE REACTIONS).

Long-term studies in animals to evaluate the carcinogenic potential of doxercalciferol have not been conducted. No evidence of genetic toxicity was observed in an in vitro bacterial mutagenicity assay (Ames test) or a mouse lymphoma gene mutation assay. Doxercalciferol caused structural chromatid and chromosome aberrations in an in vitro human lymphocyte clastogenicity assay with metabolic activation. However, doxercalciferol was negative in an in vivo mouse micronucleus clastogenicity assay. Doxercalciferol had no effect on male or female fertility in rats at oral doses up to 2.5 mcg/kg/day (approximately 3 times the maximum recommended human oral dose of 60 mcg/wk based on mcg/m2 body surface area).

Reproduction studies in rats and rabbits, at doses up to 20 mcg/kg/day and 0.1 mcg/kg/day (approximately 25 times and less than the maximum recommended human oral dose of 60 mcg/week based on mcg/m2 body surface area, respectively) have revealed no teratogenic or fetotoxic effects due to doxercalciferol. There are, however, no adequate and well controlled studies in pregnant women. Because animal reproduction studies are not always predictive of human response, this drug should be used during pregnancy only if clearly needed.

It is not known whether doxercalciferol is excreted in human milk. Because other vitamin D derivatives are excreted in human milk and because of the potential for serious adverse reactions in nursing infants from doxercalciferol, a decision should be made whether to discontinue nursing or to discontinue the drug, taking into account the importance of the drug to the mother.

Safety and efficacy of doxercalciferol injection in pediatric patients have not been established.

Of the 70 patients treated with doxercalciferol injection in the two Phase 3 clinical studies, 12 patients were 65 years or over. In these studies, no overall differences in efficacy or safety were observed between patients 65 years or older and younger patients.

Studies examining the influence of hepatic insufficiency on the metabolism of doxercalciferol were inconclusive. Since patients with hepatic insufficiency may not metabolize doxercalciferol appropriately, the drug should be used with caution in patients with impaired hepatic function. More frequent monitoring of iPTH, calcium, and phosphorus levels should be done in such individuals.

Potential adverse effects of doxercalciferol injection are, in general, similar to those encountered with excessive vitamin D intake. The early and late signs and symptoms of vitamin D intoxication associated with hypercalcemia include:

Administration of doxercalciferol injection to patients in excess doses can cause hypercalcemia, hypercalciuria, hyperphosphatemia, and over-suppression of PTH secretion leading in certain cases to adynamic bone disease. High intake of calcium and phosphate concomitant with doxercalciferol injection may lead to similar abnormalities. High levels of calcium in the dialysate bath may contribute to hypercalcemia.

Treatment of Hypercalcemia and Overdosage

General treatment of hypercalcemia (greater than 1 mg/dL above the upper limit of the normal range) consists of immediate suspension of doxercalciferol injection therapy, institution of a low calcium diet, and withdrawal of calcium supplements. Serum calcium levels should be determined at least weekly until normocalcemia ensues. Hypercalcemia usually resolves in 2 to 7 days. When serum calcium levels have returned to within normal limits, doxercalciferol injection therapy may be reinstituted at a dose that is at least 1 mcg lower than prior therapy. Serum calcium levels should be obtained weekly after all dosage changes and during subsequent dosage titration. Persistent or markedly elevated serum calcium levels may be corrected by dialysis against a reduced calcium or calcium-free dialysate.

The treatment of acute accidental overdosage of doxercalciferol injection should consist of general supportive measures. Serial serum electrolyte determinations (especially calcium), rate of urinary calcium excretion, and assessment of electrocardiographic abnormalities due to hypercalcemia should be obtained. Such monitoring is critical in patients receiving digitalis. Discontinuation of supplemental calcium and institution of a low calcium diet are also indicated in accidental overdosage. If persistent and markedly elevated serum calcium levels occur, treatment with standard medical care should be followed, as needed. Based on similarities between doxercalciferol and its active metabolite, 1α,25-(OH)2D2, it is expected that doxercalciferol is not removed from the blood by dialysis.

For intravenous use only. The optimal dose of doxercalciferol injection must be carefully determined for each patient.

The recommended initial dose of doxercalciferol injection is 4 mcg administered intravenously as a bolus dose 3 times weekly at the end of dialysis (approximately every other day). The initial dose should be adjusted, as needed, in order to lower blood iPTH into the range of 150 to 300 pg/mL. The dose may be increased at 8-week intervals by 1 mcg to 2 mcg if iPTH is not lowered by 50% and fails to reach the target range. Dosages higher than 18 mcg weekly have not been studied. Drug administration should be suspended if iPTH falls below 100 pg/mL and restarted one week later at a dose that is at least 1 mcg lower than the last administered dose.  During titration, iPTH, serum calcium, and serum phosphorus levels should be obtained weekly. If hypercalcemia, hyperphosphatemia, or a serum calcium times phosphorus product greater than 55 mg2/dL2 is noted, the dose of doxercalciferol injection should be decreased or suspended and/or the dose of phosphate binders should be appropriately adjusted. If suspended, the drug should be restarted at a dose that is 1 mcg lower.

Dosing must be individualized and based on iPTH levels with monitoring of serum calcium and serum phosphorus levels. Table 5 presents a suggested approach in dose titration:

Doxercalciferol Injection is available in the following package: 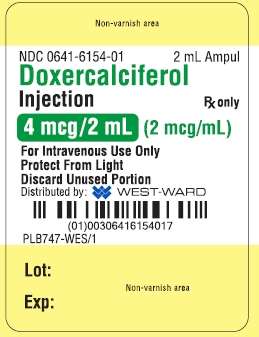