Each mL of the sterile solution for intravenous injection contains 100 mg tranexamic acid and Water for Injection to 1 mL.

Tranexamic acid is a white crystalline powder. The aqueous solution for injection has a pH of 6.5 to 8.0.

Tranexamic acid binds more strongly than aminocaproic acid to both the strong and weak receptor sites of the plasminogen molecule in a ratio corresponding to the difference in potency between the compounds. Tranexamic acid in a concentration of 1 mg per mL does not aggregate platelets in vitro.

The plasma protein binding of tranexamic acid is about 3% at therapeutic plasma levels and seems to be fully accounted for by its binding to plasminogen. Tranexamic acid does not bind to serum albumin.
After an intravenous dose of 1 g, the plasma concentration time curve shows a triexponential decay with a half-life of about 2 hours for the terminal elimination phase. The initial volume of distribution is about 9 to 12 liters. Urinary excretion is the main route of elimination via glomerular filtration. Overall renal clearance is equal to overall plasma clearance (110 to 116 mL/min) and more than 95% of the dose is excreted in the urine as unchanged drug. Excretion of tranexamic acid is about 90% at 24 hours after intravenous administration of 10 mg per kg body weight.

An antifibrinolytic concentration of tranexamic acid remains in different tissues for about 17 hours, and in the serum, up to seven or eight hours.

Tranexamic Acid Injection is indicated in patients with hemophilia for short-term use (two to eight days) to reduce or prevent hemorrhage and reduce the need for replacement therapy during and following tooth extraction.

Focal areas of retinal degeneration have developed in cats, dogs and rats following oral or intravenous tranexamic acid at doses between 250 to 1600 mg/kg/day (6 to 40 times the recommended usual human dose) from 6 days to 1 year. The incidence of such lesions has varied from 25% to 100% of animals treated and was dose-related. At lower doses some lesions have appeared to be reversible.
Limited data in cats and rabbits showed retinal changes in some animals with doses as low as 126 mg/kg/day (only about 3 times the recommended human dose) administered for several days to two weeks.

No retinal changes have been reported or noted in eye examinations in patients treated with tranexamic acid for weeks to months in clinical trials.

However, visual abnormalities, often poorly characterized, represent the most frequently reported postmarketing adverse reaction in Sweden. For patients who are to be treated continually for longer than several days, an ophthalmological examination, including visual acuity, color vision, eye-ground and visual fields, is advised, before commencing and at regular intervals during the course of treatment. Tranexamic acid should be discontinued if changes in examination results are found.

Cases of allergic reaction with use of intravenous tranexamic acid, including anaphylaxis or anaphylactoid reaction have been reported that are suggestive of a causal relationship.

The dose of Tranexamic Acid Injection should be reduced in patients with renal insufficiency because of the risk of accumulation.
(See DOSAGE AND ADMINISTRATION.)

Ureteral obstruction due to clot formation in patients with upper urinary tract bleeding has been reported in patients treated with Tranexamic Acid Injection.

Patients with a previous history of thromboembolic disease may be at increased risk for venous or arterial thrombosis.

Tranexamic Acid Injection should not be administered concomitantly with Factor IX Complex concentrates or Anti-inhibitor Coagulant concentrates, as the risk of thrombosis may be increased.

Patients with disseminated intravascular coagulation (DIC), who require treatment with Tranexamic Acid Injection, must be under strict supervision of a physician experienced in treating this disorder.

Tranexamic acid may cause dizziness and therefore may influence the ability to drive or use machines.

No studies of interactions between Tranexamic Acid Injection and other drugs have been conducted.

An increased incidence of leukemia in male mice receiving tranexamic acid in food at a concentration of 4.8% (equivalent to doses as high as 5 g/kg/day) may have been related to treatment. Female mice were not included in this experiment.

Hyperplasia of the biliary tract and cholangioma and adenocarcinoma of the intrahepatic biliary system have been reported in one strain of rats after dietary administration of doses exceeding the maximum tolerated dose for 22 months. Hyperplastic, but not neoplastic, lesions were reported at lower doses. Subsequent long-term dietary administration studies in a different strain of rat, each with an exposure level equal to the maximum level employed in the earlier experiment, have failed to show such hyperplastic / neoplastic changes in the liver. No mutagenic activity has been demonstrated in several in vitro and in vivo test systems.

There are no clinical data to assess the effects of tranexamic acid on fertility.

Reproduction studies performed in mice, rats, and rabbits have not revealed any evidence of impaired fertility or adverse effects on the fetus due to tranexamic acid.

There are no adequate and well-controlled studies in pregnant women. However, tranexamic acid is known to pass the placenta and appears in cord blood at concentrations approximately equal to maternal concentration. Because animal reproduction studies are not always predictive of human response, this drug should be used during pregnancy only if clearly needed.

See above under Pregnancy.

Tranexamic acid is present in the mother’s milk at a concentration of about a hundredth of the corresponding serum levels. Caution should be exercised when Tranexamic Acid Injection is administered to a nursing woman.

The drug has had limited use in pediatric patients, principally in connection with tooth extraction. The limited data suggest that dosing instructions for adults can be used for pediatric patients needing Tranexamic Acid Injection therapy.

Clinical studies of Tranexamic Acid Injection did not include sufficient numbers of subjects aged 65 and over to determine whether they respond differently from younger subjects. Other reported clinical experience has not identified differences in responses between the elderly and younger patients. In general, dose selection for an elderly patient should be cautious, usually starting at the low end of the dosing range, reflecting the greater frequency of decreased hepatic, renal, or cardiac function, and of concomitant disease or other drug therapy.

This drug is known to be substantially excreted by the kidney, and the risk of toxic reactions to this drug may be greater in patients with impaired renal function. Because elderly patients are more likely to have decreased renal function, care should be taken in dose selection, and it may be useful to monitor renal function (see CLINICAL PHARMACOLOGY and DOSAGE AND ADMINISTRATION).

Gastrointestinal disturbances (nausea, vomiting, diarrhea) may occur but disappear when the dosage is reduced. Allergic dermatitis giddiness and hypotension have been reported occasionally. Hypotension has been observed when intravenous injection is too rapid. To avoid this response, the solution should not be injected more rapidly than 1 mL per minute.

Worldwide Postmarketing Reports: Thromboembolic events (e.g., deep vein thrombosis, pulmonary embolism, cerebral thrombosis, acute renal cortical necrosis, and central retinal artery and vein obstruction) have been rarely reported in patients receiving tranexamic acid for indications other than hemorrhage prevention in patients with hemophilia. Convulsion, chromatopsia, and visual impairment have also been reported. However, due to the spontaneous nature of the reporting of medical events and the lack of controls, the actual incidence and causal relationship of drug and event cannot be determined.

Note: For patients with moderate to severe impaired renal function, the following dosages are recommended:

Single-dose vials: Discard any remaining portion in the vials after single use.

﻿The diluted mixture may be stored for up to 24 hours at room temperature prior to patient administration. 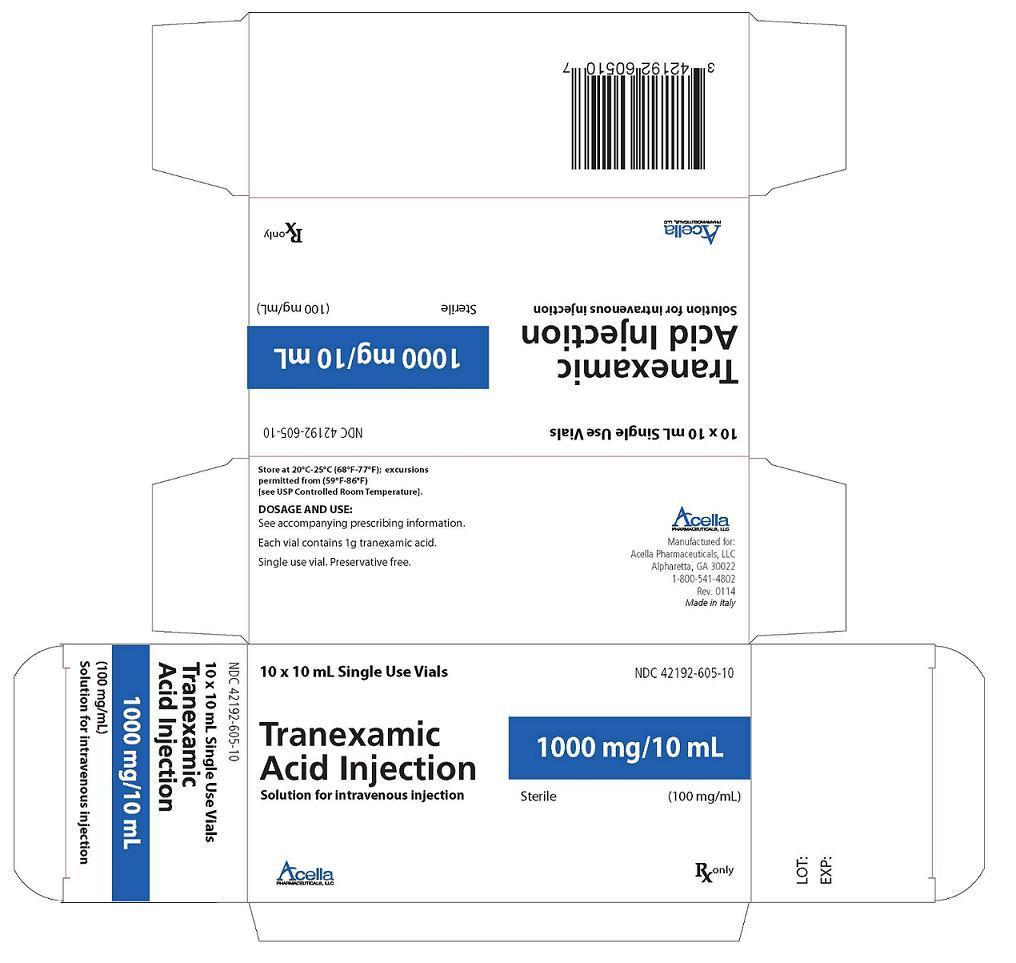