Klor-Con is indicated for the treatment and prophylaxis of hypokalemia with or without metabolic alkalosis, in patients for whom dietary management with potassium-rich foods or diuretic dose reduction is insufficient.

If serum potassium concentration is less than 2.5 mEq/L, use intravenous potassium instead of oral supplementation.

The treatment of potassium depletion, particularly in the presence of cardiac disease, renal disease, or acidosis, requires careful attention to acid-base balance, volume status, electrolytes, including magnesium, sodium, chloride, phosphate, and calcium, electrocardiograms, and the clinical status of the patient. Correct volume status, acid-base balance, and electrolyte deficits as appropriate.

Take Klor-Con with meals and with a glass of water or other liquid. Do not take Klor-Con on an empty stomach because of its potential for gastric irritation [see Warnings and Precautions (5.1)].

Dosage must be adjusted to the individual needs of each patient. Dosages greater than 40 mEq per day should be divided such that no more than 40 mEq is given in a single dose.

Treatment of Hypokalemia: Typical dose range is 40 to 100 mEq per day.

Maintenance or Prophylaxis: Typical dose range is 20 mEq per day.

Klor-Con extended-release tablets are supplied as:

Potassium chloride is contraindicated in patients on triamterene and amiloride.

Klor-Con extended-release tablets should not be taken on an empty stomach because of its potential for gastric irritation [see Dosage and Administration (2.1)].

The following adverse reactions have been identified with use of oral potassium salts. Because these reactions are reported voluntarily from a population of uncertain size, it is not always possible to reliably estimate their frequency or establish a causal relationship to drug exposure.

There have been reports hyperkalemia and of upper and lower gastrointestinal condition including obstruction, bleeding, ulceration, perforation.

Skin rash has been reported rarely.

Use with triamterene or amiloride can produce severe hyperkalemia. Concomitant use is contraindicated [see Contraindications (4)].

There are no human data related to use of Klor-Con during pregnancy, and animal reproduction studies have not been conducted. Potassium supplementation that does not lead to hyperkalemia is not expected to cause fetal harm.

Safety and effectiveness in the pediatric population have not been established.

Clinical studies of Klor-Con extended-release did not include sufficient numbers of subjects aged 65 and over to determine whether they respond differently from younger subjects. Other reported clinical experience has not identified differences in responses between the elderly and younger patients. In general, dose selection for an elderly patient should be cautious, usually starting at the low end of the dosing range, reflecting the greater frequency of decreased hepatic, renal or cardiac function, and of concomitant disease or other drug therapy.

Based on published literature, the baseline corrected serum concentrations of potassium measured over 3 hours after administration in cirrhotic subjects who received an oral potassium load rose to approximately twice that of normal subjects who received the same load. Patients with cirrhosis should usually be started at the low end of the dosing range, and the serum potassium level should be monitored frequently [see Clinical Pharmacology (12.3)].

Patients with renal impairment have reduced urinary excretion of potassium and are at substantially increased risk of hyperkalemia. Patients with impaired renal function, particularly if the patient is on RAAS inhibitors or NSAIDs, should usually be started at the low end of the dosing range because of the potential for development of hyperkalemia [see Drug Interactions (7.2, 7.3)]. The serum potassium level should be monitored frequently. Renal function should be assessed periodically.

It is important to recognize that hyperkalemia is usually asymptomatic and may be manifested only by an increased serum potassium concentration (6.5 mEq/L to 8.0 mEq/L) and characteristic electrocardiographic changes (peaking of T-waves, loss of P-wave, depression of S-T segment and prolongation of the QT interval). Late manifestations include muscle paralysis and cardiovascular collapse from cardiac arrest (9 to 12 mEq/L).

Treatment measures for hyperkalemia include the following:

In treating hyperkalemia, it should be recalled that in patients who have been stabilized on digitalis, too rapid a lowering of the serum potassium concentration can produce digitalis toxicity.

The extended-release feature means that absorption and toxic effects may be delayed for hours. Consider standard measures to remove any unabsorbed drug.

Klor-Con® extended-release tablets are an electrolyte replenisher. The chemical name is potassium chloride, and the structural formula is KCl. Potassium chloride, USP is a white, granular powder or colorless crystals. It is odorless and has a saline taste. Its solutions are neutral to litmus. It is freely soluble in water and insoluble in alcohol.

The potassium chloride in Klor-Con extended-release is completely absorbed before it leaves the small intestine. The wax matrix is not absorbed and is excreted in the feces; in some instances the empty matrices may be noticeable in the stool. When the bioavailability of the potassium ion from the Klor-Con extended-release is compared to that of a true solution the extent of absorption is similar.

Increased urinary potassium excretion is first observed 1 hour after administration of Klor-Con extended-release, reaches a peak at approximately 4 hours, and extends up to 8 hours.

Carcinogenicity, mutagenicity and fertility studies in animals have not been performed. Potassium is a normal dietary constituent.

Dispense in a tight container with a child-resistant closure. 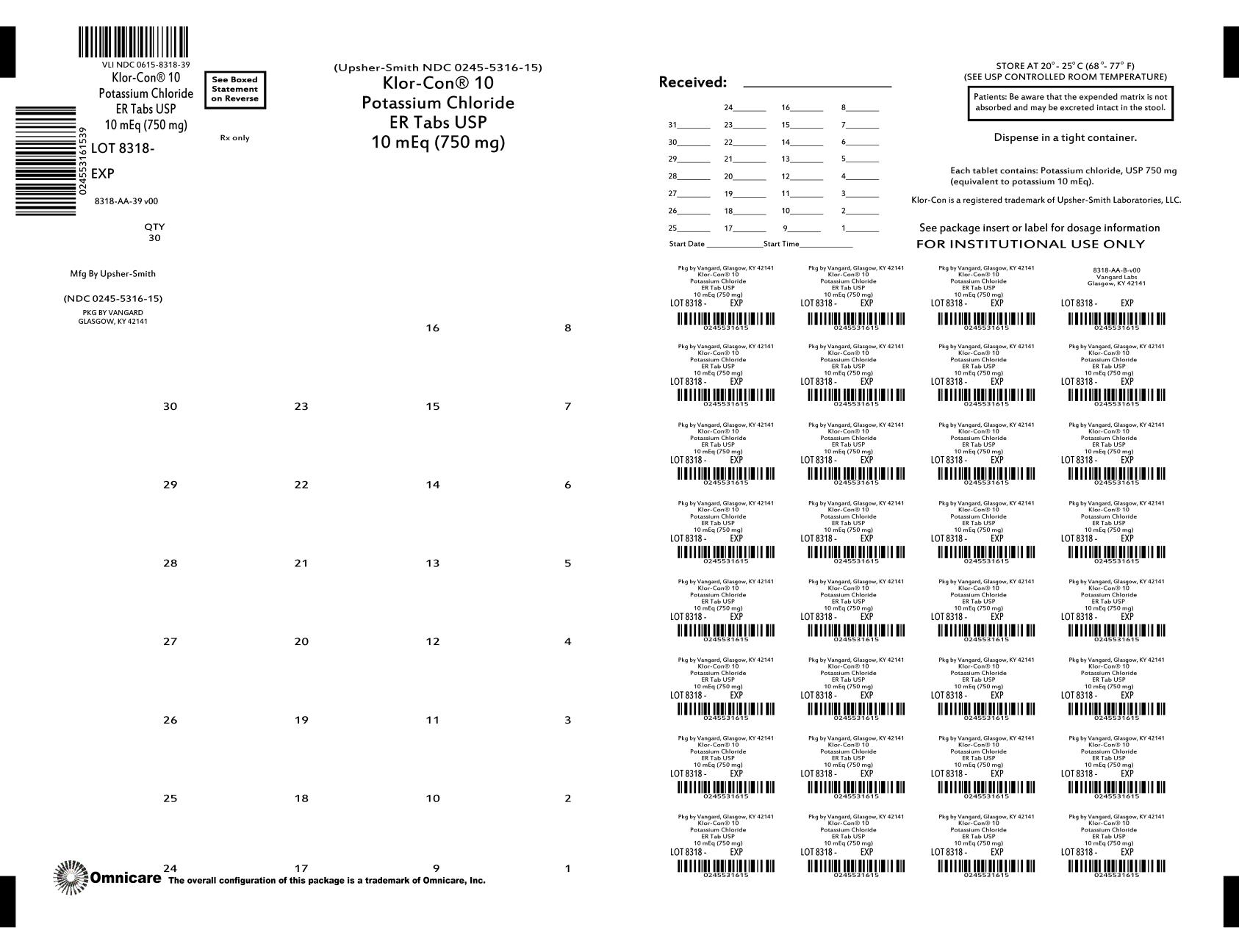