Address hypovolemia before initiation of norepinephrine bitartrate injection therapy. If the patient does not respond to therapy, suspect occult hypovolemia [see Warnings and Precautions (5.1)].

Dilute norepinephrine bitartrate injection prior to use [see Dosage and Administration (2.3)].

Infuse norepinephrine bitartrate injection into a large vein. Avoid infusions into the veins of the leg in the elderly or in patients with occlusive vascular disease of the legs [see Warnings and Precautions (5.1)]. Avoid using a catheter-tie-in technique.

After an initial dosage of 8 to 12 mcg per minute via intravenous infusion, assess patient response and adjust dosage to maintain desired hemodynamic effect. Monitor blood pressure every two minutes until the desired hemodynamic effect is achieved, and then monitor blood pressure every five minutes for the duration of the infusion.

Typical maintenance intravenous dosage is 2 to 4 mcg per minute.

Visually inspect norepinephrine bitartrate injection for particulate matter and discoloration prior to administration (the solution is colorless). Do not use the solution if its color is pinkish or darker than slightly yellow or if it contains a precipitate.

Add the content of one norepinephrine bitartrate injection vial (4 mg in 4 mL) to 1,000 mL of 5% Dextrose Injection, USP or Sodium Chloride Injection solutions that contain 5% dextrose to produce a 4 mcg per mL dilution. Dextrose reduces loss of potency due to oxidation. Administration in saline solution alone is not recommended.

Use higher concentration solutions in patients requiring fluid restriction. Prior to use, store the diluted norepinephrine bitartrate injection solution for up to 24 hours at room temperature [20°C to 25°C (68°F to 77°F)] and protect from light.

Whole blood or plasma, if indicated to increase blood volume, should be administered separately.

or peripheral vascular thrombosis, as this may increase ischemia and extend the area of infarction.

Extravasation of norepinephrine bitartrate may cause necrosis and sloughing of surrounding tissue. To reduce the risk of extravasation, infuse into a large vein, check the infusion site frequently for free flow, and monitor for signs of extravasation [see Dosage and Administration (2.1)].

To prevent sloughing and necrosis in areas in which extravasation has occurred, infiltrate the ischemic area as soon as possible, using a syringe with a fine hypodermic needle with 5 to 10 mg of phentolamine mesylate in 10 to 15 mL of 0.9% Sodium Chloride Injection in adults.

Sympathetic blockade with phentolamine causes immediate and conspicuous local hyperemic changes if the area is infiltrated within 12 hours.

Sudden cessation of the infusion rate may result in marked hypotension. When discontinuing the infusion, gradually reduce the norepinephrine bitartrate infusion rate while expanding blood volume with intravenous fluids.

Norepinephrine Bitartrate elevates intracellular calcium concentrations and may cause arrhythmias, particularly in the setting of hypoxia or hypercarbia. Perform continuous cardiac monitoring of patients with arrhythmias.

Norepinephrine Bitartrate Injection contains sodium metabisulfite, a sulfite that may cause allergic-type reactions including anaphylactic symptoms and life-threatening or less severe asthmatic episodes in certain susceptible people. The overall prevalence of sulfite sensitivity in the general population is unknown. Sulfite sensitivity is seen more frequently in asthmatic than in non-asthmatic people.

The following adverse reactions are described in greater detail in other sections:

The most common adverse reactions are hypertension and bradycardia.

The following adverse reactions can occur:

Co-administration of norepinephrine bitartrate with monoamine oxidase (MAO) inhibitors or other drugs with MAO-inhibiting properties (e.g., linezolid) can cause severe, prolonged hypertension.

If administration of norepinephrine bitartrate cannot be avoided in patients who recently have received any of these drugs and in whom, after discontinuation, MAO activity has not yet sufficiently recovered, monitor for hypertension.

Limited published data consisting of a small number of case reports and multiple small trials involving the use of norepinephrine in pregnant women at the time of delivery have not identified an increased risk of major birth defects, miscarriage or adverse maternal or fetal outcomes. There are risks to the mother and fetus from hypotension associated with septic shock, myocardial infarction and stroke which are medical emergencies in pregnancy and can be fatal if left untreated. (see Clinical Considerations). In animal reproduction studies, using high doses of intravenous norepinephrine resulted in lowered maternal placental blood flow. Clinical relevance

to changes in the human fetus is unknown since the average maintenance dose is ten times lower (see Data). Increased fetal reabsorptions were observed in pregnant hamsters after receiving daily injections at approximately 2 times the maximum recommended dose on a mg/m3 basis for four days during organogenesis (see Data).

A study in pregnant sheep receiving high doses of intravenous norepinephrine (40 mcg/min, at approximately 10 times the average maintenance dose of 2 to 4 mcg/min in human, on a mg/kg basis) exhibited a significant decrease in maternal placental blood flow. Decreases in fetal oxygenation, urine and lung liquid flow were also observed.

Norepinephrine administration to pregnant rats on Gestation Day 16 or 17 resulted in cataract production in rat fetuses.

In hamsters, an increased number of resorptions (29.1% in study group vs. 3.4% in control group), fetal microscopic liver abnormalities and delayed skeletal ossification were observed at approximately 2 times the maximum recommended intramuscular or subcutaneous dose (on a mg/m2 basis at a maternal subcutaneous dose of 0.5 mg/kg/day from Gestation Day 7 to 10).

Clinical studies of norepinephrine bitartrate did not include sufficient numbers of subjects aged 65 and over to determine whether they respond differently from younger subjects. Other reported clinical experience has not identified differences in responses between the elderly and younger patients. In general, dose selection for an elderly patient should be cautious, usually starting at the low end of the dosing range, reflecting the greater frequency of decreased hepatic, renal, or cardiac function, and of concomitant disease or other drug therapy.

Avoid administration of norepinephrine bitartrate into the veins in the leg in elderly patients [see Warnings and Precautions (5.1)].

In case of overdosage, discontinue norepinephrine bitartrate until the condition of the patient stabilizes.

The primary pharmacodynamic effects of norepinephrine are cardiac stimulation and vasoconstriction. Cardiac output is generally unaffected, although it can be decreased, and total peripheral resistance is also elevated. The elevation in resistance and pressure result in reflex vagal activity, which slows the heart rate and increases stroke volume. The elevation in vascular tone or resistance reduces blood flow to the major abdominal organs as well as to skeletal muscle. Coronary blood flow is substantially increased secondary to the indirect effects of

alpha stimulation. After intravenous administration, a pressor response occurs rapidly and reaches steady state within 5 minutes. The pharmacologic actions of norepinephrine are terminated primarily by uptake and metabolism in sympathetic nerve endings. The pressor action stops within 1-2 minutes after the infusion is discontinued.

Plasma protein binding of norepinephrine is approximately 25%. It is mainly bound to plasma albumin and to a smaller extent to prealbumin and alpha 1-acid glycoprotein. The volume of distribution is 8.8 L. Norepinephrine localizes mainly in sympathetic nervous tissue. It crosses the placenta but not the blood-brain barrier.

The mean half-life of norepinephrine is approximately 2.4 min. The average metabolic clearance is 3.1 L/min.

Noradrenaline metabolites are excreted in urine primarily as sulphate conjugates and, to a lesser extent, as glucuronide conjugates. Only small quantities of norepinephrine are excreted unchanged.

Carcinogenesis, mutagenesis, and fertility studies have not been performed.

Norepinephrine Bitartrate Injection, USP, is a sterile, colorless to pale yellow solution for injection intended for intravenous use. It contains the equivalent of 1 mg of norepinephrine base per 1 mL (4 mg/4 mL). It is available as 4 mg/4 mL in single-dose amber glass vials.

Store in original carton until time of administration to protect from light. Discard unused portion.

Advise the patient, family, or caregiver to report signs of extravasation urgently [see Warnings and Precautions (5.1)].

FOR INTRAVENOUS INFUSION ONLY
DILUTE BEFORE USE.
Warning: Contains Sulfites. 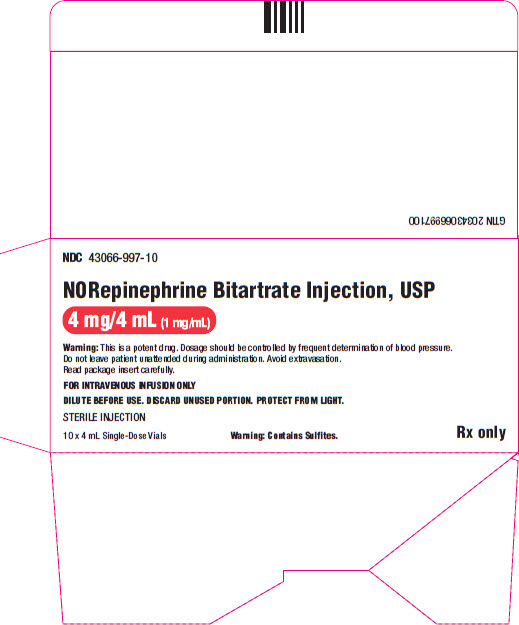 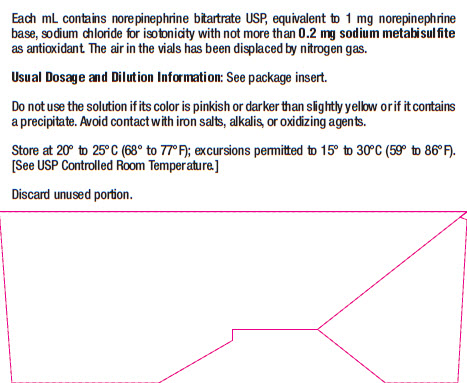 Warning: This is a potent drug. Dosage should be controlled by frequent determination of blood pressure.
Do not leave patient unattended during administration. Avoid extravasation.
Read package insert carefully.

DILUTE BEFORE USE. DISCARD UNUSED PORTION. PROTECT FROM LIGHT.

Each mL contains norepinephrine bitartrate USP, equivalent to 1 mg norepinephrine
base, sodium chloride for isotonicity with not more than 0.2 mg sodium metabisulfite
as antioxidant. The air in the vials has been displaced by nitrogen gas.

Do not use the solution if its color is pinkish or darker than slightly yellow or if it contains
a precipitate. Avoid contact with iron salts, alkalis, or oxidizing agents.