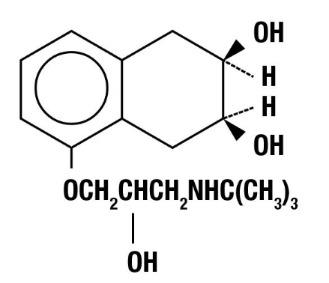 Nadolol specifically competes with beta-adrenergic receptor agonists for available beta receptor sites; it inhibits both the beta1 receptors located chiefly in cardiac muscle and the beta2 receptors located chiefly in the bronchial and vascular musculature, inhibiting the chronotropic, inotropic, and vasodilator responses to beta-adrenergic stimulation proportionately. Nadolol has no intrinsic sympathomimetic activity and, unlike some other beta-adrenergic blocking agents, nadolol has little direct myocardial depressant activity and does not have an anesthetic-like membrane- stabilizing action. Animal and human studies show that nadolol slows the sinus rate and depresses AV conduction. In dogs, only minimal amounts of nadolol were detected in the brain relative to amounts in blood and other organs and tissues. Nadolol has low lipophilicity as determined by octanol/water partition coefficient, a characteristic of certain beta-blocking agents that has been correlated with the limited extent to which these agents cross the blood-brain barrier, their low concentration in the brain, and low incidence of CNS-related side effects.

Nadolol tablets are indicated for the long-term management of patients with angina pectoris.

Nadolol tablets are indicated for the treatment of hypertension, to lower blood pressure. Lowering blood pressure reduces the risk of fatal and nonfatal cardiovascular events, primarily strokes and myocardial infarctions. These benefits have been seen in controlled trials of antihypertensive drugs from a wide variety of pharmacologic classes including the class to which this drug principally belongs. There are no controlled trials demonstrating risk reduction with nadolol tablets.

Nadolol tablets may be used alone or in combination with other antihypertensive agents, especially thiazide-type diuretics.

In animal reproduction studies with nadolol, evidence of embryo- and fetotoxicity was found in rabbits, but not in rats or hamsters, at doses 5 to 10 times greater (on a mg/kg basis) than the maximum indicated human dose. No teratogenic potential was observed in any of these species. There are no adequate and well-controlled studies in pregnant women. Nadolol should be used during pregnancy only if the potential benefit justifies the potential risk to the fetus. Neonates whose mothers are receiving nadolol at parturition have exhibited bradycardia, hypoglycemia, and associated symptoms.

Bronchospasm has been reported in approximately 1 of 1,000 patients (see CONTRAINDICATIONS and WARNINGS).

Nausea, diarrhea, abdominal discomfort, constipation, vomiting, indigestion, anorexia, bloating, and flatulence have been reported in 1 to 5 of 1,000 patients.

Pemphigoid rash; hypertensive reaction in patients with pheochromocytoma; sleep disturbances; Peyronie's disease. The oculomucocutaneous syndrome associated with the beta-blocker practolol has not been reported with nadolol.

Nadolol can be removed from the general circulation by hemodialysis. In addition to gastric lavage, the following measures should be employed, as appropriate. In determining the duration of corrective therapy, note must be taken of the long duration of the effect of nadolol.

The usual initial dose is 40 mg nadolol tablets once daily. Dosage may be gradually increased in 40 to 80 mg increments at 3 to 7 day intervals until optimum clinical response is obtained or there is pronounced slowing of the heart rate. The usual maintenance dose is 40 or 80 mg administered once daily. Doses up to 160 or 240 mg administered once daily may be needed. The usefulness and safety in angina pectoris of dosage exceeding 240 mg per day have not been established. If treatment is to be discontinued, reduce the dosage gradually over a period of one to two weeks (see WARNINGS).

Nadolol Tablets, USP 20 mg are supplied as white to off-white, round tablets debossed with “AA” & “76” separated by a score mark on one side and plain on the other side.

Nadolol Tablets, USP 40 mg are supplied as white to off-white, round tablets debossed with “AA” & “79” separated by a score mark on one side and plain on the other side.

Nadolol Tablets, USP 80 mg are supplied as white to off-white, round tablets debossed with “AA” & “99” separated by a score mark on one side and plain on the other side.