Plan B® One-Step is a progestin-only emergency contraceptive indicated for prevention of pregnancy following unprotected intercourse or a known or suspected contraceptive failure. To obtain optimal efficacy, the tablet should be taken as soon as possible within 72 hours of intercourse.

Plan B One-Step is available only by prescription for women younger than age 17 years, and available over the counter for women 17 years and older.

Plan B One-Step is not indicated for routine use as a contraceptive.

If vomiting occurs within two hours of taking the tablet, consideration should be given to repeating the dose.

The Plan B One-Step tablet is supplied as an almost white, round tablet containing 1.5 mg of levonorgestrel and is marked G00 on one side.

Plan B One-Step is contraindicated for use in the case of known or suspected pregnancy.

Ectopic pregnancies account for approximately 2% of all reported pregnancies. Up to 10% of pregnancies reported in clinical studies of routine use of progestin-only contraceptives are ectopic.

A history of ectopic pregnancy is not a contraindication to use of this emergency contraceptive method. Healthcare providers, however, should consider the possibility of an ectopic pregnancy in women who become pregnant or complain of lower abdominal pain after taking Plan B One-Step. A follow-up physical or pelvic examination is recommended if there is any doubt concerning the general health or pregnancy status of any woman after taking Plan B One-Step.

Plan B One-Step is not effective in terminating an existing pregnancy.

If there is a delay in the onset of expected menses beyond 1 week, consider the possibility of pregnancy.

Plan B One-Step does not protect against HIV infection (AIDS) or other sexually transmitted infections (STIs).

The following adverse reactions have been identified during post-approval use of Plan B (2 doses of 0.75 mg levonorgestrel taken 12 hours apart). Because these reactions are reported voluntarily from a population of uncertain size, it is not always possible to reliably estimate their frequency or establish a causal relationship to drug exposure.

Significant changes (increase or decrease) in the plasma levels of the progestin have been noted in some cases of co-administration with HIV protease inhibitors or with non-nucleoside reverse transcriptase inhibitors.

Consult the labeling of all concurrently used drugs to obtain further information about interactions with progestin-only pills or the potential for enzyme alterations.

Many studies have found no harmful effects on fetal development associated with long-term use of contraceptive doses of oral progestins. The few studies of infant growth and development that have been conducted with progestin-only pills have not demonstrated significant adverse effects.

In general, no adverse effects of progestin-only pills have been found on breastfeeding performance or on the health, growth, or development of the infant. However, isolated post-marketing cases of decreased milk production have been reported. Small amounts of progestins pass into the breast milk of nursing mothers taking progestin-only pills for long-term contraception, resulting in detectable steroid levels in infant plasma.

This product is not intended for use in postmenopausal women.

No formal studies were conducted to evaluate the effect of hepatic disease on the disposition of Plan B One-Step.

No formal studies were conducted to evaluate the effect of renal disease on the disposition of Plan B One-Step.

Levonorgestrel is not a controlled substance. There is no information about dependence associated with the use of Plan B One-Step.

There are no data on overdosage of Plan B One-Step, although the common adverse event of nausea and associated vomiting may be anticipated.

Levonorgestrel has a molecular weight of 312.45, and the following structural and molecular formulas:

Emergency contraceptive pills are not effective if a woman is already pregnant. Plan B  One-Step is believed to act as an emergency contraceptive principally by preventing ovulation or fertilization (by altering tubal transport of sperm and/or ova). In addition, it may inhibit implantation (by altering the endometrium). It is not effective once the process of implantation has begun.

Following a single dose administration of Plan B One-Step in 30 women under fasting conditions, maximum plasma concentrations of levonorgestrel of 19.1 ng/mL were reached at 1.7 hours. See Table 2.

Effect of Food: The effect of food on the rate and the extent of levonorgestrel absorption following single oral administration of Plan B One-Step has not been evaluated.

The apparent volume of distribution of levonorgestrel is reported to be approximately 1.8 L/kg. It is about 97.5 to 99% protein-bound, principally to sex hormone binding globulin (SHBG) and, to a lesser extent, serum albumin.

This product is not intended for use in the premenarcheal population, and pharmacokinetic data are not available for this population.

This product is not intended for use in postmenopausal women, and pharmacokinetic data are not available for this population.

No formal studies were conducted to evaluate the effect of hepatic disease on the disposition of Plan B One-Step.

No formal studies were conducted to evaluate the effect of renal disease on the disposition of Plan B One-Step.

Carcinogenicity: There is no evidence of increased risk of cancer with short-term use of progestins. There was no increase in tumorgenicity following administration of levonorgestrel to rats for 2 years at approximately 5 µg/day, to dogs for 7 years at up to 0.125 mg/kg/day, or to rhesus monkeys for 10 years at up to 250 µg/kg/day. In another 7 year dog study, administration of levonorgestrel at 0.5 mg/kg/day did increase the number of mammary adenomas in treated dogs compared to controls. There were no malignancies.

Genotoxicity: Levonorgestrel was not found to be mutagenic or genotoxic in the Ames Assay, in vitro mammalian culture assays utilizing mouse lymphoma cells and Chinese hamster ovary cells, and in an in vivo micronucleus assay in mice.

Fertility: There are no irreversible effects on fertility following cessation of exposures to levonorgestrel or progestins in general.

A double-blind, randomized, multicenter, multinational study evaluated and compared the efficacy and safety of three different regimens for emergency contraception. Subjects were enrolled at 15 sites in 10 countries; the racial/ethnic characteristics of the study population overall were 54% Chinese, 34% Caucasian, and 12% Black or Asian (other than Chinese). 2,381 healthy women with a mean age of 27 years, who needed emergency contraception within 72 hours of unprotected intercourse were involved and randomly allocated into one of the two levonorgestrel groups. A single dose of 1.5 mg of levonorgestrel (Plan B One-Step) was administered to women allocated into group 1. Two doses of 0.75 mg levonorgestrel 12 hours apart (Plan B) were administered to women in group 2. In the Plan B One-Step group, 16 pregnancies occurred in 1,198 women and in the Plan B group, 20 pregnancies occurred in 1,183 women. The number of pregnancies expected in each group was calculated based on the timing of intercourse with regard to each woman’s menstrual cycle. Among women receiving Plan B One-Step, 84% of expected pregnancies were prevented and among those women taking Plan B, 79% of expected pregnancies were prevented. The expected pregnancy rate of 8% (with no contraceptive use) was reduced to approximately 1% with Plan B One-Step.

Emergency contraceptives are not as effective as routine contraception since their failure rate, while low based on a single use, would accumulate over time with repeated use [see INDICATIONS AND USAGE (1)].

In the clinical study, bleeding disturbances were the most common adverse event reported after taking the levonorgestrel-containing regimens. More than half of the women had menses within two days of the expected time; however, 31% of women experienced change in their bleeding pattern during the study period; 4.5% of women had menses more than 7 days after the expected time.

The Plan B One-Step (levonorgestrel) tablet 1.5 mg is available in a PVC/aluminum foil blister package. The tablet is almost white, round, and marked G00 on one side. 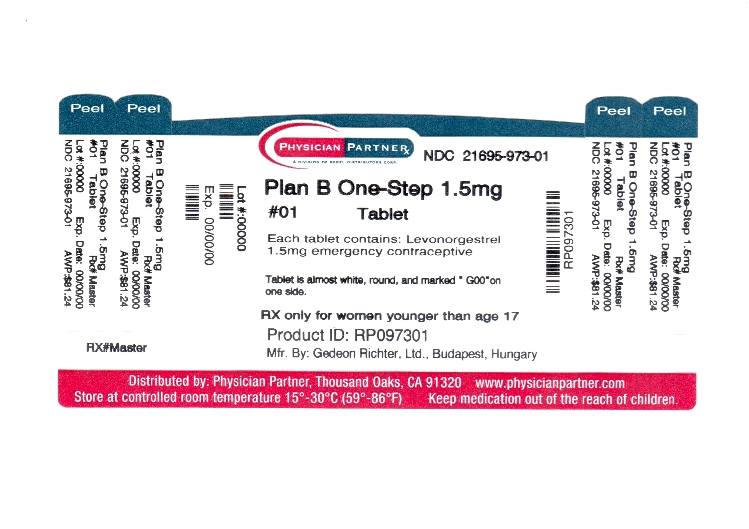 FOR CLINIC USE ONLY. NOT FOR RESALE.

Not for regular birth control.

Rx only for women
younger than age 17

•Take as soon as possible within 72 hours (3 days) after unprotected sex. The sooner you take it, the better Plan B One-Step® will work.

•Not for regular birth control.
Plan B One-Step® should be used only in emergencies.

•Does not protect against HIV/AIDS or other STDs.

Use reduces chance of pregnancy after unprotected sex

Allergy alert: Do not use if you have ever had an allergic reaction to levonorgestrel

Sexually transmitted diseases (STDs) alert: This product does not protect against HIV/AIDS or other STDs

■ if you are already pregnant (because it will not work)

When using this product you may have

Keep out of reach of children. In case of overdose, get medical help or contact a Poison Control center right away.

■ take tablet as soon as possible within 72 hours (3 days) after unprotected sex. The sooner you take it the better it will work.

■ if you vomit within 2 hours of taking the medication, call a healthcare professional to find out if you should repeat the dose

■ this product is not recommended for regular birth control. It does not work as well as most other birth control methods used correctly.

■ this product works mainly by preventing ovulation (egg release). It may also prevent fertilization of a released egg (joining of sperm and egg) or attachment of a fertilized egg to the uterus (implantation).

■ when used correctly every time you have sex, latex condoms greatly reduce, but do not eliminate, the risk of pregnancy and the risk of catching or spreading HIV, the virus that causes AIDS. See condom labeling for additional STD information.

For more information or to speak to a healthcare professional,

Visit our Web site at www.PlanBOneStep.com