Nizatidine USP is a histamine H2-receptor antagonist. Chemically, it is N-[2-[[[2-[(dimethylamino)methyl]-4-thiazolyl]methyl]thio]ethyl]-N’-methyl-2-nitro-1,1-ethenediamine.

Nizatidine has the molecular formula C12H21N5O2S2 representing a molecular weight of 331.46. It is an off-white to buff crystalline solid that is soluble in water. Nizatidine has a bitter taste and mild sulfur-like odor.

Symptomatic response to nizatidine therapy does not preclude the presence of gastric malignancy.

Because nizatidine is excreted primarily by the kidney, dosage should be reduced in patients with moderate to severe renal insufficiency (see DOSAGE AND ADMINISTRATION).

In a 2-generation, perinatal and postnatal fertility study in rats, doses of nizatidine up to 650 mg/kg/day (about 17.5 times the recommended human dose based on body surface area) produced no adverse effects on the reproductive performance of parental animals or their progeny.


A variety of less common events were also reported; it was not possible to determine whether these were caused by nizatidine.

Hepatic: Hepatocellular injury, evidenced by elevated liver enzyme tests (SGOT [AST], SGPT [ALT], or alkaline phosphatase), occurred in some patients and was possibly or probably related to nizatidine. In some cases there was marked elevation of SGOT, SGPT enzymes (greater than 500 IU/L) and, in a single instance, SGPT was greater than 2,000 IU/L. The overall rate of occurrences of elevated liver enzymes and elevations to 3 times the upper limit of normal, however, did not significantly differ from the rate of liver enzyme abnormalities in placebo-treated patients. All abnormalities were reversible after discontinuation of nizatidine. Since market introduction, hepatitis and jaundice have been reported. Rare cases of cholestatic or mixed hepatocellular and cholestatic injury with jaundice have been reported with reversal of the abnormalities after discontinuation of nizatidine.

CNS: Rare cases of reversible mental confusion have been reported.

Endocrine: Clinical pharmacology studies and controlled clinical trials showed no evidence of antiandrogenic activity due to nizatidine. Impotence and decreased libido were reported with similar frequency by patients who received nizatidine and by those given placebo. Rare reports of gynecomastia occurred.

Integumental: Sweating and urticaria were reported significantly more frequently in nizatidine- than in placebo-treated patients. Rash and exfoliative dermatitis were also reported. Vasculitis has been reported rarely.

Body as a Whole: Serum sickness-like reactions have occurred rarely in conjunction with nizatidine use.

Genitourinary: Reports of impotence have occurred.

Other: Hyperuricemia unassociated with gout or nephrolithiasis was reported. Eosinophilia, fever, and nausea related to nizatidine administration have been reported.

Nizatidine Capsules USP, 150 mg are available as white opaque body and yellow opaque cap, imprinted “ 150” on the body and cap in black ink. They are available in bottles of 60 and 500.

Nizatidine Capsules USP, 300 mg are available as white opaque body and peach opaque cap, imprinted “ 300” on the body and cap in black ink. They are available in bottles of 30 and 100. 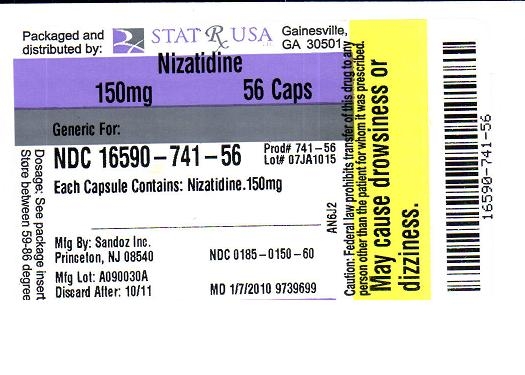