Neomycin and Polymyxin B Sulfates and Hydrocortisone OTIC Solution, USP

DESCRIPTION: Neomycin and Polymyxin B Sulfates and Hydrocortisone OTIC Solution, USP is a sterile antibacterial and anti-inflammatory solution for otic use. Each mL contains: neomycin sulfate equivalent to 3.5 mg neomycin base, polymyxin B sulfate equivalent to 10,000 polymyxin B units, and hydrocortisone 10 mg (1%). The vehicle contains potassium metabisulfite 0.1% (added as a preservative) and the inactive ingredients glycerin, propylene glycol, hydrochloric acid, and Water for Injection.

Neomycin sulfate is the sulfate salt of neomycin B and C, which are produced by the growth of Streptomyces fradiae Waksman (Fam. Streptomycetaceae). It has a potency equivalent of not less than 600 mcg of neomycin standard per mg, calculated on an anhydrous basis. The structural formulae are: 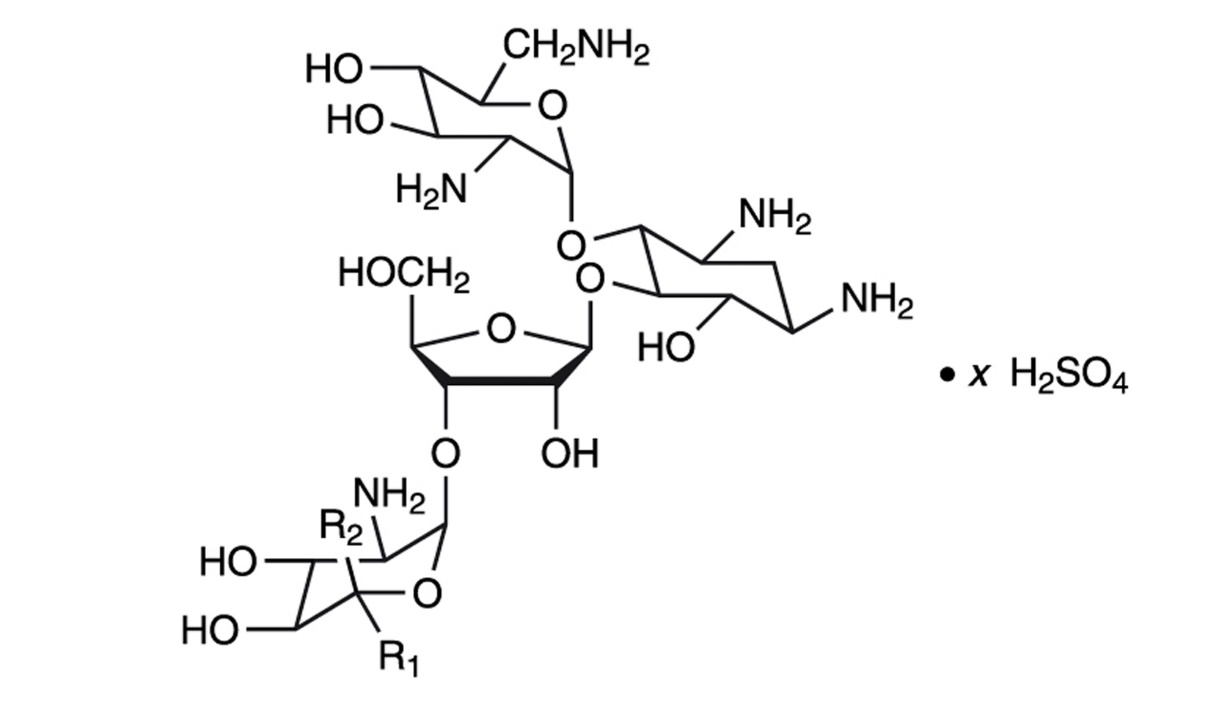 Polymyxin B sulfate is the sulfate salt of polymyxin B 1 and B 2, which are produced by the growth of Bacillus polymyxa (Prazmowski) Migula (Fam. Bacillaceae). It has a potency of not less than 6,000 polymyxin B units per mg, calculated on an anhydrous basis. The structural formulae are:

Hydrocortisone, 11β,17,21-trihydroxypregn-4-ene-3, 20-dione, is an anti-inflammatory hormone. Its structural formula is: 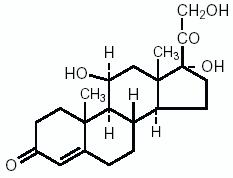 CLINICAL PHARMACOLOGY: Corticoids suppress the inflammatory response to a variety of agents and they may delay healing. Since corticoids may inhibit the body's defense mechanism against infection, a concomitant antimicrobial drug may be used when this inhibition is considered to be clinically significant in a particular case.

The anti-infective components in the combination are included to provide action against specific organisms susceptible to them. Neomycin sulfate and polymyxin B sulfate together are considered active against the following microorganisms: Staphylococcus aureus, Escherichia coli, Haemophilus influenzae, Klebsiella-Enterobacter species, Neisseria species, and Pseudomonas aeruginosa. This product does not provide adequate coverage against Serratia marcescens and streptococci, including Streptococcus pneumoniae.The relative potency of corticosteroids depends on the molecular structure, concentration, and release from the vehicle.

INDICATIONS AND USAGE: For the treatment of superficial bacterial infections of the external auditory canal caused by organisms susceptible to the action of the antibiotics.

CONTRAINDICATIONS: This product is contraindicated in those individuals who have shown hypersensitivity to any of its components.

This product should not be used if the external auditory canal disorder is suspected or known to be due to cutaneous viral infection (for example, herpes simplex virus or varicella zoster virus).

WARNINGS: Neomycin can induce permanent sensorineural hearing loss due to cochlear damage, mainly destruction of hair cells in the organ of Corti. The risk of ototoxicity is greater with prolonged use; therefore, duration of therapy should be limited to 10 consecutive days (see PRECAUTIONS: General).

Patients being treated with eardrops containing neomycin should be under close clinical observation. Due to its acidity which may cause burning and stinging, Neomycin and Polymyxin B Sulfates and Hydrocortisone OTIC Solution should not be used in any patients with a perforated tympanic membrane.

Neomycin sulfate may cause cutaneous sensitization. A precise incidence of hypersensitivity reactions (primarily skin rash) due to topical neomycin is not known. Discontinue this product promptly if sensitization or irritation occurs. When using neomycin-containing products to control secondary infection in the chronic dermatoses, such as chronic otitis externa or stasis dermatitis, it should be borne in mind that the skin in these conditions is more liable than is normal skin to become sensitized to many substances, including neomycin. The manifestation of sensitization to neomycin is usually a low-grade reddening with swelling, dry scaling, and itching; it may be manifest simply as a failure to heal. Periodic examination for such signs is advisable, and the patient should be told to discontinue the product if they are observed. These symptoms regress quickly on withdrawing the medication. Neomycin-containing applications should be avoided for the patient thereafter.

Contains potassium metabisulfite, a sulfite that may cause allergic-type reactions including anaphylactic symptoms and life-threatening or less severe asthmatic episodes in certain susceptible people. The overall prevalence of sulfite sensitivity in the general population is unknown and probably low. Sulfite sensitivity is seen more frequently in asthmatic than in nonasthmatic people.

PRECAUTIONS: General: As with other antibiotic preparations, prolonged use may result in overgrowth of nonsusceptible organisms, including fungi.

If the infection is not improved after 1 week, cultures and susceptibility tests should be repeated to verify the identity of the organism and to determine whether therapy should be changed.

Treatment should not be continued for longer than 10 days.

Allergic cross-reactions may occur which could prevent the use of any or all of the following antibiotics for the treatment of future infections: kanamycin; paromomycin; streptomycin; and possibly, gentamicin.

Information for Patients: Avoid contaminating the dropper with material from the ear, fingers, or other source. This caution is necessary if the sterility of the drops is to be preserved.

If sensitization or irritation occurs, discontinue use immediately and contact your physician.

Do not use in the eyes.

Laboratory Tests: Systemic effects of excessive levels of hydrocortisone may include a reduction in the number of circulating eosinophils and a decrease in urinary excretion of 17-hydroxycorticosteroids.

Pregnancy: Teratogenic Effects: Pregnancy Category C. Corticosteroids have been shown to be teratogenic in rabbits when applied topically at concentrations of 0.5% on days 6 to 18 of gestation and in mice when applied topically at a concentration of 15% on days 10 to 13 of gestation. There are no adequate and well-controlled studies in pregnant women. Corticosteroids should be used during pregnancy only if the potential benefit justifies the potential risk to the fetus.

Nursing Mothers: Hydrocortisone appears in human milk following oral administration of the drug. Since systemic absorption of hydrocortisone may occur when applied topically, caution should be exercised when Neomycin and Polymyxin B Sulfates and Hydrocortisone OTIC Solution is used by a nursing woman.

Geriatric Use: Clinical studies of Neomycin and Polymyxin B Sulfates and Hydrocortisone OTIC Solution did not include sufficient numbers of subjects aged 65 and over to determine whether they respond differently from younger subjects. Other reported clinical experience has not identified differences in responses between the elderly and younger patients.

ADVERSE REACTIONS: Neomycin occasionally causes skin sensitization. Ototoxicity and nephrotoxicity have also been reported (see WARNINGS). Adverse reactions have occurred with topical use of antibiotic combinations including neomycin and polymyxin B. Exact incidence figures are not available since no denominator of treated patients is available. The reaction occurring most often is allergic sensitization. In one clinical study, using a 20% neomycin patch, neomycin-induced allergic skin reactions occurred in two of 2,175 (0.09%) individuals in the general population. 2 In another study, the incidence was found to be approximately 1%. 3

DOSAGE AND ADMINISTRATION: Therapy with this product should be limited to 10 consecutive days.

The external auditory canal should be thoroughly cleansed and dried with a sterile cotton applicator.

For adults, four drops of the solution should be instilled into the affected ear 3 or 4 times daily. For infants and children, three drops are suggested because of the smaller capacity of the ear canal.

The patient should lie with the affected ear upward and then the drops should be instilled. This position should be maintained for 5 minutes to facilitate penetration of the drops into the ear canal.

Repeat, if necessary, for the opposite ear.

If preferred, a cotton wick may be inserted into the canal and then the cotton may be saturated with the solution.

HOW SUPPLIED: Bottle of 10 mL with sterilized dropper

* DROP-TAINER is a Registered trademark of Alcon Research, Ltd.