Cyproheptadine HCl USP, is an antihistaminic and antiserotonergic agent. Cyproheptadine hydrochloride USP is a white to slightly yellowish crystalline powder, with a molecular weight of 350.89, which is slightly soluble in water, freely soluble in methanol, sparingly soluble in alcohol, soluble in chloroform, and practically insoluble in ether. It is the sesquihydrate of 4-(5H dibenzo[a,d]cyclohepten-5-ylidene)-1-methylpiperidine hydrochloride. The molecular formula of the anhydrous salt is C21H21N•HCl and the structural formula of the anhydrous salt is:

After a single 4 mg oral dose of 14C-labelled cyproheptadine HCI in normal subjects, given as tablets, 2 to 20% of the radioactivity was excreted in the stools. Only about 34% of the stool radioactivity was unchanged drug, corresponding to less than 5.7% of the dose. At least 40% of the administered radioactivity was excreted in the urine. No detectable amounts of unchanged drug were present in the urine of patients on chronic 12 to 20 mg daily doses. The principle metabolite found in human urine has been identified as a quaternary ammonium glucuronide conjugate of cyproheptadine. Elimination is diminished in renal insufficiency.

Patients should be warned about engaging in activities requiring mental alertness and motor coordination, such as driving a car or operating machinery. Antihistamines are more likely to cause dizziness, sedation, and hypotension in elderly patients (see PRECAUTIONS, Geriatric Use).

Long-term carcinogenic studies have not been done with cyproheptadine. Cyproheptadine had no effect on fertility in a two-litter study in rats or a two generation study in mice at about 10 times the human dose.

Safety and effectiveness in pediatric patients below the age of two have not been established (see CONTRAINDICATIONS, Newborn or Premature Infants,and WARNINGS, Pediatric Patients).

If patient is unable to vomit, perform gastric lavage followed by activated charcoal. Isotonic or 1/2 isotonic saline is the lavage of choice. Precautions against aspiration must be taken especially in infants and children.

Saline cathartics, as milk of magnesia, by osmosis draw water into the bowel and, therefore, are valuable for their action in rapid dilution of bowel content. Stimulants should not be used.

The usual dose is 2 mg (1/2 tablet) two or three times a day, adjusted as necessary to the size and response of the patient. The dose is not to exceed 12 mg a day. 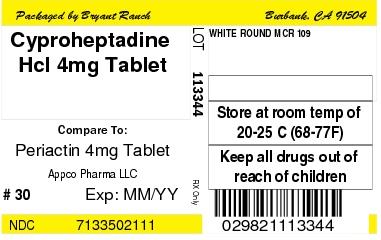