Prednisolone Sodium Phosphate Ophthalmic Solution, 1%, is a sterile solution for ophthalmic administration having the following composition: 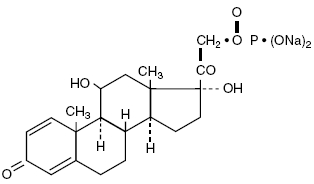 Prednisolone sodium phosphate causes inhibition of inflammatory response to inciting agents of mechanical, chemical, or immunological nature. No generally accepted explanation of this steroid property has been advanced.

Prednisolone Sodium Phosphate Ophthalmic Solution 1% or 1/8% is for the treatment of steroid responsive inflammatory conditions of the palpebral and bulbar conjunctiva, cornea, and anterior segment of the globe, such as allergic conjunctivitis, acne rosacea, superficial punctate keratitis, herpes zoster keratitis, iritis, cyclitis, selected infective conjunctivitis when the inherent hazard of steroid use is accepted to obtain an advisable diminution in edema and inflammation, corneal injury from chemical, radiation, or thermal burns, or penetration of foreign bodies.

The use of this preparation is contraindicated in the presence of:

3] Acute infectious stages of vaccinia, varicella and most other viral diseases of the cornea and conjunctiva.

4] Tuberculosis of the eye.

5] Hypersensitivity to a component of this medication.

The use of this preparation is always contraindicated after uncomplicated removal of a superficial corneal foreign body.

NOT FOR INJECTION INTO EYE - FOR TOPICAL USE ONLY

Prolonged use may result in elevated intraocular pressure and/or glaucoma, damage to the optic nerve, defects in visual acuity and fields of vision, posterior subcapsular cataract formation, or may aid in the establishment of secondary ocular infections from pathogens liberated from ocular tissues. In those diseases causing thinning of the cornea or sclera, perforation has been known to occur with the use of topical steroids. Acute purulent untreated infection of the eye may be masked or activity enhanced by presence of steroid medication. Viral, bacterial, and fungal infections of the cornea may be exacerbated by the application of steroids.

This drug is not effective in mustard gas keratitis and Sjögren’s keratoconjuncitivitis.

If irritation persists or develops, the patient should be advised to discontinue use and consult prescribing physician.

As fungal infections of the cornea are particularly prone to develop coincidentally with long-term steroid applications, fungus invasion must be suspected in any persistent corneal ulceration where a steroid has been used or is in use.

Intraocular pressure should be checked frequently.

Do not touch dropper tip to any surface as this may contaminate the solution.

The effect of prednisolone sodium phosphate on the later growth, development and functional maturation of the child is unknown.

Rarely, filtering blebs have been reported when topical steroids have been used following cataract surgery.

Rarely, stinging, or burning may occur.

Depending on the severity of inflammation, instill one or two drops of solution into the conjunctival sac up to every hour during the day and every two hours during the night as necessary as initial therapy.

When a favorable response is observed, reduce dosage to one drop every four hours.

Later, further reduction in dosage to one drop three to four times daily may suffice to control symptoms.

The duration of treatment will vary with the type of lesion and may extend from a few days to several weeks, according to therapeutic response. Relapses, more common in chronic active lesions than in self-limited conditions, usually respond to retreatment.

Prednisolone Sodium Phosphate Ophthalmic Solution USP, 1% is supplied in a plastic squeeze bottle with a controlled drop tip in the following sizes: 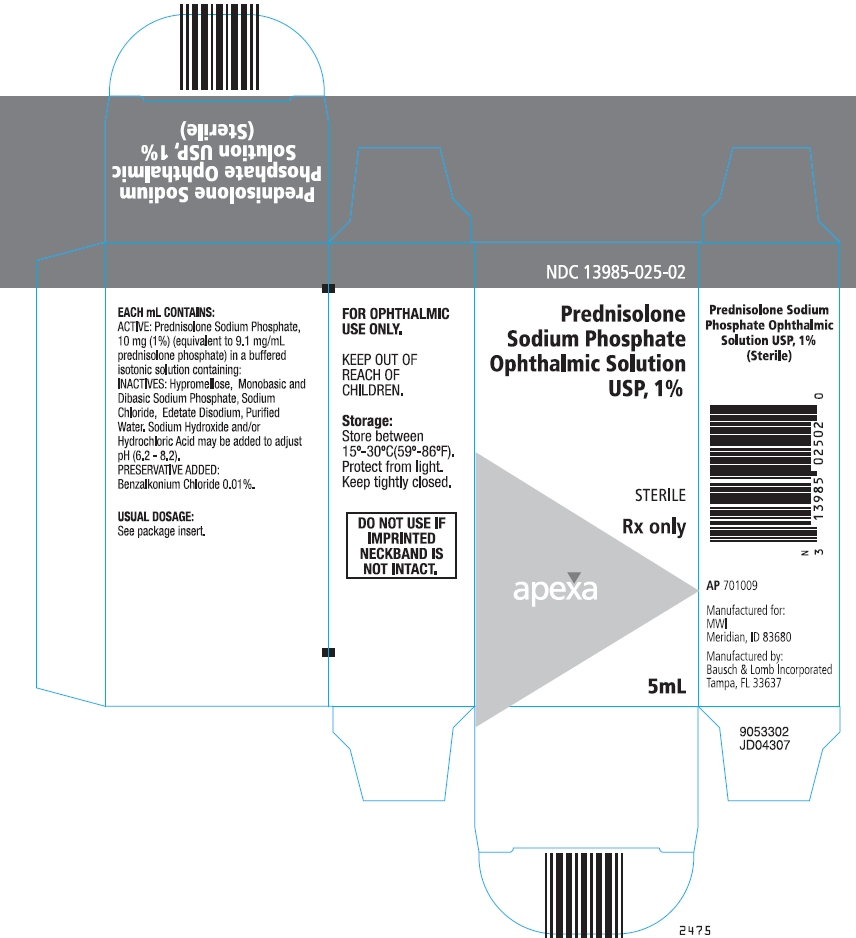