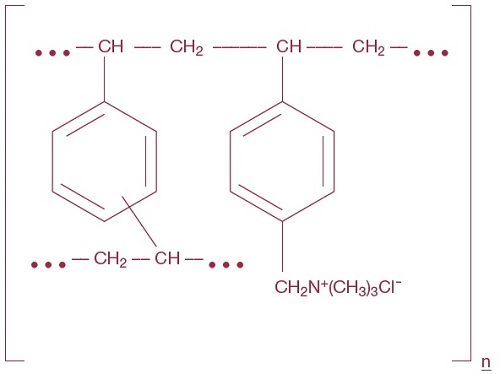 In a large, placebo-controlled, multi-clinic study, LRC-CPPT1, hypercholesterolemic subjects treated with cholestyramine resin had mean reduction in total and low-density lipoprotein cholesterol (LDL-C) which exceeded those for diet and placebo treatment by 7.2% and 10.4%, respectively. Over the seven-year study period the cholestyramine resin group experienced a 19% reduction (relative to the incidence in the placebo group) in the combined rate of coronary heart disease death plus non-fatal myocardial infarction (cumulative incidence of 7% cholestyramine resin and 8.6% placebo). The subjects included in the study were men aged 35 to 59 with serum cholesterol levels above 265 mg/dL and no previous history of heart disease. It is not clear to what extent these findings can be extrapolated to females and other segments of the hypercholesterolemic population. (see also PRECAUTIONS, Carcinogenesis, Mutagenesis, Impairment of Fertility).

The effect of intensive lipid-lowering therapy on coronary atherosclerosis has been assessed by arteriography in hyperlipidemic patients. In these randomized, controlled clinical trials, patients were treated for two to four years by either conventional measures (diet, placebo or in some cases low dose resin) or intensive combination therapy using diet plus colestipol (an anion exchange resin with a mechanism of action and an effect similar on serum lipids to that of Cholestyramine for Oral Suspension) plus either nicotinic acid or lovastatin. When compared to conventional measures, intensive lipid-lowering combination therapy significantly reduced the frequency of progression and increased the frequency of regression of coronary atherosclerotic lesions in patients with or at risk for coronary artery disease.

1) Cholestyramine for Oral Suspension, USP powder is indicated as adjunctive therapy to diet for the reduction of elevated serum cholesterol in patients with primary hypercholesterolemia (elevated low density lipoprotein [LDL] cholesterol) who do not respond adequately to diet. Cholestyramine for Oral Suspension, USP powder may be useful to lower LDL cholesterol in patients who also have hypertriglyceridemia, but it is not indicated where hypertriglyceridemia is the abnormality of most concern.

2) Cholestyramine for Oral Suspension, USP powder, is indicated for the relief of pruritus associated with partial biliary obstruction. Cholestyramine resin has been shown to have a variable effect on serum cholesterol in these patients. Patients with primary biliary cirrhosis may exhibit an elevated cholesterol as part of their disease.

Cholestyramine for Oral Suspension, USP powder is contraindicated in patients with complete biliary obstruction where bile is not secreted into the intestine and in those individuals who have shown hypersensitivity to any of its components.

Inform your physician if you are pregnant or plan to become pregnant or are breast-feeding. Drink plenty of fluids and mix each 9 gram dose of Cholestyramine for Oral Suspension USP powder in at least 2 to 6 ounces of fluid before taking. Sipping or holding the resin suspension in the mouth for prolonged periods may lead to changes in the surface of the teeth resulting in discoloration, erosion of enamel or decay; good oral hygiene should be maintained.

Cholestyramine resin may delay or reduce the absorption of concomitant oral medication such as phenylbutazone, warfarin, thiazide diuretics (acidic) or propranolol (basic), as well as tetracycline, penicillin G, phenobarbital, thyroid and thyroxine preparations, estrogens and progestins and digitalis. Interference with the absorption of oral phosphate supplements has been observed with another positivelycharged bile acid sequestrant. Cholestyramine resin may interfere with the pharmacokinetics of drugs that undergo enterohepatic circulation. The discontinuance of cholestyramine resin could pose a hazard to health if a potentially toxic drug such as digitalis has been titrated to a maintenance level while the patient was taking cholestyramine resin.

The relevance of this laboratory observation from studies in rats to the clinical use of cholestyramine resin is not known. In the LRCCPPT study referred to above, the total incidence of fatal and nonfatal neoplasms was similar in both treatment groups. When the many different categories of tumors are examined, various alimentary system cancers were somewhat more prevalent in the cholestyramine group. The small numbers and the multiple categories prevent conclusions from being drawn. However, in view of the fact that cholestyramine resin is confined to the GI tract and not absorbed and in light of the animal experiments referred to above, a six-year post-trial follow-up of the LRC-CPPT5 patient population has been completed (a total of 13.4 years of in-trial plus post-trial follow-up) and revealed no significant difference in the incidence of cause-specific mortality or cancer morbidity between cholestyramine and placebo treated patients.

Although an optimal dosage schedule has not been established, standard texts(6,7) list a usual pediatric dose of 240 mg/kg/day of anhydrous cholestyramine resin in two to three divided doses, normally not to exceed 8 g/day with dose titration based on response and tolerance.

In calculating pediatric dosages, 44.4 mg of anhydrous cholestyramine resin are contained in 100 mg of Cholestyramine for Oral Suspension USP.

Preliminary evidence suggests that the lipid-lowering effects of cholestyramine on total and LDL-cholesterol are enhanced when combined with a HMG-COA reductase inhibitor, e.g., pravastatin, lovastatin, simvastatin and fluvastatin. Additive effects on LDL-cholesterol are also seen with combined nicotinic acid/cholestyramine therapy. See PRECAUTIONS, Drug Interactions for recommendations on administering concomitant therapy.

The color of Cholestyramine for Oral Suspension, USP powder may vary somewhat from batch to batch but this variation does not affect the performance of the product. Place the contents of one single-dose pouch or one level scoopful of Cholestyramine for Oral Suspension, USP powder in a glass or cup. Add at least 2 to 3 ounces of water or the beverage of your choice. Stir to a uniform consistency.

Cholestyramine for Oral Suspension, USP powder may also be mixed with highly fluid soups or pulpy fruits with a high moisture content such as applesauce or crushed pineapple. 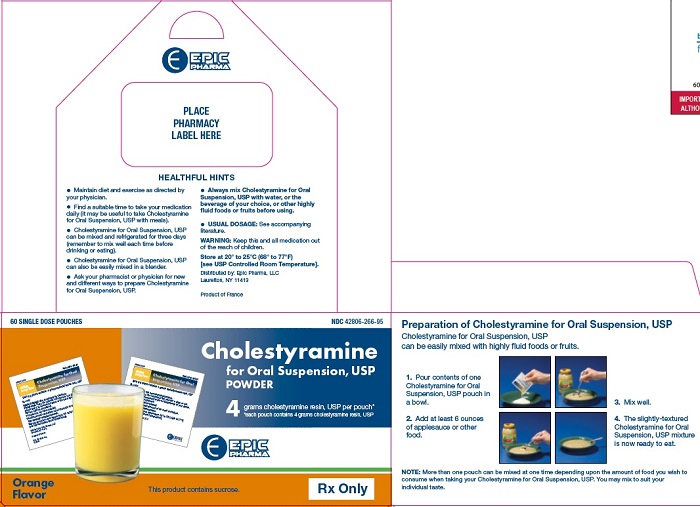