FOR ADDITIVE USE ONLY AFTER DILUTION IN INTRAVENOUS FLUIDS.

Sodium Acetate Injection, USP (4 mEq per mL) is a sterile, nonpyrogenic, concentrated solution of sodium acetate in water for injection. The solution is administered after dilution by the intravenous route as an electrolyte replenisher. It must not be administered undiluted. Each mL contains: 328 mg sodium acetate (anhydrous) which provides 4 mEq each of sodium (Na +) and acetate (CH 3COO -). The solution contains no bacteriostat, antimicrobial agent or added buffer. The pH may have been adjusted with glacial acetic acid to 6.5 (6.0 to 7.0). The osmolar concentration is 8 mOsmol/mL (calc); specific gravity 1.1511.

The solution is intended as an alternative to sodium chloride to provide sodium ion (Na +) for addition to large volume infusion fluids for intravenous use.

A Pharmacy Bulk Package is a container of a sterile preparation for parenteral use that contains many single doses. The contents are intended for use in a pharmacy admixture program and are restricted to the preparation of admixtures for intravenous infusion.

Sodium is the principal cation of extracellular fluid. It comprises more than 90% of total cations at its normal plasma concentration of approximately 140 mEq/L. The sodium ion exerts a primary role in controlling total body water and its distribution.

Acetate (CH 3COO -) is a hydrogen ion acceptor. It also serves as an alternate source of bicarbonate (HCO 3-) by metabolic conversion in the liver. This conversion has been shown to proceed readily, even in the presence of severe liver disease.

Sodium Acetate Injection, USP (4 mEq per mL) is indicated as a source of sodium for addition to large volume intravenous fluids to prevent or correct hyponatremia in patients with restricted or no oral intake. It is also useful as an additive for preparing specific intravenous fluid formulas when the needs of the patient cannot be met by standard electrolyte or nutrient solutions.

Sodium Acetate Injection, USP (4 mEq per mL) is contraindicated in patients with hypernatremia or fluid retention.

Sodium Acetate Injection, USP (4 mEq per mL) must be diluted before use.

Caution should be exercised in administering sodium-containing solutions to patients with severe renal function impairment, cirrhosis, cardiac failure or other edematous or sodium-retaining states, as well as in patients with oliguria or anuria.

Safety and effectiveness have been established in the age groups infant to adolescent.

An evaluation of current literature revealed no clinical experience identifying differences in response between elderly and younger patients. In general, dose selection for an elderly patient should be cautious, usually starting at the low end of the dosing range, reflecting the greater frequency of decreased hepatic, renal, or cardiac function, and of concomitant disease or other drug therapy.

Sodium Acetate Injection, USP (4 mEq per mL) is administered intravenously only after dilution in a larger volume of fluid. The dose and rate of administration are dependent upon the individual needs of the patient. Serum sodium should be monitored as a guide to dosage. Using aseptic technique, transfer the desired amount to other intravenous fluids to provide the appropriate number of milliequivalents (mEq) of sodium acetate.

Sodium Acetate Injection, USP (4 mEq per mL) in the Pharmacy Bulk Package is designed for use with manual, gravity flow operations and automated compounding devices for preparing intravenous nutritional admixtures. Admixtures must be stored under refrigeration and used within 24 hours after compounding.

Parenteral drug products should be inspected visually for particulate matter and discoloration prior to administration (see PRECAUTIONS).

The Pharmacy Bulk Package is for use in the Pharmacy Admixture Service only in a laminar flow hood. It should be inserted into the ring sling (plastic hanging device) provided and suspended as a unit in the laminar flow hood. The container closure should be penetrated only one time utilizing a suitable sterile dispensing set which allows measured distribution of the contents. Swab vial stopper with an antiseptic solution. Insert the dispensing set into the vial using aseptic technique (see graphic illustration below).

Once the sterile dispensing set has been inserted into the container, withdrawal of the contents should be accomplished without delay. However, if this is not possible, a maximum time of 4 hours from the initial entry may be allowed to complete fluid aliquoting/transferring operations. Discard the container no later than 4 hours after initial closure puncture.

Do not administer unless solution is clear and seal is intact.

Sodium Acetate Injection, USP is packaged in a pharmacy bulk package vial, 20 vials per tray, and is available as follows:

NOT FOR DIRECT INFUSION 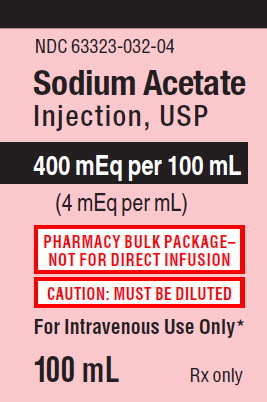 NOT FOR DIRECT INFUSION 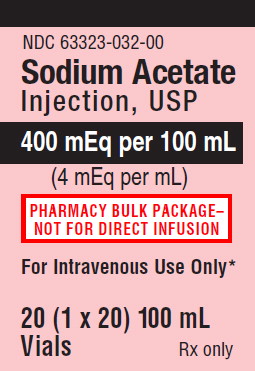