Gallbladder stone dissolution with ursodiol treatment requires months of therapy. Complete dissolution does not occur in all patients and recurrence of stones within 5 years has been observed in up to 50% of patients who do dissolve their stones on bile acid therapy. Patients should be carefully selected for therapy with ursodiol, and alternative therapies should be considered.

Ursodiol is a bile acid available as 300 mg capsules suitable for oral administration. Ursodiol, USP (ursodeoxycholic acid), is a naturally occurring bile acid found in small quantities in normal human bile and in the biles of certain other mammals. It is a bitter-tasting, white powder freely soluble in ethanol, methanol, and glacial acetic acid; sparingly soluble in chloroform; slightly soluble in ether; and insoluble in water. The chemical name for ursodiol is 3α,7β-Dihydroxy-5β-cholan-24-oic acid (C24H40O4). Ursodiol, USP has a molecular weight of 392.57. Its structure is shown below: 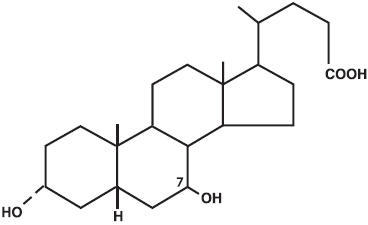 About 90% of a therapeutic dose of ursodiol is absorbed in the small bowel after oral administration. After absorption, ursodiol enters the portal vein and undergoes efficient extraction from portal blood by the liver (i.e., there is a large "first-pass" effect) where it is conjugated with either glycine or taurine and is then secreted into the hepatic bile ducts. Ursodiol in bile is concentrated in the gallbladder and expelled into the duodenum in gallbladder bile via the cystic and common ducts by gallbladder contractions provoked by physiologic responses to eating. Only small quantities of ursodiol appear in the systemic circulation and very small amounts are excreted into urine. The sites of the drug's therapeutic actions are in the liver, bile, and gut lumen.

Lithocholic acid causes cholestatic liver injury and can cause death from liver failure in certain species unable to form sulfate conjugates. Lithocholic acid is formed by 7-dehydroxylation of the dihydroxy bile acids (ursodiol and chenodiol) in the gut lumen. The 7-dehydroxylation reaction appears to be alpha-specific, i.e., chenodiol is more efficiently 7-dehydroxylated than ursodiol and, for equimolar doses of ursodiol and chenodiol, levels of lithocholic acid appearing in bile are lower with the former. Man has the capacity to sulfate lithocholic acid. Although liver injury has not been associated with ursodiol therapy, a reduced capacity to sulfate may exist in some individuals, but such a deficiency has not yet been clearly demonstrated.

With repeated dosing, bile ursodeoxycholic acid concentrations reach a steady state in about 3 weeks. Although insoluble in aqueous media, cholesterol can be solubilized in at least two different ways in the presence of dihydroxy bile acids. In addition to solubilizing cholesterol in micelles, ursodiol acts by an apparently unique mechanism to cause dispersion of cholesterol as liquid crystals in aqueous media. Thus, even though administration of high doses (e.g., 15 - 18 mg/kg/day) does not result in a concentration of ursodiol higher than 60% of the total bile acid pool, ursodiol-rich bile effectively solubilizes cholesterol. The overall effect of ursodiol is to increase the concentration level at which saturation of cholesterol occurs.

The various actions of ursodiol combine to change the bile of patients with gallstones from cholesterol-precipitating to cholesterol¬solubilizing, thus resulting in bile conducive to cholesterol stone dissolution.

After ursodiol dosing is stopped, the concentration of the bile acid in bile falls exponentially, declining to about 5% - 10% of its steady-state level in about 1 week.

Complete dissolution was observed in 81% of patients with stones up to 5 mm in diameter. Age, sex, weight, degree of obesity, and serum cholesterol level are not related to the chance of stone dissolution with ursodiol.

Two placebo-controlled, multicenter, double-blind, randomized, parallel group trials in a total of 1,316 obese patients were undertaken to evaluate ursodiol in the prevention of gallstone formation in obese patients undergoing rapid weight loss. The first trial consisted of 1,004 obese patients with a body mass index (BMI) ≥ 38 who underwent weight loss induced by means of a very low calorie diet for a period of 16 weeks. An intent-to-treat analysis of this trial showed that gallstone formation occurred in 23% of the placebo group, while those patients on 300, 600, or 1200 mg/day of ursodiol experienced a 6%, 3%, and 2% incidence of gallstone formation, respectively. The mean weight loss for this 16-week trial was 47 lb for the placebo group, and 47, 48, and 50 lb for the 300, 600, and 1200 mg/day ursodiol groups, respectively.

The second trial consisted of 312 obese patients (BMI ≥ 40) who underwent rapid weight loss through gastric bypass surgery. The trial drug treatment period was for 6 months following this surgery. Results of this trial showed that gallstone formation occurred in 23% of the placebo group, while those patients on 300, 600, or 1200 mg/day of ursodiol experienced a 9%, 1%, and 5% incidence of gallstone formation, respectively. The mean weight loss for this 6-month trial was 64 lb for the placebo group, and 67, 74, and 72 lb for the 300, 600, and 1200 mg/day ursodiol groups, respectively.

Watchful waiting has the advantage that no therapy may ever be required. For patients with silent or minimally symptomatic stones, the rate of development of moderate-to-severe symptoms or gallstone complications is estimated to be between 2% and 6% per year, leading to a cumulative rate of 7% - 27% in 5 years. Presumably the rate is higher for patients already having symptoms.

For patients with symptomatic gallstones, surgery offers the advantage of immediate and permanent stone removal, but carries a high risk in some patients. About 5% of cholecystectomized patients have residual symptoms or retained common duct stones. The spectrum of surgical risk varies as a function of age and the presence of disease other than cholelithiasis.

Ursodiol therapy has not been associated with liver damage. Lithocholic acid, a naturally occurring bile acid, is known to be a liver-toxic metabolite. This bile acid is formed in the gut from ursodiol less efficiently and in smaller amounts than that seen from chenodiol. Lithocholic acid is detoxified in the liver by sulfation and, although man appears to be an efficient sulfater, it is possible that some patients may have a congenital or acquired deficiency in sulfation, thereby predisposing them to lithocholate-induced liver damage.

Abnormalities in liver enzymes have not been associated with ursodiol therapy and, in fact, ursodiol has been shown to decrease liver enzyme levels in liver disease. However, patients given ursodiol should have SGOT (AST) and SGPT (ALT) measured at the initiation of therapy and thereafter as indicated by the particular clinical circumstances.

Bile acid sequestering agents such as cholestyramine and colestipol may interfere with the action of ursodiol by reducing its absorption. Aluminum-based antacids have been shown to absorb bile acids in vitro and may be expected to interfere with ursodiol in the same manner as the bile acid sequestering agents. Estrogens, oral contraceptives, and clofibrate (and perhaps other lipid-lowering drugs) increase hepatic cholesterol secretion, and encourage cholesterol gallstone formation and hence may counteract the effectiveness of ursodiol.

Ursodeoxycholic acid was tested in 2-year oral carcinogenicity studies in CD-1 mice and Sprague-Dawley rats at daily doses of 50, 250, and 1000 mg/kg/day. It was not tumorigenic in mice. In the rat study, it produced statistically significant dose-related increased incidences of pheochromocytomas of adrenal medulla in males (p=0.014, Peto trend test) and females (p=0.004, Peto trend test). A 78-week rat study employing intrarectal instillation of lithocholic acid and tauro-deoxycholic acid, metabolites of ursodiol and chenodiol, has been conducted. These bile acids alone did not produce any tumors. A tumor-promoting effect of both metabolites was observed when they were co-administered with a carcinogenic agent. Results of epidemiologic studies suggest that bile acids might be involved in the pathogenesis of human colon cancer in patients who had undergone a cholecystectomy, but direct evidence is lacking. Ursodiol is not mutagenic in the Ames test. Dietary administration of lithocholic acid to chickens is reported to cause hepatic adenomatous hyperplasia.

Reproduction studies have been performed in rats and rabbits with ursodiol doses up to 200-fold the therapeutic dose and have revealed no evidence of impaired fertility or harm to the fetus at doses of 20- to 100-fold the human dose in rats and at 5-fold the human dose (highest dose tested) in rabbits. Studies employing 100- to 200-fold the human dose in rats have shown some reduction in fertility rate and litter size. There have been no adequate and well-controlled studies of the use of ursodiol in pregnant women, but inadvertent exposure of 4 women to therapeutic doses of the drug in the first trimester of pregnancy during the ursodiol trials led to no evidence of effects on the fetus or newborn baby. Although it seems unlikely, the possibility that ursodiol can cause fetal harm cannot be ruled out; hence, the drug is not recommended for use during pregnancy.

The safety and effectiveness of ursodiol in pediatric patients have not been established.

In worldwide clinical studies of ursodiol, approximately 14% of subjects were over 65 years of age (approximately 3% were over 75 years old). In a subgroup analysis of existing clinical trials, patients greater than 56 years of age did not exhibit statistically significantly different complete dissolution rates from the younger population. No age-related differences in safety and effectiveness were found. Other reported clinical experience has not identified differences in response in elderly and younger patients. However, small differences in efficacy and greater sensitivity of some elderly individuals taking ursodiol cannot be ruled out. Therefore, it is recommended that dosing proceed with caution in this population.

Neither accidental nor intentional overdosing with ursodiol has been reported. Doses of ursodiol in the range of 16 - 20 mg/kg/day have been tolerated for 6 - 37 months without symptoms by 7 patients. The LD50 for ursodiol in rats is over 5000 mg/kg given over 7 - 10 days and over 7500 mg/kg for mice. The most likely manifestation of severe overdose with ursodiol would probably be diarrhea, which should be treated symptomatically.

The recommended dose for ursodiol treatment of radiolucent gallbladder stones is 8 - 10 mg/kg/day given in 2 or 3 divided doses. Ultrasound images of the gallbladder should be obtained at 6-month intervals for the first year of ursodiol therapy to monitor gallstone response. If gallstones appear to have dissolved, ursodiol therapy should be continued and dissolution confirmed on a repeat ultrasound examination within 1 - 3 months. Most patients who eventually achieve complete stone dissolution will show partial or complete dissolution at the first on-treatment reevaluation. If partial stone dissolution is not seen by 12 months of ursodiol therapy, the likelihood of success is greatly reduced.

Ursodiol Capsules USP, 300 mg are #0 capsules with a pink opaque cap, white opaque body, imprinted "ϵ503" in black ink on the cap and body, filled with white powder. They are supplied in bottles of 100.