Disulfiram should never be administered to a patient when he is in a state of alcohol intoxication, or without his full knowledge.
The physician should instruct relatives accordingly.

Disulfiram is an alcohol antagonist drug.

Disulfiram produces a sensitivity to alcohol which results in a highly unpleasant reaction when the patient under treatment ingests even small amounts of alcohol.

Accumulation of acetaldehyde in the blood produces a complex of highly unpleasant symptoms referred to hereinafter as the disulfiram-alcohol reaction. This reaction, which is proportional to the dosage of both disulfiram and alcohol, will persist as long as alcohol is being metabolized. Disulfiram does not appear to influence the rate of alcohol elimination from the body.

Disulfiram is absorbed slowly from the gastrointestinal tract and is eliminated slowly from the body. One (or even two) weeks after a patient has taken his last dose of disulfiram, ingestion of alcohol may produce unpleasant symptoms.

Prolonged administration of disulfiram does not produce tolerance; the longer a patient remains on therapy, the more exquisitely sensitive he becomes to alcohol.

Disulfiram is an aid in the management of selected chronic alcohol patients who want to remain in a state of enforced sobriety so that supportive and psychotherapeutic treatment may be applied to best advantage.

Disulfiram is not a cure for alcoholism. When used alone, without proper motivation and supportive therapy, it is unlikely that it will have any substantive effect on the drinking pattern of the chronic alcoholic.

Patients who are receiving or have recently received metronidazole, paraldehyde, alcohol, or alcohol-containing preparations, e.g., cough syrups, tonics and the like, should not be given disulfiram.

Disulfiram is contraindicated in the presence of severe myocardial disease or coronary occlusion, psychoses, and hypersensitivity to disulfiram or to other thiuram derivatives used in pesticides and rubber vulcanization.

The patient must be fully informed of the disulfiram-alcohol reaction. He must be strongly cautioned against surreptitious drinking while taking the drug, and he must be fully aware of the possible consequences. He should be warned to avoid alcohol in disguised forms, i.e., in sauces, vinegars, cough mixtures, and even in aftershave lotions and back rubs. He should also be warned that reactions may occur with alcohol up to 14 days after ingesting disulfiram.

The intensity of the reaction varies with each individual, but is generally proportional to the amounts of disulfiram and alcohol ingested. Mild reactions may occur in the sensitive individual when the blood alcohol concentration is increased to as little as 5 mg to 10 mg per 100 mL. Symptoms are fully developed at 50 mg per 100 mL, and unconsciousness usually results when the blood alcohol level reaches 125 mg to 150 mg.

The duration of the reaction varies from 30 to 60 minutes, to several hours in the more severe cases, or as long as there is alcohol in the blood.

Because of the possibility of an accidental disulfiram-alcohol reaction, disulfiram should be used with extreme caution in patients with any of the following conditions: diabetes mellitus, hypothyroidism, epilepsy, cerebral damage, chronic and acute nephritis, hepatic cirrhosis or insufficiency.

Patients with a history of rubber contact dermatitis should be evaluated for hypersensitivity to thiuram derivatives before receiving disulfiram (see CONTRAINDICATIONS).

It is suggested that every patient under treatment carry an Identification Card stating that he is receiving disulfiram and describing the symptoms most likely to occur as a result of the disulfiram-alcohol reaction. In addition, this card should indicate the physician or institution to be contacted in an emergency. (Cards may be obtained from Alvogen, Inc. upon request.)

Alcoholism may accompany or be followed by dependence on narcotics or sedatives. Barbiturates and disulfiram have been administered concurrently without untoward effects; the possibility of initiating a new abuse should be considered.

Hepatic toxicity including hepatic failure resulting in transplantation or death have been reported. Severe and sometimes fatal hepatitis associated with disulfiram therapy may develop even after many months of therapy. Hepatic toxicity has occurred in patients with or without prior history of abnormal liver function. Patients should be advised to immediately notify their physician of any early symptoms of hepatitis, such as fatigue, weakness, malaise, anorexia, nausea, vomiting, jaundice, or dark urine.

Baseline and follow-up liver function tests (10 to 14 days) are suggested to detect any hepatic dysfunction that may result with disulfiram therapy. In addition, a complete blood count and serum chemistries, including liver function tests, should be monitored.

Patients taking disulfiram tablets should not be exposed to ethylene dibromide or its vapors. This precaution is based on preliminary results of animal research currently in progress that suggest a toxic interaction between inhaled ethylene dibromide and ingested disulfiram resulting in a higher incidence of tumors and mortality in rats. A correlation between this finding and humans, however, has not been demonstrated.

Disulfiram appears to decrease the rate at which certain drugs are metabolized and therefore may increase the blood levels and the possibility of clinical toxicity of drugs given concomitantly.

DISULFIRAM SHOULD BE USED WITH CAUTION IN THOSE PATIENTS RECEIVING PHENYTOIN AND ITS CONGENERS, SINCE THE CONCOMITANT ADMINISTRATION OF THESE TWO DRUGS CAN LEAD TO PHENYTOIN INTOXICATION. PRIOR TO ADMINISTERING DISULFIRAM TO A PATIENT ON PHENYTOIN THERAPY, A BASELINE PHENYTOIN SERUM LEVEL SHOULD BE OBTAINED. SUBSEQUENT TO INITIATION OF DISULFIRAM THERAPY, SERUM LEVELS OF PHENYTOIN SHOULD BE DETERMINED ON DIFFERENT DAYS FOR EVIDENCE OF AN INCREASE OR FOR A CONTINUING RISE IN LEVELS. INCREASED PHENYTOIN LEVELS SHOULD BE TREATED WITH APPROPRIATE DOSAGE ADJUSTMENT.

It may be necessary to adjust the dosage of oral anticoagulants upon beginning or stopping disulfiram, since disulfiram may prolong prothrombin time.

Patients taking isoniazid when disulfiram is given should be observed for the appearance of unsteady gait or marked changes in mental status, the disulfiram should be discontinued if such signs appear.

In rats, simultaneous ingestion of disulfiram and nitrite in the diet for 78 weeks has been reported to cause tumors, and it has been suggested that disulfiram may react with nitrites in the rat stomach to form a nitrosamine, which is tumorigenic. Disulfiram alone in the rat's diet did not lead to such tumors. The relevance of this finding to humans is not known at this time.

The safe use of this drug in pregnancy has not been established. Therefore, disulfiram should be used during pregnancy only when, in the judgement of the physician, the probable benefits outweigh the possible risks.

It is not known whether this drug is excreted in human milk. Since many drugs are so excreted, disulfiram should not be given to nursing mothers.

A determination has not been made whether controlled clinical studies of disulfiram included sufficient numbers of subjects aged 65 and over to define a difference in response from younger subjects. Other reported clinical experience has not identified differences in responses between the elderly and younger patients. In general, dose selection for an elderly patient should be cautious, usually starting at the low end of the dosing range, reflecting the greater frequency of decreased hepatic, renal or cardiac function, and of concomitant disease or other drug therapy.

Multiple cases of hepatitis, including both cholestatic and fulminant hepatitis, as well as hepatic failure resulting in transplantation or death, have been reported with administration of disulfiram.

Occasional skin eruptions are, as a rule, readily controlled by concomitant administration of an antihistaminic drug.

In a small number of patients, a transient mild drowsiness, fatigability, impotence, headache, acneform eruptions, allergic dermatitis, or a metallic or garlic-like aftertaste may be experienced during the first two weeks of therapy. These complaints usually disappear spontaneously with the continuation of therapy, or with reduced dosage.

Psychotic reactions have been noted, attributable in most cases to high dosage, combined toxicity (with metronidazole or isoniazid), or to the unmasking of underlying psychoses in patients stressed by the withdrawal of alcohol.

No specific information is available on the treatment of overdosage with disulfiram. It is recommended that the physician contact the local Poison Control Center.

Disulfiram should never be administered until the patient has abstained from alcohol for at least 12 hours.

In the first phase of treatment, a maximum of 500 mg daily is given in a single dose for one to two weeks. Although usually taken in the morning, disulfiram may be taken on retiring by patients who experience a sedative effect. Alternatively, to minimize, or eliminate, the sedative effect, dosage may be adjusted downward.

Note:  Occasionally patients, while seemingly on adequate maintenance doses of disulfiram, report that they are able to drink alcoholic beverages with impunity and without any symptomatology. All appearances to the contrary, such patients must be presumed to be disposing of their tablets in some manner without actually taking them. Until such patients have been observed reliably taking their daily disulfiram tablets (preferably crushed and well mixed with liquid), it cannot be concluded that disulfiram is ineffective.

The daily, uninterrupted administration of disulfiram must be continued until the patient is fully recovered socially and a basis for permanent self-control is established. Depending on the individual patient, maintenance therapy may be required for months or even years.

During early experience with disulfiram, it was thought advisable for each patient to have at least one supervised alcohol-drug reaction. More recently, the test reaction has been largely abandoned. Furthermore, such a test reaction should never be administered to a patient over 50 years of age. A clear, detailed and convincing description of the reaction is felt to be sufficient in most cases.

However, where a test reaction is deemed necessary, the suggested procedure is as follows:
After the first one to two weeks' therapy with 500 mg daily, a drink of 15 mL (1/2 oz) of 100 proof whiskey, or equivalent, is taken slowly. This test dose of alcoholic beverage may be repeated once only, so that the total dose does not exceed 30 mL (1 oz) of whiskey. Once a reaction develops, no more alcohol should be consumed. Such tests should be carried out only when the patient is hospitalized, or comparable supervision and facilities, including oxygen, are available.

In severe reactions, whether caused by an excessive test dose or by the patient's unsupervised ingestion of alcohol, supportive measures to restore blood pressure and treat shock should be instituted. Other recommendations include: oxygen, carbogen (95% oxygen and 5% carbon dioxide), vitamin C intravenously in massive doses (1 g) and ephedrine sulfate. Antihistamines have also been used intravenously. Potassium levels should be monitored, particularly in patients on digitalis, since hypokalemia has been reported.

WARNING: To the Physician: This is a potent drug; indiscriminate use may result in serious undesirable reactions.

Before administering this product, physicians should familiarize themselves with the enclosed literature.

To the Pharmacist: When dispensing this product, include the following as part of the Rx labeling:

WARNING: Administration of this drug without the full knowledge of the patient may result in serious complications. 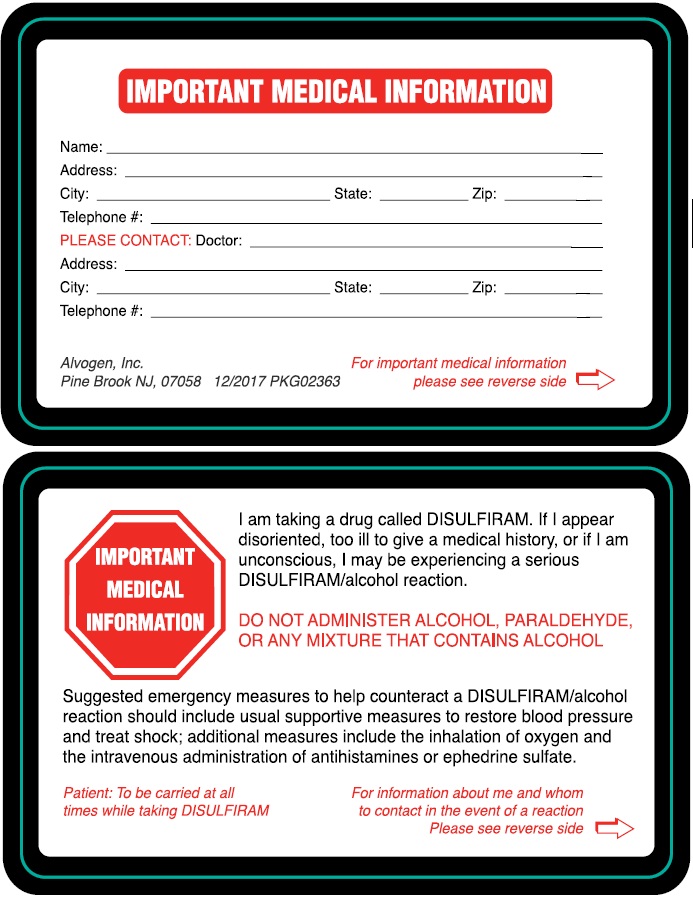