Granisetron hydrochloride is a white to off-white crystalline powder that is freely soluble in water and slightly soluble in methanol.

Serotonin receptors of the 5-HT3 type are located peripherally on vagal nerve terminals and centrally in the chemoreceptor trigger zone of the area postrema. During chemotherapy that induces vomiting, mucosal enterochromaffin cells release serotonin, which stimulates 5-HT3 receptors. This evokes vagal afferent discharge, inducing vomiting. Animal studies demonstrate that, in binding to 5-HT3 receptors, granisetron blocks serotonin stimulation and subsequent vomiting after emetogenic stimuli such as cisplatin. In the ferret animal model, a single granisetron injection prevented vomiting due to high-dose cisplatin or arrested vomiting within 5 to 30 seconds.

When granisetron tablets were administered with food, AUC was decreased by 5% and Cmax increased by 30% in non-fasted healthy volunteers who received a single dose of 10 mg.

Clearance is predominantly by hepatic metabolism. In normal volunteers, approximately 11% of the orally administered dose is eliminated unchanged in the urine in 48 hours. The remainder of the dose is excreted as metabolites, 48% in the urine and 38% in the feces.

In elderly and pediatric patients and in patients with renal failure or hepatic impairment, the pharmacokinetics of granisetron was determined following administration of intravenous granisetron.

The ranges of the pharmacokinetic parameters in elderly volunteers (mean age 71 years), given a single 40 mcg/kg intravenous dose of granisetron hydrochloride injection, were generally similar to those in younger healthy volunteers; mean values were lower for clearance and longer for half-life in the elderly.

Total clearance of granisetron was not affected in patients with severe renal failure who received a single 40 mcg/kg intravenous dose of granisetron hydrochloride injection.

A pharmacokinetic study in pediatric cancer patients (2 to 16 years of age), given a single 40 mcg/kg intravenous dose of granisetron hydrochloride injection, showed that volume of distribution and total clearance increased with age. No relationship with age was observed for peak plasma concentration or terminal phase plasma half-life. When volume of distribution and total clearance are adjusted for body weight, the pharmacokinetics of granisetron are similar in pediatric and adult cancer patients

Moderatly Emetogenic Chemotherapy
The first trial compared granisetron hydrochloride tablets  doses of 0.25 mg to 2 mg twice a day, in 930 cancer patients receiving, principally, cyclophosphamide, carboplatin, and cisplatin (20 mg/m2 to 50 mg/m2). Efficacy was based on complete response (i.e., no vomiting, no moderate or severe nausea, no rescue medication), no vomiting, and no nausea. Table 2 summarizes the results of this study.

Results from a granisetron hydrochloride tablets 2 mg daily alone treatment arm in a third double-blind, randomized trial, were compared to prochlorperazine (PCPZ), 10 mg bid, derived from a historical control. The 24 hour results for granisetron hydrochloride tablets 2 mg daily were statistically superior to PCPZ for all efficacy parameters: complete response (58%), no vomiting (79%), no nausea (51%), total control (49%). The PCPZ rates are shown in Table 3.


In a double-blind randomized study, 18 patients receiving granisetron hydrochloride tablets, 2 mg daily, experienced significantly greater antiemetic protection compared to patients in a historical negative control group who received conventional (non-5-HT3 antagonist) antiemetics. Total body irradiation consisted of 11 fractions of 120 cGy administered over 4 days, with three fractions on each of the first 3 days, and two fractions on the fourth day. Granisetron hydrochloride tablets were given one hour before the first radiation fraction of each day.

Twenty-two percent (22%) of patients treated with granisetron hydrochloride tablets did not experience vomiting or receive rescue antiemetics over the entire 4-day dosing period, compared to 0% of patients in the historical negative control group (p<0.01).

In addition, patients who received granisetron hydrochloride tablets also experienced significantly fewer emetic episodes during the first day of radiation and over the 4 day treatment period, compared to patients in the historical negative control group. The median time to the first emetic episode was 36 hours for patients who received granisetron hydrochloride tablets.

The efficacy of granisetron hydrochloride tablets, 2 mg daily, was evaluated in a double-blind, placebo-controlled randomized trial of 260 patients. granisetron hydrochloride tablets were given 1 hour before radiation, composed of up to 20 daily fractions of 180 to 300 cGy each. The exceptions were patients with seminoma or those receiving whole abdomen irradiation who initially received 150 cGy per fraction. Radiation was administered to the upper abdomen with a field size of at least 100 cm2.

The proportion of patients without emesis and those without nausea for granisetron hydrochloride tablets, compared to placebo, was statistically significant (p<0.0001) at 24 hours after radiation, irrespective of the radiation dose. Granisetron hydrochloride was superior to placebo in patients receiving up to 10 daily fractions of radiation, but was not superior to placebo in patients receiving 20 fractions.

Granisetron hydrochloride tablets USP are indicated for the prevention of:

Nausea and vomiting associated with initial and repeat courses of emetogenic cancer therapy, including high-dose cisplatin.


Granisetron hydrochloride is contraindicated in patients with known hypersensitivity to the drug or any of its components.


Granisetron is not a drug that stimulates gastric or intestinal peristalsis. It should not be used instead of nasogastric suction. The use of granisetron in patients following abdominal surgery or in patients with chemotherapy-induced nausea and vomiting may mask a progressive ileus and/or gastric distention.


An adequate QT assessment has not been conducted, but QT prolongation has been reported with granisetron. Therefore, granisetron should be used with caution in patients with pre-existing arrhythmias or cardiac conduction disorders, as this might lead to clinical consequences. Patients with cardiac disease, on cardio-toxic chemotherapy, with concomitant electrolyte abnormalities and/or on concomitant medications that prolong the QT interval are particularly at risk.

Granisetron does not induce or inhibit the cytochrome P-450 drug-metabolizing enzyme system in vitro. There have been no definitive drug-drug interaction studies to examine pharmacokinetic or pharmacodynamic interaction with other drugs; however, in humans, granisetron hydrochloride Injection has been safely administered with drugs representing benzodiazepines, neuroleptics, and anti-ulcer medications commonly prescribed with antiemetic treatments. Granisetron hydrochloride Injection also does not appear to interact with emetogenic cancer chemotherapies. Because granisetron is metabolized by hepatic cytochrome P-450 drug-metabolizing enzymes, inducers or inhibitors of these enzymes may change the clearance and, hence, the half-life of granisetron. No specific interaction studies have been conducted in anesthetized patients. In addition, the activity of the cytochrome P-450 subfamily 3A4 (involved in the metabolism of some of the main narcotic analgesic agents) is not modified by granisetron hydrochloride in vitro.

In in vitro human microsomal studies, ketoconazole inhibited ring oxidation of granisetron. However, the clinical significance of in vivo pharmacokinetic interactions with ketoconazole is not known. In a human pharmacokinetic study, hepatic enzyme induction with phenobarbital resulted in a 25% increase in total plasma clearance of intravenous granisetron. The clinical significance of this change is not known.

Because of the tumor findings in rat studies, granisetron hydrochloride should be prescribed only at the dose and for the indication recommended (see INDICATIONS AND USAGE, and DOSAGE AND ADMINISTRATION).


In patients receiving granisetron hydrochloride tablets 1 mg bid for 1, 7 or 14 days, or 2 mg daily for 1 day, adverse experiences reported in more than 5% of the patients with comparator and placebo incidences are listed in  Table 4.


Other adverse events reported in clinical trials were:
Gastrointestinal:In single-day dosing studies in which adverse events were collected for 7 days, nausea (20%) and vomiting (12%) were recorded as adverse events after the 24 hour efficacy assessment period.

Hepatic:In comparative trials, elevation of AST and ALT (>2 times the upper limit of normal) following the administration of granisetron hydrochloride tablets occurred in 5% and 6% of patients, respectively. These frequencies were not significantly different from those seen with comparators (AST: 2%; ALT: 9%).

Central Nervous System:Dizziness (5%), insomnia (5%), anxiety (2%), somnolence (1%). One case compatible with, but not diagnostic of, extrapyramidal symptoms has been reported in a patient treated with granisetron tablets.


Over 5000 patients have received injectable granisetron hydrochloride in clinical trials.

In the absence of a placebo group, there is uncertainty as to how many of these events should be attributed to granisetron, except for headache, which was clearly more frequent than in comparison groups.


In controlled clinical trials, the adverse events reported by patients receiving granisetron tablets and concurrent radiation were similar to those reported by patients receiving granisetron tablets prior to chemotherapy. The most frequently reported adverse events were diarrhea, asthenia, and constipation. Headache, however, was less prevalent in this patient population.


The recommended adult dosage of oral granisetron hydrochloride is 2 mg once daily or 1 mg twice daily. In the 2 mg once-daily regimen, two 1 mg tablets are given up to 1 hour before chemotherapy. In the 1 mg twice-daily regimen, the first 1 mg tablet is given up to 1 hour before chemotherapy, and the second tablet 12 hours after the first. Either regimen is administered only on the day(s) chemotherapy is given. Continued treatment, while not on chemotherapy, has not been found to be useful.

Use in the Elderly, Renal Failure Patients or Hepatically Impaired Patients

The recommended adult dosage of oral granisetron hydrochloride is 2 mg once daily. Two 1 mg tablets are taken within 1 hour of radiation.

No dosage adjustment is recommended.

Granisetron Hydrochloride Tablets USP are available as:
White colored, triangular shaped, biconvex, film-coated tablets with debossing of '1GN' on one side and plain surface on the other side.

Granisetron HCl tablets, USP are available as 20 Unit Dose Tablets (Intended for institutional use only) and 2’s pack.


Store between 20º to 25ºC (68º and 77ºF) [see USP Controlled Room Temperature]. Keep container closed tightly. Protect from light. Retain in carton until time of use.

Advise patients of the possibility of serotonin syndrome with concomitant use of granisetron and another serotonergic agent such as medications to treat depression and migraines. Advise patients to seek immediate medical attention if the following symptoms occur: changes in mental status, autonomic instability, neuromuscular symptoms with or without gastrointestinal symptoms.

This unit-dose package is not-child-resistant.
For institutional use only.

Storage between 20° and 25°(68° and 77°F) [see USP Controlled Room Temperature]. protect from light. Retain in carton until time of use. 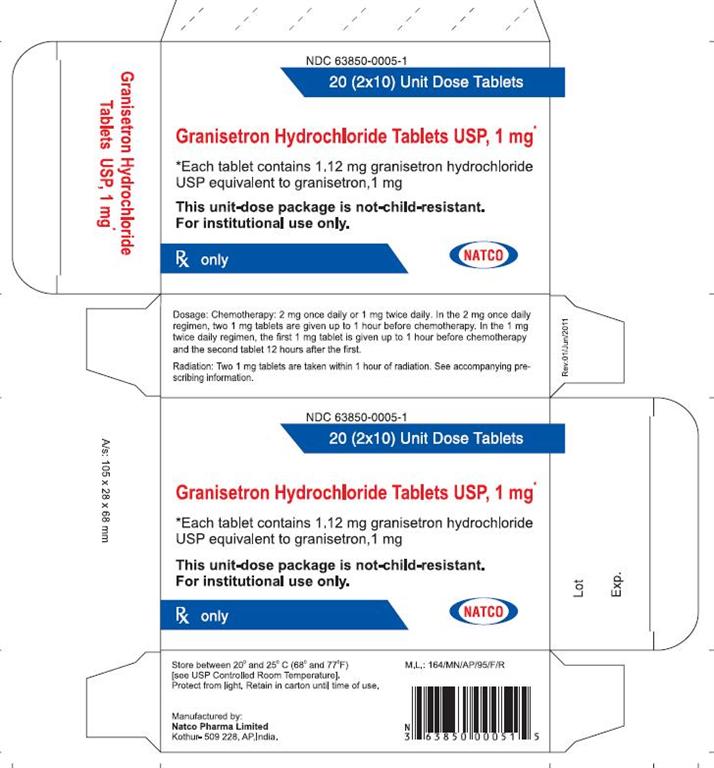 This unit-dose package is not-child-resistant.

Storage between 20° and 25°(68° and 77°F) [see USP Controlled Room Temperature]. protect from light. Retain in carton until time of use. 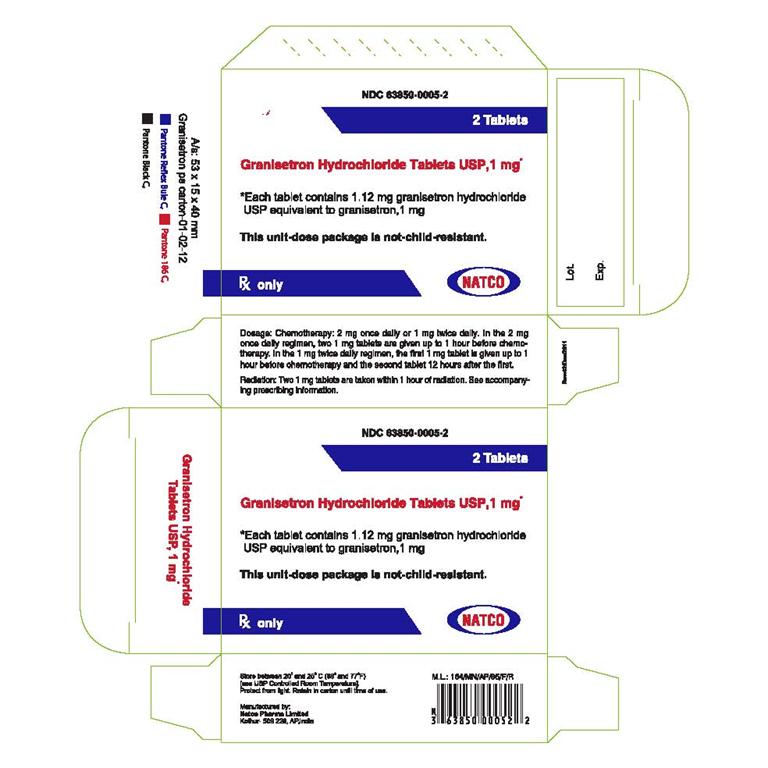