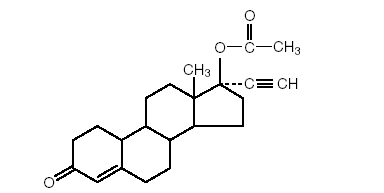 Norethindrone acetate induces secretory changes in an estrogen-primed endometrium. On a weight basis, it is twice as potent as norethindrone.

The effect of food administration on the pharmacokinetics of norethindrone acetate has not been studied.

Norethindrone undergoes extensive biotransformation, primarily via reduction, followed by sulfate and glucuronide conjugation. The majority of metabolites in the circulation are sulfates, with glucuronides accounting for most of the urinary metabolites.

Norethindrone acetate is indicated for the treatment of secondary amenorrhea, endometriosis, and abnormal uterine bleeding due to hormonal imbalance in the absence of organic pathology, such as submucous fibroids or uterine cancer. Norethindrone acetate is not intended, recommended or approved to be used with concomitant estrogen therapy in postmenopausal women for endometrial protection.

•
Known or suspected pregnancy. There is no indication for norethindrone acetate in pregnancy. (See PRECAUTIONS ).
•
Undiagnosed vaginal bleeding
•
Known, suspected or history of cancer of the breast
•
Active deep vein thrombosis, pulmonary embolism or history of these conditions
•
Active or recent (e.g., within the past year) arterial thromboembolic disease (e.g., stroke, myocardial infarction)
•
Impaired liver function or liver disease
•
As a diagnostic test for pregnancy
•
Hypersensitivity to any of the drug components

Discontinue medication pending examination if there is a sudden partial or complete loss of vision or if there is sudden onset of proptosis, diplopia, or migraine. If examination reveals papilledema or retinal vascular lesions, medication should be discontinued.

•
Because this drug may cause some degree of fluid retention, conditions which might be influenced by this factor, such as epilepsy, migraine, cardiac or renal dysfunctions, require careful observation
•
In cases of breakthrough bleeding, and in all cases of irregular bleeding per vagina, nonfunctional causes should be borne in mind. In cases of undiagnosed vaginal bleeding, adequate diagnostic measures are indicated
•
Patients who have a history of clinical depression should be carefully observed and the drug discontinued if the depression recurs to a serious degree
•
Data suggest that progestin therapy may have adverse effects on lipid and carbohydrate metabolism. The choice of progestin, its dose, and its regimen may be important in minimizing these adverse effects, but these issues will require further study before they are clarified. Women with hyperlipidemias and/or diabetes should be monitored closely during progestin therapy
•
The pathologist should be advised of progestin therapy when relevant specimens are submitted

Healthcare providers are advised to discuss the PATIENT INFORMATION leaflet with patients for whom they prescribe norethindrone acetate.

The following laboratory test results may be altered by the use of estrogen/progestin combination drugs:

Some beagle dogs treated with medroxyprogesterone acetate developed mammary nodules. Although nodules occasionally appeared in control animals, they were intermittent in nature, whereas nodules in treated animals were larger and more numerous, and persisted. There is no general agreement as to whether the nodules are benign or malignant. Their significance with respect to humans has not been established.

Norethindrone acetate is contraindicated during pregnancy as it may cause fetal harm when administered to pregnant women. Several reports suggest an association between intrauterine exposure to progestational drugs in the first trimester of pregnancy and congenital abnormalities in male and female fetuses. Some progestational drugs induce mild virilization of the external genitalia of female fetuses.

Detectable amounts of progestins have been identified in the milk of mothers receiving them. Caution should be exercised when progestins are administered to a nursing woman.

Norethindrone acetate tablets are not indicated in children.

See WARNINGS and PRECAUTIONS The following adverse reactions have been observed in women taking progestins:

Therapy with norethindrone acetate must be adapted to the specific indications and therapeutic response of the individual patient.

Secondary amenorrhea, abnormal uterine bleeding due to hormonal imbalance in the absence of organic pathology:

2.5 to 10 mg norethindrone acetate may be given daily for 5 to 10 days to produce secretory transformation of an endometrium that has been adequately primed with either endogenous or exogenous estrogen.

5 mg : White to off-white oval, flat faced beveled edged, uncoated tablets debossed with ‘G with breakline’ on one side and 304 on other side.

What is the most important information I should know about norethindrone acetate (A Progestin Hormone) tablets?

What is norethindrone acetate?

What are norethindrone acetate tablets used for?

Who should not take norethindrone acetate tablets?

You should not tke norethindrone acetate tablets if you are postmenopausal, pregnant or breast-feeding.

You should not take norethindrone acetate tablets if you have the following conditions:

What are the risks associated with norethindrone acetate tablets?

•
Risk to the Fetus:
Norethindrone acetate tablets should not be used if you are pregnant. Norethindrone acetate tablets are contraindicated during pregnancy as it may cause fetal harm when administered to pregnant women. There is an increased risk of minor birth defects in children whose mothers take this drug during the first 4 months of pregnancy. Several reports suggest an association between mothers who take these drugs in the first trimester of pregnancy and congenital abnormalities in male and female babies. Although it is not clear that these events were drug related, you should check with your healthcare provider about the risks to your unborn child of any medication taken during pregnancy.
You should avoid using norethindrone acetate tablets during pregnancy. If you take norethindrone acetate tablets and later find you were pregnant when you took it, be sure to discuss this with your healthcare provider as soon as possible.
•
Abnormal Blood Clotting:
Use of progestational drugs, such as norethindrone acetate, has been associated with changes in the blood-clotting system. These changes allow the blood to clot more easily, possibly allowing clots to form in the bloodstream. If blood clots do form in your bloodstream, they can cut off the blood supply to vital organs, causing serious problems. These problems may include a stroke (by cutting off blood to part of the brain), a heart attack (by cutting off blood to part of the heart), a pulmonary embolus (by cutting off blood to part of the lungs), visual loss or blindness (by cutting off blood vessels in the eye), or other problems. Any of these conditions may cause death or serious long-term disability. Call your healthcare provider right away if you suspect you have any of these conditions. He or she may advise you to stop using the drug.
•
Eye Abnormalities:
Discontinue norethindrone acetate tablets and call your healthcare provider right away if you experience sudden partial or complete loss of vision, blurred vision, or sudden onset of bulging eyes, double vision, or migraine.

These are some of the warning signs of serious side effects with progestin therapy:

Call your healthcare provider right away if you get any of these warning signs, or any other unusual symptom that concerns you.

Common side effects include:

Other side effects include:

These are not all the possible side effects of progestin and/or estrogen therapy. For more information, ask your healthcare provider or pharmacist.

What can I do to lower my chances of getting a serious side effect with norethindrone acetate?

General information about the safe and effective use of norethindrone acetate tablets:

Keep norethindrone acetate tablets out of the reach of children.

This leaflet provides a summary of the most important information about progestin and/or estrogen therapy. If you would like more information, talk with your healthcare provider or pharmacist. You can ask for information about norethindrone acetate that is written for health professionals.

What are the ingredients in norethindrone acetate tablets?