ADIPEX-P ® is indicated as a short-term (a few weeks) adjunct in a regimen of weight reduction based on exercise, behavioral modification and caloric restriction in the management of exogenous obesity for patients with an initial body mass index greater than or equal to 30 kg/m 2, or greater than or equal to 27 kg/m 2 in the presence of other risk factors (e.g., controlled hypertension, diabetes, hyperlipidemia). 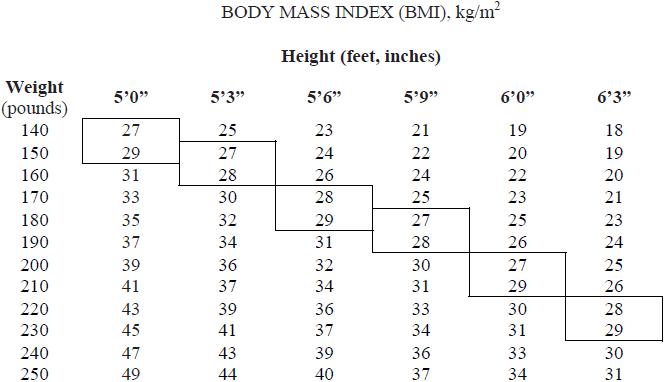 The limited usefulness of agents of this class, including ADIPEX-P ®, [ see Clinical Pharmacology ( 12.1, 12.2) ] should be measured against possible risk factors inherent in their use such as those described below.

The usual adult dose is one capsule (37.5 mg) daily as prescribed by the physician, administered before breakfast or 1 to 2 hours after breakfast for appetite control.

The usual adult dose is one tablet (37.5 mg) daily as prescribed by the physician, administered before breakfast or 1 to 2 hours after breakfast. The dosage may be adjusted to the patient’s need. For some patients, half tablet (18.75 mg) daily may be adequate, while in some cases it may be desirable to give half tablets (18.75 mg) two times a day.

ADIPEX-P ® is not recommended for use in pediatric patients less than or equal to 16 years of age.

ADIPEX-P ® is indicated only as short-term (a few weeks) monotherapy for the management of exogenous obesity. The safety and efficacy of combination therapy with ADIPEX-P ® and any other drug products for weight loss including prescribed drugs, over-the-counter preparations, and herbal products, or serotonergic agents such as selective serotonin reuptake inhibitors (e.g., fluoxetine, sertraline, fluvoxamine, paroxetine), have not been established. Therefore, coadministration of ADIPEX-P ® and these drug products is not recommended.

Primary Pulmonary Hypertension (PPH) – a rare, frequently fatal disease of the lungs – has been reported to occur in patients receiving a combination of phentermine with fenfluramine or dexfenfluramine. The possibility of an association between PPH and the use of ADIPEX-P ® alone cannot be ruled out; there have been rare cases of PPH in patients who reportedly have taken phentermine alone. The initial symptom of PPH is usually dyspnea. Other initial symptoms may include angina pectoris, syncope or lower extremity edema. Patients should be advised to report immediately any deterioration in exercise tolerance. Treatment should be discontinued in patients who develop new, unexplained symptoms of dyspnea, angina pectoris, syncope or lower extremity edema, and patients should be evaluated for the possible presence of pulmonary hypertension.

Serious regurgitant cardiac valvular disease, primarily affecting the mitral, aortic and/or tricuspid valves, has been reported in otherwise healthy persons who had taken a combination of phentermine with fenfluramine or dexfenfluramine for weight loss. The possible role of phentermine in the etiology of these valvulopathies has not been established and their course in individuals after the drugs are stopped is not known. The possibility of an association between valvular heart disease and the use of ADIPEX-P ® alone cannot be ruled out; there have been rare cases of valvular heart disease in patients who reportedly have taken phentermine alone.

ADIPEX-P ® may impair the ability of the patient to engage in potentially hazardous activities such as operating machinery or driving a motor vehicle; the patient should therefore be cautioned accordingly.

ADIPEX-P ® is related chemically and pharmacologically to amphetamine (d- and d ll-amphetamine) and to other related stimulant drugs that have been extensively abused. The possibility of abuse of ADIPEX-P ® should be kept in mind when evaluating the desirability of including a drug as part of a weight reduction program. See Drug Abuse and Dependence ( 9) and Overdosage ( 10) .

Concomitant use of alcohol with ADIPEX-P ® may result in an adverse drug reaction.

Use caution in prescribing ADIPEX-P ® for patients with even mild hypertension (risk of increase in blood pressure).

Use of ADIPEX-P ® is contraindicated during or within 14 days following the administration of monoamine oxidase inhibitors because of the risk of hypertensive crisis.

Concomitant use of alcohol with ADIPEX-P ® may result in an adverse drug reaction.

Requirements may be altered [ see Warnings and Precautions ( 5.9) ].

ADIPEX-P ® is contraindicated during pregnancy because weight loss offers no potential benefit to a pregnant woman and may result in fetal harm. A minimum weight gain, and no weight loss, is currently recommended for all pregnant women, including those who are already overweight or obese, due to obligatory weight gain that occurs in maternal tissues during pregnancy. Phentermine has pharmacologic activity similar to amphetamine (d- and d ll-amphetamine) [ see Clinical Pharmacology ( 12.1) ]. Animal reproduction studies have not been conducted with phentermine. If this drug is used during pregnancy, or if the patient becomes pregnant while taking this drug, the patient should be apprised of the potential hazard to a fetus.

It is not known if ADIPEX-P ® is excreted in human milk; however, other amphetamines are present in human milk. Because of the potential for serious adverse reactions in nursing infants, a decision should be made whether to discontinue nursing or to discontinue the drug, taking into account the importance of the drug to the mother.

Based on the reported excretion of phentermine in urine, exposure increases can be expected in patients with renal impairment [ see Clinical Pharmacology ( 12.3) ].

Abuse of amphetamines and related drugs may be associated with intense psychological dependence and severe social dysfunction. There are reports of patients who have increased the dosage of these drugs to many times that recommended. Abrupt cessation following prolonged high dosage administration results in extreme fatigue and mental depression; changes are also noted on the sleep EEG. Manifestations of chronic intoxication with anorectic drugs include severe dermatoses, marked insomnia, irritability, hyperactivity and personality changes. A severe manifestation of chronic intoxication is psychosis, often clinically indistinguishable from schizophrenia.

Management of acute phentermine hydrochloride intoxication is largely symptomatic and includes lavage and sedation with a barbiturate. Experience with hemodialysis or peritoneal dialysis is inadequate to permit recommendations in this regard. Acidification of the urine increases phentermine excretion. Intravenous phentolamine (Regitine ®, CIBA) has been suggested on pharmacologic grounds for possible acute, severe hypertension, if this complicates overdosage.

Phentermine hydrochloride, USP is a white, odorless, hygroscopic, crystalline powder which is soluble in water and lower alcohols, slightly soluble in chloroform and insoluble in ether.

ADIPEX-P ® is a sympathomimetic amine with pharmacologic activity similar to the prototype drugs of this class used in obesity, amphetamine (d- and d ll-amphetamine). Drugs of this class used in obesity are commonly known as “anorectics” or “anorexigenics.” It has not been established that the primary action of such drugs in treating obesity is one of appetite suppression since other central nervous system actions, or metabolic effects, may also be involved.

Cumulative urinary excretion of phentermine under uncontrolled urinary pH conditions was 62% to 85%.

Systemic exposure of phentermine may increase up to 91%, 45%, and 22% in patients with severe, moderate, and mild renal impairment, respectively [ see Dosage and Administration ( 2.2) and Use in Specific Populations ( 8.6) ].

No clinical studies have been conducted with ADIPEX-P ®.

Patients must be informed that ADIPEX-P ® is a short-term (a few weeks) adjunct in a regimen of weight reduction based on exercise, behavioral modification and caloric restriction in the management of exogenous obesity, and that coadministration of phentermine with other drugs for weight loss is not recommended [ see Indications and Usage ( 1) and Warnings and Precautions ( 5) ].

Patients must be instructed on how much ADIPEX-P ® to take, and when and how to take it [ see Dosage and Administration ( 2) ].

See also, for example, Adverse Reactions ( 6) and Use in Specific Populations ( 8) .

Tell patients to keep ADIPEX-P ® in a safe place to prevent theft, accidental overdose, misuse or abuse. Selling or giving away ADIPEX-P ® may harm others and is against the law.

Brands listed are the trademarks of their respective owners. 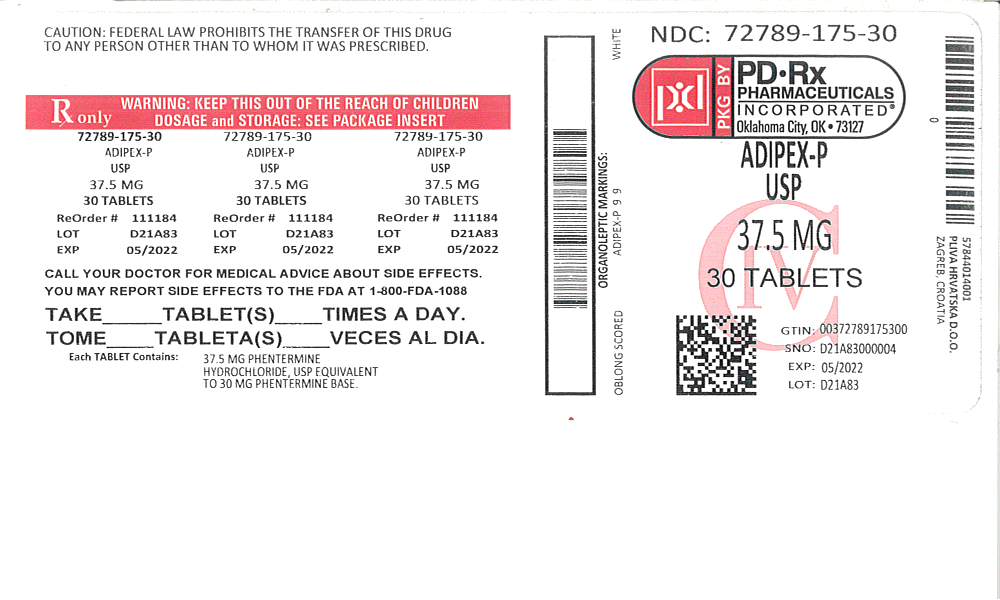