Phentermine is a sympathomimetic amine with pharmacologic activity similar to the prototype drugs of this class used in obesity, amphetamine (d- and dll-amphetamine). Drugs of this class used in obesity are commonly known as “anorectics” or “anorexigenics.” It has not been established that the primary action of such drugs in treating obesity is one of appetite suppression since other central nervous system actions, or metabolic effects, may also be involved.

LOMAIRA™ tablets are indicated as a short-term (a few weeks) adjunct in a regimen of weight reduction based on exercise, behavioral modification and caloric restriction in the management of exogenous obesity in patients with an initial body mass index greater than or equal to 30 kg/m 2, or greater than or equal to 27 kg/m 2 in the presence of other risk factors (e.g., controlled hypertension, diabetes, hyperlipidemia).

The limited usefulness of agents of this class, including phentermine (see Clinical Pharmacology), should be measured against possible risk factors inherent in their use such as those described below.

Coadministration with Other Drug Products for Weight Loss

LOMAIRA™ tablets are indicated only as short-term (a few weeks) monotherapy for the management of exogenous obesity. The safety and efficacy of combination therapy with phentermine and any other drug products for weight loss including prescribed drugs, over-the-counter preparations, and herbal products, or serotonergic agents such as selective serotonin reuptake inhibitors (e.g., fluoxetine, sertraline, fluvoxamine, paroxetine), have not been established. Therefore, coadministration of phentermine and these drug products is not recommended.

Effect on the Ability to Engage in Potentially Hazardous Tasks

Risk of Abuse and Dependence

Phentermine is related chemically and pharmacologically to amphetamine (d- and dll-amphetamine) and other related stimulant drugs have been extensively abused. The possibility of abuse of phentermine should be kept in mind when evaluating the desirability of including a drug as part of a weight reduction program. See Adverse Reactions/ Drug Abuse and Dependence and Overdosage.

Use in Patients with Hypertension

Patients must be informed that phentermine hydrochloride is a short-term (a few weeks) adjunct in a regimen of weight reduction based on exercise, behavioral modification and caloric restriction in the management of exogenous obesity, and that coadministration of phentermine with other drugs for weight loss is not recommended (see  Indications and Usage and Warnings).

Patients must be instructed on how much phentermine to take, and when and how to take it (see Dosage and Administration).

Advise pregnant women and nursing mothers not to use phentermine (see  Precautions).

Requirements may be altered (see Warnings)

Phentermine is contraindicated during pregnancy because weight loss offers no potential benefit to a pregnant woman and may result in fetal harm. A minimum weight gain, and no weight loss, is currently recommended for all pregnant women, including those who are already overweight or obese, due to obligatory weight gain that occurs in maternal tissues during pregnancy. Phentermine has pharmacologic activity similar to amphetamine (d- and dll-amphetamine) (see Clinical Pharmacology ). Animal reproduction studies have not been conducted with phentermine. If this drug is used during pregnancy, or if the patient becomes pregnant while taking this drug, the patient should be apprised of the potential hazard to a fetus.

Management of acute phentermine hydrochloride intoxication is largely symptomatic and includes lavage and sedation with a barbiturate. Experience with hemodialysis or peritoneal dialysis is inadequate to permit recommendations in this regard. Acidification of the urine increases phentermine excretion. Intravenous phentolamine (Regitine ®, CIBA) has been suggested on pharmacologic grounds for possible acute, severe hypertension, if this complicates overdosage.

Dosage should be individualized to obtain an adequate response with the lowest effective dose.
The usual adult dose is one tablet three times a day ½ hour before meals. This tablet is scored to facilitate administering one half of the usual dosage for patients not requiring the full dose. Phentermine hydrochloride is not recommended for use in pediatric patients less than or equal to 16 years of age.

HOW SUPPLIED/STORAGE AND HANDLING

LOMAIRA™ is available as follows:

LOMAIRA™ 8 mg is supplied as white butterfly shaped tablets with blue speckles, debossed “K1” on one side and bisected on the other side. 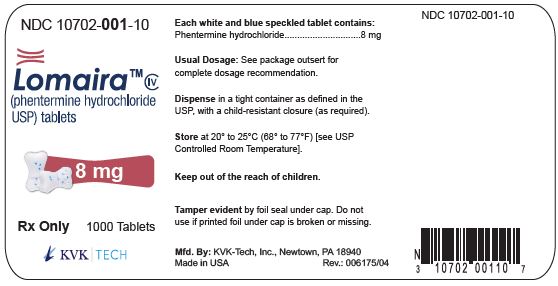